It took me some time to edit the video but here it is. Real footage from the New Year party:
https://www.youtube.com/watch?v=gwOBjdedOrc
Roses are red, violets are blue. Omae wa mou shindeiru.

Cheers to everyone that attended our bicentennial party on Thursday, December 30! It was more than I had hoped for, and then some. What better way to pay homage to the original just test server then by commemorating 200 years with pure chaos and destruction!

Given that a new century is such a rare occurrence (it only rolls around every 500 days), I overhauled spawn with the addition of two castle towers, designed by the one and only Administrator -- a hacker that was banned by maikerumine in the first weeks of JT2. 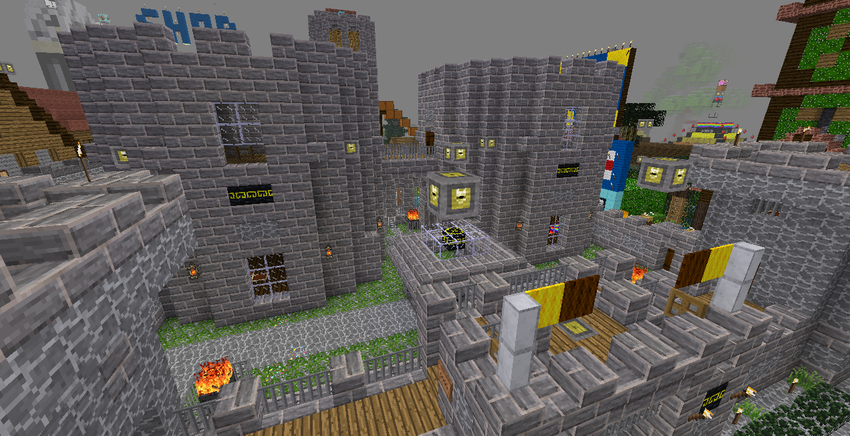 The entire spawn plaza was also transformed into an open sandbox, allowing players to build or mine to their heart's content. With the arrival of the new century, however, protection at spawn was completely disabled -- so everything could seized. 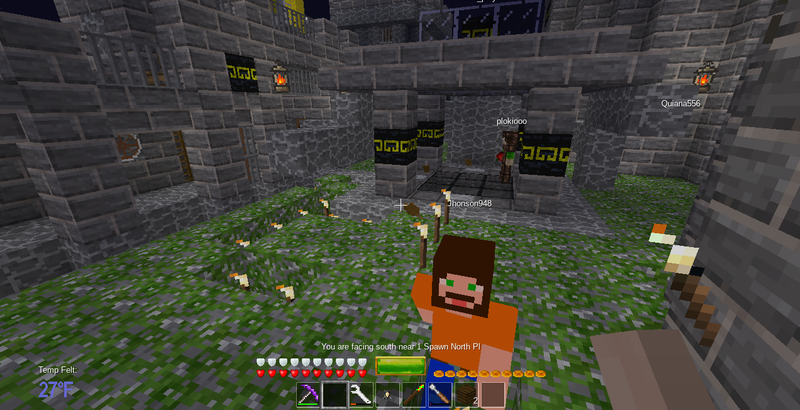 Inside both castle towers were a variety of locked chests -- some filled with valuables, others filled with junk. The southern tower also included a giant Nyan Cat sculpture. A few players tried to stake their claim beforehand, ready to plunder what they could! 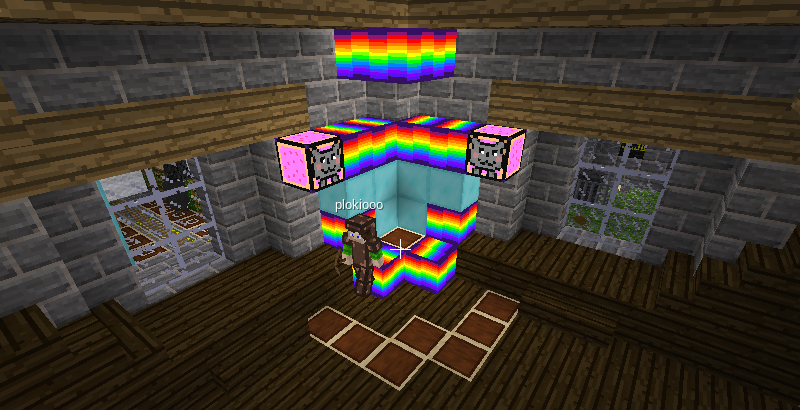 To build up hype for the main event, Nemo also staged a pastry explosion and monster frenzy at spawn. There were enough muffins and donuts served to give everybody heartburn for weeks to come. 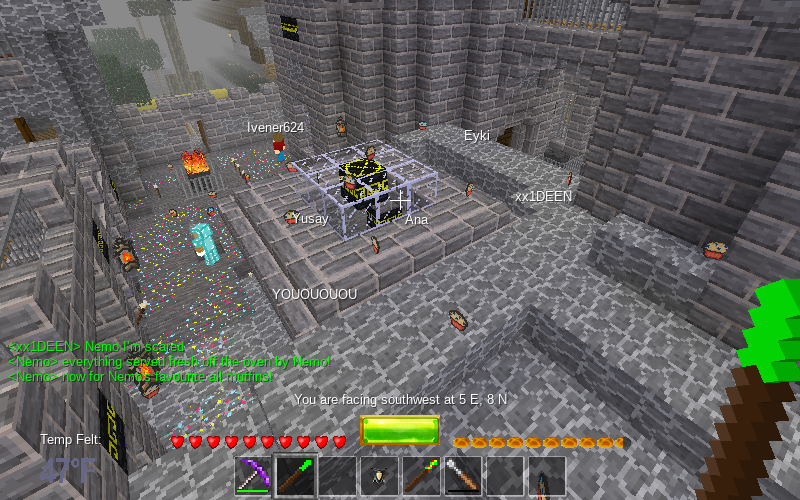 Of course, Wuzzy and iisu took the opportunity to drop an assortment of their own goodies for the n00bs to indulge in, from bread and potatoes to the recently introduced ice cream and chilled drinks! 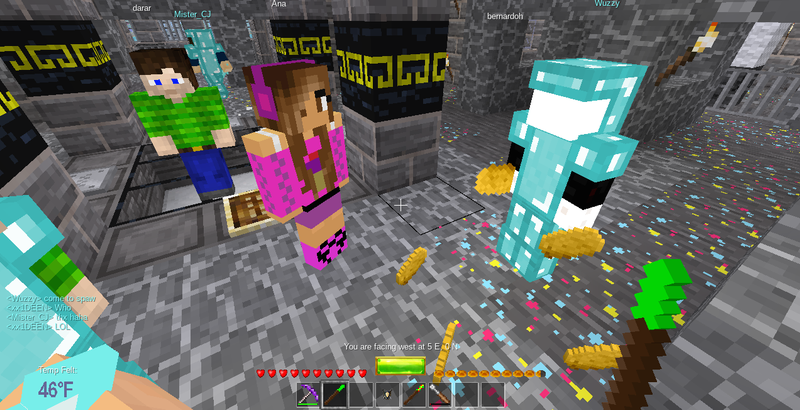 Once the monster mash was underway, however, all players had to be on their best defenses. Spawn was quickly overrun by hundreds of zombies, ghosts, spiders, bats, and other creatures of the night. 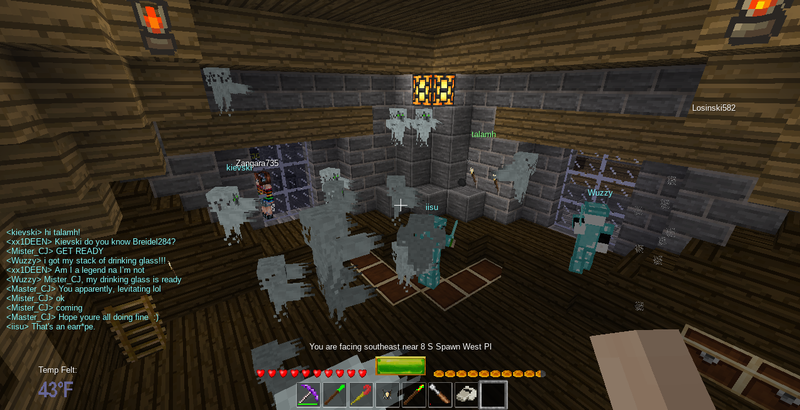 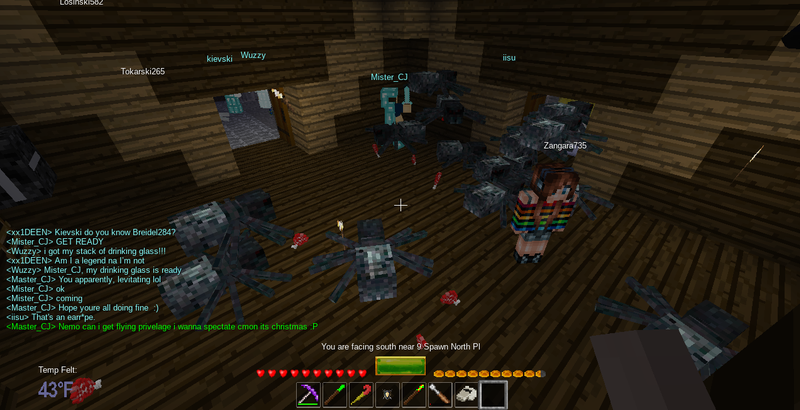 As the countdown clock approached midnight, players grabbed their confetti cannons and party horns. This place was about to get LIT! 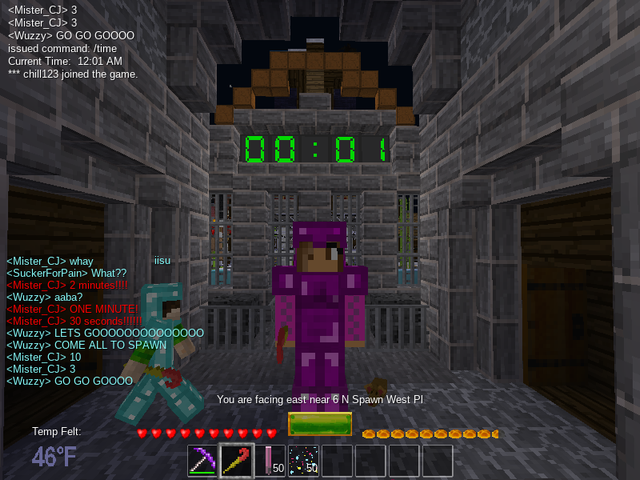 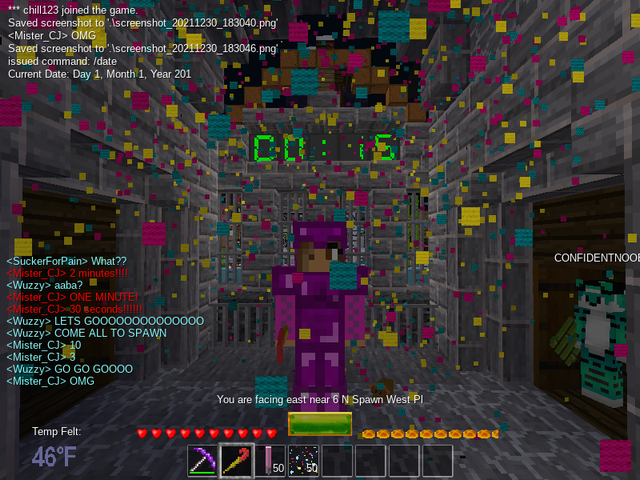 The Phoenix Rising officially began the following night. Four players sought to vanquish the legendary beast: Wuzzy, SuckerForPain, Mister_CJ, and iisu. While attacking the Phoenix for its loot was quickly mastered, actually luring it inside the castle towers to blast open the locked chests proved to be a more difficult task. But thanks to some teamwork, everyone made off with plenty of riches! 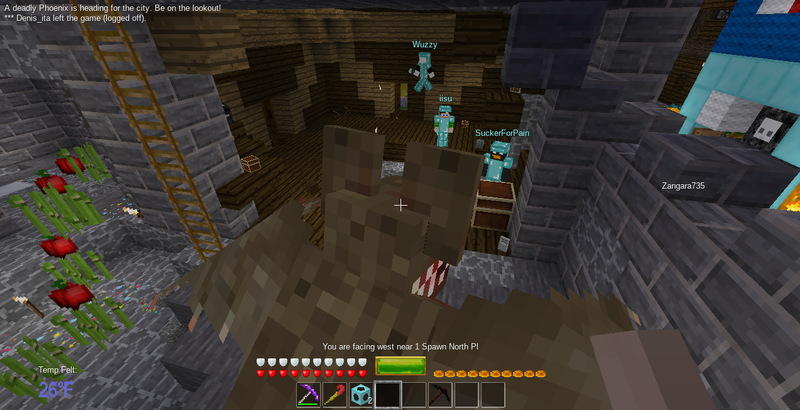 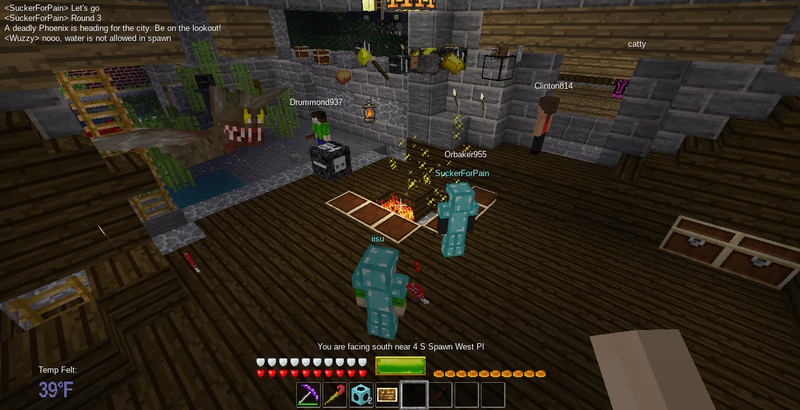 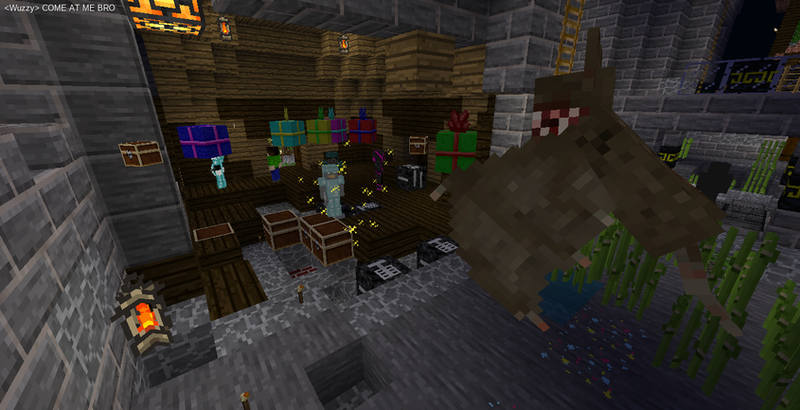 And thus with the land of JT2 left in ruins from the 200 year Phoenix Rising, we prepare to rebuild anew in a glorious new age of progress and innovation. Cheers! 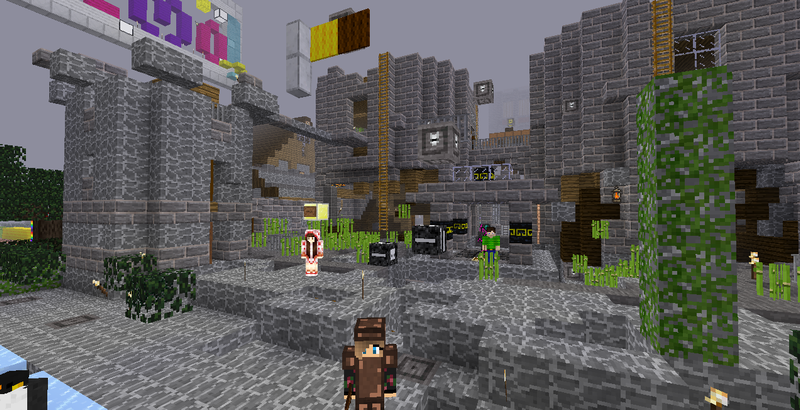 Thanks to all of the regulars and newcomers that participated, making this once-in-a-century event a HUGE success!

Three cheers to all of our players for making this NYE celebration extra hype!

We hosted two separate countdowns, for both our European and American visitors. However, due to a mixup with the timezones, I ended up rescheduling the second event for the Central U.S. instead of the Eastern U.S. But that worked out for the best, since we got a much bigger turnout by waiting the extra hour! 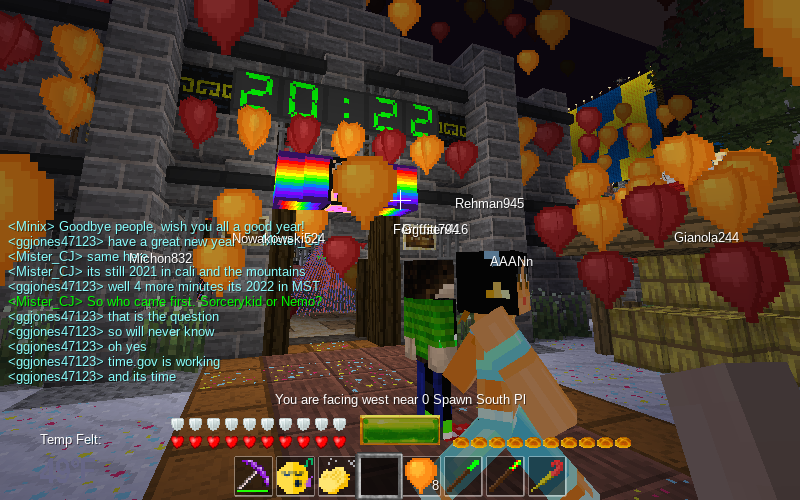 At the stroke of midnight, there was a massive balloon drop followed by a brilliant fireworks show. But the highlight of the evening was our first ever afterparty hosted at Club Nemo! A bunch of folks came out to mingle with friends and to show off their dance moves. 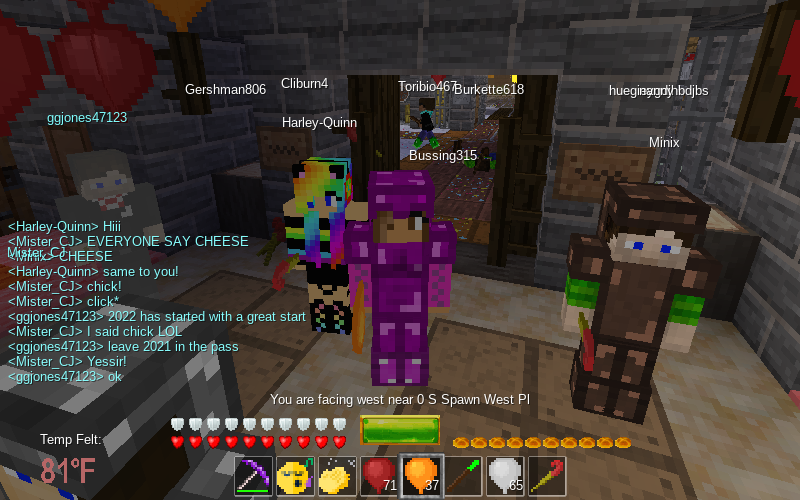 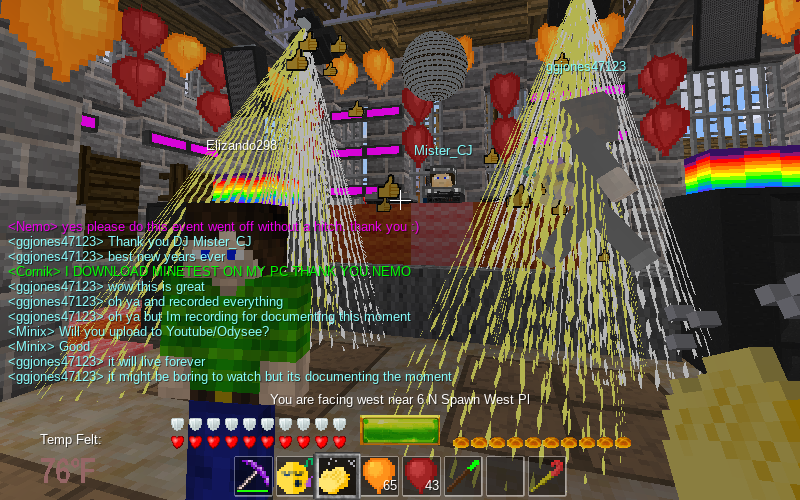 Huge kudos to our very own Mister_CJ, the DJ whom rocked the decks from dusk till dawn -- and then straight into the next night. He's a non-stop machine, and we can't wait to see him perform again! 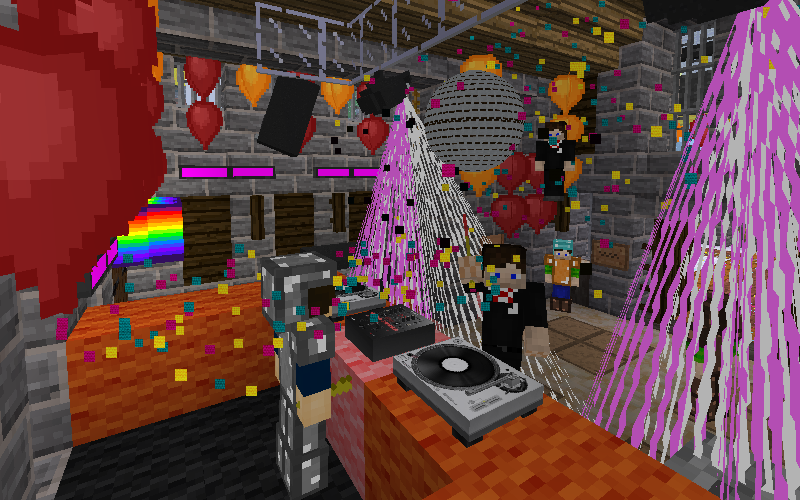 As is our annual tradition on JT2, we lined up atop the giant marquee afterward for a reunion photo. Although this year's celebration had fewer regulars than usual, we still saw many new faces, which is always reassuring! 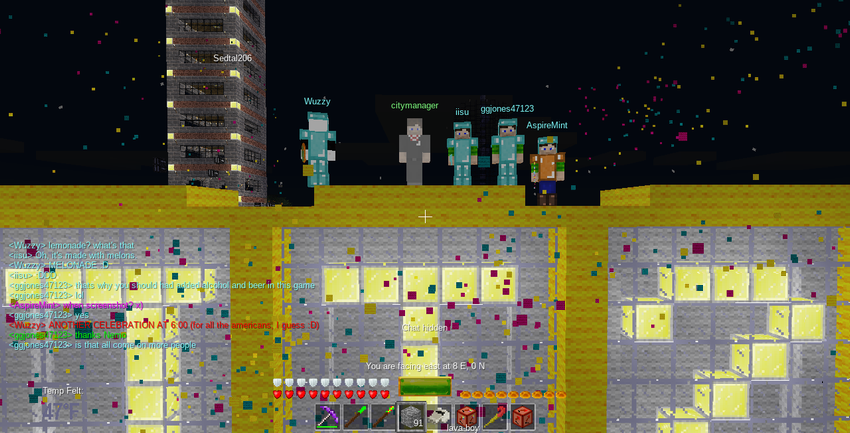 I didn't take nearly as many photos as I have the past, but I was recording the entire event. Evidently I'm not the only one either. It turns out that AspireMint and ggjones47123 had the same idea! Hopefully they'll share their footage here at some point as well :)

Today I am here to announce the footage of the three JT2 New Years Parties.

Why three?
The original idea was to have two parties that was one for Europe(UTC-0) and one for US(UTC-5). The Europe party went great but the time for the US party had a missed understanding(either UTC-5 or UTC-6) and we didn't want anyone to miss the US party so Sorcerykid decided to move the party to CST. The chat from the EST video will explain it better then I can 10 days later. We did have a EST as seem from the video since we were all there anyway.

Idea in the moment
This was truly an idea in the moment when I was at the Europe party. I just installed OBS and went with the default video options then quickly recorded. Now the first half of the Europe party is forever loss in video sense anyway but memory is still there. But I was ready for the other parties and that's why it was captured.

Finally the videos
Here is the part that you all been waiting for. The Videos!!!!!!!

The channel I uploaded on is now my video dump channel so don't expect me actively making videos. I created this channel about a week ago anyway.

Bonus Fact
I believe this is the first JT2 New Years party filmed(maybe maikerumine filmed the party years ago but from a quick search I found nothing).

What Now
Yes I will be filming the next New years parties so they will be remembered not just memory but in video too.

As some of you noticed, more specialty foods and drinks have recently been added to the game thanks to iisu. Here's a rundown of what's currently available (note this list doesn't include mob drops).

Besides being a refreshing beverage, Apple Juice, Orange Juice, Raspberry Juice, Blueberry Juice, and Lemonade give a 30-second chill effect. It's a great way to keep cool during those hot summer days!

The perfect frozen snack for those dangerously hot encounters, Bluebbery Ice Cream, Raspberry Ice Cream, and Chocolate Ice Cream will give you a 30 second freeze. Perfect for mining in lava caves! 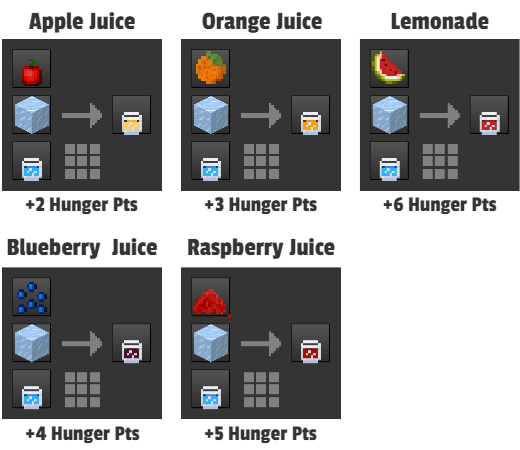 Of course it's always important to stay hydrated too! So quench your thirst with a refreshing glass of water. To obtain a Glass of Water, use an empty glass on a river water node. The Glass of Water provides a moderate cooldown effect, but only 1 hunger point.

Note: The addition of drink effects to the Basic Survival mod is still experimental, and this feature is likely to be tweaked as necessary over the coming weeks. The hunger points for the items shown above are subject to change as well.

It seems that collecting hard-to-find items is becoming a sort of competition amongst players on the JT2 server these past few weeks. Some are even dealing and trading in such rarities, creating an underground marketplace of sorts!

IMS_BULLDOGS shows off a couple of exotic finds from someone's bones. 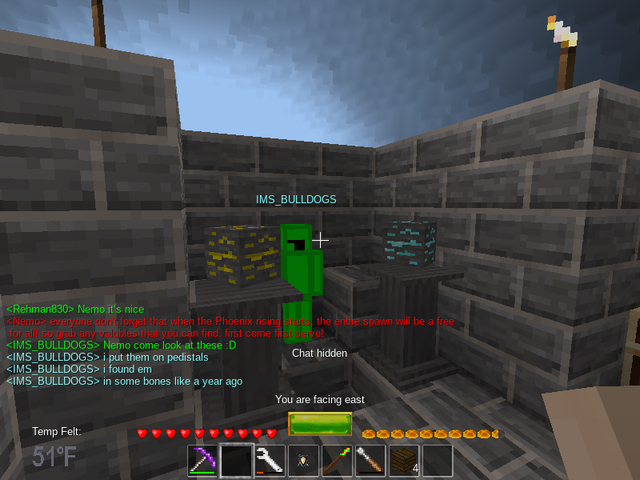 Mister_CJ proudly displays a collection of novelties in his Hall of Rare Items. 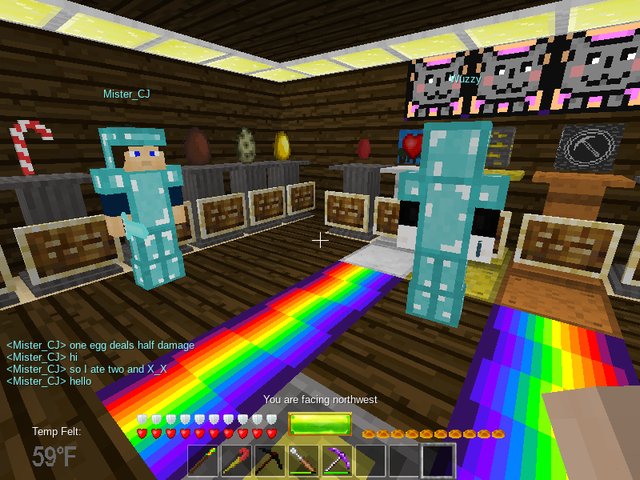 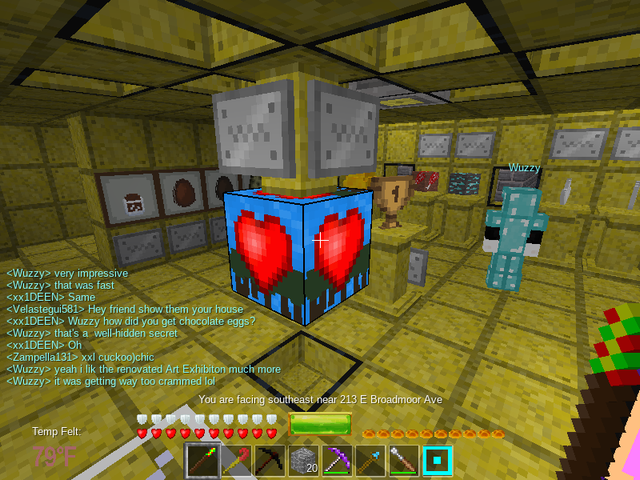 Just a quick heads up, all doors and trapdoors now support multiple closing and locking modes via the wrench tool. This should afford more consistency when building with a variety of doors, all requiring the same feature set.

Originally, I had wanted certain doors to be more fully-featured than others, just so that they could have more intrinsic value. But now I realize that it's probably more confusing than it's worth to maintain those seemingly arbitrary distinctions.

On a sidenote, at some point I will probably be deprecating protected doors and trapdoors as those are legacy nodes that don't support the Doors Redux API at all. The functionality of shared locking can already be achieved now with all regular doors and trapdoors..

Wooden trapdoors still don't support locking modes. Other than that, the wrench seems to work for everything.

How will the protected [trap]doors be deprecated?
My Minetest creations. My webcomic. Follow me in the Fediverse! 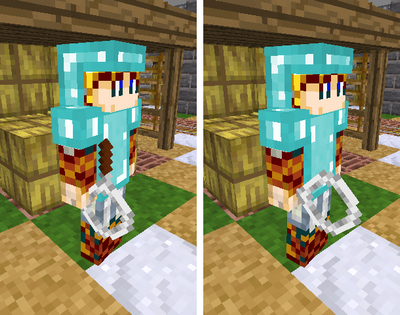 Hey all, I rotated the wieldview of the Mangifier tool so it now appears oriented correctly in the hand. If you notice any other tools that have the wrong orientation, please notify me so that I can make adjustments as necessary.

In other maintenance and administration news...

I made a map of the Neko Park construction site: 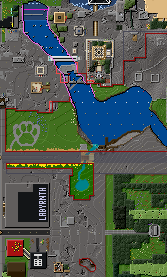 Red line is the land borders.
Light red whatever that is are border disputes.
Magenta is the border on water.
Pink lines are coastal disputes.
Gray is where I'm considering expansion (the land is already claimed).
And the gray overlayed area is a planned custom public road.

I used the daily map rendering from the website which only reaches to 750m away from spawn, so a part of the land is outside the map (at the furthest point, it touches the planned road at 800, and there's another area I'm considering on the other side of the road).
Roses are red, violets are blue. Omae wa mou shindeiru.
Post Reply
1561 posts