SmartDen wrote:Hi! Im pretty new on this server. Is there a chance to meet ADMIN online? I have some questions for him. Maybe we can solve it here.

Hello! I fixed your chest issue, as well as some of those tracks near you. :)

Thank you! Pity that my inventory is lost :( Had some nice stones there. But thanks anyway :)

Just send maikerumine a PM and tell him what all is lost, and I'm sure he will give it to you.
God's not dead! -- My Discord Server, My GitLab Account, My Mods, Favorite Servers, Youtube Channel

Maike, why did you decide to remove pigs and meat which animals can drop?
Blue who loves you all but mostly someone :)

Oh, so that's the unknown items I threw in the trash...
God's not dead! -- My Discord Server, My GitLab Account, My Mods, Favorite Servers, Youtube Channel

Oh, so that's the unknown items I threw in the trash...

yep :)
Blue who loves you all but mostly someone :)

it has been lots of months.... do u think i had enough for my mistake....
i tried others servers to play but all the server's were bad...
i love your server the most..... with awesome mods in it
i can tell u soo many ''sorry's''

I WONT DO ANYTHING AGAIN , even LILLY was calm with me now , i used to play on his server and its boring
Maiku plz plz plz let me play on your server back plz!!!
u banned me last year .... the only mistake i did was blowing up LILLY's home , and killing her in game .... , well another thing is lilly's house was my lab frist and i gave the land to her , its kinda like blowing up my home ....
plz accept my request to play again plz plz plz

And did some repairs on railroads.

Read all the books and am staying sharp with repairs and requests!
Extreme Survival Minetest-->viewtopic.php?f=10&t=12959

I can see the bottom spawn, different owner protection block, how can get ground near the spawn or in the spawn for a shop and home?
♕GNU♛

Hi! Welcome to the server, AL..

To get back to city you can use elevator in rocketship OR punch the black button at the teleporter.
Extreme Survival Minetest-->viewtopic.php?f=10&t=12959

ERRRR Please disregard my last comment, I mis read your post. As for open land, you will need to explore, most of the city is filled.
Extreme Survival Minetest-->viewtopic.php?f=10&t=12959

maikerumine , plz reply to me i really want to play your server

snowflake wrote:maikerumine , plz reply to me i really want to play your server

You need to start a new thread for 2b2t for Minetest to post updates there I guess.

Fixerol wrote:You need to start a new thread for 2b2t for Minetest to post updates there I guess.

I will, first need to write a bunch of stuff and tweak more codes.
Extreme Survival Minetest-->viewtopic.php?f=10&t=12959 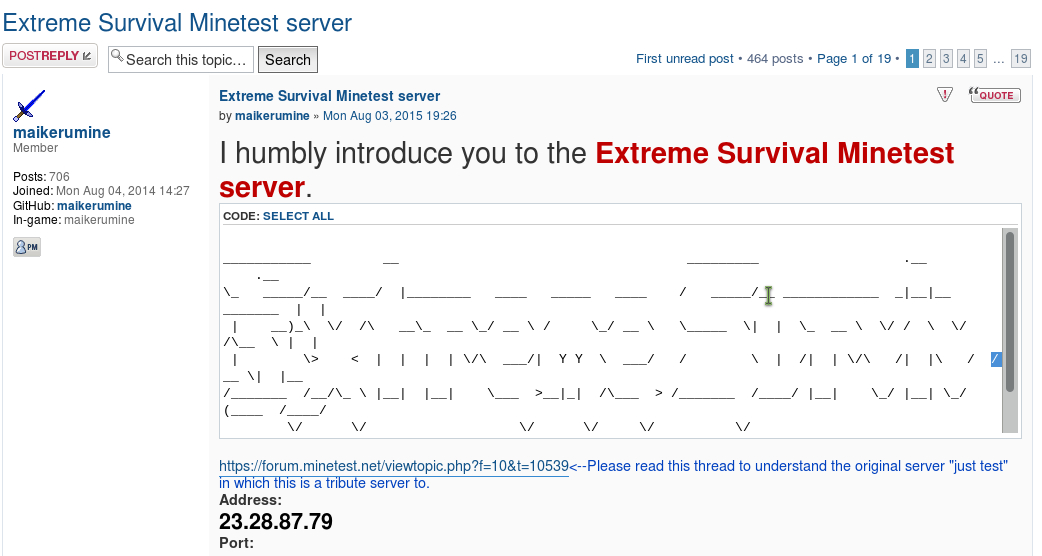 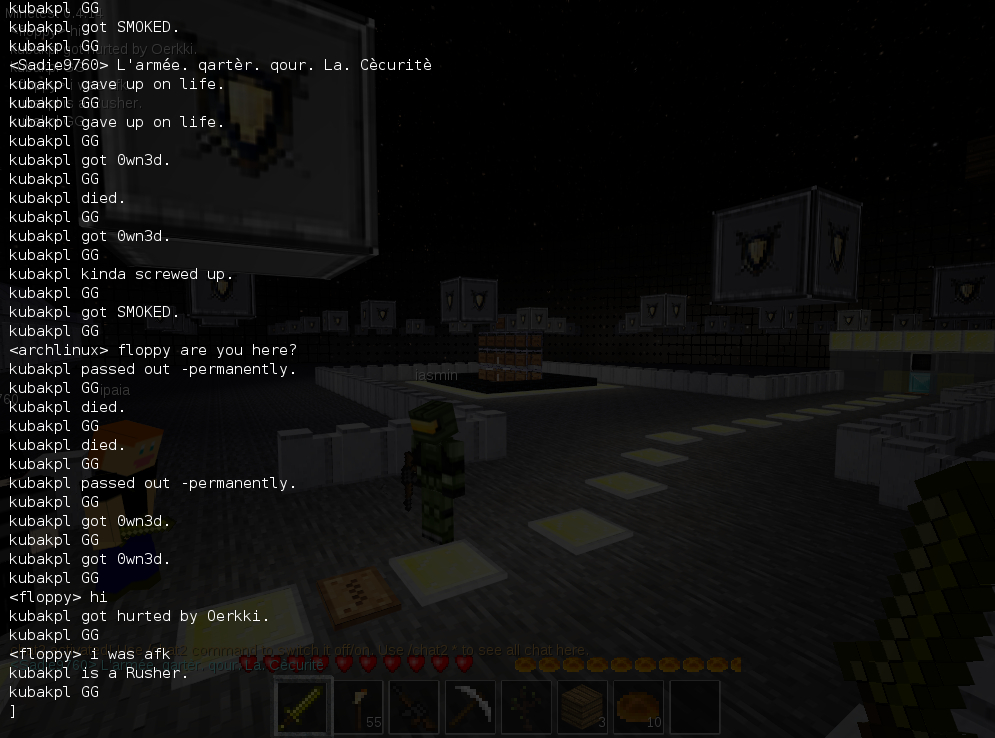 ARCHLINUX wrote:#maik , this sh*t is should't be :(

What did you do to my Nyan Cat!??
<gamerdude> I apologize for the above content

re: E.S.M.C. - today it crashes during login

Just to report, since you say you've made changes at your end with the server...

But today it crashes my minetest-client during log in.

That said, it happens so quickly, it's very hard to make out whether 20% is indeed the figure.

As always, I'm using whatever's the current daily latest version from the official minetest-devs ppa repository (seems to be version 201607260720-0~4942~ubuntu14.04.1 according to the Update-Manager).

To my knowledge I've made no relevant changes here this end, and what's more, I can still log in to other Minetest worlds on the server-list.

So, just thought I'd give the heads-up, one of your overnight changes may have introduced an incompatibility.

Really? What did you do to the Nyan Cat?
God's not dead! -- My Discord Server, My GitLab Account, My Mods, Favorite Servers, Youtube Channel

You mention Nyan-Cat code, though I've never actually never had or seen those.

But you also mention stairs, and with stairs, there's things I noticed a few days ago.

At the sides of the bottom of a staircase I'll often use those little corner-step blocks -- I mean those sort-of pyramid-shaped things, always used to be crafted by

A few days ago these corner-stairs seemed to disappear from the Craft-Guide, and I wasn't able to craft any new ones, although the ones I'd already placed in a building didn't vanish, nor did they turn into the dreaded ''Unknown Item'' blocks. At least that was the case the last time I managed to log in. Obviously, I don't know about now today as I'm still unable get past the Initializing-Nodes phase.

On a maybe-related note, I did notice oddness with the Circular-Saw the other day when I was trying that for the first time.

Firstly, it accepted some timber/stone materials but not others (I was wanting to cut some nice bright Aspen-timber into micro-blocks etc but it refused to saw them).

Secondly, I did notice that corner-stairs were one possible cut result from the Circular-Saw -- even though they'd already vanished from the Craft-Guide and couldn't be formed in the Craft-Grid either!

Could of course all be totally irrelevant but just that you mentioned stairs.

And, thinking typical software troubleshooting strategies, although admittedly it's on the same (only-one) computer-hardware/os/user etc, but I did also try a new different-name Minetest-account but that login also crashed at the same point.

Oh, and fwiw, I did the update to today's minetest-dev version 201607272231-0~4942~ubuntu14.04.1 but that made no difference, still crashes on trying to log in to your E.S.M.C. world but works fine logging into other worlds like Telesight's SurvivalWorld.

Hope this extra info helps identify where the problem(s) might be.

Thanks again for all your efforts :)
.

re : E.S.M.C. crashing during login

On this different machine, the Fedora laptop, I downloaded and built the current Minetest from source using the following series of commands (but with ''my_user'' and ''my_group'' substituted for the actual values) :

And with this fresh-machine/fresh-build/old-Minetest-account I was able to log into E.S.M.C. no problem. I saw that the corner-stairs were still fine at the bottom of a staircase I'd built. I skipped through the Craft-Guide and saw that corner-stairs were still missing, but there were indeed some new items---banner things and hazmat garments---although the Guide showed ''Unknown Item'' for whatever craft-components are supposed to be used to make the Rubber-Wood.

Having been able to log in from a fresh system made me think to poke around in the /.minetest folder on the crashing system with a view to trying deleting caches or preferences or whatever.

It was here I found a debug.txt file.

The last part of this debug.txt file, presumably just before the point it crashes during login, shows the following :

Sooo... maybe what I was wondering previously, about your mentioning of ''stairs,'' well maybe that is something to do with it after all...?

Hopefully this further info helps someone with the debugging.

To my ignorant eye, all the repeated

stuff makes me wonder whether it's crashing because something's missing and unknown.

Maybe it's some difference between the packaged minetest-devs ppa version and the diy-build from github source...?

Maybe some difference between nVidia and Intel opengl stuff...?

But hopefully this helps somebody suggest why the previously-fine system is now crashing during login.

I checked everything thoroughly and could not reproduce the bugs or errors. I think it may be client side not being able to handle node boxes.

I will comb through this tomorrow and try to narrow things down. Thank you very much for the great input. :)
Extreme Survival Minetest-->viewtopic.php?f=10&t=12959
Post Reply
636 posts