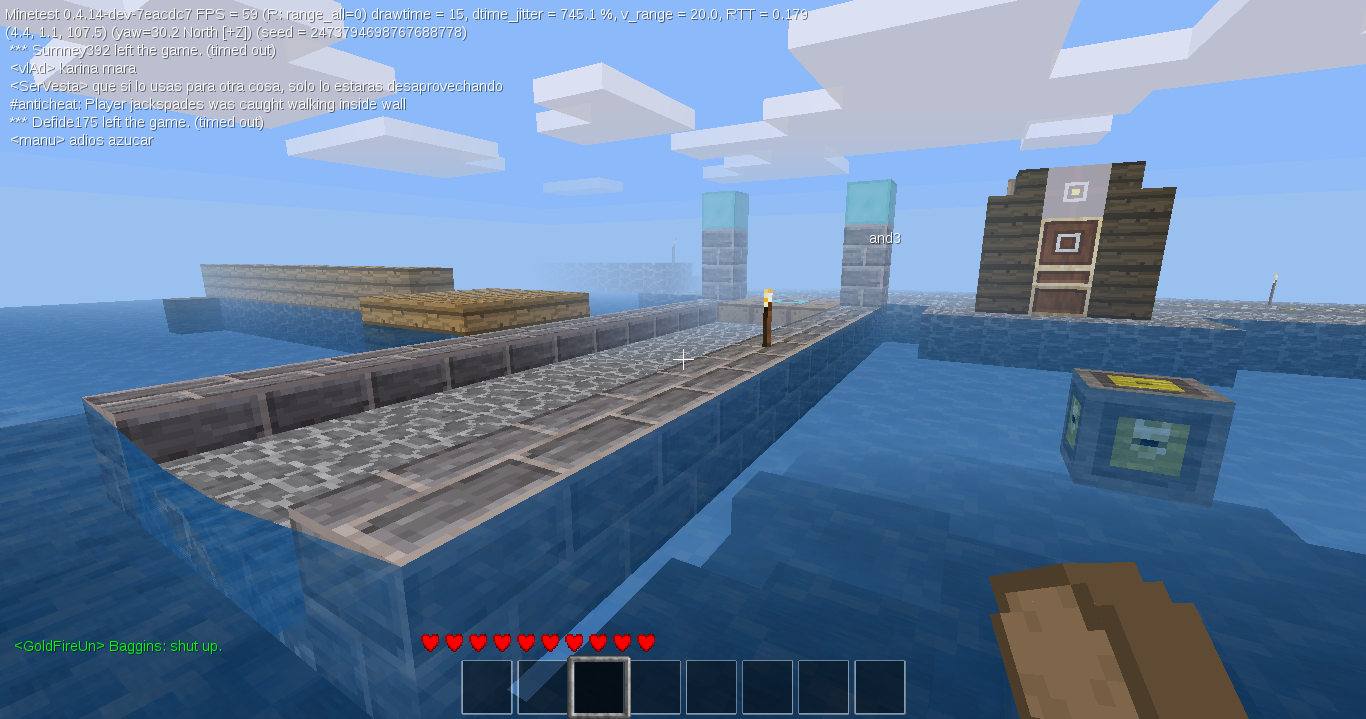 Notice what it says in the chat about jackspades cheating.

Jackspades_cheat.png
(465.82 KiB) Not downloaded yet

Given what jackspades said in chat later, I'm inclined to think this might have been a false positive. This happened to me last night. I was "caught flying" when in fact I was simply sneaking along the edge of a roof 5 meters above the ground. At least I got my bones back.

[Edit] It seems the server starts a vote to remove interact automatically if the anticheat is triggered. It takes only 1 vote to send it through. I'd like to say two things: I think just 1 vote is a bit too few (should need 2, maybe 3) and I also noticed that voting to give interact back requires too many votes, IMO.

I have used the one vote 'feature' against a cheater myself. Handy that. hehe. But I agree that one vote is too few. IDK about restoring interact. I haven't tried.

One thing to think about: If a player is 'cheating' but isn't using the cheats in any way that affects you, why do you care if the player cheats? Other than informing the server's admin, it is absolutely none of your business. Sticking your nose into other people's business can get you into major trouble in real life. In game, it can make you a target to be harassed. Think on that before reporting a cheater.

Oooh! An AFK cheater. Somebody left their 'fly' enabled. ;)

Before my attempt to extract the contents of his inventory:

After death. Only 2 torches! Ugh, I was hoping for something a little more juicy.

paininthearse try to put back privs to edub and he's saying it's sorcerykid or admin who put lava
Blue who loves you all but mostly someone :)

paininthearse has built & helped walaby build a great house. He's a great builder. He is a great friend to me trying to get my interact back. Wish you all had vision like he does. haha

Hey bub. edub is behind that shrub! Get a big club. Raise up like a sub. Drub the cub. Scrub in a tub. Go to a pub and eat some grub.

It never did make sense to me how, on JustTest, a fancy bed only required 2 wools and not 3 like regular beds. It seems that fancy beds are cheaper to make. It is the same here.

GoldFireUn wrote:Oooh! An AFK cheater. Somebody left their 'fly' enabled. ;)

Before my attempt to extract the contents of his inventory:

After death. Only 2 torches! Ugh, I was hoping for something a little more juicy.

Would someone please offer an explanation for why the glass roadway that abba constructed near spawn has been destroyed and that land acquired by a player named Guest0898? This used to be a very popular throughway, undoubtedly traversed by hundreds of players every day. Moreover, it was the only direct route to the south end of the city from spawn, and it afforded a critical link to a growing number of nearby homes.

Of particular concern is that abba himself was setting TNT to his own property. Not only that, but he then placed a sign stating "You are currently under violation of the anti-squatters clause", supposedly implicating himself (even though the administrator owns the server and thus cannot qualify as a squatter). A similar incident happened a few weeks ago when justtest forfeited ownership of a path leading to several newly constructed homes on the south end. Within hours of being released to the public domain, the path was quickly overtaken and blocked, forcing residents to find an alternate route to gain access to their own homes. Fortunately, in that situation, I was able to negotiate for ownership of the land, thereby restoring that path for public use.

Assuming that this is not the work of a hacker, it raises the question what the actual role of abba and justtest is on this server. I was under the impression there was "no admin", except for purposes of oversight and maintenance. Yet this ongoing trend of construction and destruction, even of structures that were obviously intended for public use, would suggest otherwise.

Stupidest program that I have ever seen. I was actually dumb enough to buy it one day for my computer. I enjoyed it for about an hour or so and regretted that I couldn't take it back for a refund.

Please send that mod to the dump not the trash folder. I'm gone until it is. I'm sure you are having laughs but me and several others are not so amused.

Please, please, please get rid of Eliza! That was funny for around 1 minute, and then it got old fast. Eliza is the sort of bot one adds to a server in order to get everyone else to voluntarily leave. I hope that wasn't actually the goal; I liked playing here.

After playing for about an hour with the new mobs installed, I've got some feedback.

In simplest terms, I think that these mobs make the game too hard for players (like myself) that want to be able to build palaces, not fortresses or small steel-walled bunkers. It also makes exploring other people's builds rather too hard, because now one has to constantly be on the lookout for these ... things.

I've noticed some "features" that I suspect should actually be considered bugs.

1) The new mobs spawn on stone under water, and since most of the city is built over this substance, you can guess what happens when players are innocently exploring random streets in areas where the ocean is shallow.

2) The surfaces they spawn on seem to be cobble, stonebrick, dirt, and mossycobble, IDK which for sure. While I would personally be fine if they spawned on cobble (to teach new players a lesson about building with that ugly material!), having them spawn on unlit stonebrick is going too far, IMO. Stonebrick was *supposed* to be a safe block to build with, and it is *frequently* unlit (think of the tops of walls, fixtures on towers, etc.). Having them spawn on mossycobble means that players cannot use mossycobble for plazas and other such stuff.

3) They have much too much HP. And drop only useless steel swords and sometimes a little jungle wood. NOT worth it to try to kill them, and since it isn't worth_it/too_hard to kill them, walking out in dark areas at night is now pretty much a death sentence.

While I'm not against making the server a little bit harder (the original JustTest was a bit too easy, IMO), I think that these mobs make the game harder than the original server seemed to strive for. I'd suggest giving them the same HP as stonemen, and having them spawn only on regular cobble (so as not to interfere with places where stonemen spawn).

As things stand, I have to say it: the current situation makes nighttime pretty much unplayable. My only choices seem to be a) hole up my one-room bunker, b) climb one of my towers, or c) log off for ten minutes at every sunset.

Other than that, thank you for creating this server! I hope it lasts.
/vote 0 zombies Making_The_Game_Unplayable
>:)

I assume this is because the new mob spawns on the same surface (natural stone) that stonemen do. In which case, I can totally see this being a problem.

edub/paininthearse/etc is flooding out chat right now. I request ADMIN to give basic_privs to AndDT, rnd, 843jdc, Sorcerykid, ... and another adequate players

DONE! you all will wipe those undergarment stains off the game proper.
Extreme Survival Minetest-->viewtopic.php?f=10&t=12959

EDUB, you are perma banned. You continue to harrass you will have your local law enforcement involved. last warning.
Extreme Survival Minetest-->viewtopic.php?f=10&t=12959

Not sure what I did. I've been banned for a while now. Is that not true? I haven't built anything on your server for weeks.

edub wrote:Not sure what I did. I've been banned for a while now. Is that not true? I haven't built anything on your server for weeks.

All your sock accounts with the spamming and trolling. Please.

EDUB, you are perma banned. You continue to harrass you will have your local law enforcement involved. last warning.

My local PD has more important things to take care of than some manchilds game server hosted on their companies server. All I was doing is playing the Minetest until you banned me for no reason. Your circle of buddies on the server are the ones harassing poor players like me. Best of luck! I moved on several weeks ago.

EDUB, you are perma banned. You continue to harrass you will have your local law enforcement involved. last warning.

My local PD has more important things to take care of than some manchilds game server hosted on their companies server. All I was doing is playing the Minetest until you banned me for no reason. Your circle of buddies on the server are the ones harassing poor players like me. Best of luck! I moved on several weeks ago.

Oh really? Then why did you come back as a different player and do the same crap you were doing at the beginning?

Make like a tree and leave.
Extreme Survival Minetest-->viewtopic.php?f=10&t=12959

Could we get a new server map image soon-ish? The last one is quite out-dated by now.

Make it an extra large one, please. :)

Glad to see you getting rid of that paininthearse

And wiped another one of edubs accounts off of the map. 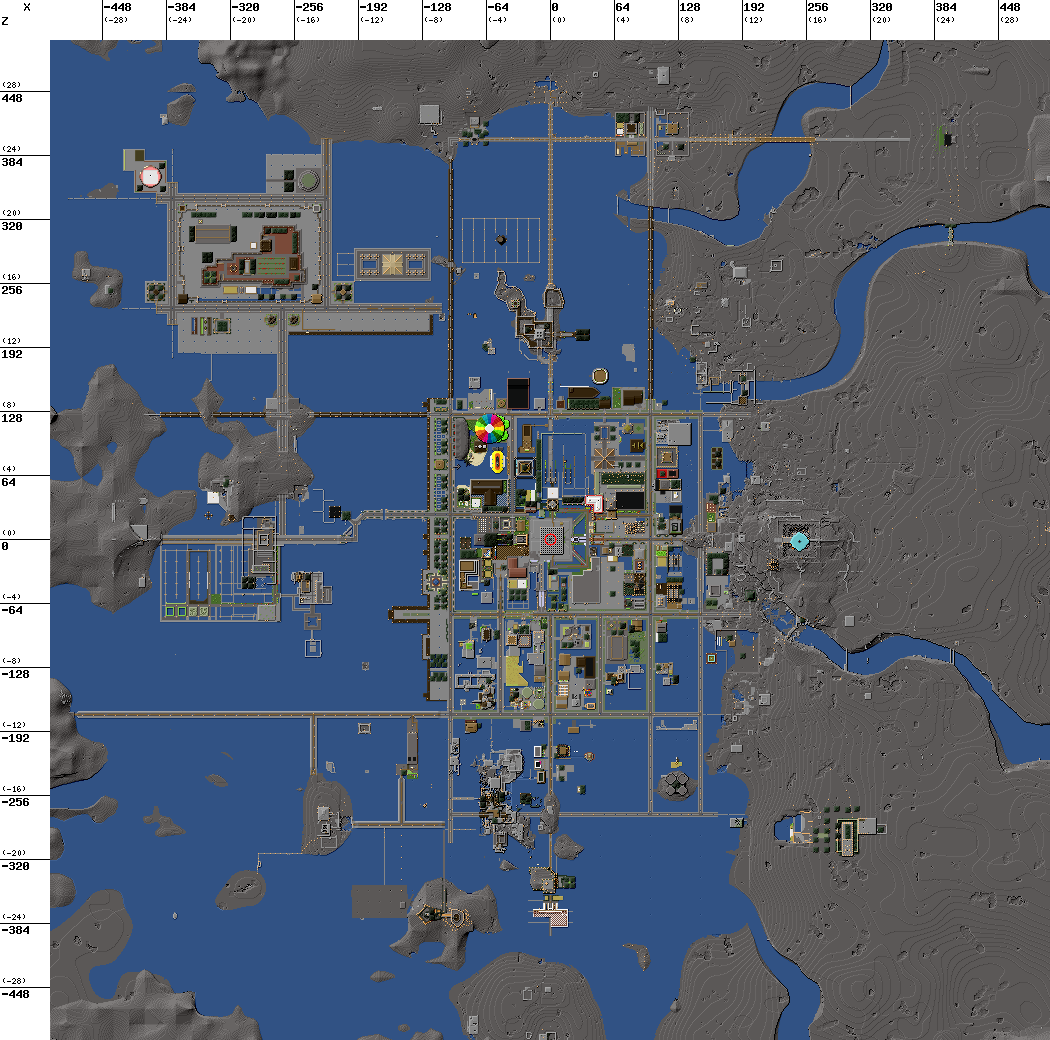