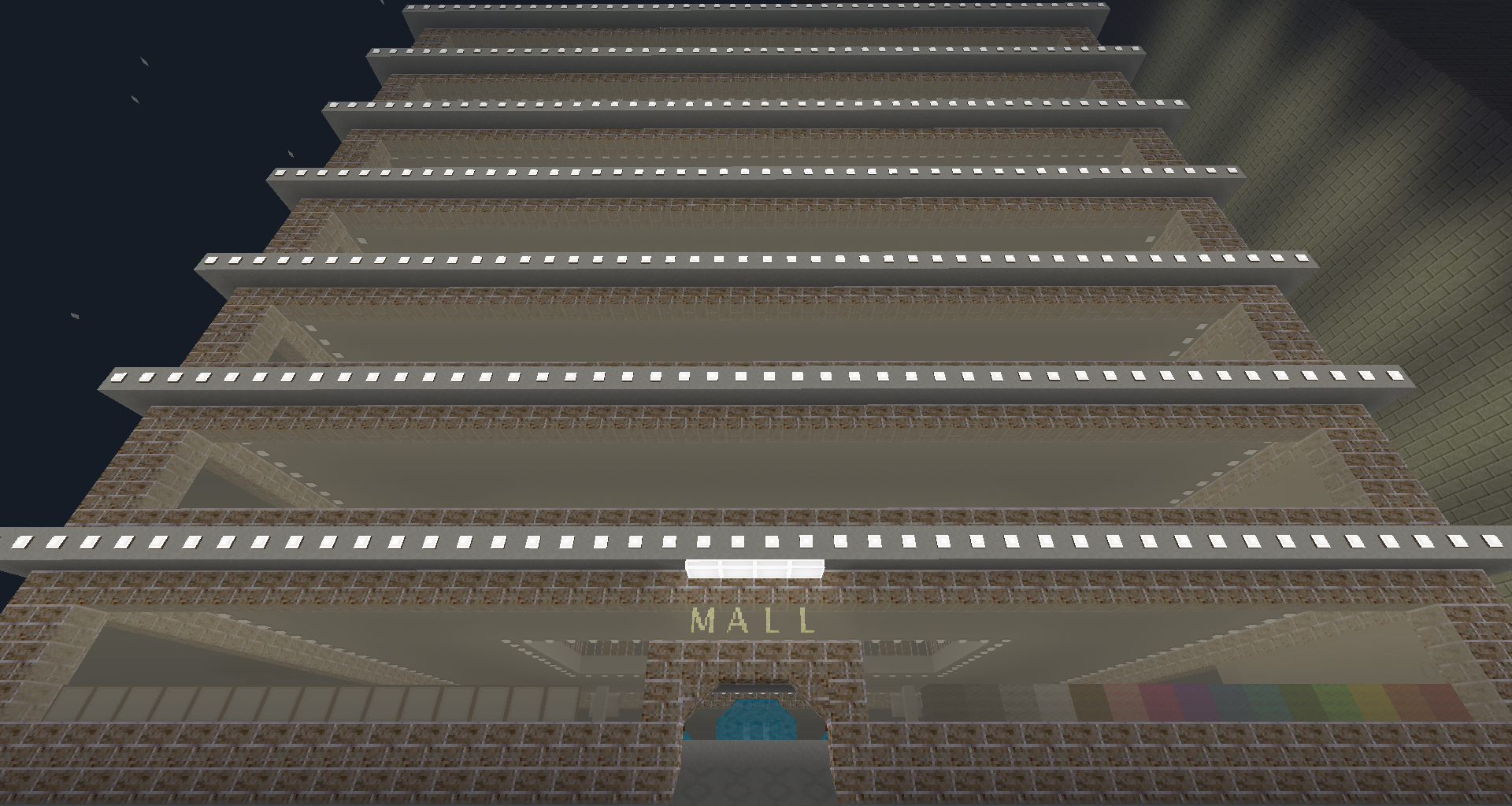 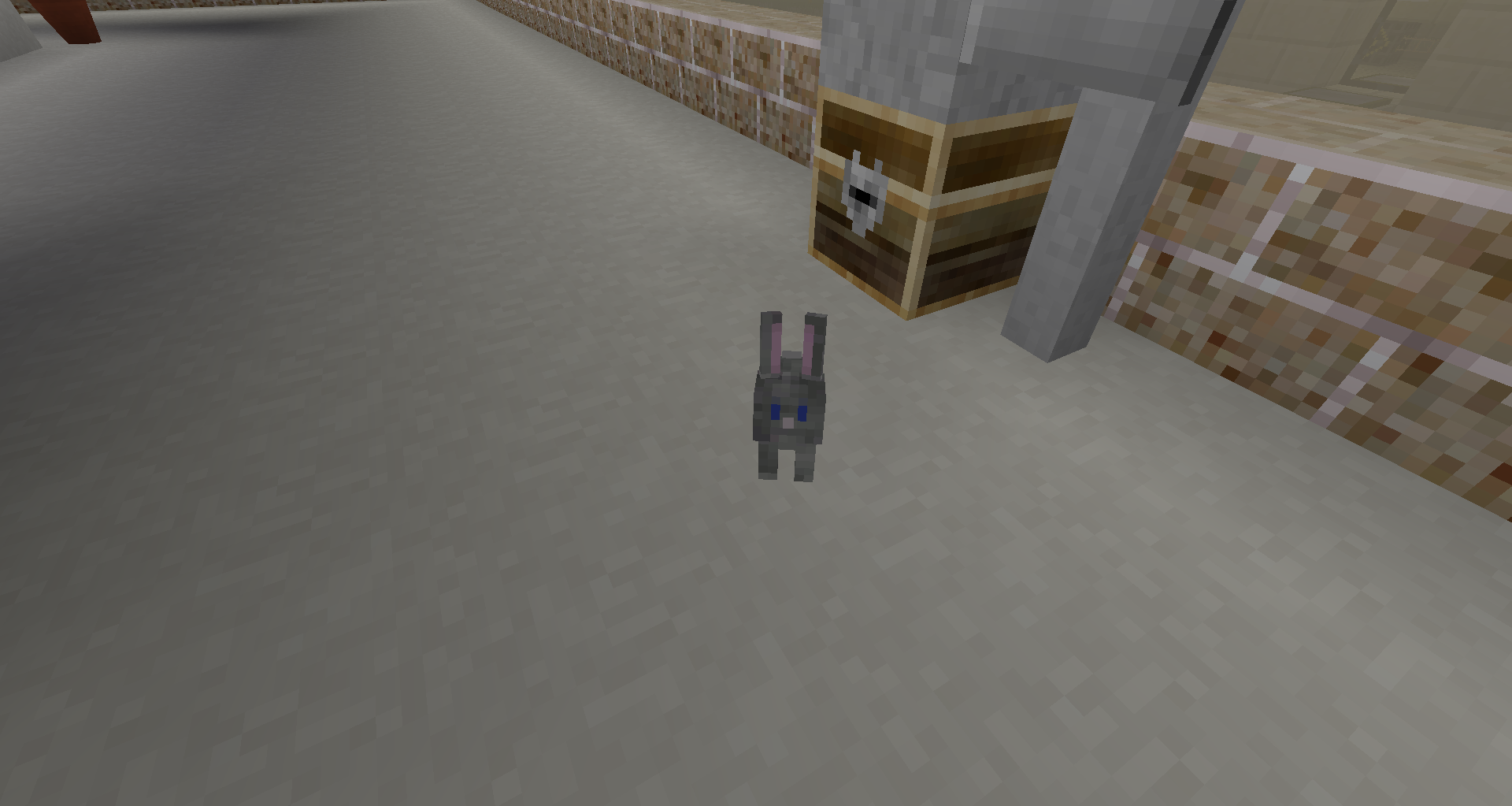 A bunny rabbit hopping around the mall 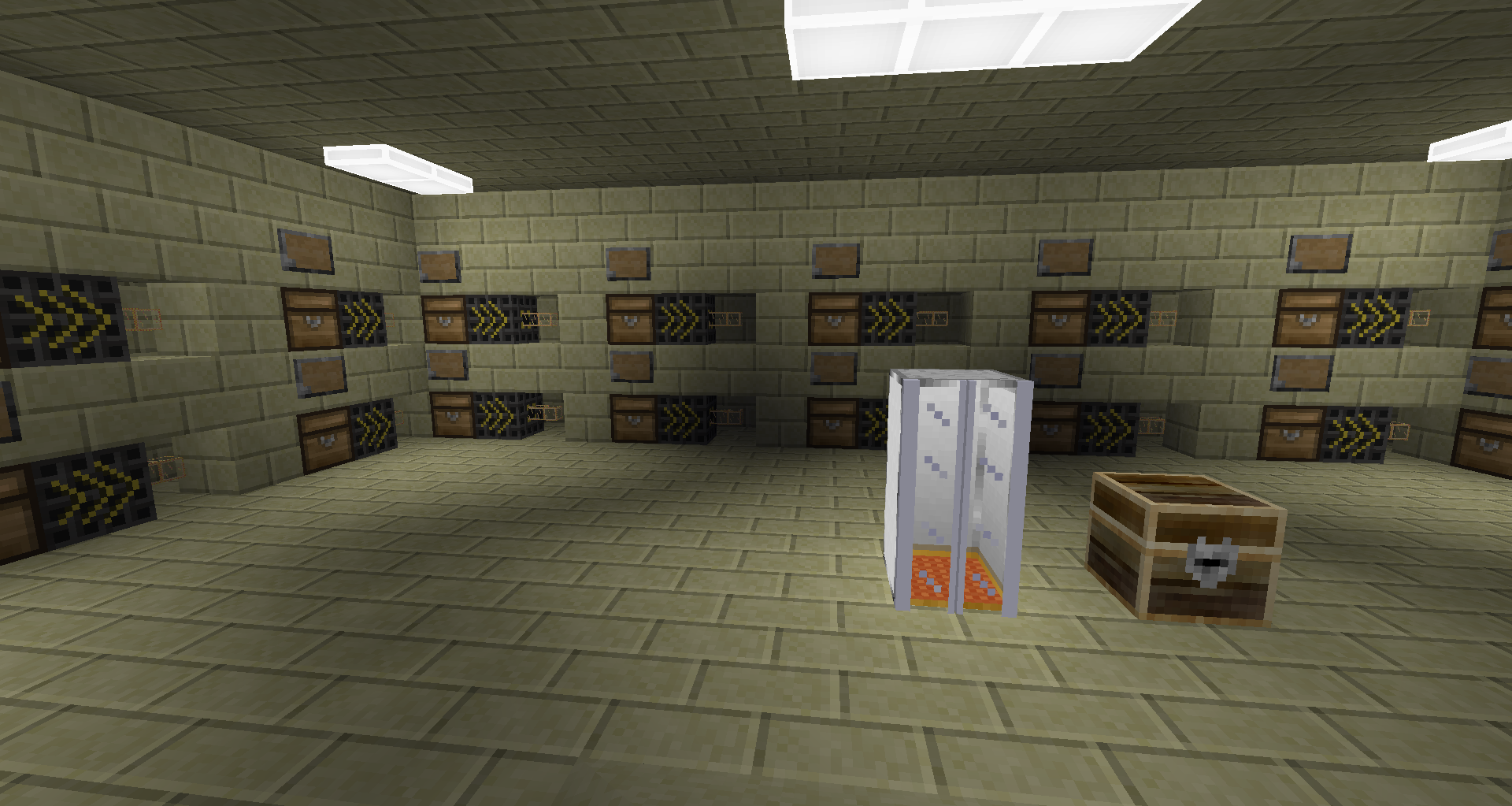 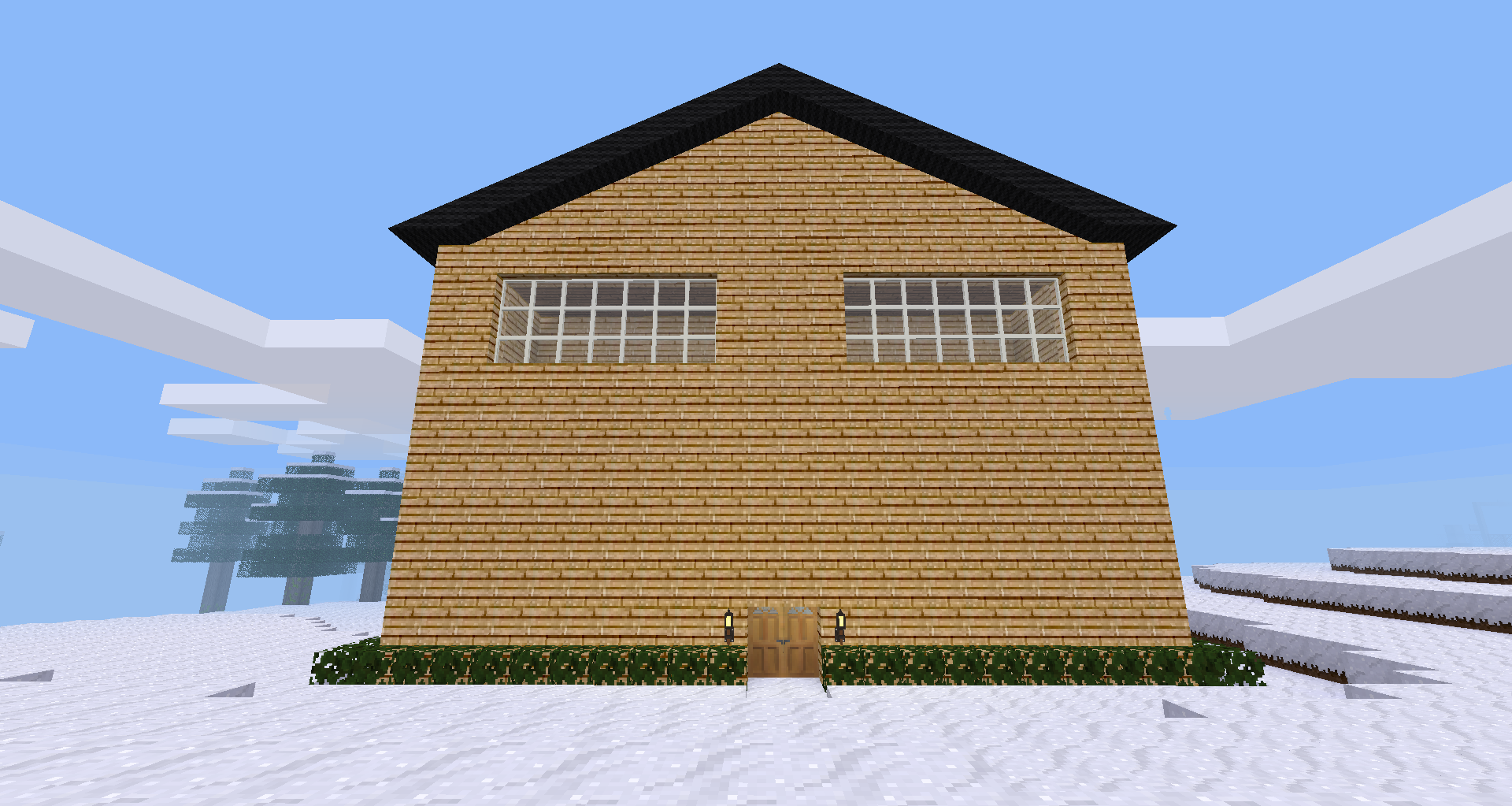 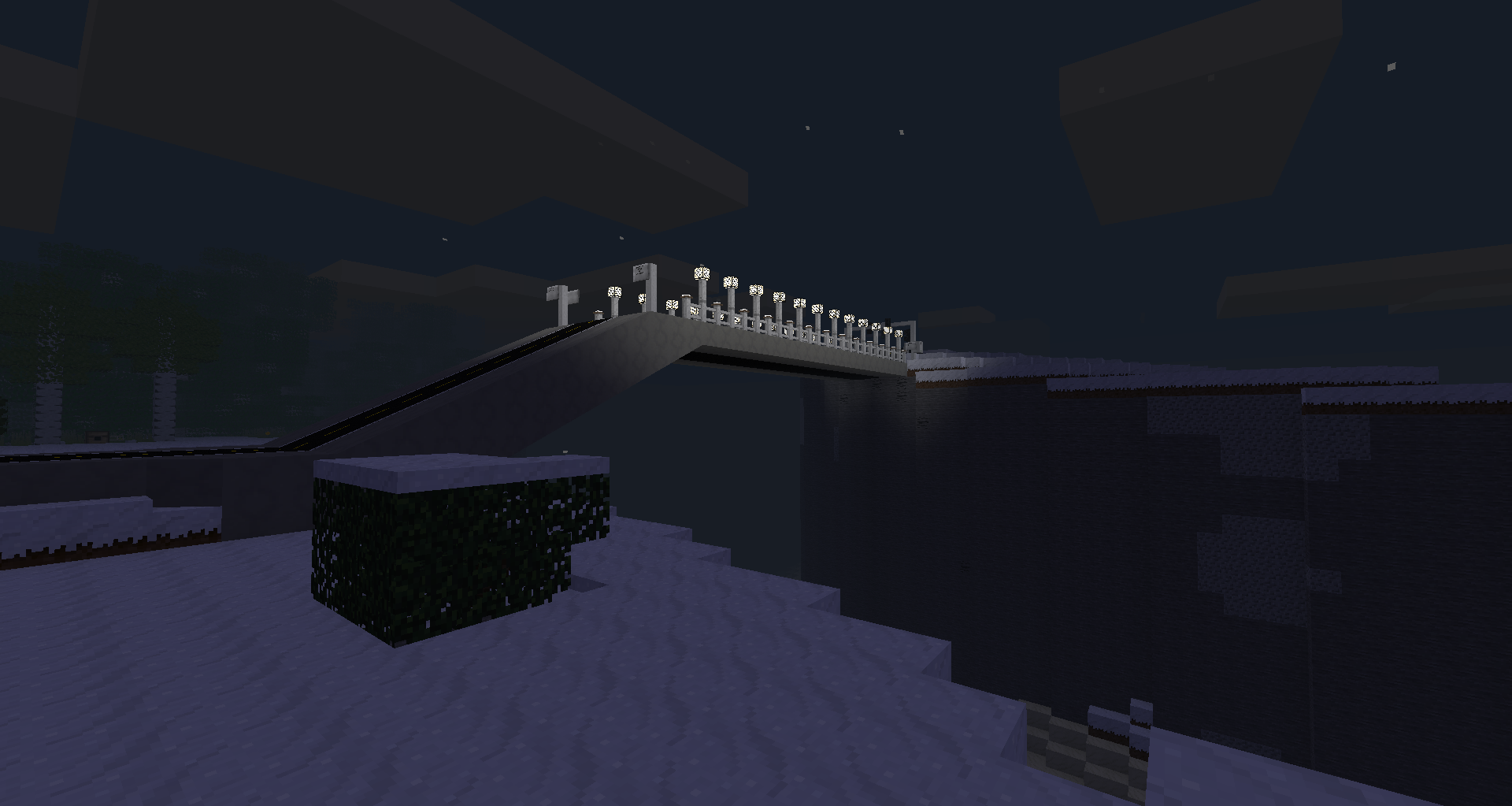 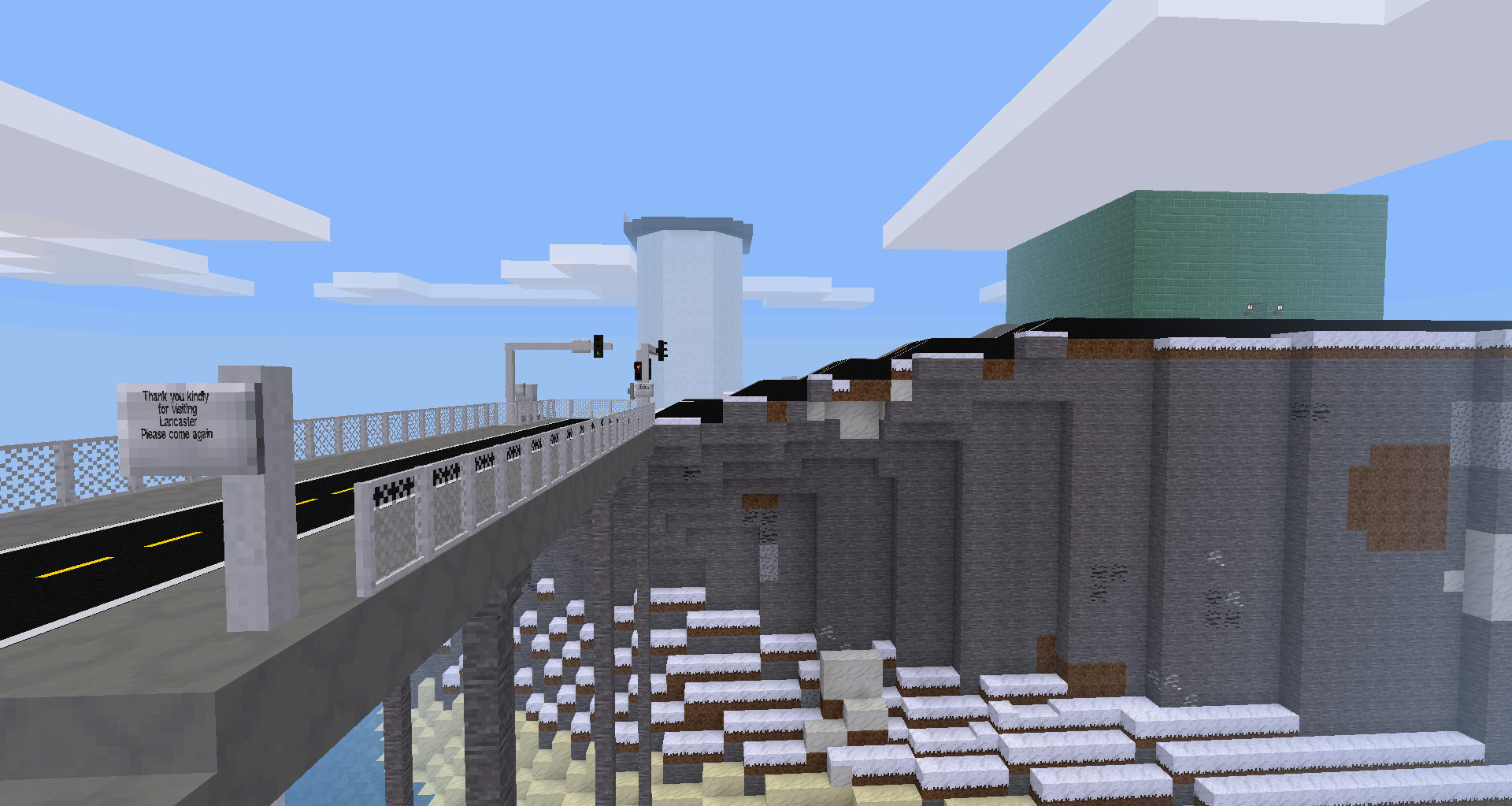 The spawn city of Winter Ridge under construction, taken from the twin city of Lancaster. Ambassador Bridge on the right.
This server was started to see how a survival server might progress from a brand new world. The server was officially launched on September 2, 2017 and features a wide variety of mods. As such, a desktop client is recommended for use. A partial list of installed mods is as follows:
Rules

Most of these should be common sense and are fairly standard across minetest servers.
More specific information

Player deaths are announced to everybody on the server.

The server is shut down at 3:00am Eastern time daily to run backups. Backups are kept for a minimum of 3 days before removal.

Rollbacks are enabled. If you are griefed, please contact a server administrator so that the damage can be undone.

The day/night cycle on the server takes 1 hour to complete instead of the default 20 minutes.

Inventory stacking has been modified so that most stacks will now stack up to 999 items. Tools still only stack to one. Saw blocks can only be cut into stacks of 99, but will stack to 999. This is to prevent accidentally cutting up a large stack of resources for nodes that you don't want. Items from certain mods still only stack to 99.

Privileges are granted based on trust that players will not abuse them. The default privileges are shout and home. Interact is granted when you enter the pass code which is currently abacus. Players without interact are free to explore the server but will not be able to mine or in any way change the world. Spill privileges will be granted after a short time (days to weeks) if a player does not cause problems. Fast is granted on request or with spill privileges.

User accounts that are unused for longer than six months or who have been banned are subject to deletion. Deleted accounts are not recoverable and if the same player registers again under the same name, their privileges will be reset to the defaults.

We are open to mod requests. Please submit your request here or to one of the admins and it will be considered for inclusion. Please note that we are currently not accepting requests for mobs as we feel the current mobs are adequate and suitable for the game. We are also not accepting requests for hunger, as this would in our opinion make the survival element a little too realistic.

If you find any issues with the server, please let us know immediately so we may fix them.

Your friendly neighborhood server administrators Your friendly neighborhood moderators Known issue: The health bar does not display for some users on first login. Version 0.4.16 appears to be the least affected however it will sometimes not display the health bar. We do not know what causes this, but it can be fixed simply by logging back into the server.
Last edited by greeter on Thu Jun 28, 2018 21:05, edited 7 times in total.

Mobs were added to the game via mobs_redo on September 14. All peaceful mobs and a few hostile mobs (dungeon masters, lava flans, and spiders) are enabled. If anyone wants to see more survival like elements added to the game, please feel free to let us known on here or via minetest.

In other news, we have a nuclear power plant. Players wishing to experiment are encouraged to visit the plant with any high voltage devices they wish to try out from the technic mod. Please be aware that much of the building is unprotected so that trials like this can occur. As such, only damage to the structure itself will be considered griefing. If you put it there and you want it back, take it with you.

The building has been constructed so that any areas which could result in health damage from radiation have been walled off. However the nature of the building allows some of these walls to be broken (against server rules). As such, any entry to walled off areas, regardless of how it occurs, can result in harm to players.

The reactor has been supplied with 3 years worth of fuel and will be decommissioned on November 20, 2020.

Server isn't accepting my password. I did tried several times doing slow and very accurate typing. Not sure what happened. I have had this happen on a different server.

I can try to reset your password. Which username do you have?

-> More Chest -- Shared Chest & DropBox Chest. WiFi Chest, maybe disable it if possible to force the usage of teleportation tubes? That's if you want people to have to work for it.

-> [viewtopic.php?f=9&t=16615]Unified Inventory Plus[/url] -- A must have for any UI fan. It adds buttons so you can throw a stack in the crafting grid and make it form ladders, stairs, and more. Extra bottons may be added.

-> Hidden Doors -- Not sure if this is the one I am thinking about, but I'm not able to find another mod that provides hidden doors.

-> Mese Crystal Fragments In Gravel -- Alternative to above to provide more mese.

[EDIT] The last two are just if you want people to be able to do more stuff that involves automation as a lot requires mese. I personally like the sounds of the second option (which I haven't used) vs the second (which I have).


Bugs
-> Water does not flow properly over edges at times, can show in-game sometime.
-> Water and Lava do not always create the respective blocks they should when flowing and in contact. Something else I can show in-game.

Greetings Qbiq. Sorry about the delay in responding. I like to save these sorts of projects for a day off.

The recipe conflict has been fixed with a change to mesecons. It now takes one stone and one cobblestone to craft a pressure plate. This should not conflict with any existing recipes.

The water and lava not interacting properly should be fixed now. This occurred because of a mistake in the minetest.conf file which (inexplicably) disabled lava cooling by default. Additionally, the default mod has been updated to the latest version to help reduce any issues that may have existed in the version which shipped with this version of minetest. I haven't observed any unusual water/lava behavior since, however if you continue to see this, please feel free to show StormFox or me in game, or record it and post it to a video sharing website so we can review it.

I've added protector redo, locks, hidden doors, and mese crystals. This should provide most or all of the added features you were looking for. Thank you for recommending hidden doors by the way, it seems like a pretty amazing mod which will make for some great builds on the server.

I didn't add More Chest. I wasn't sure how it would be useful in conjunction with locks. If you can explain that though I will probably add it.

This has been added. Enjoy. Note that the admins may be available for games at times.

I never knew I liked Technic so much until I played on this server! :P
What is SCP-055 again? I forgot.

This is one of the best servers, along with Hometown and Skywars :P
What is SCP-055 again? I forgot. 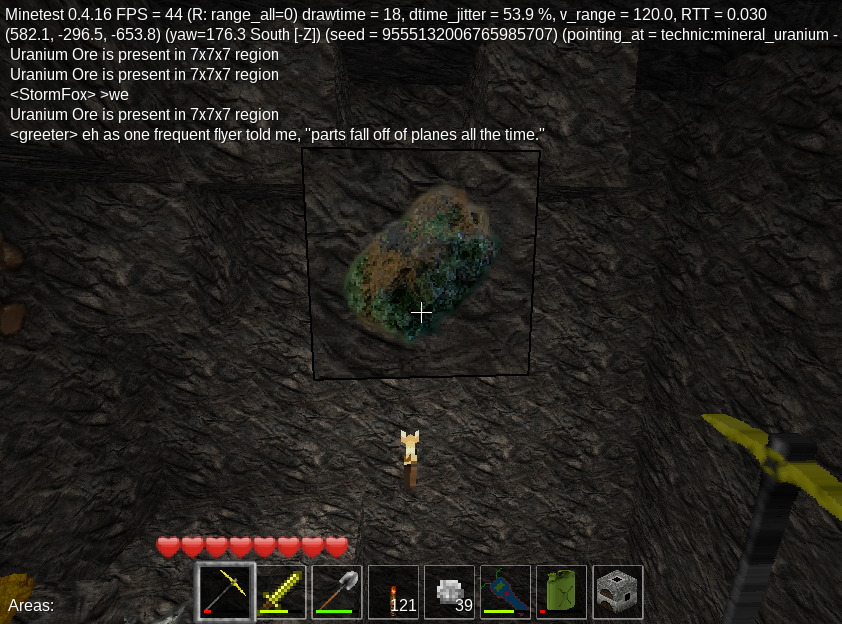 There has been a change made to the server. The currency mod has been removed and the money mod has been added. This was done so that admin shops could be introduced and to avoid admin running shops which sell basics such as dyes from filling to capacity or selling out of inventory or running out of cash. Everybody who logs in will automatically be given $1000. If you had more than this, please contact me in Minetest for compensation as the minegeld notes will now become unknown items.

If you had any shops from the currency mod, these will be replaced with unknown nodes. Once again, please contact me to have these shops replaced. Although this change may be inconvenient at first, we feel that this will make for a better server experience.

My/Miner_48er's uranium-refinement plant is up, now just need to melt down a reactor :D(Or beg greeter for a corium source)
What is SCP-055 again? I forgot.

There is a new building in Winter Ridge (Spawn) made of silver sandstone bricks. If anybody can think of a use for this building we'd be grateful. Thank you.

Also, Xio has set up a travelnet teleporter in Winter Ridge. His Mine 2 location would be perfect for anybody looking to build an underground city. Also, if someone is looking for a mob free area to build a city, Route 1 has been extended through a glacial biome. The only mobs that regularly spawn there are penguins. Either would be suitable for the ambitious city builder.

Could you install the Digtron mod for this server?
What is SCP-055 again? I forgot.

Chem871 wrote:Could you install the Digtron mod for this server?

Hmm, I've looked into this mod. I have concerns it could lag things even more than they already are though. What would you plan to do with the mod if it was installed?

Digtron is like a steerable HV Quarry. Sideways, up, down, any direction. It's only laggy when it's in use.
What is SCP-055 again? I forgot.

It's been a while since we've said anything, but I promise we aren't done yet. Maybe just resting a bit :-)

Anyhow, we have a contest to announce. StormFox and I spent the better part of an afternoon building a maze. The maze can be found in our newest named community, Petrograd. There is a travelnet link to Petrograd from spawn. Once there, simply head west onto the street, then head north. It's a large building and you can't miss it if you stick to the highway. It's on the ocean.

The first person to solve the maze gets some good prizes, like tools, tons of wool, and rare or hard to get items. Be sure to beat your friends to getting those amazing prizes.

We have another announcement. We've introduced another mod. The nether mod.

At levels below approximately -27000, you can enter the nether. You can dig your way down, or you can craft a nether portal similar to the way you do in Minecraft. For those of you not familiar how, you craft the portal by building a 4 by 5 hollow rectangle out of obsidian. It should look similar to a large doorway when you're finished.

To activate the portal, right click on it with a mese crystal shard.

Note that we have had to make some changes on this server to make the nether more realistic. So we've made the following changes.
Hope you all enjoy the nether.

It is not possible to create homedecor:oil_extract because the recipe is overridden by the same recipe for noncubic:cylinder_horizontal_leaves. The craft guide shows six leaf nodes in the lower six slots fro the latter but you get the same if you use the upper six slots as shown for the former.

Because of this, you can not create homedecor:plastic_sheeting and the myriad of nodes in other mods that depend on this.

The oil extract recipe is shapeless, all you need are six leaves anywhere in the crafting grid. I'm sorry I can't come here anymore, or at least for a while, as I don't have minetest 0.5.0.
What is SCP-055 again? I forgot.

Update: I was able to finally empty the technic gold locked chest using a pipeworks filter/injector and a blinky plant, but I still can not manually place objects into nor remove them from any technic locked chest I create.