CalebJ wrote: Tarantula Rankings (a ranking system that keeps track of how many tarantulas you have killed and how many have killed you) is now live on the server! You can find it in your inventory buttons, with an icon depicting a tarantula.

As some players might already have suspected...the tarantulas are about to take over! They'll celebrate their placement in the highscore and demand tribute from players in the future.
A list of my mods can be found here.

Sokomine wrote: As some players might already have suspected...the tarantulas are about to take over! They'll celebrate their placement in the highscore and demand tribute from players in the future.

Zeke, lea_argon, and several others seem to be the emperors of tarantulas so far. However, perhaps they are reproducing faster than previously imagined! -- those dungeons seem to be 'crawling'!
If you want realism, you're in the wrong place. Get off your mobile.

A big update has been made, completing our recent milestone and adding a Minetest <-> Discord relay bot (thanks to Hume), which is now in the channel #server in our Discord :) Some of the new features include (some of which were added some time ago, but are still part of this milestone):
- New and improved draconis mod
- A custom sound pack for the server
- Added an “Encyclopedia”, to put manuscripts into
- New awards
If you want realism, you're in the wrong place. Get off your mobile.

Some notes on this server:
- it's not very powerful. for best experience join when 10 players or less are active.
- world gen is good at mountains and caves (goes down to 30k hence the server name). it's not good at anything else.
- technically it's a very advanced server. we've got technic, inventorybags, paleotest, dragons digilines, two dozen cobble variants etc. and everything is forked so forget about going to any wiki for infos. especially for anything involving the elements mod. why check some dumb crafting manual anyways when you can instead put 500 different blocks into a machine until one nets you the part or chemical you need.
- there is no penalty for dying so please don't bother to make another ugly minifarm in a place where a decent built could have been instead. just don't bother with food.
- many of the players have contributed to the server with mods or textures. it's a small community but a competent one.
- titanium pickaxe is the fastest digging tool. not geminitium.
- due to a HDD storage saving mod that loads blocks only when needed digtron works a bit differently in most areas - blocks need to be manually tapped before they can be mined, else they're just removed. to make up for that, these areas net more ores.
- you'll want to decide between using ores directly by grinding and smelting or by using them in the elements mod machines. if you're not sure just store them until you know.
- gold boxes and drawers are the most effective storage. one of the first things you want to do is to set up a storage system using technic chests and sorting tubes from pipeworks. there are tons of items and very limited inventory space even with bags - automatization is key. if you want to move a full box you can do that with the wrench (bought at spawn) but make sure rotation memory from screwdriver mod is off or the box will become corrupted.
- trains everywhere. if you build anywhere near the cities someone will eventually come and built a train station next to it. only way to avoid is to build in the sky or at the bottom of the sea.
- specially bred horse or camels are the fastest way to move around. bike and car don't work too well.
- tools you'll want: node replacer, screwdriver, vacuum, crystal multitool, inventorybag with collecting&filter upgrades, some light block to place(super light block cut into smallest unit at circular saw is good), glider, aforementioned pickaxe, later radar tool for minimap, laser and drill. and maybe lasso+horse or camel. if you want to do farming for any reason it's good to use 7 block wide farms and make use of tractor and planter.
- for using the crane put sneak and move downward on different keys or you'll go crazy.

In response to what you say, I think that maybe something should be implemented to make food useful, because it's true that you just have to kill yourself and come back to where you were.

I would like to do this as well. Several options have been presented to me by flux and I intend to implement something of the likes if all goes well. (of course, since a handful of players don't even care for food, we have to approach this carefully)


fluxionary wrote: (1) redo all the food values based on how difficult they are to make. easy-to-make food shouldn't be very satisfying
(2) disable crafting on an empty stomach (particularly w/ craft all)
(3) only start damaging players when they're totally empty of food bars instead of having only 2, but add some other penalties when they're below, say 4 food bars. penalties like moving slower and not being able to jump very high
(4) don't respawn w/ old hunger, or full hunger, but at the level where some penalties kick in (e.g. 4 food bars, as mentioned above)

If you want realism, you're in the wrong place. Get off your mobile. 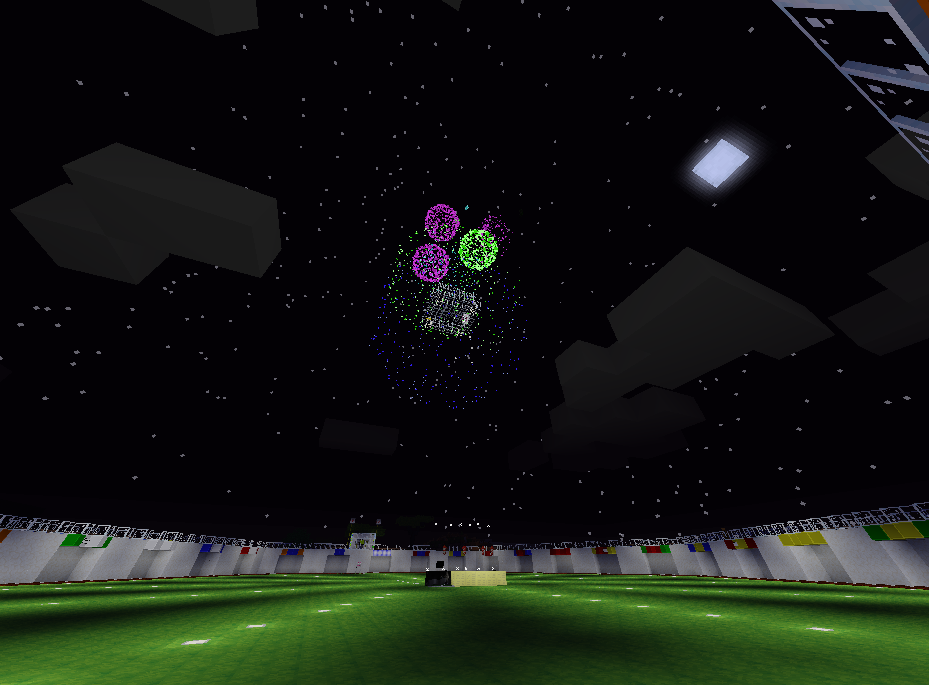 We had a big event organized by sivarajan, the football was a lot of fun with pseudonyme throwing covid everywhere. 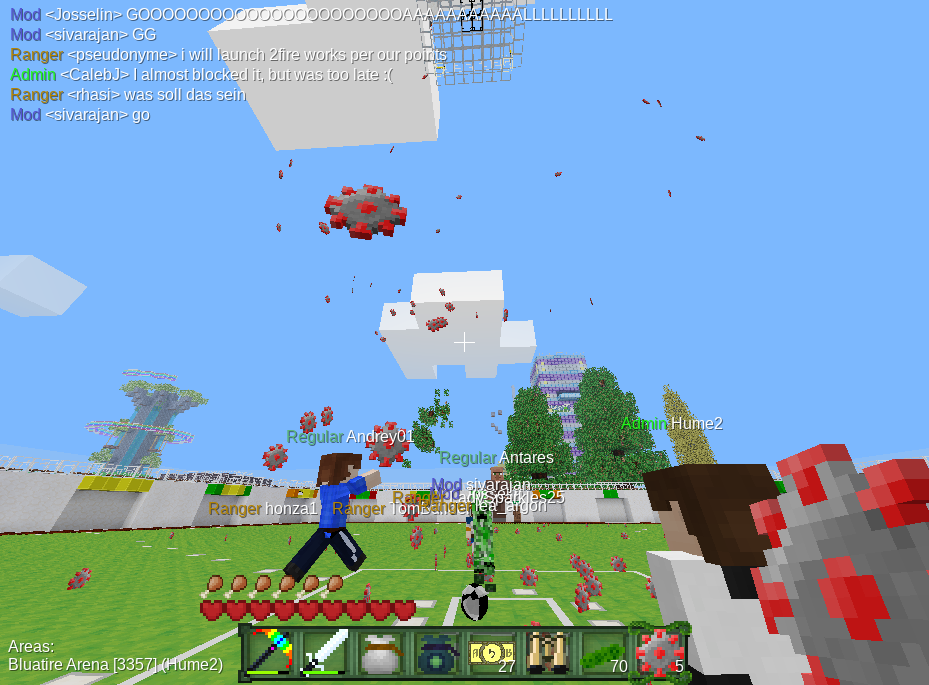 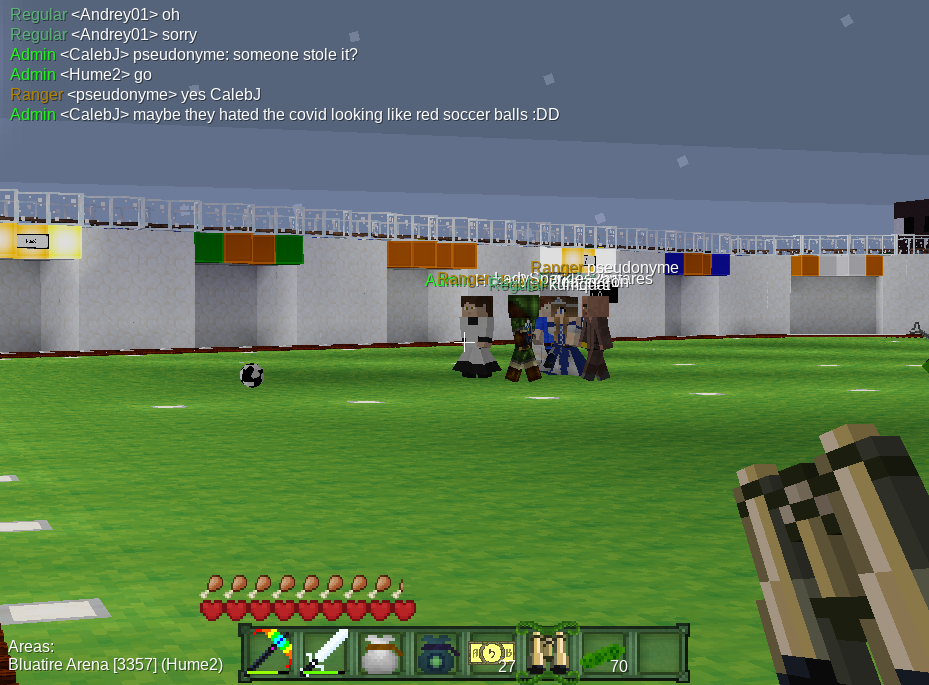 If you want realism, you're in the wrong place. Get off your mobile.

how do i reset the password on this server. I forgot it.
twitch.tv/r1bnc

Hi r1bnc, I will reset the password given the answers listed on the discord. Thanks for inquiring!
If you want realism, you're in the wrong place. Get off your mobile.

There are my screenshots from the event that was on 1 January (I just forgot to publish here): 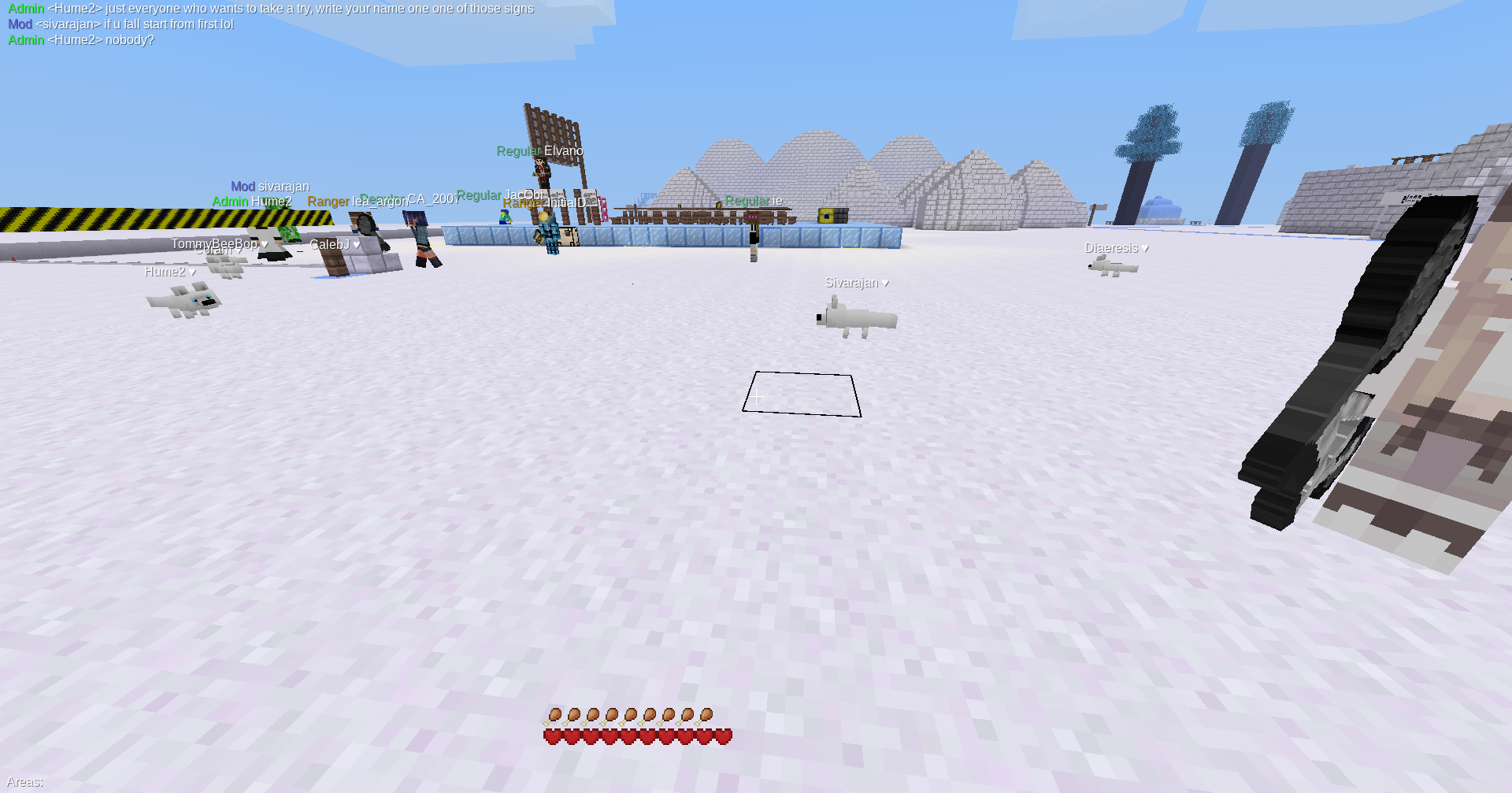 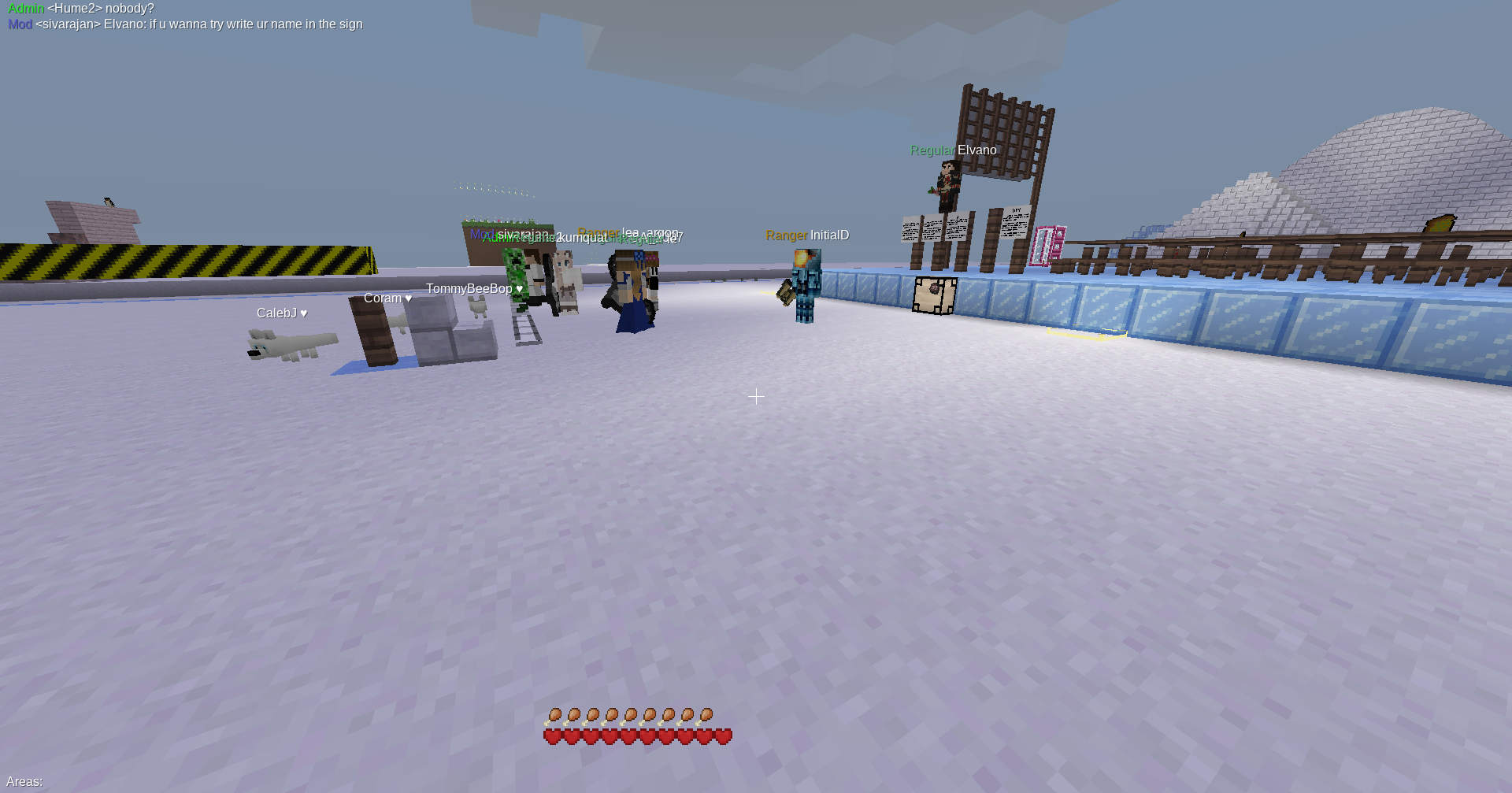 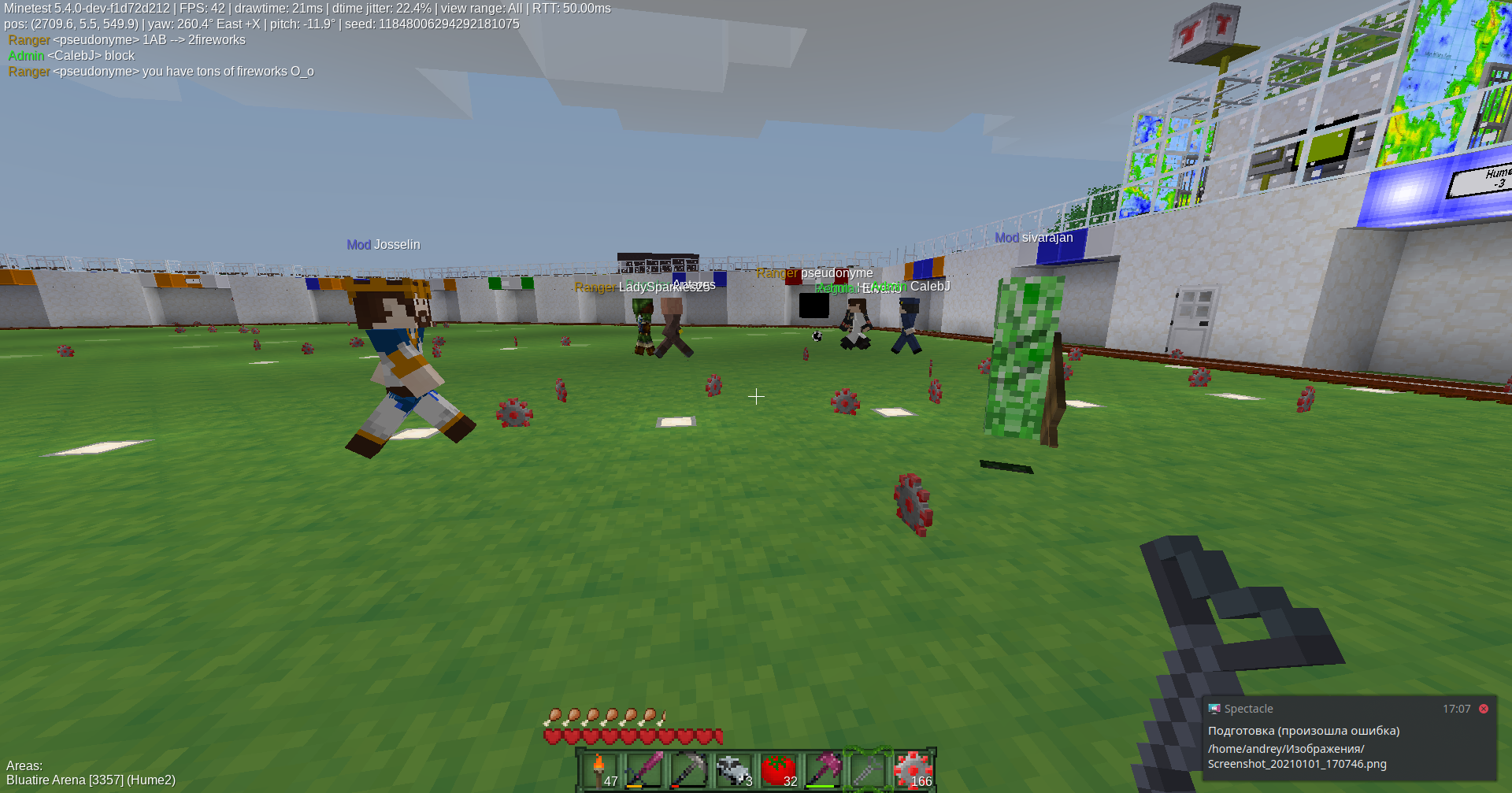 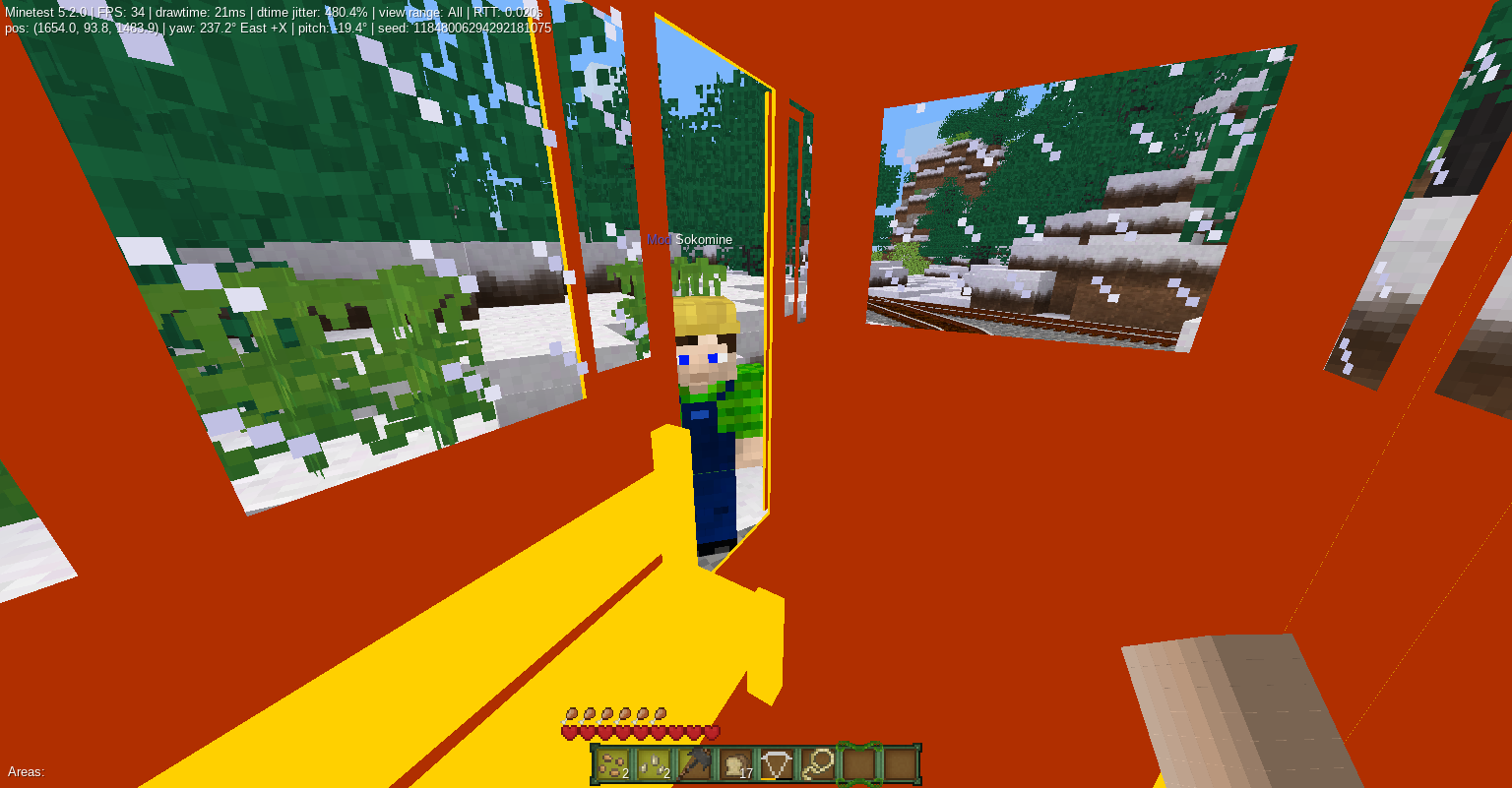 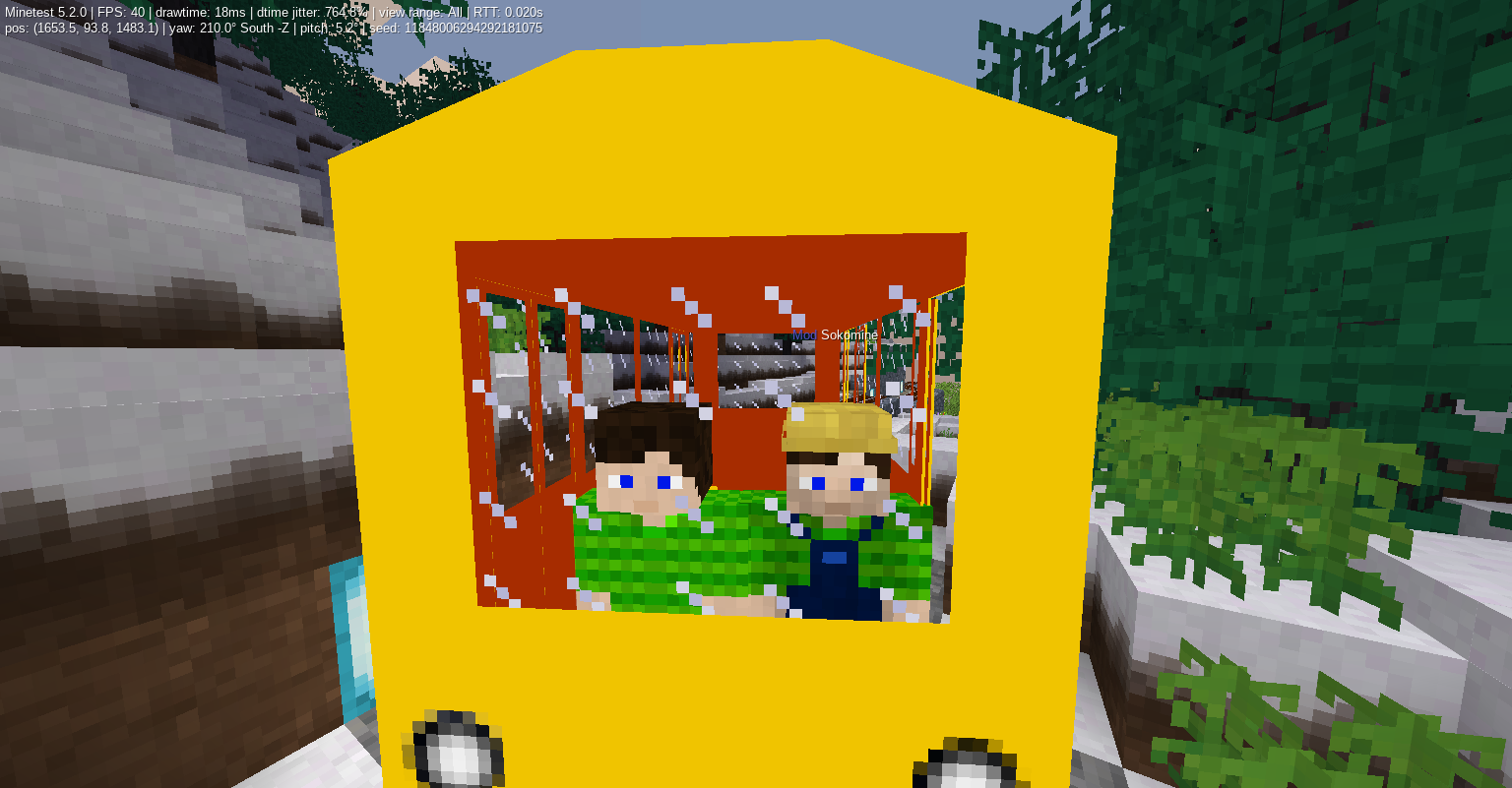