Lavaland is a server with a flat lava mapgen game. The game is experimental and WIP.

There's Mese Crystals (by RealBadAngel), but they're not of too much use yet. Though you can craft a mese bone pick with two bones and three Mese crystals.

Also, you can sprint by holding Special. 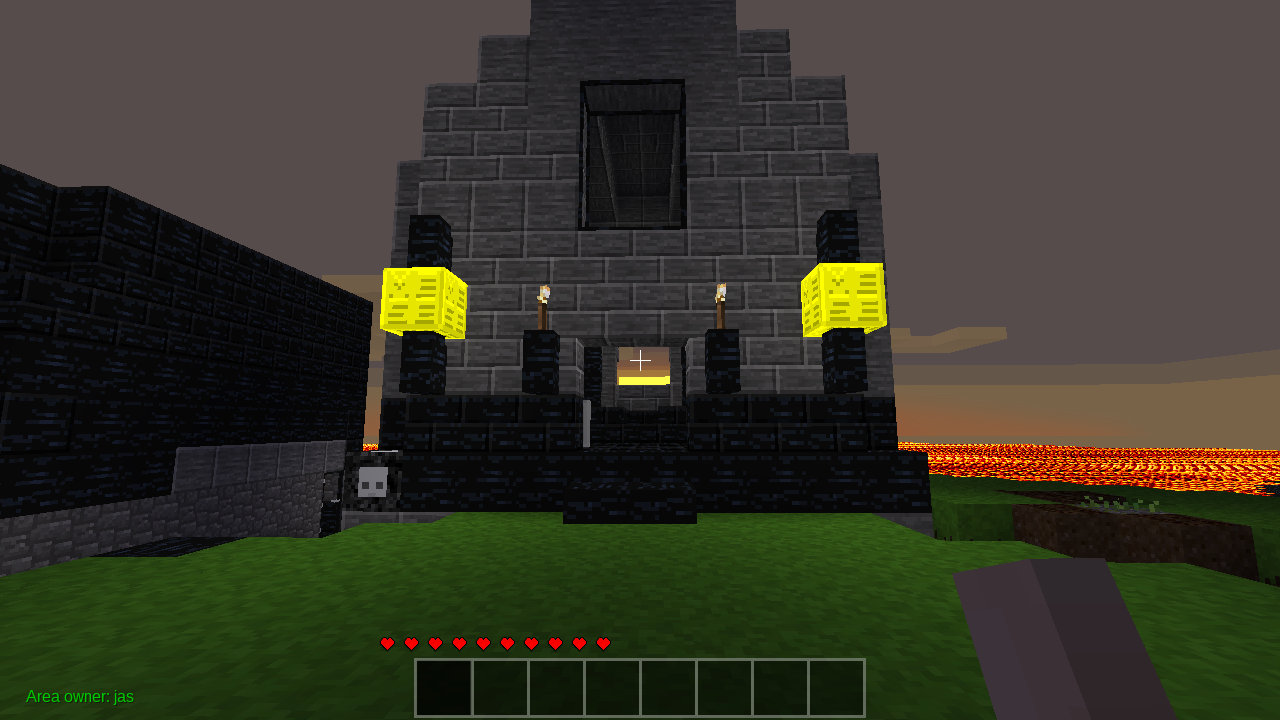 by jas
Added simple_protection by Krock. Here's a picture of spawn covered in stone from lava cooling: 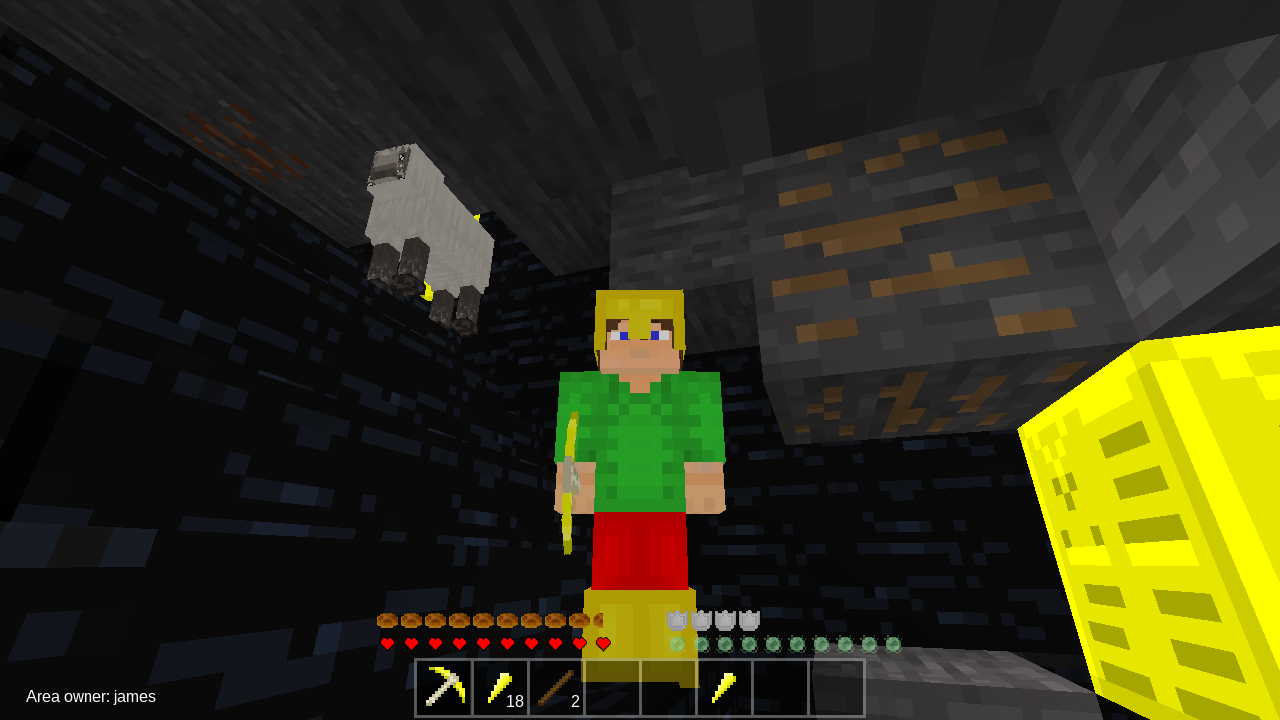 by Pyrollo
Nice and fun game. May be a bit rudimentary but it's still fun to play :)

There is missing a texture for copper blocks slabs and stairs and the craft guide recipe uses and unknown item.

Btw, how to obtain dirt ?

Pyrollo wrote:Nice and fun game. May be a bit rudimentary but it's still fun to play :)

There is missing a texture for copper blocks slabs and stairs and the craft guide recipe uses and unknown item.

Btw, how to obtain dirt ?

I tried to get dirt and It can be obtained by terraforming cobble with water, it turns into dirt later.

Enrikoo wrote:I tried to get dirt and It can be obtained by terraforming cobble with water, it turns into dirt later.

Thanks Enrikoo, I discovered that yesterday evening by chance :)

by jas
If there's a bunch of grass, a sapling is automatically placed.

I added a special feature to the sneak jump that uses the new set_player_velocity() thingy (method?). If you press (not hold) sneak right before jump with velocity you get a (tiny) boost. A second feature is using get_player_velocity() to lesson/limit fall damage avoidance. 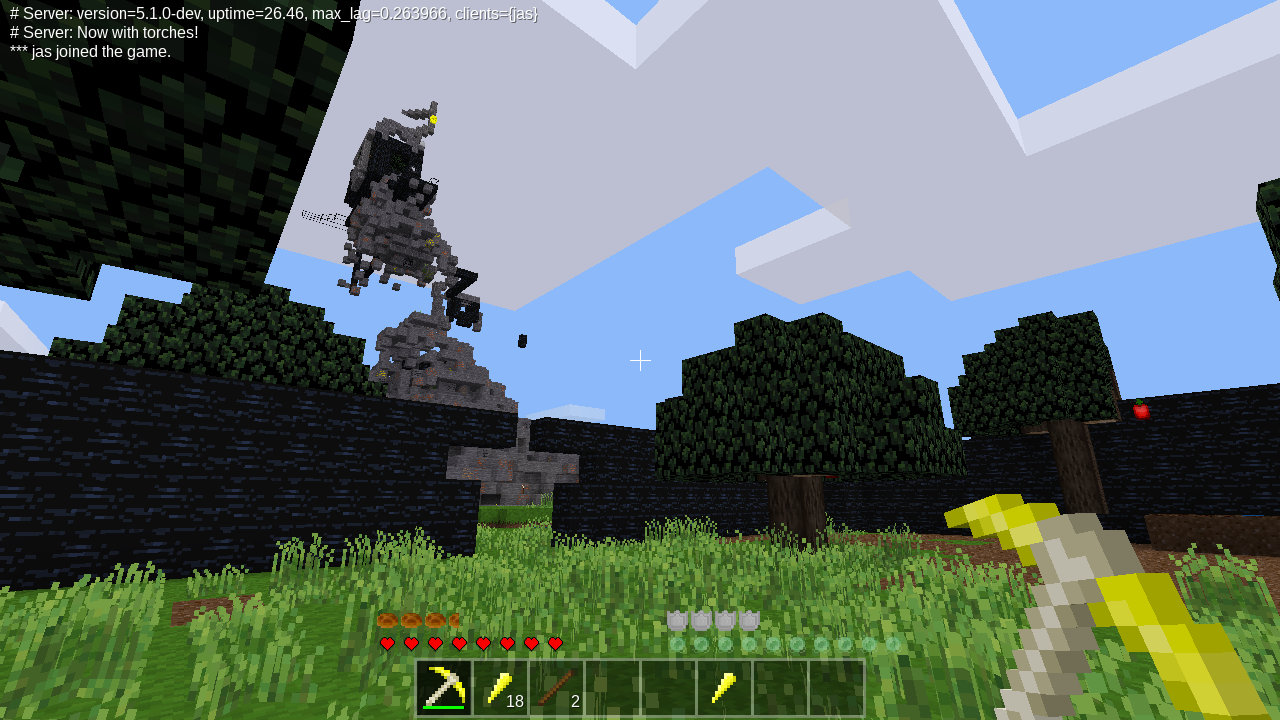 Still have to replace the statbar icons. Added beds. You can assign them names and optionally mark them as public and warp to them. So there's now warps. I'll still add the warpstones later, after emerald and ruby, and so on.

by jas
Features: If you die in a lava source node, you spawn a water source node in its place. The obsidian from the lava cooling grows mese crystals. Digging bones gives bones, and you can make a bone mese pickaxe. From there, if you place cobble near water it can become grass, eventually. If enough grass grows, a sapling will spawn and automatically plant.

Not everything is present from Minetest Game, but a lot has already been added, and more will be in the future. Biome specific items - like aspen wood planks - likely won't, however. Added a help system. Players with `help' priv can create and edit pages.

by jas
Added backpacks that can be dug and placed anywhere.

Added a persistent inventory slot that saves an item even after respawn. Meant for a backpack but will work with any item. by jas
Some fixes/additions:
+ Spoiler
Now I need to figure out why the NPCs are attacking boats! If i didn't mention it, I added terminal with walkie/intercomm. Holding walkie shows compass/coords. Using either opens the terminal. Terminal near mechanism checks for boom/warp functions!

by jas
Fixed a whole bunch of bugs yesterday. Thanks for everyone's patience!

The server has been running eighteen hours now, but in that time I've added a few features.

First, you can now chat from beds. Fixed some glitches they had, including warps listing and getting stuck. Next are /sit and /lay commands. You can also right click a chair to sit in it. It came with the table from the excellent X-Decor mod by jp. All this will be running once the server restarts.

by jas
I didn't realize boats had cruise control if you pressed up+down at the same time! Pretty neat feature, but I went and removed it anyway! Muahaha... That's the bad news, the good news is I fixed the boats detaching. Oddly, I just check if player is attached when adding XP, and return if they are. So weird that adding XP is what is detaching the player from the boat, so now I have to figure out why, so I can still add XP when attached to things.

Couple other little tweaks, but now that boats are stable, I'm going to work on putting satiation/stamina in the stats system (dunno why I didn't in the first place) and increasing their max values on level up. That way higher level players can go without food longer, and sprint for longer.

The server ran for three days without crashing, and had an average of 2 players and a top count of 7 when I looked last before restarting. It's a record!

Also I've been meaning to ask Krock about simple_protection and the blue area on radar that says "shared with everyone." Is that a feature?? I have to make a TODO file ;D Thx.

Edit: Still seems to be detaching sometimes, not as much -- back to the drawing board.

Edit3: Seems another improvement to boats has been made. Hopefully they're working better now. HOW TO MAKE A PRIVATE ISLAND:
1.) Dig five mese crystals and craft a mese boat.
2.) Drive out as far as you can, the mese boat travels only on lava!
3.) When you have found your ideal location, type /sethome.
4.) Get off the boat and die. Your death in the lava will spawn water, allowing you to create your own private oasis. Don't forget to right click and open the bones, instead of punching and digging them!

by jas
I added breath/max, stamina/max, and satiation/max stats, and on level up the player receives + random(1, 3) stat points for each, in addition to the hp_max which was already present. Higher level players will starve slower, sprint longer, and hold their breath longer (in addition to their max hp increasing). [Edit: These stats max out at 100.]

I also fixed boats. But it isn't pretty. by jas
Added Ring of Muddy Vision. Put it in your "save slot" (under craft output) to activate, hiding your nametag. I forgot to occasionally add wear, oh well. I'm going to also try adding Ring of Invisibility and Ring of Levitation.

NPCs don't endlessly attack boats anymore, mobs don't stand around so much, and the player doesn't go flying off when sitting or laying down. Fire checks for protection, and DM's explosions do too.

Added a help system. Players with `help' priv can create and edit pages.

Can I ask what mod you used for that?

I plan to add a move_page command next.

by jas
Ring of Invisibility is now live. Put rings in your "save slot," under the craft output.

Next to do is the ring of levitation, for some kind of flight.

by jas
I added the ring of levitation. Using it allows the player to float around. The movement is wonky for left and right, however.

The above shows how I'm doing it now. If anyone can help me figure out how to go left and right without affixing to a grid such as I am, I would be very appreciative.

The code is not yet live on the server, however, but will be once I restart. Edit: Changes are live.
Edit2: Fair warning: 1.) There's a bug where if you drop the item from the save slot (drag off inv and drop), the effect doesn't go away. There's a minute timer which eventually will check and see the ring is missing, however. I'll fix this next.

Edit 3.) OMG haha this is totally under construction, lmao. It's sorta out of control.

... Now it's a little more under control but still nuts. It's a pretty wild ride and was killing the client repeatedly adding velocity! It's disabled for now, will try again later. Good night.

by Enrikoo
I think I found another bug, if you plant mese crystal seeds, it wont show crystal as a node. Can you please fix that?

by jas
The seeds auto plant on obsidian if lava and water are near.

For the actual growth, only lava is needed. The more lava nearby the better, and I believe mese crystal seeds check for at least three. Water is only used in autospawning, not growth. I will look into the mod further and investigate and make appropriate changes.

I worked on the ring of levitation. I think I got it, and can move freely left/right now. It may still be too laggy and freak out. Once I get home I'll push the changes and test.

Next up is an anvil/workbench and enchantment machine, as well as dirt/gravel/sand machine and some mese wires to connect them to mese nodes. May take a little while and I really should start ironing out long-standing bugs.

Postscript: Code pushed to GitHub, and changes are now live. Enrico, thanks to you and oku, the mese crystals seeds plant correctly now.

by jas
I moved the hunger stuff into the stats stuff, and now hunger points are saved/restored properly.

The rings were updated again, now they poll for key presses every 0.1 seconds, and breaking every 0.2 seconds; up from 0 and 0.09 respectively.

A bug allowing the player to sustain ring effects by dropping one ring atop the other has been fixed. As well as when dropping the ring directly from the save slot.

Changes are pushed, but will not be live on the server until it's restarted. Update: Changes are now live on server.

by jas
Made a minor change to the lava cooling, and it may not be as responsive, but also not as intensive. Basically, lava_cool happens for lava source every 4 seconds, and lava flowing every 3, both with chance of 2. In MTG interval and chance are 1, but there's so much lava that it can be quite intensive. Fixed the shearing bug, from when I moved mobs:shears to tools:shears. Wool can once again be obtained by shearing sheep! Thanks again oku!

by jas
Added a warp from spawn to a "shopping distrct," an idea proposed by Mikuden.