FreeGamers is drafting and planning to release a holiday pack for independence day. We currently have a thread about it in our forum.
FreeGamers.org has moved to MeseCraft.net | FreeGamers on this forum is now MeseCraft

FreeGamers wrote: ↑
Mon Jun 22, 2020 19:20
FreeGamers is drafting and planning to release a holiday pack for independence day. We currently have a thread about it in our forum.

That's nice, how about you post on that thread instead?

I meant it as a invitation to share/use the content. It will be done before the 4th.
FreeGamers.org has moved to MeseCraft.net | FreeGamers on this forum is now MeseCraft

Would be fun to have monthly map rendering like on the old map.
Roses are red, violets are blue. Omae wa mou shindeiru.

I have renderings of the map from every alternating day beginning April 1. I can upload them all at some point soon.

To: Nemo
Recently I took over a chunk of property for my motel. This Belonged to Melisa777 and Bad_bunny. Bad_bunny willingly gave the land to me and removed his door. However, Melisa777 was not on in a while so If she doesnt remove her door could you do it for me? The coordinates are (305, 17, -131)
Thank you! -Mister_CJ

Nvm, I fixed it. Nemo please make sure you read a PM from me. thank you

Hi all! I've fixed a variety of reported bugs with books and papers today, such as book titles not being saved when navigating pages and the date field of papers only showing the timestamp. If you encounter any outstanding problems, then please drop me a note in a book or a paper, and I'll look into it :P

More bug fixes! Members of shared protectors can finally be deleted without having to dig and replace the protector. Also vending and depositing machines are compatible with protected chests, rather than just locked chests.

Since the Athletics mod is stable, I will be lifting the restriction on soccer balls this weekend.as well as adding a crafting recipe. I am also going to work on a suitable rolling animation and more variety of sound-effects, which should afford greater immersion.

Towards the end of May, I constructed a soccer field with a small stadium and had an amazing idea of organizing a soccer tournament. I began putting up signs and advertisements for recruiting 21 people to join. To my amazement, I had more than enough people looking to join! The tournament began on June 1st and lasted until June 30th, with the exception of having the finals taking place on July 10th (Enough time to get all the players and audience ready).


Here's how I organized it:
There are 7 different types of uniforms (or Armor): No Armor, Wooden, Steel, Bronze, Gold, Cactus, and Diamond.
I decided this was how I was going to differentiate the teams. I wanted each team to have 3 members so there was a total of 21 players.


Now how do I select which team is the overall winner? Well, I decided to break the tournament apart into 3 different stages: Qualifications, Semi-Finals, and Finals.


This stadium is where I held the Qualification Rounds: 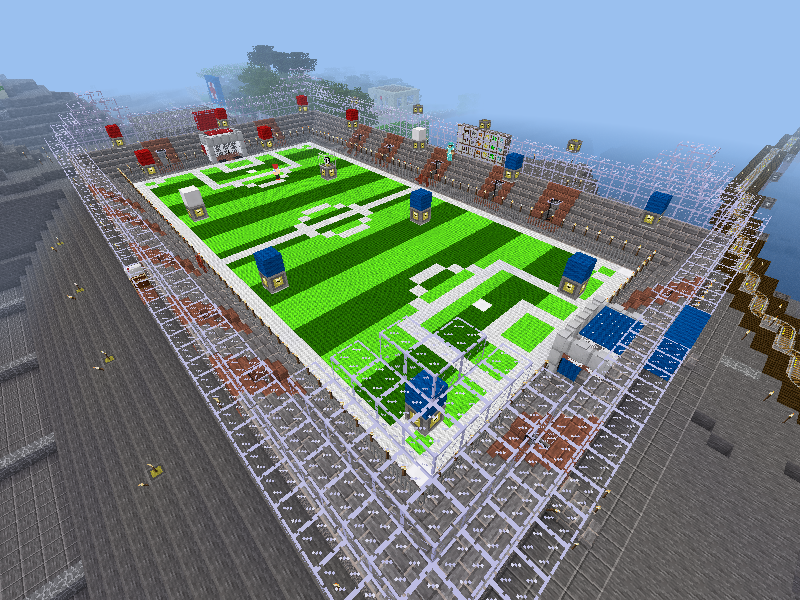 
The Rules for the Qualification Rounds:
-No killing
-No PvPing
-No picking up the soccer ball
-No use of chocolate eggs (Enhances speed and jump height)
-Return to your side of the field after a goal (Avoid people standing in front of the net to re-score)
-5 Goals to Win And here was the scoreboard that decided which Top 4 teams progressed to the Semi-Finals:

Thus giving us 7th place: Team Gold! Of course, no one walked away empty-handed so each team member won 3 Diamond Blocks: In 6th place, we had Team Steel! Each team member walked away with 5 Diamond Blocks: And in 5th place, we had Team Cactus! Each team member walked away with 10 Diamond Blocks: Once I had my Top 4 teams ready, I decided to upgrade the stadium for the Semi-Finals: ~This stadium also included a DJ Booth for Mister_CJ to test his DJ skills with the new DJ Mixer, and play music while the matches were in progress!


Again, each team would verse the other 3 teams left, but this time in a 2v2 match, with no limitations on who played. Same rules applied here, and the matches were even more intense, with greater audiences!

Aaaand the scoreboard with the same principles:

Thus giving us 4th place: Team Skins! Each member was awarded 15 Diamond Blocks for getting this far: And for our 3rd place team: Team Wood! Congratulations on coming in 3rd place for the tournament :D Each team member was awarded 25 Diamond Blocks: Now it was time for the Finals :D
The finals took place on July 10th, and a lot of people showed up! I was really hoping to get a 3v3 match, and as everyone had the date and time, 5 out of the 6 people showed I decided to let the match play through anyways.
Here were the results!: As you can see, Team Bronze took a huge victory, earning them the title of Champions!


The runner-up team was Team Diamond! Each player walked away with 50 Diamond Blocks: And the Champions of the JT2's 2020 Soccer Tournament was Team Bronze!! Each player walked away with 99 Diamond Blocks and a Well Deserved Trophy! Here are some pictures I took of the Champions of the Tournament and their Trophies!: 
Top Scorer!
I had used 2 soccer balls for the soccer tournament, and was planning to award one of them to the top scorer, as me being the host just wanted to keep one of them (I kept the one used for the finals haha) :)
I, Master_CJ, was the Top Scorer for the tournament leading with a total of 20 Goals :D Of course, I did not want to keep both of the soccer balls so I awarded it to the next top scorer, who was yik with a total of 15 goals! Congratulations :D Thank you all for playing!

Miner's Emporium Closed and another party!

Miss the last parties? Bored? Well look no further! Miner's Emporium is hosting our 5th party! After an abrupt closing for 2 weeks, Miner's Emporium is back and better than ever! With 2 new floors and all items organized into sections, our shoppers will have an easier time shopping.

Well its no use trying to sweeten the news. I haven't been on JT2 lately so it means I didn't get anything done and so the party is pushed back. Hopefully we can have the party on Aug 7, 2020. I apologize for any inconvenience

Great news everyone! Beds are functional again. I removed all of the "broken" beds from the map, and the screwdriver is now disabled for incompatible nodes (like beds, vending machines, etc.) to prevent this from happening again.

Also by request I made rotten eggs into falling nodes. That means they can be safely retrieved without cracking them simply by digging the node below, and then placing them elsewhere if needed. There still seems to be a bug in which the rotten eggs sometimes stop fuming under certain conditions. Unfortunately, I haven't been able to replicate the problem.

More updates! I just finished refactoring the protection mod. I took this opportunity to increased the usage count of both protection wands and protection masks. And I removed some of the extraneous messages that appear in chat when digging and placing nodes in protected areas. You can still obtain that information via the protection wand as usual.

In other news, bookshelves and vessels shelves now indicate whether their inventory is protected or not using a padlock icon in the formspec. This should afford some reassurance when building a private library that your collection of books and papers can't be stolen.

Sorcerykid, if you wonder why JT2 crashed again, look into your inbox for my message from June 12. :P

Oh, the thing you are looking for is called “Wizard” (the entity, not the node).
My creations. I gladly accept bitcoins: 17fsUywHxeMHKG41UFfu34F1rAxZcrVoqH

Bookshelves now serve double duty. In protected areas, they will show a form with buttons for each inventory slot, allowing visitors to read your written books and papers without actually taking them. Of course, the owner (and any members) of the protected area, can still manipulate the inventory as usual. 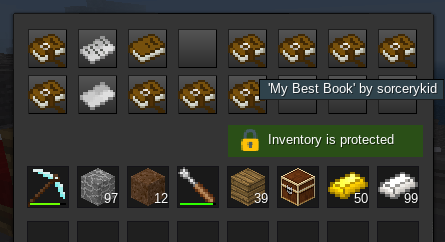 Speaking of books, you can now right-click while wielding a written book and it will show the title, date, and author in chat. This is an interim workaround until I add support for per-itemstack descriptions. Then you'll be able to reference that information via tooltip.

I tweaked bookshelves so now owners and members of the protected area can make use of the read-in-place functionality as well. In order to manipulate the bookshelf inventory like normal, simply right click the node while holding sneak (just like for editing signs). If you experience any problems with this feature, drop me a note.

Also by popular demand, 32 new skins have been added. With the continued growth of the server, this should afford enough variety for everyone to find a look that suits them. Of course, there's always room for more, so I'll gladly take suggestions for the next update. 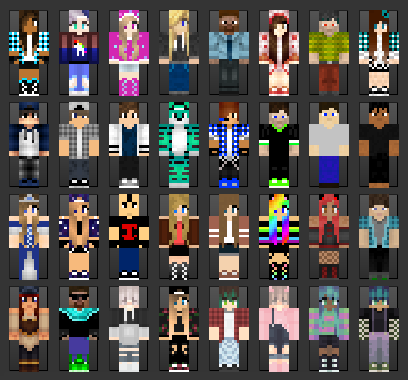 Hello everyone! I just wanted to give you all a quick heads up that animal mobs are re-enabled. I had to change some of the properties so they would be compatible with the latest update to Mobs Lite. All animals but chickens are now capable of feeding. It is up to you as a player to determine which food items each animal prefers, and whether or not they can eat directly out of your hand.

Also I'm well aware that if you offer a stack of food to animals, they will eat the entire stack rather than just a single item. I'm working on a fix. So please be cautious so as not to waste your hard earned edibles!

I fixed a couple of skins that apparently weren't properly converted. So if you wondered why some players were partially transparent, that's why. I also uploaded all the new skins to the JT2 homepage so they should now display correctly in the live server map.

Also bookshelves are now functional, for sure this time. Sorry about the mixup, as the protection check slipped through testing.

Great news everyone. I've finally solved the mystery of the non-exploding eggs. You should no longer encounter any problems with placing and breaking eggs. I've also removed all of the eggs that were non-functional from the map.

I also resolved a bug with the inspection wand that would crash the server when pointing to certain entities. As it turns out, I didn't account for textures in the initial properties.

I also resolved a bug with the inspection wand that would crash the server when pointing to certain entities. As it turns out, I didn't account for textures in the initial properties.

Nope. I just tested this.
My creations. I gladly accept bitcoins: 17fsUywHxeMHKG41UFfu34F1rAxZcrVoqH

If I post an announcement about changes to the game, that means it applies to the next restart. I also don't know why you would keep testing to see if you can make the server crash.
Post Reply
122 posts