I'm getting this error when I try to log in:

The draw_hotbar line repeats so fast with no sign of stopping. I decided to only copy the first of them to avoid spam.
My Mods: Kerova - viewtopic.php?id=8054
My Server: Kalisae - viewtopic.php?id=9040 <--CLOSED UNTIL FURTHER NOTICE!

For some reason I can't break blocks anymore. Did my interact privileges get taken away?
Shoutouts to Simpleflips

No, it was the result of a player accounts clean-up a while back - everyone lost interact as a side effect. I've just now restored yours. Let me know if there are any other problems from it.

Glad to see you're back!
You might like some of my stuff: Plantlife ~ More Trees ~ Home Decor ~ Pipeworks ~ HDX Textures (64-512px)

I lost my interact too. Could you please give it back?
Last edited by Inocudom on Tue Feb 18, 2014 01:34, edited 1 time in total.
You can now find my videos at BitChute: https://www.bitchute.com/channel/some_cheeky_jinuskian/

Done. sorry about that, Inocudom.
You might like some of my stuff: Plantlife ~ More Trees ~ Home Decor ~ Pipeworks ~ HDX Textures (64-512px)

Can I please have interact?

Sure, please sign onto the server once so it knows you and let me know of your in-game name.
You might like some of my stuff: Plantlife ~ More Trees ~ Home Decor ~ Pipeworks ~ HDX Textures (64-512px)

Alright, my in-game name is VladDrac.

Hi Vanesa, can i have interact as: rootoor

Interact granted.
You might like some of my stuff: Plantlife ~ More Trees ~ Home Decor ~ Pipeworks ~ HDX Textures (64-512px)

I have been investigating the server crashes some more that occured on the VE-Creative server since yesterday as reported hereand here on IRC and some time earlier. The falling gravel nodes mentioned earlier seem to not be directly related to this.

It seems that interacting with nodes in a certain area causes the crash. As can be seen
+ Spoiler 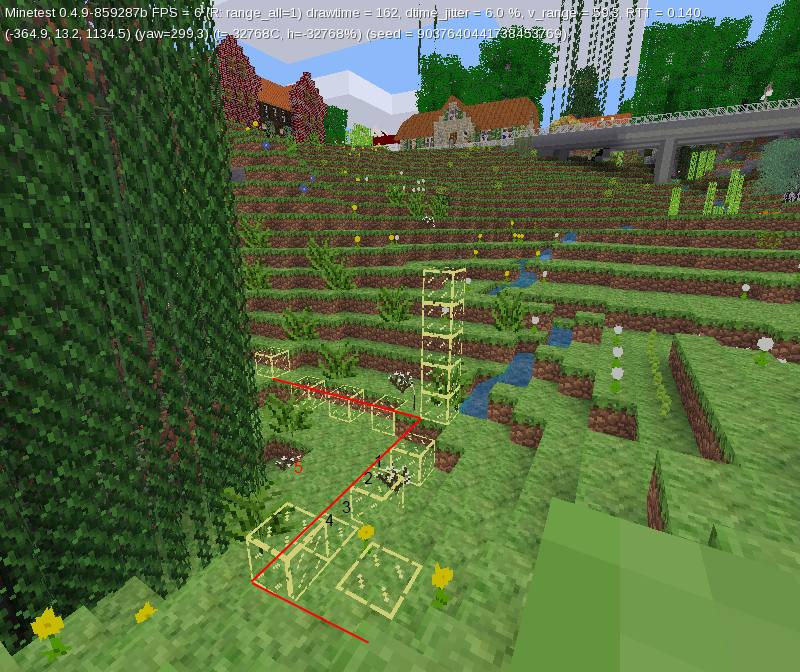 The crashes seem not to be related to a certain client as I have tried different builds with one from 11th March 2014 beeing the latest. It also seems not to be player related as others digging at the same area also cause the server to crash.
Last edited by twoelk on Sat Aug 23, 2014 08:02, edited 2 times in total.

I ran into this problem when I was digging the stream. That is why we first thought water was involved in the server crash. I placed the glowglass to find the edges of the problem nodes (I used sand first but glowglass is better in the dark, so the reason I used glowglass is as trivial as that). I first presumed it to be along some chunk edges or the border of the protected area but both seem not to be relevant.

When crashing the server would return to a state of a little earlier, so the last test nodes were always deleted. Therefore the testnodes to the left of the red line were not saved. It seems that the affected nodes do not have a linear border to the unaffected area. The exact location of the border of the effect is difficult to determine though as the server has some lag and my internet connection is pretty crappy. The time the server takes to react to my actions is rather irregular.

Here's an idea, but I don't know if it will work.


'In a Nutshell' Version

Go to the affected area without triggering the crash.

Make a backup copy of the world to restore from if this experiment doesn't work.

Change the port to a number only you would know and comment-out all the lines that announce the server publicly to prevent other players from logging in while you are working on this problem. If players login while you are working, they will create things that will be wiped out if the world has to be restored from the backup or they may inadvertently cause more problems to arrise because a lua file will be disabled in the next step. Better to limit potential headaches to just the area you are working on.

According to the log you posted, the lua file that is having problems is the .../minetest/builtin/falling.lua. Create a backup copy of this file, delet the original, create an empty file (nothing in it, no code or characters whatsoever) of the same name 'falling.lua'.

Try digging the offending node(s). If doing so doesn't crash the server, use WorldEdit to completely remove a larger section of the area (//set air). By 'completely remove' I mean every stone, dirt, grass, tree... everything, leaving a large, recatangular hole in the ground and air space. This is to remove any other offending nodes you may not have found.

Restart the server and login.

This time, Use WorldEdit to fill the hole with dirt. Then dig/place nodes to landscape the area back to something that looks fitting. Besides making the spot pretty again, you are also manipulating nodes in the area to see if doing so causes the server to crash again. Hopefully not and this experiment has been a successful fix to the problem.

After your landscaping is done, shut down the server again, reset the port to the publicly known one that everyone logs in to and remove the comment hashes from the server announcing lines.

Restart the server, login, and resume the stream project you were working on before this problem showed up.

So after some more server crashing I finally figured out the affected area yesterday. 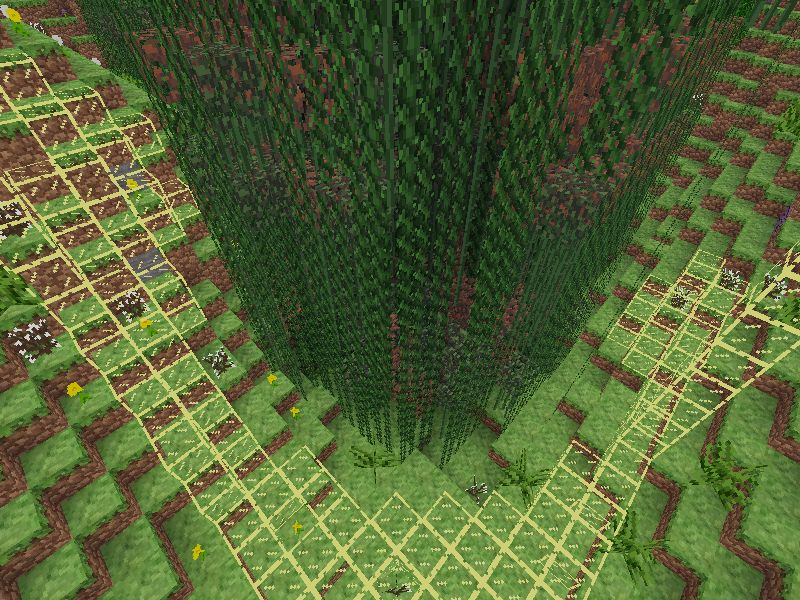 Placing or digging any nodes in the area between the glowglass and the tree crashes the map. It seems obvious the tree has something to do with it. Now that the area is mapped out it really jumps at one.

If one places nodes on the ground near the tree the vine nodes that touch the altered node vanish and so do vine nodes above the disappeared one - and crash. The vines show the same behaviour on other trees, only the server doesn't crash. To make it clear, you do not need to interact with the node the vine is in. The crashing allready happens if you interact with a node that is next to one with a vine and I don't mean the node that the vine is attached to, such as leaves. So that it appears that the crash zone is two nodes broad around the leaves. Testing has shown that the vines are the trigger though or rather their falling. This does not only happen if you destroy a vine that has other vinenodes attached underneath but rather if you destroy the bottom most vine the effect wanders up the vine hanging on the tree.

I'm having real problems with a node called Hardwood. I places some in my area and made mistakes. I can't remove the nodes at all. I've tried every tool and even the hand. Nothing works.
My Mods: Kerova - viewtopic.php?id=8054
My Server: Kalisae - viewtopic.php?id=9040 <--CLOSED UNTIL FURTHER NOTICE!

Me and my daughter visited your server - beautiful and fun!

We'd like interact status if possible, to build our home there.

Our in-game names: "staffan" and "leia".

If you noticed this server being down, it's because this morning I migrated its map to LevelDB for faster access times. Enjoy, and sorry if you tried to play while it was busy. :-)

So do we need interact again? Also have all our buildings been deleted?

Nope, nothing has been changed as far as that goes. This should just make the map load faster than before.

just found your server and it looks great! could you grant me interact? what is home and sethome_other?

Vanessa is there a mod for an electric sign that you type in what you want and it displays it?
Post Reply
1461 posts