Hi! I've dowloaded MT, and facing some sort of error about wrong protocols??

You need the right version MT Client --- a 0.4.x for 0.4.x servers, and a 5.0.0 for 5.x servers ... they are not compatible to each other version
Human has no future (climate change)
If urgend, you find me in Roblox (as CNXThomas)

Minetest 4.x and Minetest 5.x will not work with each other.

For anyone wondering when LinuxGaming will be upgraded to Minetest 5.x, my answer is the same as it was when this question was asked a few posts earlier -- I can't say for certain when. Real life has to come first, I have a full-time job and responsibilities at home that I have to tend to as well as keeping LinuxGaming running and online.

For a little insight, LinuxGaming does *not* run the standard engine or game. Both the Minetest engine and Minetest_Game, along with most of the extra mods, have been tweaked. In some cases a little, in other cases a lot. None of it can be upgraded by merely git cloning from the mainstream versions.

LinuxGaming is also a very old server, relative to most other Minetest servers out there. LinuxGaming's world has never been wiped. It is the same world that the sever started with back in the spring of 2013. As a result, LinuxGaming is a museum of builds that were created in those early days with mods and nodes that have since radically changed or no longer exist. Over the years and various past upgrades, I have taken a lot of care and effort to preserve these builds and the nodes that they are constructed of so that when new upgrades are applied, those builds aren't changed into piles of "Unknown Nodes". Upgrading LinuxGaming from MT 4.14 to MT 5.x is going to require the most old-node-preservation code editing of any upgrade before it. That will take a lot of time and double checking, but for me, it will be worth it.

I realize that because LinuxGaming is so far behind in the versions that folks have moved on to more up-to-date, and now MT 5.x compatible, servers.

I'm not overly concerned about that.

I don't run LinuxGaming for popularity or for player count. In LinuxGaming's history there have been periods where I was the only one to login for months at a time. LinuxGaming is a long term project of mine and a long term server. ;)

Around the time of my last post my old hard drive started to rattle itself to pieces. My whole rig in general was wore-out from years of use and abuse so I ordered a new computer. I had to wait a few weeks for my new rig to arrive. I'm still in the process of getting programs configured and files settled into their new homes in various partitions and drives.

Again, because of the full-time/over-time job and the responsibilities and obligations of home and adulthood, the only time I have had to make any meaningful progress on setting up my new rig has been limited to the weekends. If nothing unexpected comes up this weekend, I should be able to get a new set of overview maps rendered and uploaded. I'm excited to see what 32gb of RAM, 500gb SSD, 3tb HD, 12gb nVidia GeForce GTX 1080 Ti, and a water-cooled, overclocked, Intel i9-7900X 3.30GHz set of processors with hyper-threading can do. :D
MT Server: LinuxGaming2.com, port 30000 - Info: http://forum.minetest.net/viewtopic.php?f=10&t=5684 - My blog: http://lazyjminetest.blogspot.com/

I thought it was the thing.
So can anyone provide link for older version of the game?

Hi Thorton,
what operating system are you running?
if you're running Linux, and you are happy to compile from source code, I can send you a copy of the version that I'm using.

LazyJ wrote: LinuxGaming is also a very old server, relative to most other Minetest servers out there. LinuxGaming's world has never been wiped. It is the same world that the sever started with back in the spring of 2013.

That is of very high value for builders. Thank you for all the good work and for keeping the server running!

However, eventually the switch to a newer version will have to be done. It's not urgent but ought to happen in perhaps less than a year. Redcrabs server did last for a long time as well - until the client necessary to connect became so old nobody ran it anymore.

MT 5.0 has some nice features, in particular minetest.override_item(..) and minetest.clear_craft(..). I wonder if it might be possible/worth trying to put all the server-specific changes into an individual mod. That might make it easier to update mods when needed. Some may still pose trouble though (*looking at Moreblocks*).
A list of my mods can be found here.

During downtime I restored the forum and the wikis to my latest off-site backup dated 2019-03-13 and upgraded the base system to OpenBSD 6.3. Much of the data left on the server was unusable, like the forum database.

Unfortunately that means the latest 6 weeks of data was lost. I'll be looking into implementing more frequent off-site backups to other servers ran by trusted community members.

ContentDB has recorded the missing mod and game titles and the list can be found here: https://gist.github.com/rubenwardy/1cd6 ... 1ffdcbdc4d

I recommend searching your lost forum posts by their title on Google and using Google's cache to recover the content, and to do this in time before they delete it. Feel free to re-post any of your lost content.


So... the forums crashed and about the last 6 weeks of posts went "Poof!" into the aether.

Of those now gone posts on this thread, Miner_48er's link to past versions of Minetest installers for Windows and source files for Linux was probably the most important one.


For MT 0.4.17.1 (player offset is a bit.. off... and texture animations are fubuared but you can still connect to the server):


And for the Linux users who fancy a bit of nostalgia or like to tinker with minimalist setups, here's the link to a much smaller and simpler Minetest -- MT 0.2.2 released back in July 2011:

A "Happy Memorial Day" to the US players and much gratitude to our service members, past and present.
MT Server: LinuxGaming2.com, port 30000 - Info: http://forum.minetest.net/viewtopic.php?f=10&t=5684 - My blog: http://lazyjminetest.blogspot.com/

The server host company sent me an email saying that they will be performing maintenance on their stuff at the end of the month that will result in brief downtime for customers. They think it won't take more than a few minutes but also said that it might take 2 hours.

Mark your calendar for June 28th, 4am UTC for when LinuxGaming will be offline for a bit.

If you are like me and rarely have reason to convert local time to UTC, here's a link to a UTC website, "timeanddate.com" to help you figure out when 4am UTC is where you live:

Heads-up: The VPS company is going to start maintenance at their end in a few minutes.

I've shutdown all of LG in prep for that.

The VPS company said that the process should only take a few minutes but things could take as long as 2hrs.

Update 1: Ok, so the maintenance was completed about an hour ago but I haven't been able to log into the remote server. I've opened a support ticket with the VPS company but it is late night here; may have to wait until business hours tomorrow before getting a response back. : /

It's been a long time uh? 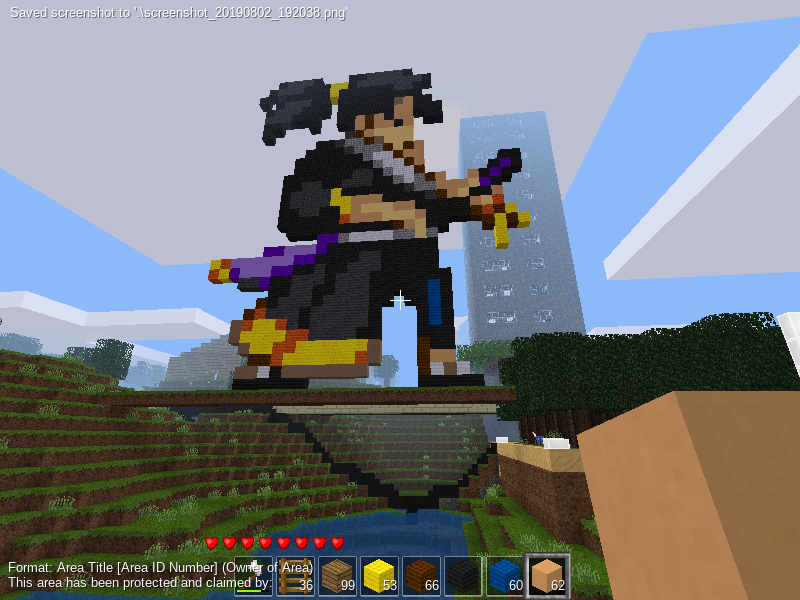 (For other folks reading this: Guinzo has a few other of his works in the surrounding area -- they are all worth checking out.)

One suggestion, not required, just a suggestion -- placing a *locked* sign on the works of pixel art that say the character's name and what game/anime/manga/movie/cartoon they are from, "Built by <playername>" and the date of completion (ie, 2019_08_02, or Aug 2, 2019, or whatever fits).

Because doing so helps document the history of LinuxGaming and it's builds.

LinuxGaming is very unique among the other Minetest servers not only because it is one of the oldest surviving worlds, it is also the original world the server started with. It has never been wiped and LinuxGaming still has it's original builds -- not WorldEdit copies of the originals transferred from a previous world nor WorldEdit copies of builds from other servers. Documenting these builds with locked signs (to prevent sign vandalism) stating who made the creations and when adds to the historical interest of the world.

If anyone is interested, there is an overview map in the first post that covers an area set aside for pixel art. The area isn't well developed yet so there is plenty of open space for vertical or horizontal pixel art (3D pixel art is an idea for the more advanced builders).

Here's a copy of this week's rendering:

And one more bit of business...