Those were mere questions, the answer could be either true or false, or both, I was not trying to make a point but trying to make this player think about his name and what problems it might cause in the near future.

Nothing to really think about unless it contains profanity or sexual content which are usually considered illegal around minors in many regions. He only needs to think about how he handled the situation, which was very poorly. The only problem I find with his name is the excessive use of caps, that is something a server could also ban for, just as if he only chatted using all-caps.

auouymous wrote:-snip
Nothing to really think about unless it contains profanity or sexual content which are usually considered illegal around minors in many regions. He only needs to think about how he handled the situation, which was very poorly. The only problem I find with his name is the excessive use of caps, that is something a server could also ban for, just as if he only chatted using all-caps.

Agree. I guess the only factible reason I see for banning such user is the way he handled the situation after he was banned, so even if it was not deserved at first, now I don't think he is going to get a second chance and/or any sympathy from the moderators, users, or admins.

iska wrote: his bad attitude when I questioned him about it.

asking for the reason of choice is reasonable.

bad reactions to friendly moderators have always ended in bans.
and i also agree with the no caps rule. (and before you complain that it is not written anywhere: "no spamming" is one of the rules. excessive caps use is spamming. and the limitation of caps is not something new we invented for the server, it's a general rule of the internet. it applies everywhere.

the "no dating" rule was set, because there are children on the server, so some caution in name choice is advised too.
obviously any "adult content" names are forbidden, but religious stuff should be handled carefully too.
using Jesus as username might be ok, as long as you don't act as the savior or spread religion in chat.
"son of satan" sounds a little aggressive, as "satan" is only used as bad name and mostly in the bible.
in books and anime, it usually says "devil", so i guess "devil's child" or "beelzebub" might be better if you insist on using a name like this.
in case you choose this name because of the manga character Okumura Rin, then you better use Okumura Rin as your name.
but the actual problem come from the caps. it makes the name stand out, and caps represents shouting.
so it is as if you would scream the name of the devil all over the server.
it might be fit for a Death Metal Music themed server, but not for this one.
this is a family friendly server.

ok, that was a long text, but this should explain why you were asked about your name choice.
the actual reason for ban was your inappropriate reaction towards the question.
building inspiration: viewtopic.php?f=3&t=15550 --- my game: viewtopic.php?f=49&t=15860 --- =(^.^)= nyan~

auouymous wrote:But censoring their chosen names because "they might be derived from religion or other undesirable topics" is way out there! None of you are qualified to judge a person's intentions for the name they chose.

Titanius (Shinjin) has asked that we not get into religious discussions or debates on his server. For the very logical reason that it often turns into fights. (Which is true, and that's a shame. Is too bad that most people can't disagree without being disagreeable) Picking a user name that appears to be, not a name, but a religious comment, is VERY likely to spark religious debates, which is exactly what Titanius does NOT want happening on his server.

It really doesn't matter if any of the rest of us agree with or like the rule. It's Titanius' server, so his rules apply. If we don't like his rules, there are lots of other servers out there, we can go play somewhere else.

PS: That was just an update..

Server was updated to use default beds instead of pilzadam's bed mod, so now players can sleep at night and if more than half are in bed it will change to daytime. Phiwari123 looks quite creepy when he is sleeping! He even has pickaxe ready!

Dragonop wrote:4- Do you understand that your username might be offensive for some people?

Do you know how many people are named Jesus, Christian, Michael, Gabriel and other names derived from religions? Do they all need to use aliases if they join the server? What about names like Zeus (popular name for characters in movies and games) that come from other religions, are these names off limits too? Lot of different religions around the world with a lot of common names in them. What about all of the alternate names religious figures have used through out history?

Or Mohammed; I know a handful of people named that.
supertuxkart.net

All things are possible except skiing through a revolving door.

Whoooa, now that is a crater. 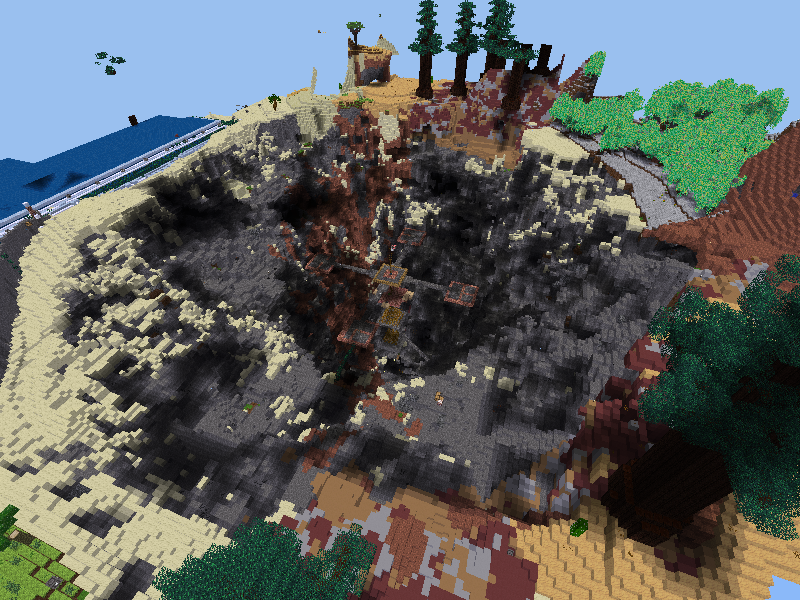 This is a friend of yours. As you see, your Igor is my hostage now. If you want to see him again, throw 30 apples to my mailbox at Altamer, and the coordinates, where i should to return your pet. And hurry up, or Igor will be my servant for eternity. The well-wisher. 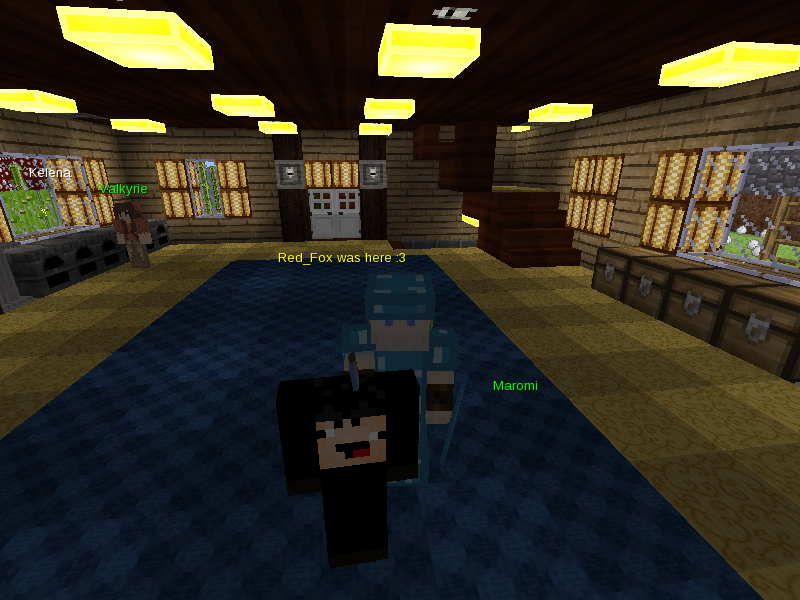 Einszone wrote:This is a friend of yours. As you see, your Igor is my hostage now. If you want to see him again, throw 30 apples to my mailbox at Altamer, and the coordinates, where i should to return your pet. And hurry up, or Igor will be my servant for eternity. The well-wisher.

I never been so DISGUSTED and DISAPPOINTED with anyone on this server before as i am with you. I thought you were a good guy, i was so so wrong...

We caught him red handed multiplying THOUSANDS of rare admin given only blocks (lucky blocks). And probably all other items he had were cheated to the game too. No wonder he had so much of EVERYTHNG.

But you did such a great work! Congratulations!

Don't destroy my builds, give them to someone, who deserves that. I'm tired. I am so tired and bored. That's why i didn't tell you about that glitch. I was waiting a lot for someone who could catch me cloning items and finally i waited. Hope I harm you not a lot.
Builds list:
Zeppelin in Magicville;
Hotel and subway near Midville;
Home and shop in Altamer;
Blue Tower in Aurora;
Railway in Cacti

I already knew about the glitch long ago. I would like to claim the tower in Aurora, but that depends on Ten or Titan...
Last edited by Dragonop on Tue Jan 26, 2016 19:28, edited 1 time in total.

Dragonop wrote:Don't worry Einszone, I already knew about the glitch long ago. I would like to claim the tower in Aurora

If you knew about it, you should have told to admin.

Personally i think all his buildings need destroying, since they are made of blocks that he got from cheating.

I did Ice, two times, I was the one updating Ten about it everytime it appeared again.
Edit: Please avoid making asumptions and don't read between lines, everything that is said is just that, if you doubt about it, just ask, don't launch acusations.

Edit2: Heh, I guess destroying the buildings is an option too. What a waste

Einszone:
Because you show no shame, I personally think that your builds should be removed (or transferred to another player's ownership). You should not be given credit for something you cheated for.

Texan wrote:Einszone:
Because you show no shame, I personally think that your builds should be removed (or transferred to another player's ownership). You should not be given credit for something you cheated for.

Because he cheated the items doesn't take the credit that he built it. Indeed is unfair that he had unlimited supplies, but it still takes time to build things...
Destroying them would do any difference to the situation... The best thing to do here is letting them as they are (If they are nice builds and liked by the peeps nearby them ofcourse) and ban the cheater instead of bringing all this drama and "shame" thing... :P

Thank you for your opinion. :)
The player has been limited.

After more than 1 year of playing on this server, i decided to leave the game and concentrate to my real life.
I wanted to go out with a "bang", and I did it!
This server was need that kind of incident, do you agree?
Just look around you: people are walking everywhere, doing useless things.
No events, no actions, no fun.
Killing the mobs? Oh, dare you, they are as harmless as flies.
As i said before: "This is survival server, not a [Unicorn Land]".
So, I hope that you, dear admins and moderators, will make the real survival server (for example, like the Clip server was, without unbalanced lava-proof crystal armor) or finally turn it to creative mod (or whatever it called).
There should not be the "hybrids".
But I am me, and you have every right to disregard my words.
I just want you to stop acting like a kindergarten kids.
Remember that, folks.
Once again good bye.
Post Reply
3712 posts