I took screenshots from when I joined: http://imgur.com/a/c7UF9

No, the troll maybe you. Why did you took my land exactly? You're trolling every creative user? You're not admin, and you wouldn't never be a moderator.

"I prefer nice looking building" Skrote. And Iska like a mafia gangster 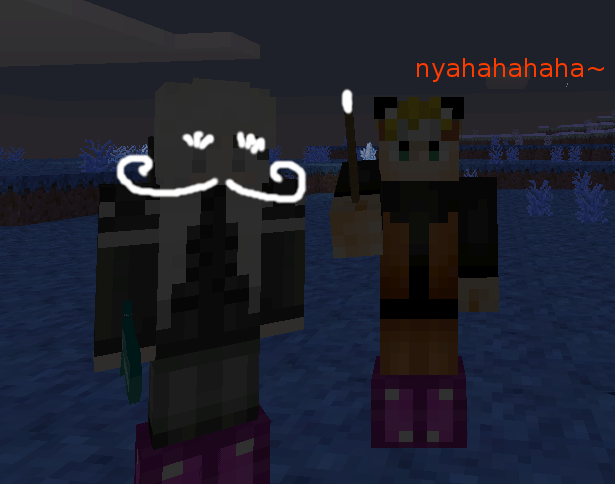 Just the only people could build and be creative are these nerdy moderators. They're lying that my house is near at spawn. And if they wanted these fields for them, why they didnt removed? they just wanted to ban me for nothing.

you stablish the rules an changes everytime. You change the rules, for justify your actions. I dont care what you say and your terms. Because you're harassing users.
Last edited by Poyongo on Fri Apr 15, 2016 13:33, edited 1 time in total.

Poyongo wrote:Just the only people could build and be creative are these nerdy moderators. They're lying that my house is near at spawn. And if they wanted these fields for them, why they didnt removed? they just wanted to ban me for nothing.

You were limited cause of your attitude and rudeness, not because of the lands.
You can talk here all your want and keep making insulting remarks like "nerdy moderators",
but it wont change anything.

Noone will give you privs back after the way you have acted.
Please be mature about it and let it go.

No... the only people with wrong attitude are you. Why did you banned me just because you told me that you would remove my fields. That's abusive. And then... I just told what you were doing. You were harassing me. You were threatening me if I would refuse to move. That's absurd. I was there so many days ago and you didnt said anything. But later I built. Shameful.

Let's pretend you had moved when they had asked...
You would have:
All of the protectors
diamond and mese wing from Bonny
Mese block from noob
rail
Other stuff I didn't notice when I saw your build...

Now, assuming you haven't got your privs back, you have:
nothing...

Maybe it should be made a little more clear where you can and can't build; but if you had accepted Bonny's very nice offer, we wouldn't even be discussing this.

(As far as no one else being good builders... did you even SEE the huge spawn building that you built "far from"? iska built the whole thing.)

Poyongo wrote:No... the only people with wrong attitude are you. Why did you banned me just because you told me that you would remove my fields. That's abusive. And then... I just told what you were doing. You were harassing me. You were threatening me if I would refuse to move. That's absurd. I was there so many days ago and you didnt said anything. But later I built. Shameful.

All 5 moderators were talking to you nicely at first. We offered help of moving the farms, we offered you free rare items for your troubles. Noone asked you to remove the shop, from what i understood, just the farms. And it was Skrote's road, but you just seem to enjoy bashing iska for everything.
You were very very rude towards us and just kept saying you don't care, when we tried to explain you things politely.
Also you made other account satanclaus, to keep arguing on chat.

I just want to point out that NERD is a compliment, not an insult. :)

You're bullies. One question: you banned me because I did my building 'near at spawn', than that's not true, or you're angry because I built a nice building?

iceage I said that after my dissapointning about you - the moderators.

You firs said that it was because I had so much land, and then, you harassed me. That's not justified.

Poyongo wrote:You're bullies. One question: you banned me because I did my building 'near at spawn', than that's not true, or you're angry because I built a nice building?

This is going too far. Now you cut out a part from screenshot where bonny says "i am gonna kill you", just to make her look bad.
While in reality it was conversation between me and her only and it was a joke. And wasnt towards you at all.

I dont care what happen on server. I just want to clear what's happening... You trolled me, harassed me, and banned me. That's not good.

no. you're the TROLLERS.

Ill put a review of this server on https://github.com/minetest/minetest/issues/3068

Now it's getting absurd. Poyongo, satanclaus, hellomickey or Moringa, twisting the truth and telling plain lies doesn't help you. Not a bit!
All you can do now is admit that while you were right in the point that you had that spot and built there, you screwed it in the end by getting abusive. All else we could have talked about, but you just blew the fuse.

I am actually totally disappointed in you. Until yesterday you were so nice, I had never expected such a reaction from you. Well, I was mistaken. Bye bye. noob101

Oh and by the way, if you continue to post the same pictures over and over, I will ask the forum administration to block you for flooding the forum. Thank you.

Believe it or not, I'm going to attempt to give you some friendly advice. Please read it through and THINK about what I'm saying before just assuming that I'm out to get you, ok?

Here is the problem Poyongo, I wasn't online when the original problem occurred, but judging by what I'm seeing here, you are NOT making a good case for your side.

You pulled a quote from bonny out of context to make it look like she was saying something she wasn't. Why should I trust anything else you say if I already have evidence you are trying to deceive me? I was suspicious about that quote the moment I saw it because it looked like it was out of context and the rest of the conversation was not there anymore. This doesn't help your cause, it hurts it.

From the conversations you are posting, YOUR posts, I see the moderators asking you to move, and offering compensation (Something I don't know if I've ever seen before), and instead of discussing it, you throw a temper tantrum. And on here, you are the one throwing a fit and calling names.

What I hear from the moderators: He claimed a huge amount of space very close to a main road, within a sight of spawn. We didn't think it fit with the theme and asked him to move, we offered him compensation. Instead of discussing it, he lost his temper and caused such a ruckus that we limited him.

From your behavior on here, I see no reason to question that story. It appears that you were limited for loosing your temper and yelling at everyone.

So, again, please listen, I AM trying to help you here.

You have some legitimate questions. These are: How is too near spawn defined, what is too much space, and why can't I plant farms just because someone else thinks they are ugly? I believe that it is probably BECAUSE some of these questions are legitimate ones that the moderators were offering you compensation to move. They weren't coming to you and saying you did something BAD, they were saying your design didn't fit with their plans for the server, and were trying to negotiate a settlement that would make everyone happy.

The problem is that at this point, instead of negotiating and discussing, you lost your temper and started calling everyone names. And here you are clearly ranting and raving, calling people names, and actually putting up false information. These things do NOT help your cause, they hurt it.

You would do much better by trying to have a calm and rational discussion about what the rules should be and who should be able to build where, and what, and what the powers of the moderators are. If you had come on here and said, "I'm being forced to move. I don't think I violated any of the written rules. I would like to discuss whether the move was unfair, or whether the rules need to be clarified" You probably would have gotten a LOT more sympathy, and might have even ended up helping to improve the server overall by getting a rational discussion going that might have reduced the chances of this happening to someone else.

I think it's probably way to late on this particular issue. By losing your temper, and especially with the deliberately out-of-context post, you have pretty much thrown away your chance to have anyone listen to you this time. So, my advice is for the future. Next time, instead of losing your temper, stay calm, discuss your objections rationally, and you will have a better chance of having people listen to you and address your concerns.

<and now that I've finished this post, I see that while I was writing it, noob101 said the same thing, but better and shorter. I doubt if you will listen to me either, but I'm going to post anyway, just in case you might>