There are four types of display devices: the old-fashioned Nixie tube, which uses a generic/common design and displays the digits 0-9 (plus colon and period in this design), a Decatron tube similar to ETL/Baird Atomic GC10B, which displays its value by lighting up batches of "pins" on its face, an "alphanumeric" Nixie-like tube using a 14+1 segment display similar to the Burroughs B-7971 tube, and a Numitron design similar RCA DR-2115 (but using a 7+2 segment display with period and colon).

Place one, right-click it to set a channel, hook up some Digilines wires and a Lua Controller or so, and send the symbol you want it to display as a Digilines message. Decatron tubes can also be wall-mounted. A stripe indicates the "1" position on those.

The classic Nixies and the Numitrons respond to the numbers 0-9 and the words "colon", "period", and "off", while the alphanumeric Nixies will respond to the entire ASCII character set (32-127), the above three control words, plus "del", "allon", and "cursor", and they can display strings across multiple tubes.

Decatron tubes respond to 0-9 and "off" to directly set their states, "inc" and "dec" to bump the value up or down, "get" to read the current value back into your LuaController program, and they'll send "carry" or "borrow" as a message if the count overflows or underflows.

The string will spread down the line until either a tube is found that faces the wrong way, or has a channel that's not empty/nil and is set to something other than what the first is set to, or if a node is encountered that is not an alpha-numeric tube at all.

Tubes to the left of the connected one are ignored (unless they, too, have their own connections).

You can put multiple lines of tubes end to end to form independent displays, so long as the tubes that start each of the lines have unique channel names set.

The string is padded with spaces and then trimmed to 64 characters.

Any unrecognized symbol or character outside the ASCII 32 - 129 range, whether part of a string or singularly is ignored.

Only the alphanumeric tubes support strings.

These tubes emit a small amount of light when displaying something.

Since these are meant to be driven by Digilines signals, only the "off" ones for all four types appear in the Creative Inventory. Use /giveme to get the others if you're not using Digilines (this is how the two middle Nixie screenshots were created). Node names are of the form "nixie_tubes:tube_{0..9, 'colon', 'period'}" for classic ones, "nixie_tubes:alnum_{ASCII char code}" for the alphanumeric ones, or "nixie_tubes:decatron_{0..9}" for the Decatrons.

No crafting recipes have been made for the Decatron yet. 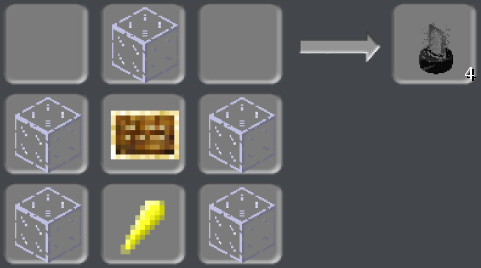 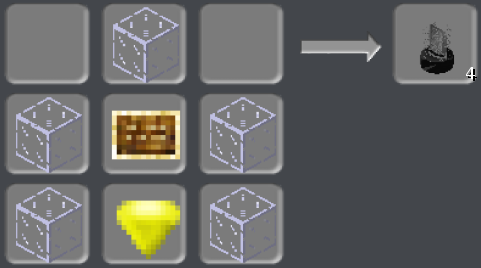 Alphanumeric tubes use the same recipe, but with a whole mese crystal instead of the fragment. Yields 4.
Additional screenshots:
+ Spoiler

These Decatrons are showing a combined count of 4128. 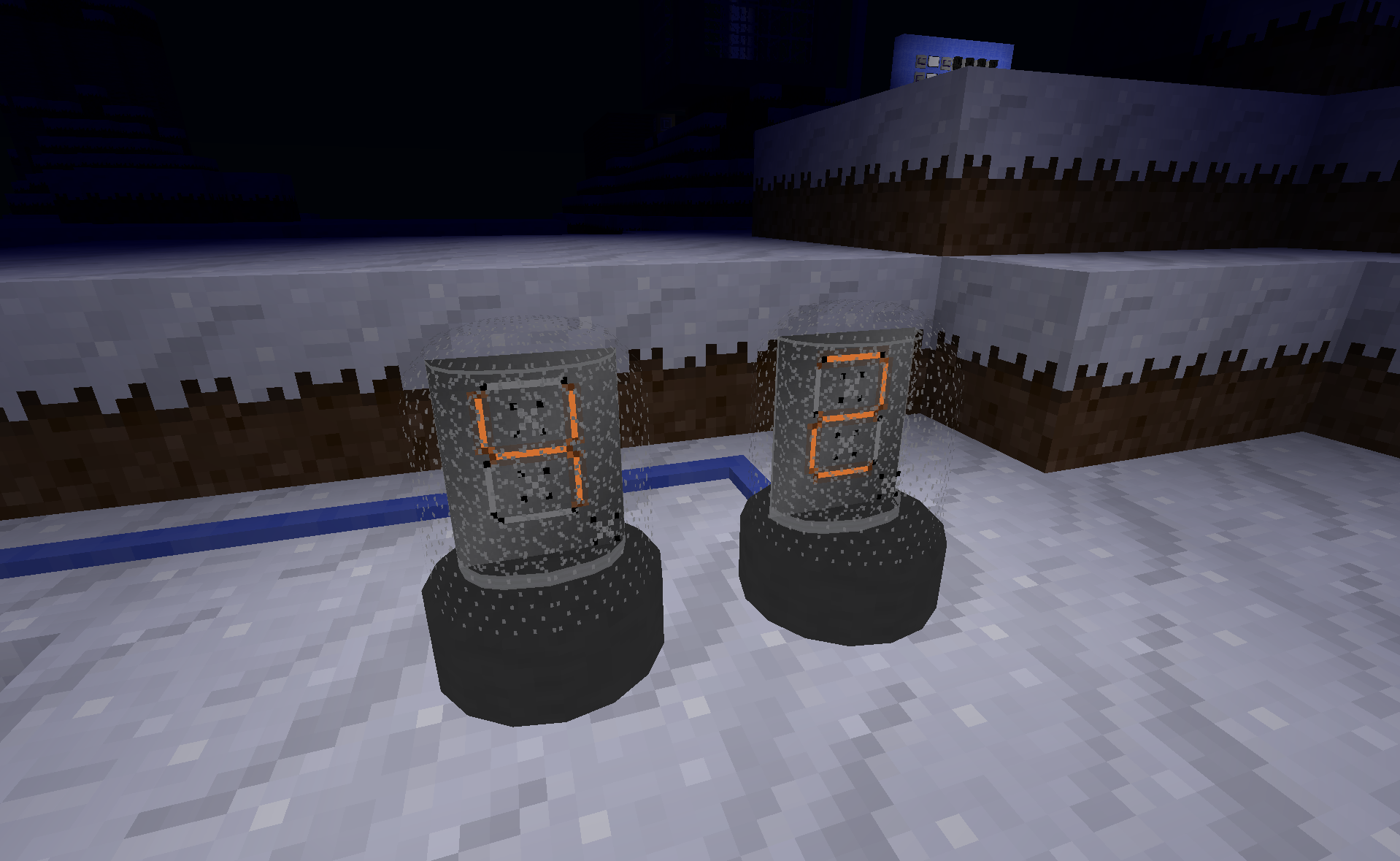 Numitron screenshot by cheapie
Example Lua Controller code:
+ Spoiler
This snippet of code displays one character in response to a signal input from somewhere:

And a variation of this code runs in the single LuaC that's controlling the four Decatrons:

(each tube in the associated screenshot is on channels "tube0" through "tube3", from right to left)

nixie_tubes-recipe2.png
(26.48 KiB) Not downloaded yet

nixie_tubes-recipe1.png
(25.75 KiB) Not downloaded yet

nixie_tubes-decatron.png
(168.36 KiB) Not downloaded yet

Interesting, I have never seen this digit-display method before.
How about a dash "-" sign?
Look, I programmed a bug for you. >> Mod Search Engine << - Mods by Krock - DuckDuckGo mod search bang: !mtmod <keyword here>

I could add other symbols easily enough, but a "-" isn't especially common with Nixie tubes (though there are some designs that only display symbols like % or °C or so, but not numbers). I wanted to keep these more or less the same as the real things, which generally only have a dozen or so numbers and symbols to pick from.
You might like some of my stuff: Plantlife ~ More Trees ~ Home Decor ~ Pipeworks ~ HDX Textures (64-512px)

Update: I've added a set of alphanumeric tubes to the mod, in the form of a 14+1 segment display (similar to Burroughs B-7971, with the same wire layout). It has full ASCII support, and also responds to a few control words (see the README).
You might like some of my stuff: Plantlife ~ More Trees ~ Home Decor ~ Pipeworks ~ HDX Textures (64-512px)

Here's a clock using it, based on the Mesecons Laboratory clock. It expects a digilines RTC on channel "clock", a blinky plant on any pin, and nixie tubes on channels "tenhour", "hour", "colon", "tenminute", "minute", and "ampm", in that order. "ampm" should be alphanumeric, the others plain numeric. Oooh, looks awesome! What about adding some form of high-voltage driver that you would need to power them?

Think of it as having a digilines-to-HV multiplier/driver magically, invisibly embedded in the black casing at the bottom ;-)

(Really, doing so wouldn't be hard, but I don't really see a use for that)
You might like some of my stuff: Plantlife ~ More Trees ~ Home Decor ~ Pipeworks ~ HDX Textures (64-512px)

Looks nice! I'm sure a lot of places could be marked with larger "signs" that way.
A list of my mods can be found here.

Indeed, using an entity for the display would reduce the total number of nodes to just two, but entities suck right now. Too buggy.
You might like some of my stuff: Plantlife ~ More Trees ~ Home Decor ~ Pipeworks ~ HDX Textures (64-512px)

Another update: Better textures for the Decatron tubes' cathodes.
You might like some of my stuff: Plantlife ~ More Trees ~ Home Decor ~ Pipeworks ~ HDX Textures (64-512px)

how exactly are you supposed to use "get"? I tried

but that overheats the microcontroller somehow...

12Me21 wrote:how exactly are you supposed to use "get"? I tried

but that overheats the microcontroller somehow...

You're firing off a "get" message on *any* event there, which includes the reply, forming an infinite loop. Make that first line only run on on "on" or "off" type event, and connect a blinky plant to the LuaC.

Thanks to a contribution from cheapie, this mod now has Numitron tubes similar to RCA DR-2115.
You might like some of my stuff: Plantlife ~ More Trees ~ Home Decor ~ Pipeworks ~ HDX Textures (64-512px)

This project has been moved to Gitlab.
You might like some of my stuff: Plantlife ~ More Trees ~ Home Decor ~ Pipeworks ~ HDX Textures (64-512px)

Update: this mod can now display strings across multiple alphanumeric tubes (but not the other types) that are placed in a line. See README for further details.

First of all: thank you so much for all the goodies you provide to us! :D

Second: just a feature request / an idea for a future update...
The decatron (just one properly enabled) every tenth update might send a message to a second channel or pull a signal up for some time (like a mesecons/digilines button)... :D
Happy builds & explorations! | Initiating my Creative Minetest channel on YouTube
Post Reply
20 posts • Page 1 of 1