A collection of tools to help you orient yourselves in the world, such as compass, altimeter, etc. 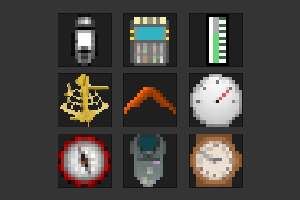 Orienteering tools are enabled as soon they are anywhere in your hotbar and they enhance your HUD. Available tools:
Leftclicking while holding a tool capable of displaying time will toggle between 12h and 24h mode.

Note: In this mod, the minimap is not available for free! You first have to earn it by aqcuiring an automapper or quadcorder. Crafting recipes are available when you play Minetest Game or a similar subgame.

- Added intllib support
- Added German translation
- GPS device and quadcorder can be used to toggle 12h/24h mode as well
- Add one more digit of precision for pitch and yaw
- Remove one digit of spurious precision for speed
My creations. I gladly accept bitcoins: 17fsUywHxeMHKG41UFfu34F1rAxZcrVoqH

Well, I included the sextant because I could. :D

One use case I had in mind while creating this mod was some kind of treasure hunt, where you have to use the data you get with your tools to hunt treasures.

Like a treasure hunt with notes like “go 432 steps to North, then dig” or “go 5 steps when the compass shows 45°”. And in case of the sextant, one step could involve you first reach a very specific position, then look at a wall at a certain pitch, and behind the block you are looking at there's a treasure. Or you have to look at a landmark and note down numbers which you then have to enter in some hidden keypad. And, and, and …
I'm sure there are other ideas on what to do with all the tools (besides orientation), just be creative. :-)

Treasure hunting will not be part of this mod, but it is an idea what you could use the tools for (besides mere orientation).

I am still hoping to hear feedback about the textures, HUD, gameplay and crafting recipes.
My creations. I gladly accept bitcoins: 17fsUywHxeMHKG41UFfu34F1rAxZcrVoqH

This is a really great idea. I like how it makes having the coords and such a privilege that you need to "earn" rather than just having them right there for everybody.
I record Minetest videos, Mod reviews, Modding tutorials, and Lets plays.
Check out my website, and brand new Minetest Modding Course

This is very neat. I like the "no-shortcuts" idea of basic tools as building blocks for the more advanced ones.

I was wondering if code from compassgps and gps could lend itself to the corresponding items in this mod. compassgps have live updating of the compass needle that would also fit here. And gps mod have a waypoint feature. So it would be cool to not have double sets of tools but one…
Mods | Support Mesehub: bc1qluuests9rxmlnvpjrhsnyjg9ucwy6z3r0y3srw

Can't you just do F6? :D
It's lisac, not lisa.
400 character limit? Am I writing a book?
Administrator on Craig's server. Minetest player.
"The enemy pales when they see the face of Dazzle!" ~ Dazzle obviously.
I live in Serbia.
Steam | OpenDOTA
My mods:
Tool ranks
I appreciate donations in TF2 items. :)

lisacvuk:
F6 is not helping you, this is just the profiler screen. :P
You mean F5, this is the debug screen with coordinates.

Yes, it's true, you could just use it, but this will defeat the point of this mod. I was aware of this all the time, but I implemented it anyway because I wanted to add a “legit” way to expose coordinates.
For now, you have to resist the temptation. ;-) You could add “keymap_toggle_debug = none” into minetest.conf to disable the debug screen to avoid accidentally enabling it.

I think Minetest release builds should just disable all debug stuff anyway, at least by default. When this has happened, this mod will become much more relevant, I guess. xD

But maybe I could try to implement a simplified version of the waypoints feature for the GPS and quadcorder, with a small (!) set of waypoints. This would also mean the GPS becomes slightly more useful than its combined parts.
Compass needle would also be interesting but I have no idea where I should point it to. If you have just the compass alone, you are only supposed to know about the yaw. So you can't just enter random coordinates as a reference point, that would break the basic idea.
Maybe I could do some kind of “magnetization” which makes the compass point to ONE previously visited point so it doesn't become to overpowered.
Another idea I had was adding the possibility to measure angle differences. Like you click one trime with the sextant, then move up and down and the display shows you the angle differnence between the angle where u clicked at and the angle where you look.
I could maybe try to think about more unique features for the particular tools, in addition to “just” exposing coordinates.
My creations. I gladly accept bitcoins: 17fsUywHxeMHKG41UFfu34F1rAxZcrVoqH

This mod corrects the prblem of me, always losing my home :D
ＯＭＩＣＲＯＮ - pre-release 0.7 "Tweaky Update"

Wuzzy wrote:You could add “keymap_toggle_debug = none” into minetest.conf to disable the debug screen to avoid accidentally enabling it.

Thanks, I wasn't aware of that setting.


Wuzzy wrote:But maybe I could try to implement a simplified version of the waypoints feature for the GPS and quadcorder, with a small (!) set of waypoints. This would also mean the GPS becomes slightly more useful than its combined parts.

Yes, this is what I actually had in mind. The compassgps mod is way over-powered for being a compass. I simply meant you could pull the code that made the needle dynamic, then having it always pointing north. Perhaps it wasn't clear that for gps functions I meant looking into this mod. It is also called gps but has excellent waypoint and wayfinding features (much more intuitive and "in-game" than compassgps), that could be merged into the features of your gps tool.
Mods | Support Mesehub: bc1qluuests9rxmlnvpjrhsnyjg9ucwy6z3r0y3srw

Outstanding piece of work, need this immediately for my City Survival server, will give some as initial gifts to new players - on a city (Duane's incredible v1 cityscape mapgen/game mod) that covers the world, players need to know where they are...

Updates:
- Add achievement for rubenwardy's awards mod
- Add in-game help texts (support for doc_items)
- Change and balance the crafting recipes
- Fix incorrect range of pitch display (was: -180° to 180° while in fact it's only from ca. -90° to ca. 90°)
- Use “Sie” in German translation
My creations. I gladly accept bitcoins: 17fsUywHxeMHKG41UFfu34F1rAxZcrVoqH

My students and I have been loving this mod! It is so perfect for our "hardcore survival" server. Thanks for your hard work :) I do make sure to yell at them if I catch them trying to use F5 ;D
Become A Real Life Superhero - http://SuperheroHill.com
Project Lead of the Doom 3 Mod Last Man Standing - http://Doom3Coop.com
Project Lead of Platinum Arts Sandbox Free 3D Game Maker - http://SandboxGameMaker.com
Youtube Channel - https://www.youtube.com/user/PlatinumArtsKids

exactly. i like this mod for that same reason. Thanks wuzzy.
My Villagers Mod: [villagers]

My only comment would be the position of the information. At the top center, it is quite distracting.

I try the bottom left corner

It is maybe not visible enough... it probably depends on preference. Maybe with a different background like the hotbar it would be more visible.

Just a heads up, my students found out that there is a conflict with the altimeter and the metal pole from the streets mod. I made it to be the 3 steel and 3 glass. They're all really loving the mod!
Become A Real Life Superhero - http://SuperheroHill.com
Project Lead of the Doom 3 Mod Last Man Standing - http://Doom3Coop.com
Project Lead of Platinum Arts Sandbox Free 3D Game Maker - http://SandboxGameMaker.com
Youtube Channel - https://www.youtube.com/user/PlatinumArtsKids

Version 0.4 of the Orienteering mod has the following changes:

- Tools now are only active when they are placed in hotbar. Just placing them in the inventory is not enough anymore. (tell me your opinion on this)
- Add minetest.conf settings for setting the HUD text positioning (see “advanced settings” menu)
- Speed display changed: It now displays horizontal and vertical speed seperately instead of the 3-dimensional speed
- Bugfix: Speed display showed incorrect speed when player was attached (e.g. using a vehicle)
- Recipe of altimeter changed; it requires now 1 glass and 2 steel ingots
- Empty lines in the HUD removed
- Fix outdated README
- Refactoring

This mod is now in Beta stage. I do not plan any serious gameplay changes anymore. After a while of testing, I will consider to officially release version 1.0.
My creations. I gladly accept bitcoins: 17fsUywHxeMHKG41UFfu34F1rAxZcrVoqH

For people who like to experiment with new stuff, here's a goodie for you:

Experimental version of the Orienteering mod with binoculars:
http://repo.or.cz/minetest_orienteering ... 53afe5.zip

In this version, you may only zoom when you wield the binoculars.

This version of Orienteering is experimental and only works together with the latest developer version of Minetest. You may use this for testing and/or fun, but no guarantees given. Only the recommended Orienteering version (see first post) is officially supported.
Last edited by Wuzzy on Sat Nov 19, 2016 00:19, edited 4 times in total.
My creations. I gladly accept bitcoins: 17fsUywHxeMHKG41UFfu34F1rAxZcrVoqH