How does one "join" a faction that is not Sam

Also suggestion: make the api support troops that actually follow your orders, and archers that don't just go in mele (they have a freaking bow with arrows and they sometimes mele with their secondary weapon (stone sword)) and die

Stay tuned for a youtube minetest movie of the empire vs rebels starring this api
My modding team: https://github.com/basilea-rhomaion

the bots can use / craft boats now

Why not a configuration file setting?
Every time a mod API is left undocumented, a koala dies.

i will try to add it, because it's would be helpful for some users.

in 4.88
use / craft carts
its still a bit glitchy, becaouse the boat/cart use are kinda hacks

Finnaly my minecart roads in the level 10 imperial cities in my mod have a use :D
My modding team: https://github.com/basilea-rhomaion

Wow!! You have so many interesting ideas for your mods. I feel like now it is just a matter of time until they are driving cars haha. I imagine the boat riding code could even work for that though they'd probably drive super randomly, hmm!!!
Become A Real Life Superhero - http://SuperheroHill.com
Project Lead of the Doom 3 Mod Last Man Standing - http://Doom3Coop.com
Project Lead of Platinum Arts Sandbox Free 3D Game Maker - http://SandboxGameMaker.com
Youtube Channel - https://www.youtube.com/user/PlatinumArtsKids

they drives the boats randomly, but there is timers within 5 - 10s (9 times) each time they turns, and exit the boats if they not are moving, like if they hits a wall.

i would like to make a function, so they can run the mostly vehicles / mods, but the problem is, if it causes crashes.
XaEnvironment Mods content repository

That way there could be commander vs commander pvp
My modding team: https://github.com/basilea-rhomaion

+ can change team, by using the "Gift to team"
punch bot from another team to become their member (aliveai:team_gift)

worker (click to show what to do) (is white / red)
you can make them dig / take stuff from an inventory / chest
and place / put in a inventory, then they will keep doing this.

the bombs will use on_blast (effects mods like tnt)

WOAH, the worker is what i was waiting for, I am going to start recording a mod reveiw of my addon soon

EDIT: the github version is unupdated, good I thought the ants were the workers lol, they are cool and all but a little hostile and not humanlike lol, but anyways they are a cool idea

Suggestion: maybe custom messages for each bot?
example:
the imperial trooper could say NEVER SURRENDER MEN (and women (and childeren if a super sesprate city defence))! when he sees an enemy

EDIT2: THEY CAN RIDE FREAKING HORSES! FINNNALY I CAN HAVE SOME CALVARY! DOWNLOADING KPGMOBS RIGHT NOW!

EDIT3: The workers are hard to program, i have no idea how to make them dig, so i just electroshocked mine like a freaking sith lord (i love high voltage core)
My modding team: https://github.com/basilea-rhomaion

like a bot that can command all his members to attack at same time?

i will add "worker" to the worker bots (forgoted it)
and add this desciptopn to the readme file in the "trader" mod
dig:
list nodes names and groups to dig, like:
"default:dirt,default:tree,group:stone..."

First, thank you for this mod. I've installed and tested it already.
But, actually I'm a bit disappointed. The mobs don't build anything (a few of them just dig in the ground) and all of them are attacking me after a while. That should bei different, shouldn't it?

yeah, they are pretty lazy, and are looking for stuff they maybe never will find (is timelimed to 200s, then they ignore the items step by step)
they will build when they have everything they want...

they (the mostly of them) will build a standard model of houses, that is generated with different sizes and furniture
(use the hidden tool "aliveai:copy" to make code, customized bots can use to build)

and yeah, they should not be that annoyed,on you because you are near them :-) (timer issue)

Ummmm.... when I say dig default:dirt it asks for coordinates
My modding team: https://github.com/basilea-rhomaion

That is an android error, the reason why I only use this mod on PC
My modding team: https://github.com/basilea-rhomaion

i wil convert the files to UTF-8 next time, it has been a lot of changes the last days, so i skiped it.

you have to type settings in the both feilds, so the bot know what to do.

@AiTechEye The current format is UTF-8 bit one with BOM that should not be used:
More infos about it http://stackoverflow.com/questions/2223 ... ithout-bom

For Linux-users I posted already the conversion command-line: 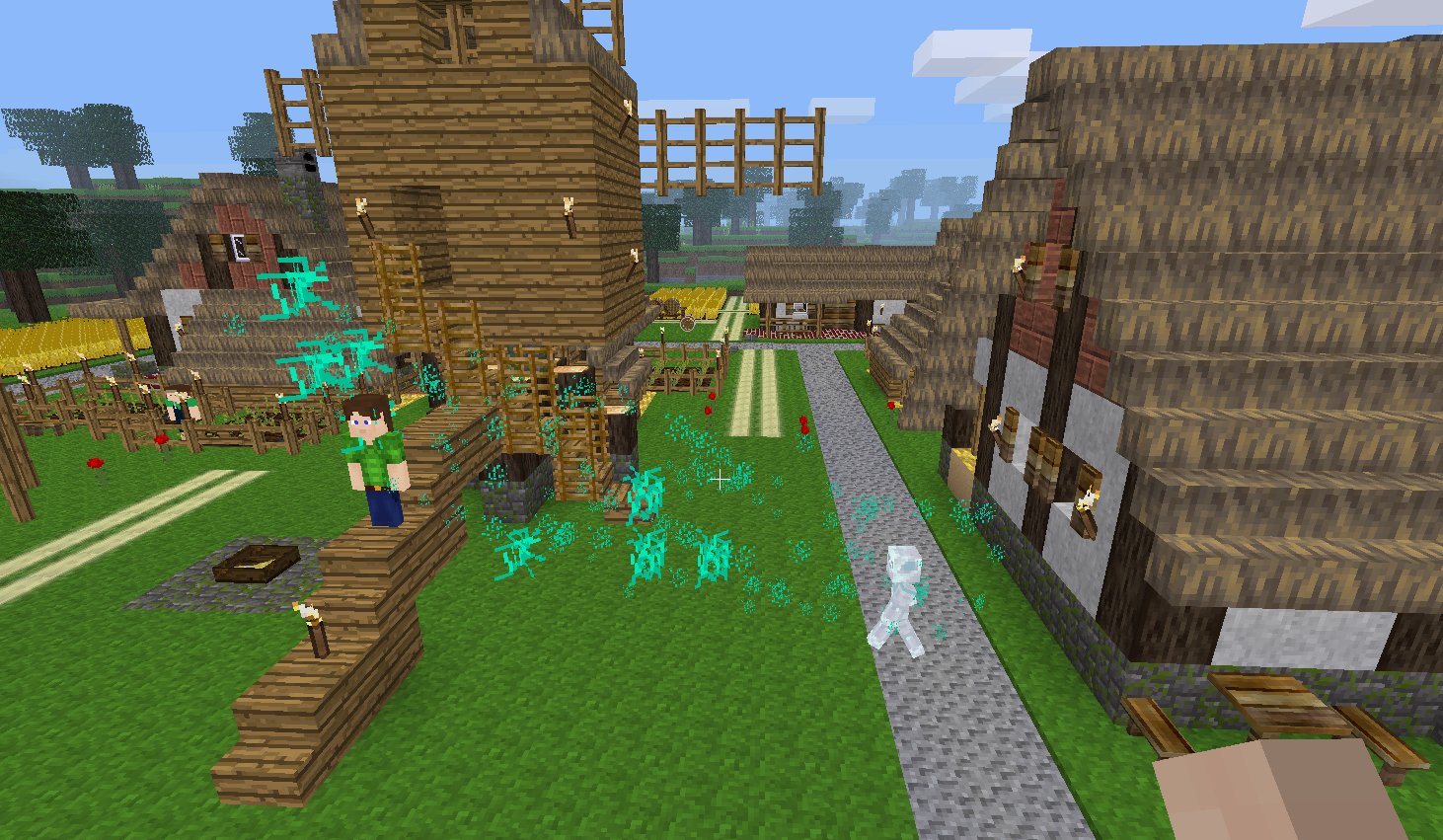 It's great to have mobs running around. Is there a way to turn the hostile ones off? At least the most aggressive variants. The eyes in the trees are somehow cute. Is the chat just random, or do they want to tell me something when I right-click them? Anyway...there are quite frequently players on servers who do not behave as intelligent as these mobs. Thus, the first step in AI has certainly be reached :-)

So far I've discovered no real pattern to their building attempts. Giving them all they want doesn't help much either. They place some random glass nodes, wood nodes and the occasional furnace. The larger pattern is missing. Perhaps they can make use of my recent changes to handle_schematics? All they'd have to do once a schematic has been placed is to keep out looking for two specific nodes in their environment and either dig down or place the node according to the metadata found in the scaffolding node. Plus start the check-if-all-nodes-are-at-the-right-position-process for not yet finished buildings from time to time. It might also get tricky to get new materials - after all if you're a mob and need to get some tree nodes it might not be the best idea to just walk over to the last house placed and dismount that. Planned tree farms might be a good idea. Also mining might better be done by digging down in one dedicated area. Let's hope the tree farm guy comes up with enough sticks to make ladders...

mobf_trader is created in a way so that it can be used by other mob mods as well. And there are some quest systems out there for "real" talks with mobs. Eventually integrating all would be very very nice I think :-)

they using a kind of schematics system, all new bots will get a generated code / instruction that they will use to build.

a thing that makes the bots fails to build is, that they just placing their stuff before they builds.
the reasons is, they builds when they not can reach their targets.
"bridge": builds bridges to reach over like cliffs, lava, fire... (fixed in 5.2 [makes them not build unnecessarily bridges over / on ground])
"tower": builds towers to reach targets over the ground, also to get over walls, needs to survive.
if nodes are missing when they are building, will they just skip that nodes and keep build on next part.

another thing that makes the bots not build is their crafting.
when they not have things they need, they will try to craft it, and or looking for it, and the stuff can be pretty much.
each item to find / craft is timelimit, (200s) then it will ignored if they dont find any, or they would keep looking for the items for ever.

bots will only build 1 house, then they will stay at home for ever.
they can go a bit from it, but walk back again or be teleported back.

you can customsize the build instrections for bots in their settings.
use aliveai:copy to create code, and past in their "home" setting.

bots with the building=0 will not build (suitable for monsters)
use aliveai:genbuildingtool to spawn houses, in same way as the bots is buildning.

they are 50% talking randomly, dephends on whats going on.

if their mood is possetive, and you clicks them will they go to you, like when you says <name> come
or if the mood is negative, they will just be annoyed, and after a few times attacking...

their mood changes depends on if they succeed or failed, find stuff, gets stuff, hurts..

the only corrently real answer you can get from a bot, is when you clicked / call them.

and yeah, it would be a lot more fun if we could communicate with them.
just that i have no idea how that would work.

5.1
you can toggle of team fighing in aliveai.team_fight in settings.lua or init.lua
they will still hunt animals for food and objects that hurted them
XaEnvironment Mods content repository

in the begining of this mod, i used a kind of node group system.
where it cuted down names to 1 letter.

like group:wood, default:wood. default:pine_wood... and any kind of wood would be w
same for stone (s)

this old system has started to mess up with the other functions and made it pretty complex, and did not work with the node placing anymore.

this means all bots / codes generated in by this mod, older then 5.3 will be void, if you just not replacing all s to stone and w to wood
XaEnvironment Mods content repository

How do you order these bots around, other than X-come
My modding team: https://github.com/basilea-rhomaion