If you are wondering why two recipes: because there are no trunks' slabs.
My repositories: Codeberg.org | My ContentDB's page | I'm on PureOS with XFCE

The latest commits are suppose to have corrected textures? Cause for me, textures are stretched.

lonestar wrote:The latest commits are suppose to have corrected textures? Cause for me, textures are stretched.
screenshot_20170819_182330.png

Are you using 16px textures? If so then there is a problem.
If not, you will have to use the non dev version that has custom textures included.
or make your own textures to suit your texture pack.

ahh, missed the 16px warning. Anyways, the texture pack I converted uses 128x128 images :( Not sure how to edit to make it work.

Edit:
Got my texture pack to work somewhat, only issue is the bottom part of the door, texture doesn't line up correctly, maybe this was an issue with original code, just not visible with smaller images?

Edit 2:
texture on back of door is fine, front bottom is off.

Lonestar, replace with this:

I tested it with VanessaE's 128px pack and
I don't get any mis-alignment in the textures;
it actually looks pretty seamless 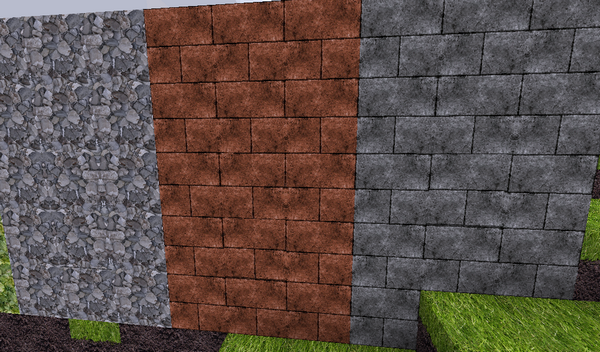 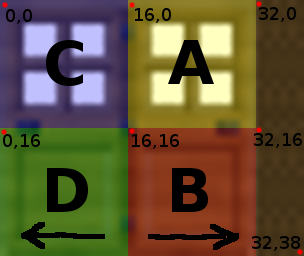 I've made this for reference, but I haven't solved the issue yet.
First of all, I would like to know if 0,0 actually is the upper left corner and if X is actually the width (from left to right) and if Y is the height (from top to bottom); being not certain of how the [combine texture modifier uses these coordinates is a royal pain.

Isn't clear about my doubt, thus I'm getting crazy trying to figure which .png goes where.

Anyway, about the picture size - 16px, 32px, etc. - I've thought to add an option to allow the user to select the preferred one, adding something like hidden_doors_res = 32 in the minetest.conf; this for compatibility with HD texture packs.

door_schematic.png
(55.67 KiB) Not downloaded yet

My repositories: Codeberg.org | My ContentDB's page | I'm on PureOS with XFCE

I had originally had way to many of the '[combines' arguments
I have been using this code below and everything seems to work okay,
but on larger textures the order of the arguments might matter...I am not sure.

the images are still reversed/mirrored
I am not sure you can fix that.
"Defects are always more tolerable than the changes necessary to correct them"

Hamlet wrote: I owe this guy a bottle of wine for his help! :D

Don't do this every time he helps you, he would get drunk xD
ＯＭＩＣＲＯＮ - pre-release 0.7 "Tweaky Update"

..and I also don't drink :)
"Defects are always more tolerable than the changes necessary to correct them"

Thanks, I was getting close by just guessing and entering dif numbers, seems that some of the modifiers weren't needed after all. And as far as textures being reversed, depending on the door, does not really show that much, would really have to look hard to see it.

How: using the ^[transformFX operator


--- Step 2
Issue: ^[transformFX doesn't produce the expected results when
used on the fly with the [combine operator.

How: applying it on a separate image to be used later

Idea: the mirrored image isn't actually created until it gets used, thus
no matter which approach I try: it will always lead to the same result
because it's like doing Step 2 over and over in different ways.

Idea: I will pretend it is a feature.

How: Telling people a story that justifies this oddity; e.g. hidden doors
have flipped textures because the mason worked secretly in the darkness,
misplacing the bricks; e.g. I have done it purposedly to help players find
some of these doors to reward their commitment while searching for them;
e.g. <put your story here>

Start working on the solution that allows users to choose their favorite resolution.
My repositories: Codeberg.org | My ContentDB's page | I'm on PureOS with XFCE

Yah! I got it to work
It corrects the mirror image problem,
but I don't know what kinda lag it's gonna cause :)

EDIT :removed 2 duplicate [combines in the "local new_texture" deal
Last edited by Napiophelios on Sun Aug 20, 2017 23:15, edited 1 time in total.
"Defects are always more tolerable than the changes necessary to correct them"

e.g. if you are using a 512px texture pack add this line to your minetest.conf:

Note: I've tested it on the default 16px textures, I do not use higher res packs; as usual, if you spot a bug let me know.

Very nice work, downloaded latest commits and works beautifully. The texture pack I'm using, I converted into into 4 different sizes, 16;32;64 and 128 to test and all work with latest commits.

Edit:
Not to much lag, I am running 36 mods in SP and just a little lag when first putting door and opening/closing a few time. But after that, no lag. Also, maybe add dirt door?

looks like your latest dev version is missing some nodes: brick and stone

Napiophelios wrote:looks like your latest dev version is missing some nodes: brick and stone

Yeah, seen that earlier, thought it was my texture pack, as it is still missing several images. I added missing pngs to texture pack and doors still had missing textures, so I just manually edited my init.lua.

Also, I added to my local mod a dirt door :D

Good lord, there are still a few reasonable people on this planet.
ＯＭＩＣＲＯＮ - pre-release 0.7 "Tweaky Update"

Good lord, there are still a few reasonable people on this planet.

I think minetest is his drug of choice :P

...
Last edited by Napiophelios on Fri Sep 08, 2017 00:51, edited 3 times in total.
"Defects are always more tolerable than the changes necessary to correct them"

This is a minor release:

It still has the old mirrored textures issue, I would suggest using Napiophelios' release while I bang things for the v1.5.1 ... it may take a while.
My repositories: Codeberg.org | My ContentDB's page | I'm on PureOS with XFCE

@Hamlet: I updated the download above with a crude version of your configurable dev branch.
It's crude but it works pretty good.

Is it possible to have the settings configurable by the main game menu like T.N.T. and fire mods?
Or are those coded into the game engine?

Man that would be cool for lots of different mods.
"Defects are always more tolerable than the changes necessary to correct them"

- This fixes the mirrored images issue as well as rendering correctly the inventory images, thanks to Napiophelios.

@Napiophelios I've been looking at how to implement client-side configuration, it will be added in the next Dev version.

I would like to thank those who have followed the development of this mod, this release should meet the quality expected from a mature mod and of course give you what it is aimed to add; so far it is supporting only the MTG nodes, but the roadmap does include support for other mods like Castles, Darkage and More Nodes.

And now, off to play with your dungeons, secret chambers and stuff. :)
My repositories: Codeberg.org | My ContentDB's page | I'm on PureOS with XFCE
Post Reply
89 posts