This is a stripped-down, simplified fork of signs_lib, which was then re-expanded to feature various street and highway signs.

There are three sizes of highway signs (2x1, 2x2, and 3x2 meters), in four color schemes, and your standard 2-up street intersection sign (left, and also available without the pole). The very small signs at the far right are standard signs_lib signs, and just shown here for scale.

Check your crafting guide to see the recipes, but in brief:

The intersection sign can be made from either a default metal sign, two steel ingots, and two green and one white dyes, or from a single green signs_lib sign and two steel ingots. The top-only part has the same recipe, minus one steel ingot. You can make the full-height one from a top part and a steel ingot, also.

Craft the 2x1 size highway sign from four dyes of the desired sign's main color, two dyes matching its edge color, and two default metal signs, then make the 2x2 and 3x2 sizes from two and three of those 2x1 signs, respectively.

You can also make them from two, four, or six green, blue, orange, or yellow signs_lib metal signs.

In addition to those is a whole bunch of signs of various sorts - stop, keep right, pedestrian crossing, various yellow and orange warning diamonds, and so on. Keeping to stuff that's useful in a Minetest world. Some stuff lets you add text (such as the generic warning signs, speed limit, US Route, and more), while other stuff is just static image signs (like stop, yield, do-not-enter, and so on).

All of the smaller signs are reasonably MUTCD 2009 v2 compliant, as much so as is practical in a voxel world.

Since this is forked from signs_lib, some signs use the same 15 px font as a regular sign therein, but at a different scale. Others use the 31 pixel font that was once included with signs_lib (for its high-rez option).

Here's the full library of signs as of 2018-10-03 (note that things like speed limit signs are editable -- if a sign looks hard-coded, it's probably just a generic image): 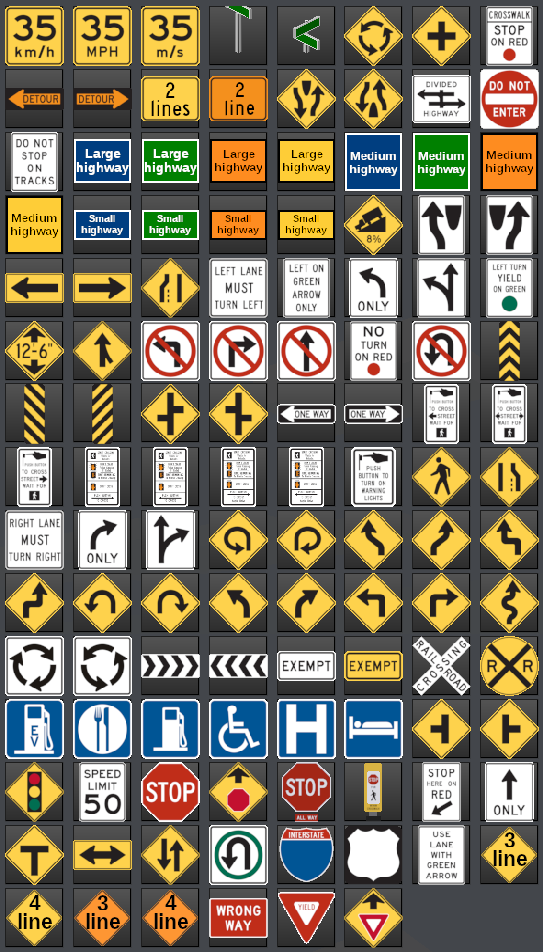 Added some new signs.
You might like some of my stuff: Plantlife ~ More Trees ~ Home Decor ~ Pipeworks ~ HDX Textures (64-512px)

Update: added a few more signs, and fixed a major derp: other than the basic intersection sign, everything should have been wallmounted. Well, that's all fixed now.

Use the screwdriver to clean up anything that's wrongly rotated as a result of the fix, the text will update as it rotates.

I just tried out this mod, and I'm very happy to see an intersection sign. Writable road signs like these are something I've wanted for a while, and no other signs mod is good enough for street signs. Thanks for making this! (This makes two mods you made in a row that I'm really excited about -- led_marquee, and now this!)
My Mods: Bridger - Slats - Stained Glass

A bunch more new signs added today. Most of them are as close to/compliant with MUTCD 2009 as seemed reasonable within the limits of a voxel world.

* If you have the "infrastructure" mod as found in cheapie's roads modpack, or in some forks of webdesigner97's streets modpack, my mod will convert its stop, yield, and pedestrian crossing signs to its own versions via an LBM and some aliases. Since it's an LBM, the change is permanent, or at least as permanent as anything else in a Minetest world (one could write a complementary LBM to convert them back, if desired).

* When placed against streets mod's signal/streetlight "bigpole" or most kinds of fenceposts, most of the smaller signs will switch to pushed-back models with straps on the back, to make the sign look like it's lashed to the pole/fence. The "object marker" signs don't do this, because they're just too small for it to look good, in my opinion.
You might like some of my stuff: Plantlife ~ More Trees ~ Home Decor ~ Pipeworks ~ HDX Textures (64-512px)

Lots of updates over the past several days. In brief, I've added a whole lot of new signs, and made improvements to the "highway" signs, as well (they now hold a lot more text, among other things). Check the commit log for details.
You might like some of my stuff: Plantlife ~ More Trees ~ Home Decor ~ Pipeworks ~ HDX Textures (64-512px)

This is a great mod. I love the variety of signs.

One question: I almost never work in creative mode. Unless I'm missing them in the code, I don't see crafting recipes for signs other than the generic large signs. Is it possible to either have some sort of crafting recipes or (since there are a lot of signs, which would require a lot of recipes, making conflicts difficult to avoid, etc.) perhaps some sort of support for the kind of sign-making machine in the Streets mod or something?

A sign-making machine is needed, you're right. If someone wants to make one I'd appreciate a pull request.
You might like some of my stuff: Plantlife ~ More Trees ~ Home Decor ~ Pipeworks ~ HDX Textures (64-512px)

Important update: this mod's signs API has been moved into signs_lib and expanded upon there. Therefore, this mod now depends on it and on my basic_signs mod (you can find it at https://gitlab.com/VanessaE/basic_signs). You must update your copy of signs_lib to commit 4ff54c9a or later, otherwise you will get crashes.
You might like some of my stuff: Plantlife ~ More Trees ~ Home Decor ~ Pipeworks ~ HDX Textures (64-512px)

Can you add crafting instructions to unified_inventory please? (Or do I have to file a bug on unified_inventory Github for that?)
-redblade7, admin of: THE CREATIVE GARDENS (creative), THE VALLEYS (sandbox), and THE DIGITAL FARMS (farming/hunger/shops)

There are no recipes for most of them yet. I figure I'll make a "machine" for that purpose... eventually.
You might like some of my stuff: Plantlife ~ More Trees ~ Home Decor ~ Pipeworks ~ HDX Textures (64-512px)
Post Reply
12 posts • Page 1 of 1