A building tool for MineTest which places multiple blocks based on the current mode of its marker's symmetry settings.

Description & caveats:
It is designed to speed up building structures which have mirror symmetry in one, two or all three dimensions. It does this by mirroring nodes placed or dug with the tool in the X, Y & Z directions across a 'virtual mirror' which is marked by the tool placed 'in world'.

It can be used in creative mode, or in survival. For survival mode it soft depends on default for its crafting recipe:

In survival mode, the materials the tool tries to use for building must be available in your main inventory somewhere.[/b]

It has only been tested on desktop but only uses the left/right mouse buttons, so should work fine on phones/tablets. In this case I believe "double tap"="right click" (how you place stuff) and "long tap"="left click" (how you dig stuff), although this is entirely untested ;-)

Testing has shown that protection mods are respected, the mod ***should*** be safe to use on multiplayer servers.

Basics:
Place the symmetry tool as you would any normal block. This creates the marker which will act as the mirror across which nodes will be mirrored.

At this stage (or any time the tool is not 'loaded' (see below)) the controls do the following: From now on, until the tool is unloaded: Protection is respected for each individual node placement or removal, so the tool should be safe for multiplayer use. 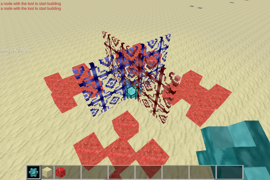 Dependencies:
It soft depends on minetest_game's default, but ONLY to provide the crafting recipe and to check for survival mode. It should operate without issue on any creative server.

Or as a good old fashioned zip file:

Ok, Here is a really quick and simple example video showing the Symmetool in use, making a small building which is symmetrical accross the X & Z axes. (link goes to my new youtube minetest channel)

It is also live on our server "A D V E N T U R E T I M E" which needs a password to enter.
Look the server up on the serverlist & read the information to get the password.
My Published Mods: Visual Bots | Symmetool Mirror

I got fed up repeating myself on castle & tower builds...
My Published Mods: Visual Bots | Symmetool Mirror

this is truly a really, really, good tool, thanks for sharing!
UFO for the UFOs MOD Melkars Better mice WIP Minetest logo 3D Helicopter for the Simple Helicopter MOD

Thanks guys, and you're welcome. The praise & thanks means a lot coming from such talented modders ;-)

Several of my previous servers would not have been the same without your smart mods...
My Published Mods: Visual Bots | Symmetool Mirror

This is pretty cool. Do you plan to make it consume nodes and have a craft recipe so it can be used in creative?
Core Developer | Donate | My Twitter | Mods | Mods 4 Android | Minetest Modding Book

Mmmm... very interesting. Great work!!
If you want realism, you're in the wrong place. Get off your mobile.

rubenwardy wrote:This is pretty cool. Do you plan to make it consume nodes and have a craft recipe so it can be used in creative?

@rubenwardy: thanks. I did not have plans to add survival mode, but have now done so.

@CalebJ: Thanks a lot for the kind words...

The mod should now work in Survival or Creative mode.
see the1st post for github link, or grab it from ContentDB.

I am now not aware of any outstanding bugs in the mod, so please, if you find any problems with the code, go here to report them.

If you have any suggestions, comments or feature requests, feel free to post them here.

As a simplification, would it be possible to have a placement of the symmetry node as the only requirement for mirroring? What I mean is that, technically, if a node is placed within a radius of the center symmetry node then it is automatically mirrored in the directions , without the need to also wield it at all. Modes can be toggled on the center node directly.
Mods | Support Mesehub: bc1qluuests9rxmlnvpjrhsnyjg9ucwy6z3r0y3srw

Thanks for this useful idea!!! Amazing!!! And also for your videotutorial.... many mods would need these videos to illustrate their use!

@codesound: thanks for the complementary remarks.As to the video, I was just worried people wouldn't understand what on earth this mod was for from my bad descriptions ;-)

@texmex: possible? yes of course... anything is possible ;-) However I'm unlikely to go that way unless someone gives me a brilliant & efficient method to do so...

All the ways I could think of doing it without a handler tool ended up way too inefficient, as I would basically have to watch the on_place of EVERY node (messy) or use a global callback or timer to keep an eye on the whole area for new blocks (inefficient).

Hence we have the placer tool (which was inspired by the build helpers on the fantastic 'Inside the Box' server by Nore and Sofar).

I am of course open to any ideas anyone may have as to how it could be done, as it would be nice, and simpler. You are of course welcome to try to get it to work yourself ;o)
Last edited by Nigel on Tue Nov 26, 2019 20:15, edited 1 time in total.
My Published Mods: Visual Bots | Symmetool Mirror

Nigel wrote: All the ways I could think of doing it without a handler tool ended up way too inefficient, as I would basically have to watch the on_place of EVERY node (messy) or use a global callback or timer to keep an eye on the whole area for new blocks (inefficient).

Why is it recommended against? It’s a good method imo.
Mods | Support Mesehub: bc1qluuests9rxmlnvpjrhsnyjg9ucwy6z3r0y3srw

It's better to use register_on_placenode if you want to be alerted to the placement of any node. The bigger problem is finding whether the node is placed in a symmetric region, but I'd avoid premature optimisation and just do a simple node search to begin with
Core Developer | Donate | My Twitter | Mods | Mods 4 Android | Minetest Modding Book

How about storing the position of symmetry nodes is mod storage as soon as they’re placed? By doing so the first step in the added register_on_placenode logic would cost near nothing (checking for the existance of any placed symmetry node at all). If there’s a known node’s pos stored, then check whether the newly placed normal node is in range of a symmetry node. If so, mirror it.

texmex wrote:How about storing the position of symmetry nodes is mod storage as soon as they’re placed?

On large servers, this could cause a large linear search. And it's a pain to keep updated. It's worth doing something simple and using the profiler to check the mod's performance impact.

get_node is slow mostly because of the time it takes to go between C++ and Lua. Using a single function like get_node_near or get_node_in_area will not have this issue
Core Developer | Donate | My Twitter | Mods | Mods 4 Android | Minetest Modding Book

@BuckarooBanzay:
indeed, it's the perfect use case, but as rubenwardy notes, on a server even an N style problem gets slow, fast. But you know that and I'm sure there was a /s missing from your comment ;-) Oh no, wait, nothing was missing ;-)

@rubenwardy & @texmex
Indeed, I had considered most of these points, but BOY, thanks for the input. I was gonna have a limited set of 'symmetricable' nodes in a lookup table or tree, but thought better of it in the end, and decided the open endedness and speed (excepting my poor quality code) of the tool based solution was the best bet.. especially considering the HUGE number of registered nodes on my current live server, I didn't want to slow down building operations in general for a specific use tool.

As an aside, we just had several players building with it simultaneously on ADVENTURETIME with no issue at all, and my VPS is rather under-powered right now due to lack of funds...

@rubenwardy:
I get the hint, and I agree, the code needs much optimization at this point, It was a proof of concept. I can reduce MANY of the expensive calls or remove them altogether. Thanks for the input, your code and your explanations in the modding book has been a big part how I could make this mod in the first place ;-)
My Published Mods: Visual Bots | Symmetool Mirror
Post Reply
21 posts • Page 1 of 1