by Hybrid Dog
This mod adds swamps to minetest.
By default they're fairly rare, you can change it in the settings file.
https://github.com/HybridDog/sumpf/blob ... ttings.lua 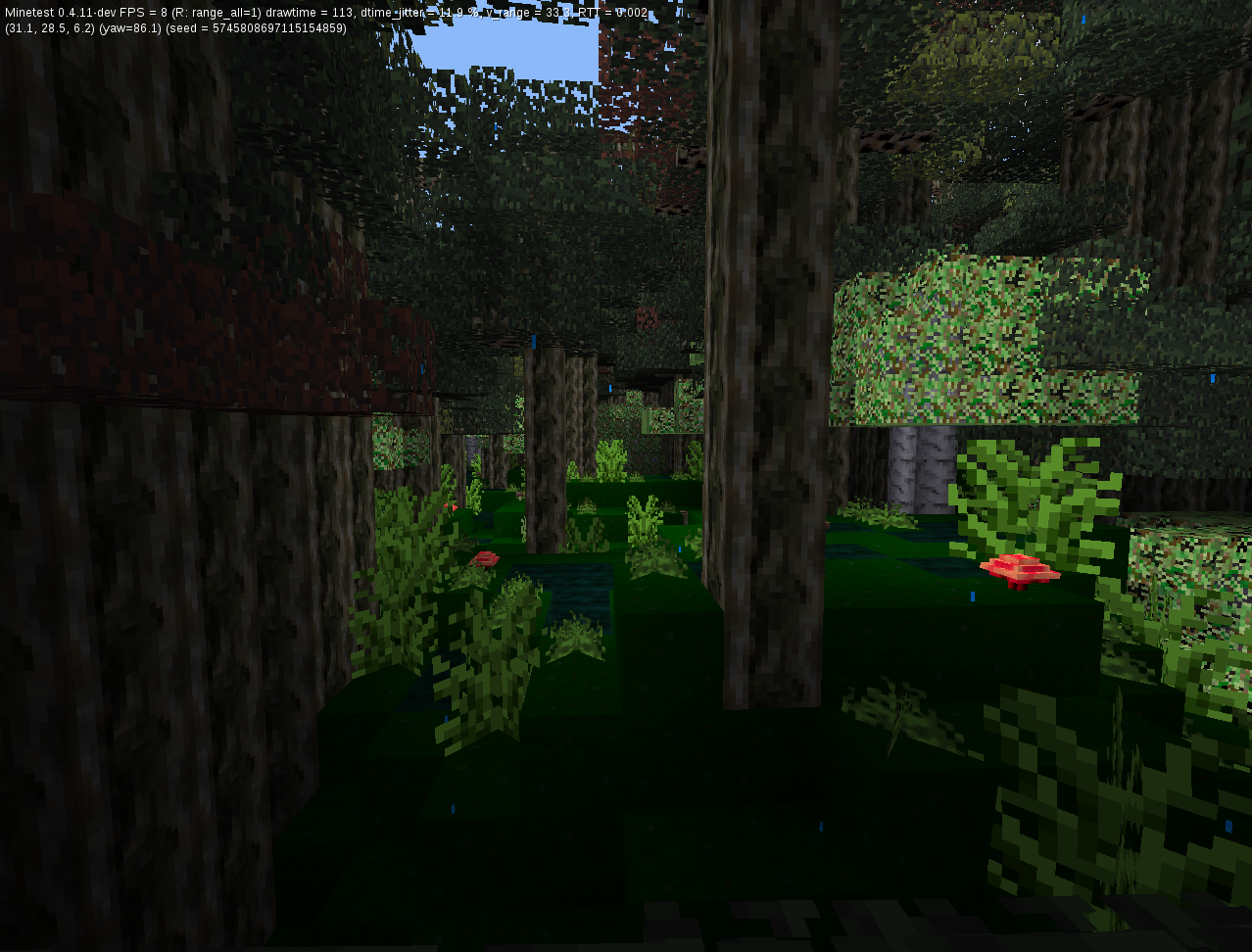 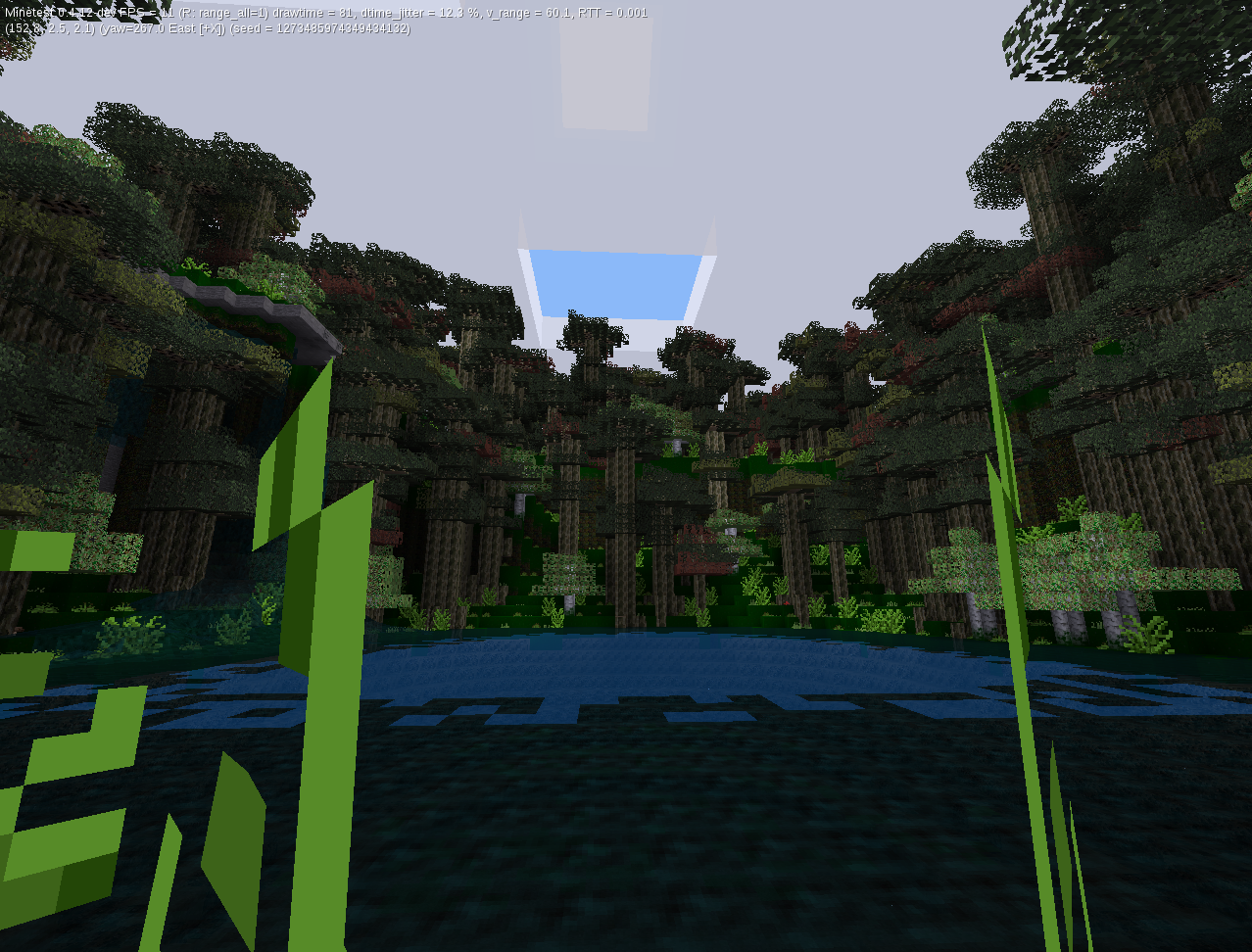 swamps are compatible with plantlife and ethereal, see plantlife, ethereal

Textures made with gimp. (by a chimp, me)
If you got ideas or found bugs, please tell them to me.

How to install a mod?
by Sokomine
I've found two more swamps in my singleplayer-game :-) They look great! Only problem is that the computer got really slow. But that might be due to mapgen and too many mods. Another point I noticed: Plants in a swamp sometimes spawn on other plants, e.g. mushrooms on tall grass, or jungletree-samplings on top of other plants and vice versa.
by Inocudom
I am glad to see that this mod has returned. I hope it will continue to be worked on and improved.
by Inocudom
It seems that the lag caused by this mod may not be caused by it, but by the jungletree and habitat mods. The creator of those two mods may consider using L-System to generate his jungle trees in the future, and he did say that he needed to give the areas created by his habitat mod smoother edges.

The birch trees look very nice and they really do contribute to the look of the swamps. Same thing goes for the swamp grass, the little mushrooms, the mud, and the stone beneath the swamps.

Are there any plans to use L-System's tree generation for the birch trees in the future, even though they already have parts that look like branches?

I found a topic that might help you out. The link to it is below.
http://minetest.net/forum/viewtopic.php?id=3984
by chase programer
Hey can you give this to me for my hungergames map
by Bas080
Hybrid Dog, i will be updating the habitat mod. You can look at the new code at https://github.com/bas080/habitat/tree/development. The readme and commits provide easy instructions on how to make it work. Comes down to

EDIT:
I will be pushing the changes as soon as you updated your mod.
also
Feel free to add the jungletrees mod to your mod. jungletree.lua and dofile in the init. one depency less

https://github.com/bas080/jungletree/tree/development
by pandaro
if you can add the quicksand
by Jalo
Theres a mob missing, yeah that, right a Alligator! just think on that coming, get you when mining Some ore.
by Rancon

Hybrid Dog wrote:This mod adds swamps to minetest.
If you have got some ideas, tell them to me.

Textures (edited with gimp) from gamiano.de.

Click here for a screenshot of the previous jungle.

umm.... suddenly all the swamp grass had orange and yellow bits, how can i fix it
by Rancon

Rancon wrote: umm.... suddenly all the swamp grass had orange and yellow bits, how can i fix it

Thanks! What do the swamp coordinates mean?
by Inocudom
The jungle trees and birches of the moretrees mod would look pretty nice in this type of biome. For variety's sake, the current trees could still be used as well. Your mushrooms would look good in the swamp water.
by Sokomine
It would be great if this mod could work well alongside moretrees and be faster. The swamps as such are great and I'd love to introduce them back to my singleplayer world - a world that has moretrees, plantlife_master, animals and snow for environment (plus a few other mods).
by Sokomine
Mapgen has improved considerably with the new version. Is there no way to make the swamp work fast enough?

In my experience, ore generation sometimes took a considerable amount of time. That went way faster with the new way of creating them in C++. Your swamps mod creates special coal and iron. Placing plants is fast enough with plantlife (I'm sure spawning them can be limited to special swamp-nodes), and the snow binome manages to run fast enough, so there ought to be ways.

Perhaps it would be sufficient to replace all nodes of one type in a certain region with the new swamp nodes? For a start, using the new mapgen functions for ores plus plantlife for plants might be worth a try.
by Inocudom

Hybrid Dog wrote:New version:
— ca. 10 times faster
— disable the not working swampwater
— add the old jungletrees (by Bas080)
— readd the ores (but with the old mapgen)
— find the ground much faster (thanks to the code of VanessaE)

If you keep working on this, it might end up as part of the base game one day (nodes and all.) Swamps are pretty and have special terrain, so it makes sense for the jungle trees in them to be larger.
by Sokomine
When I last tested, the water appeared mostly not as lakes, but as 1x1 holes that led down to ground level. It looked really stange. Is this the same bug?
by Zeg9
/me finally tried this mod

HybridDog, did you make the "footstep" sound ?
by Zeg9

HybridDog, did you make the "footstep" sound ?

No, I got them from supertux.
I hope I haven't lost this information in my init.lua.

Oh, I recognize them now ! Ice block, and mr. tree :-)
by 12Me21
Can you make the textures 16x16?
by Sokomine
Oh, a new version? Fine! What did you change? *downloading*
by jojoa1997
Maybe you should only have swamps around jungletrees of the mapgen?
by Inocudom
You could make a swamp cobble node along with the swamp brick node and use those to make dungeons that end up in swamps more fitting to the surroundings (though you would probably have to make swamp brick stairs and swamp cobble stairs too.)

I tested swamp water with the finite_liquid setting on and it works fine. An idea for the future could be a way for flowing swamp water and flowing normal water that are next to each other to flow into each other (the water values of the two types of water nodes could be compared, and the node with the winning water value could be what the combined water node could end up looking like.)

Your swamps, just like the trees of moretrees, make the overworld a much more diverse and much prettier place.
by Mossmanikin
Like this mod a lot.

by Mossmanikin
I was surprised (in a positive sense) when I found out that it works quite well on an Minetest version as early as 0.4.1.
Since I like to play older versions of the game once in a while.
by PilzAdam

Mossmanikin wrote:I was surprised (in a positive sense) when I found out that it works quite well on an Minetest version as early as 0.4.1.
Since I like to play older versions of the game once in a while.

Mossmanikin wrote:I was surprised (in a positive sense) when I found out that it works quite well on an Minetest version as early as 0.4.1.
Since I like to play older versions of the game once in a while.

I have to admit you're right, maybe that's why I (without thinking about it) used the word "older" and not "old".