Significant update: bas080 has rewritten his vines mod and submitted it to plantlife. Said rewrite, which seems to perform better, has been merged in. :-)
You might like some of my stuff: Plantlife ~ More Trees ~ Home Decor ~ Pipeworks ~ HDX Textures (64-512px)

Scheiker wrote:Maybe it is just me, but can anyone confirm that the bushes from bushes_classic are being generated? I can't seem to find them unless I spawn them myself.

Nvm, I don't know what it was but after doing a rebuild of my GNU/LInux installation I can now see the bushes in places where I know I had looked before. Could of been a bad lua version or something, but at least it works now :)

Bushes don't take part of mapgen. They are generated after, in an ABM (Active Block Modifier). So it's normal that you can't see any bush at first. But if you play a long time on the same place, you will see the bushes appearing slowly.
Just realize how bored we would be if the world was perfect.

A new function was just added to Minetest master branch to condense the sort of surface-under-air search that my mod does into a single API call, which plants_lib now uses if available. If it's not available, the old search loop will be used (e.g. on 0.4.12 stable and older). So, speed improvements thanks to engine improvements. :-)

Also on the other side of the coin, I've added an on-shutdown hook to force plants_lib to play-out the rest of its mapgen log at shutdown. If you were busy spanking the mapgen, expect a few tens of seconds extra for the game to exit. This is to prevent those latent mapblocks from ending up unpopulated. If the mapgen was idle at the time of shutdown, then the log will be empty and of course nothing of consequence happens - this will be the usual state for most people I guess.

This latter change has no effect on normal gameplay -- only on the amount of time it takes a server to shut down.
You might like some of my stuff: Plantlife ~ More Trees ~ Home Decor ~ Pipeworks ~ HDX Textures (64-512px)

Another small update: Instead of running at a max speed of one mapblock populate event per server step (usually 0.1 seconds), plants_lib will now try to play back as many such events as it can per step. It'll only start such a sequence if the server's step interval is less than 0.2 seconds (twice the usual time), and will only run that sequence for up 0.2 more seconds before releasing control back to the server.

This will result in less time spent populating the map, but shouldn't cause a significant increase in lag. Total increase in throughput depends on the speed of the machine and how much time the mod already took in each server step interval - a slower machine won't see a change, a fast machine might see a 3 or 4x increase. On my box, about twice as many events are played out per step as before, so around 2x.

Doesn't mean the code is any faster (maybe insignificantly so), it just uses a lot more CPU than before, and gets the job done in correspondingly less time. ;-)

EDIT: if you got the above update, get this morning's fix. I fixed a brain-o that caused the code to just spin at 100% CPU for no reason.

EDIT: fixed another glitch in the new code. If the map seemed to "pop into view" mostly-populated before, it won't now, because it was basically monopolizing the CPU. Now it works like it was supposed to in the first place. The above 2x/3x/4x commentary still applies.
You might like some of my stuff: Plantlife ~ More Trees ~ Home Decor ~ Pipeworks ~ HDX Textures (64-512px)

The new baskets are fine, but...they kind of broke one of my houses :-)

A floor out of baskets did work well in the past. The baskets had a greyish upper part. Now...it does look slightly...odd :) 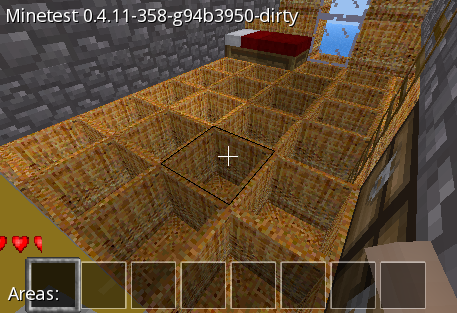 The entire house as such does not look too bad, even with the new baskets: 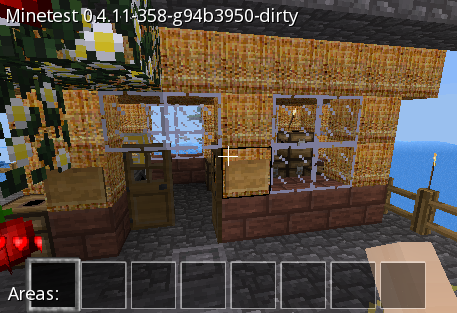 Sucks to be you for building something out of baskets ;-)

Facedir added in git, so the floor nodes can be flipped over with the screwdriver to show a flat side.
You might like some of my stuff: Plantlife ~ More Trees ~ Home Decor ~ Pipeworks ~ HDX Textures (64-512px)

VanessaE wrote: Sucks to be you for building something out of baskets ;-)

They proved to be decorative and stable enough :) It's just with the changes that i started to stumble on that upper floor! Imagine having to walk on such a floor...

Thanks for the facedir update :-)
A list of my mods can be found here.

Update : there is now sunflowers (made by kaeza) in Plantlife. They're sparingly spread over the lands.

Nice sunflowers! I hope to encounter some in the game eventually.
A list of my mods can be found here.

Regarding the sunflowers, you'll definitely run into some - I think I need to turn the spreading parameters down, as they seem to be too prolific.
You might like some of my stuff: Plantlife ~ More Trees ~ Home Decor ~ Pipeworks ~ HDX Textures (64-512px)

Eating a healthy brown mushroom potion heals me for only half a heart. Nevermind, it increased half a hunger, I was at full hp, so I need to see what it does when I am dmged. Ignore this.

Hi, VanessaE. Plantlife and More Trees are awesome! :) Really immersive compared to just seeing the default trees. However, I have one problem: I can't craft slabs and stairs (and possibly other objects that need wood) from your trees. I can create planks and sticks perfectly well.

I don't know if this has already been addressed before, but I tried searching the thread for 'slab' and 'stair' and found no results. Anyway, thanks. :)

Caerulean wrote:I can't craft slabs and stairs […] from your trees.

But, anyway : have you installed More Blocks ? This mod is used by moretrees to create stairs and many other blocks (29 differents stairs for each wood !).

I agree, definitely ! :)
Just realize how bored we would be if the world was perfect.

Moretrees' slabs/stairs/etc are only available by using the saw in Moreblocks/stairsplus.
You might like some of my stuff: Plantlife ~ More Trees ~ Home Decor ~ Pipeworks ~ HDX Textures (64-512px)

Oh, thanks! I was trying to avoid More Blocks because I wanted to keep my game simple but it seems I do not have a choice. xD :)

Caerulean wrote:Oh, thanks! I was trying to avoid More Blocks because I wanted to keep my game simple but it seems I do not have a choice. xD :)

nooooo do not avoid more-blocks. It's so common on servers, together with more-ores, it is almost a default addition.

Rather let's make more- blocks part of the the default Minetest-Game. ;-P

New problem. Sorry if I am ignorantly bothering people and perhaps I shouldn't be posting this in this thread, but my sister and I can't seem to play together without lagging caused by Plantlife and/or More Trees. We can play separately with no such problems, even with nearly all graphic enhancers and shaders on, so I am assuming that it's the server that's having problems loading and processing all the stuff in. Any tips, solutions, or workarounds? Thanks. :)

If you're using the latest plantlife from the git repository (not the version in the mod store nor the version debian has), it should not cause a significant amount of lag. A few seconds from time to time as new terrain starts to generate, at worst.
You might like some of my stuff: Plantlife ~ More Trees ~ Home Decor ~ Pipeworks ~ HDX Textures (64-512px)

I believe I downloaded the mod from this link - https://github.com/VanessaE/plantlife_m ... master.zip - which is found in the top post of this thread.

Update: The "trunks" component in this modpack has been updated to rely on default pine tree nodes instead of the ones moretrees used to supply. As a result, it now requires a very recent copy of minetest_game, and if you have Moretrees, you'll need to update that as well.
You might like some of my stuff: Plantlife ~ More Trees ~ Home Decor ~ Pipeworks ~ HDX Textures (64-512px)

I have split the plants_lib mod off into its own repository, and have finally renamed it to "biome_lib". As a result, all functions therein are in the "biome_lib" namespace instead of "plantslib". An alias (with a deprecation warning) is provided for backward compatibility.

The mushrooms component from this modpack is now mostly obsolete, and has been rewritten and renamed as a "3d-ify" mod for the mushrooms now contained in minetest_game.

This modpack, or at least that specific component, now requires an up-to-date copy of minetest_game (particularly the default and flowers parts) from commit 408ee69f or later, and a new enough Minetest engine to run it. When 0.4.13 comes out, that will work fine too.
You might like some of my stuff: Plantlife ~ More Trees ~ Home Decor ~ Pipeworks ~ HDX Textures (64-512px)
Post Reply
301 posts