The regular saplings for those three trees will grow randomly into either their default models as seen in a basic Minetest install with jungles enabled, or their Moretrees counterparts (at least, they should!). Note that the "_ongen" saplings always grow into the Moretrees versions of these trees.

Plantlife modpack also required a small update in its trunks and woodsoils components to account for this change.

Another update: finally made birch, spruce, fir, and the Moretrees versions of jungle trees work again! Also, changed the biome def for those jungle trees to use the same settings as plantlife's giant ferns.
You might like some of my stuff: Plantlife ~ More Trees ~ Home Decor ~ Pipeworks ~ HDX Textures (64-512px)

This mod now uses the engine/game's default leaf decay code for all of its leaves.

In the process, I turned the radius for palm leaves down to 10 (from 15). If you have a moretrees_settings.txt in your world folder, delete it. It will not be recreated, so if you have a custom setting you want to keep, copy and paste as needed.
You might like some of my stuff: Plantlife ~ More Trees ~ Home Decor ~ Pipeworks ~ HDX Textures (64-512px)

Is there a way to add a craft item to the rubber trees. That besides extracting Latex off the trees or grinding the trunk them extract the grindings to get the latex. Can you cook the Leaves and get the latex.

I've tried dreambuilder on minetest-0.4.13-this-friday-git and right away I got shadow under more trees bug :), also, what is funny, there is snow biome (tundra or taiga, don't know) and it contacts with water with tiny strip of sand... on which palm trees grow (suddenly!) :) minetest_game was 1 or 2 days old.

Check that you planted it at the right elevation, otherwise it will not grow:
https://raw.githubusercontent.com/Vanes ... biomes.txt

Two really annoying things about this mod:
1. Planting and growing trees is impossible if you built out of elevation.
2. If you want saplings, better plan a day or two of mining leaves.

I have a feeling that it is the temperature doing it. Is there a way to disable i or see what temp is around you.

How do i disable the cold for mapgen

JoshMars wrote:Two really annoying things about this mod:
1. Planting and growing trees is impossible if you built out of elevation.
2. If you want saplings, better plan a day or two of mining leaves.

So i started a new world and found a place that did not have any ice or snow. So i found about 6 rubber trees near by where i put my home base, but i put down some dirt then planted some rubber trees but there not growing. I have a picture of it below.

more trees is completely unusable now. I use the latest versions of minetest, v7 mapgen, moretrees, moreblocks and biome_lib and it never was that worse. No other mods used for this screenshot 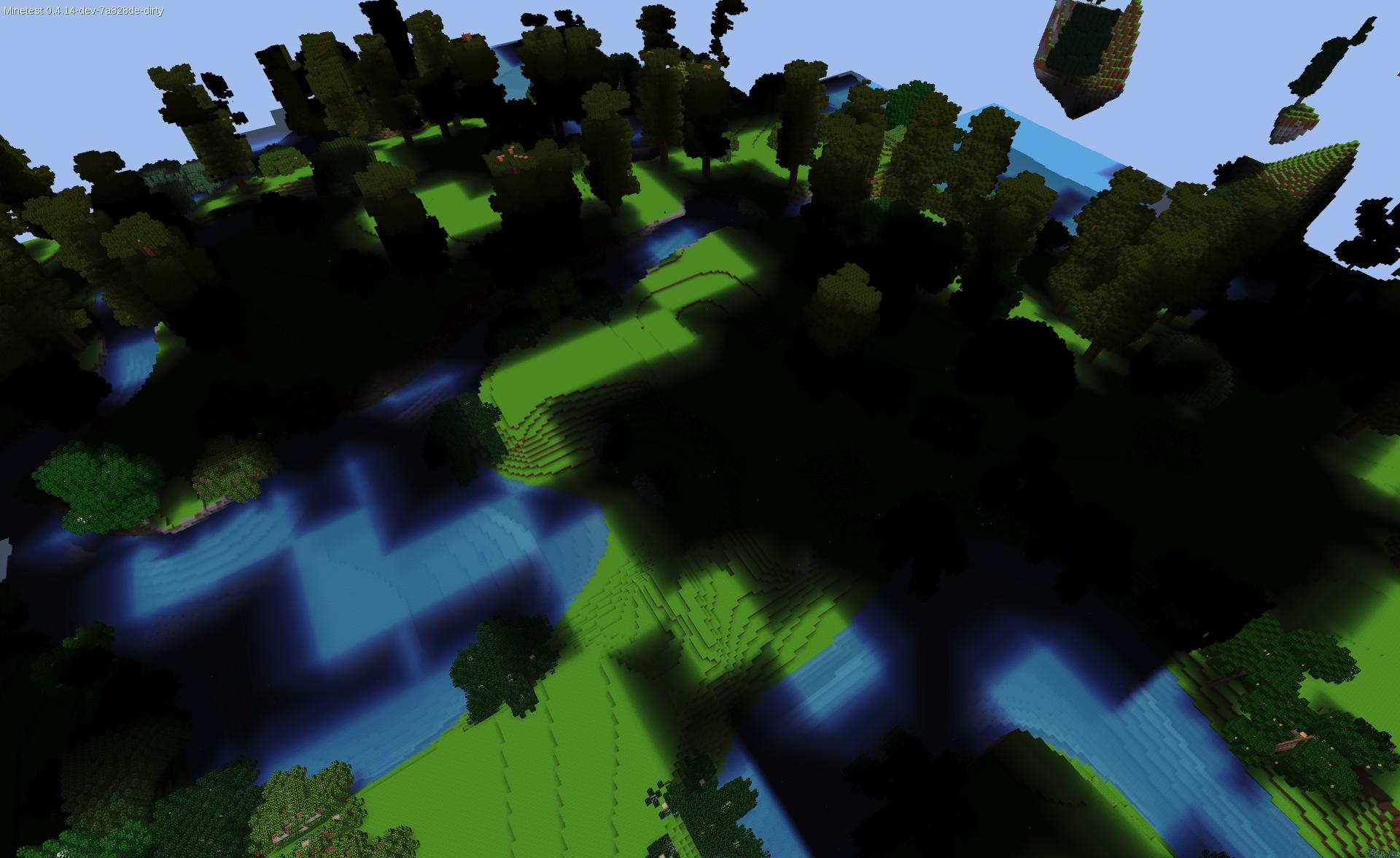 This is a known engine problem, happens with mapgen v7 and most others except for v6.

It is not a Moretrees bug.
You might like some of my stuff: Plantlife ~ More Trees ~ Home Decor ~ Pipeworks ~ HDX Textures (64-512px)

Not a mod bug, l-system currently causes lighting bugs, subtle in mgv6, extreme in all other mapgens.
L-system may have been merged because no-one noticed the subtle shadows in water during testing, or changes to lighting code over the years created the subtle bugs later.
Then the new mapgens came along with 1 up 1 down overgeneration which makes the bug more extreme.

If you can cope with subtle shadows in water use the moretrees option to place trees as saplings, in all non-mgv6 mapgens.

Vanessa, could you just make growing them via saplings by default to avoid these questions until bug is fixed in engine? People are using it on server with those broken shadows all over it and don't even know about this method.
Last edited by Fixer on Mon May 23, 2016 18:53, edited 1 time in total.

At one time, that was the default setting, and I am not about to change it back to just to accommodate an engine glitch. :-P

Look in your world directory for a file named "moretrees_settings.txt" (if it doesn't already exist, create it), and add this to it:

At one time, that was the default setting, and I am not about to change it back to just to accommodate an engine glitch. :-P

First page actually says it is planted as saplings by default, my point is people (including admins) rarely read README.TXT or whatever and just enable it in mods and rage how minetest so itty and mods unstable, bug on bug la-la-la, better generate them as saplings, you will wait for bugfix of shadow for years probably :}
Last edited by Fixer on Mon May 23, 2016 18:54, edited 1 time in total.

It gives a /mapfix command that fixes shadows (and fluids) around the player issuing it.

Mapfix is not a solution if you have to type /mapfix every minute. Maybe it can be called in the background every 10 seconds, but it is still... crap

I tryed the sapling option. Better than nothing. But it is scary if a Sequoia grows right in front of you and you see nothing and it is dark :-D

I really hope that this bug will be fixed soon. It's annoying
List of my mods

Whats wrong with planting saplings instead? :/ Abm should not be that heavy. Also, add red text with warning about shadow issue.
Last edited by Fixer on Mon May 23, 2016 18:54, edited 1 time in total.

The word is "sapling" :P anyway it's because I simply prefer to have the mod spawn the trees already grown.
You might like some of my stuff: Plantlife ~ More Trees ~ Home Decor ~ Pipeworks ~ HDX Textures (64-512px)

I wonder if it is possible to enable instant spawning on mgv6 and sapling-like spawning on other mapgens automatically?

I think that's possible but I've never looked into it, since it's so trivial to change the setting.
You might like some of my stuff: Plantlife ~ More Trees ~ Home Decor ~ Pipeworks ~ HDX Textures (64-512px)

Have you ever considered adding maple? They are quite popular here in the states.
Post Reply
406 posts