Want to have a windmill in Minetest? One with sails that really look like a windmill and which rotate? That's what this mod is good for. Nodes with signlike and plantlike as drawtype support visual_scale. That allows for animated images to be shown at larger scale. This is especially useful for windmills, watermills (to a degree!), large tv screens etc.

There are many windmill types available: 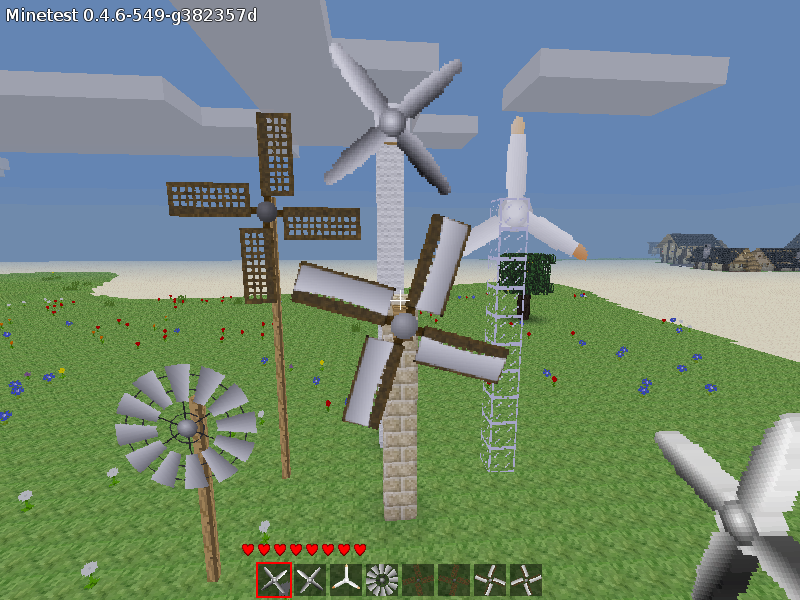 Sample windmill - the wings/rotor blades are animated and rotate:

The same animation acting as a watermill: 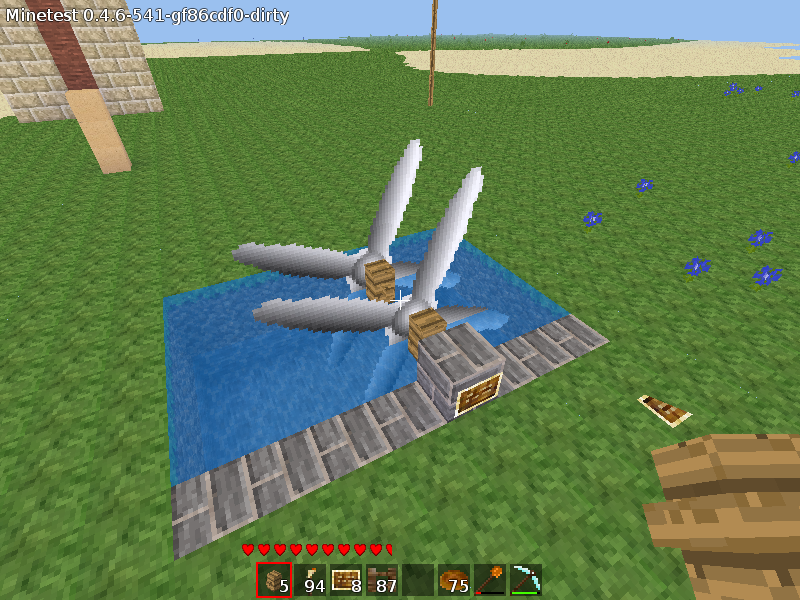 If you want it to rotate counter-clockwise, just craft the sails alone:

There may not always be enough wind, and you may wish your sails to be idle:

There's also a 4-blade-version of the modern blades available:

Farms sometimes seem to be equipped with these:

If the normal classic sails are too small for your mill, consider these:

The 4-blade-version is also available in a large version:

This may be helpful for making a visual connection between rotor and rest of the structure:

Added a larger version of the historic windmill and the idle one. The windmill sails are 20 nodes in diameter, and the media files are larger. It's nothing for servers but may enrich your singleplayer world.

The animated textures have all been done by VanessaE.

Will you be able to power things with mechanical axial?
by VanessaE
In theory one could make it do that, with the right kind of code, but as of now it's decorative. The intent is to hopefully use this or something substantially similar, for the Technic wind turbine.
by Jordach
http://mg.viewskew.com/u/jordach/m/windmill-prototype/

^ Prototype model.. Now if only we could have meshes as nodes...
by Sokomine
We have now more windmill types. Enjoy!
by Josh
Cool! Maybe they could power other things like Mesecon structures.
by Sokomine
The mesecon structures usually are very low-power. Even the watermill is to my knowledge only a sensor (water flowing/not flowing). I hope they can be used in technic eventually. That already has windmills in the new version. They're a great source of MV energy and can run a variety of machines.
by Sokomine
Update: Added a version that contains a historic windmill and an idle one which are about 20 nodes in diameter. Due to the large textures that requires, using the windmill_large mod on a server is not recommended (download of the media data would take too long). It is intended for your singleplayer world where you can enjoy larger windmill sails with this. windmill_large depends on windmill.
by Sokomine
Update: Added two more windmills in large versions - namely the more modern 3- and 4-blade-windmills. They're larger now. Unfortionately, that also increases download size. So best use this only in singleplayer! The new windmills are in the windmill_large mod.
by Forgelander
I play minetest with this,

I like this mod but there he has a chance to produce energy with?

balthazariv wrote: I like this mod but there he has a chance to produce energy with?

Not really. This mod's just for the decorative part of rotating windmill sails. If you want energy, you also need something that consumes the energy. Many players combine the windmill from technic with the animated textures from this mod, as the windmill from technic has very tiny sails/arms. With technic, you get grinders, furnaces powered by electricity, a tool repair workshop, a cnc machine, and a lot of fun.

Updated. Thanks for reporting it!

by Sokomine
Re-added the missing pictures. If mediacrush.sh wents down now...not my fault :-/ Hope at least this third service of its kind will survive long enough.

by mahmutelmas06
Do you have a plan to add windmill to mg_villages ?

mahmutelmas06 wrote: Do you have a plan to add windmill to mg_villages ?

Hmm. Might be a good idea. The block windmill is right now a pretty static issue. Having one with rotating sails would be nice. Right now, it'd require a diffrent windmill. I originally planned to have more things move inside villages so that they're less static. Just didn't get around to that part yet.

by poikilos
Images are expired, and I can't find anything on Google or Youtube showing this. Can you please repost?
All times are UTC
Page 1 of 1