Is there anyway i can tell a mob to pathfind to a set pos within mobs_redo?
Hey, what can i say? I'm the bad guy.

Stix: Mobs Redo API has built in variables that handle many of the workings and thankfully can be edited either by mods or having a mob's custom function kick in and set them to a specific value... In this case self.path.way holds a table of coords for the mob to follow using pathfinding and can be changed to make them follow a set path.

Is there any way to fix the way hostile mobs chase their targets so they don't do that goofy spinning thing when they're directly above or below the target?

I'm thinking mobs should switch to a different mode of horizontal movement once their horizontal position is within 2-3 blocks from the target's horizontal position, but I'm not seeing where best to put that kind of logic (or if another solution already exists).

So I'm trying to make a hostile NPC but it doesn't seem possible. Even with "attack_players" set to true, and "passive" set to false, they won't attack the player.
My Twitter (Not dead anymore!) My Youtube

Hi:)
1) i beg youre pardon for my langage. I’m french and don’t speak/write english good.
2) I hope no one explain what I'm trying write.
3) it is not really a problem. Just an observation.
4) Sorry for this big text: I'm trying be understand.

The "pen" (online traductor (or enclosure or paddock)) you can see on the screenshot is build : door, cobblestone, mob:fence, Planks.
Name horses : Arthur and Perceval. 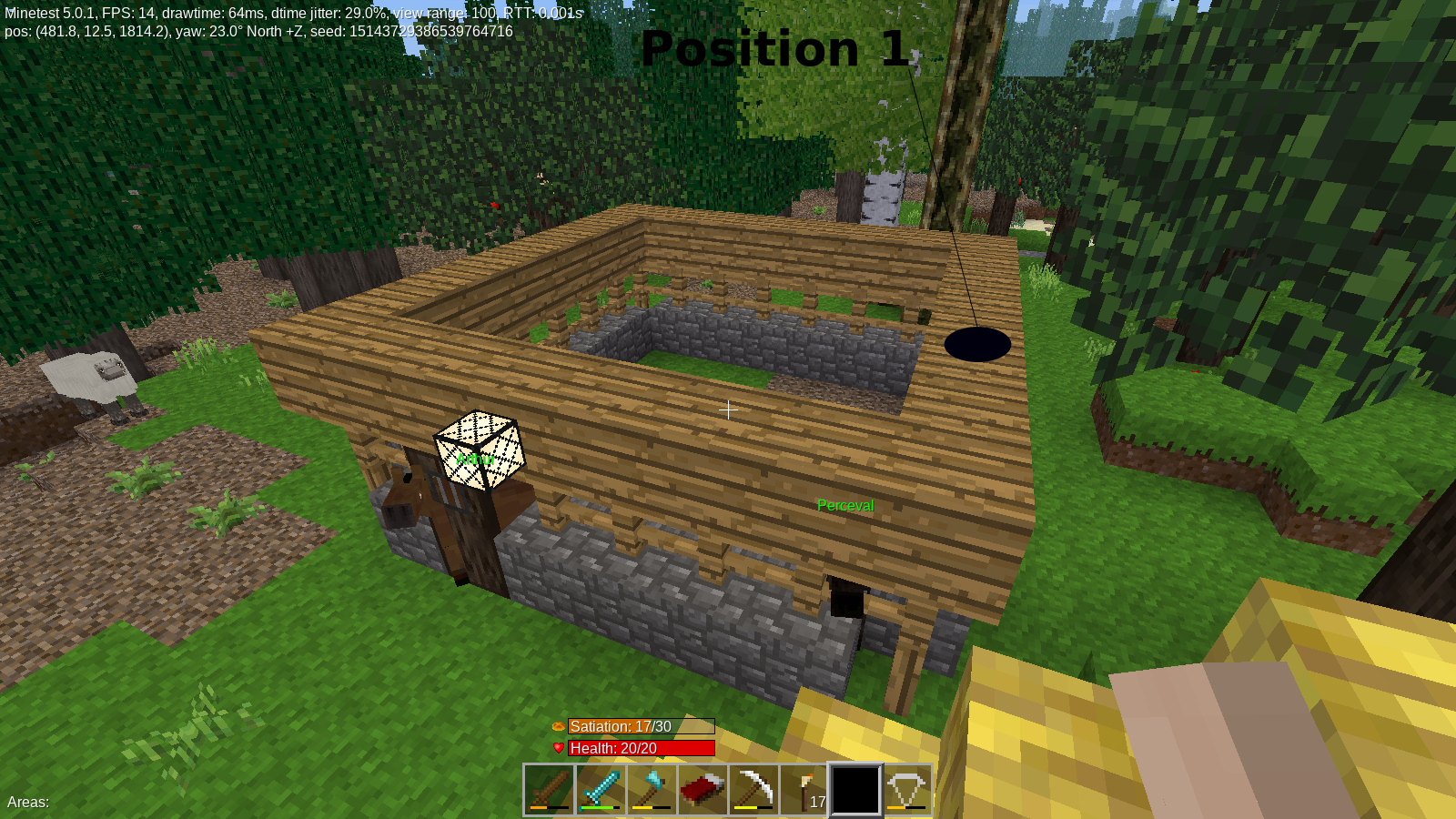 The first "pen" build was : door, cobblestone and mob:fence (without planks).


Sometimes I find one horse out of the first "pen" and I have see Perceval on the Position 1 (on the screen).

I have two hypothesis : a glitch with the door but I think Perceval climb on Arthur (it is not sexual) and after jump on the top (with planks) or out of the "pen" (without planks).
I think the probability that a horse escape need some conditions are true : Arthur must be against the wall, Arthur mustn't move, Perceval must climb on Arthur and the next jump on the top.
In other words, more the "pen" have a large surface area, the less this probabilities can't be true.

I have two others "pen" build as: 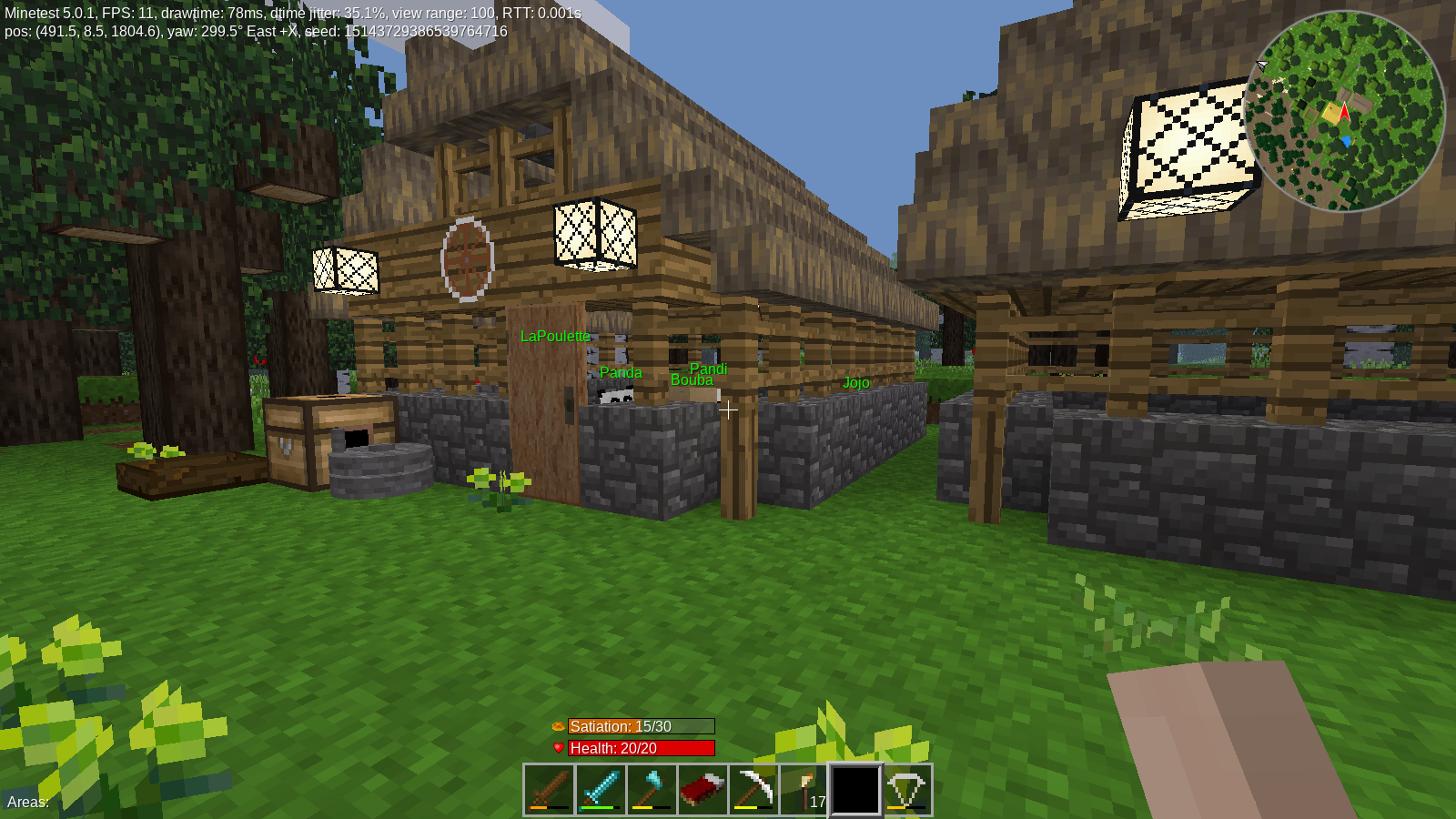 In one (with only one cow) I’m using a decorative bloc in and against the wall. I think the cow climb on it and use a glitch with the planks. But here, the decorative block don’t move. Since I remove this bloc, never the cow escape.

In the "pen" on the second screen, I have some animals. I have two chickens but now only one. I suppose the second chicken jump on an other animal and use a glitch to escape.

Maybe two suggestions : have a mob:door (maybe with sneak/shift+right-clic in order use the door) and have an other mob fence top working horizontally (as an invisible roof).

But, again, it is not a really problem. Just know it and build the "pen". Maybe use mob:fence on the top of an other mob:fence.

It is really a good mod and it working fine. Thank you very much !

Thank you for reading.

elceejo: a hostile npc is a monster :)

Is there a way to programmatically make an NPC appear at a specific position in the world?

Any idea on how to solve this?

EDIT: Nevermind, I've fixed it.
My repositories: Codeberg.org | My ContentDB's page | I'm on PureOS with XFCE

No mobs have appeared. Also, is it ok to combine this mod's folder with Pilzadam's simple mob's file folder? Both are named "mobs," and I had no choice but to combine them.

[Edit] Ok, the mobs have started appearing, at least the sheep are, I am unable to feed them wheat.

This mod should replace Pilzadam's simpe mobs folder. Delete that and just use this. Pilzadam's mod is old, outdated, and unmaintained. I'm surprised that Minetest even loaded the mod if you just merged the two folders.
I record Minetest videos, Mod reviews, Modding tutorials, and Lets plays.
Check out my website, and brand new Minetest Modding Course

Thanks for the help Nathan S. I was confused, I thought this mod was supposed to add on to Pilzadam's mod.

What is the official name for the animals mod accompanying this? (I need to name it's file folder accordingly for it to work in Minetest.)

Segmented Worm wrote:What is the official name for the animals mod accompanying this? (I need to name it's file folder accordingly for it to work in Minetest.)

Everything appears to be working fine now, this is a great mod!

What is the license of mob_horse?

You should add a LICENSE.md (or whatever the equivalent is on notabug) to Git.
-redblade7, admin of: THE CREATIVE GARDENS (creative), THE VALLEYS (sandbox), and THE DIGITAL FARMS (farming/hunger/shops)

I am trying to understand the spawn chance for my buffalo.

I am trying to get them to spawn in herds but not everywhere. based on the mobs_redo i have this so far...

What do i need to put in chance to make these things spawn occasionally?

regards.
The sky is not the limit - It's my playground

Steamed_Punk: If spawn chance is 8000 then a buffalo will spawn on every 1 in 8000 dirt, so the lower the number the more chance they appear, they spawn 1 every 30 seconds or you can set interval value to be less, but I wouldn't advise having active_object_count higher than 4.

TenPlus1 wrote:Steamed_Punk: If spawn chance is 8000 then a buffalo will spawn on every 1 in 8000 dirt, so the lower the number the more chance they appear, they spawn 1 every 30 seconds or you can set interval value to be less, but I wouldn't advise having active_object_count higher than 4.

Thank you tenPlus1, i was confused because (i think it was a node) the chance was saying something about 1.5 = 0.2 or something like that and then seeing 8000 blew everything out of proportion.

As for active_object_count, yes i am a little over run at the moment, i will drop that down. I have already been to your api but still needed help (ABM stuff :-( ).

Thanks again i can now update my mod here in the forums.
The sky is not the limit - It's my playground

Is it possible to add the ability to make saddles from something else (like plastic or whatever they are made from), to get saddles without killing mobs? Previously mentioned by Sokomine for Petz.

untiltoday wrote:Is it possible to add the ability to make saddles from something else (like plastic or whatever they are made from), to get saddles without killing mobs? Previously mentioned by Sokomine for Petz.