Thought I would start a new thread since I cannot see where there is one specifically for Mesecons computer builds. After stumbling upon some YouTube videos of Minecraft Redstone computer builds, I thought it might be cool to take a crack at it with Minetest Mesecons. I am by no means any expert at computer architecture, design, etc. so I'm learning as I go and hope to inspire my kids, who also enjoy playing Minetest to perhaps learn more about circuit design by playing with Mesecons too.

I'm getting my inspiration from Ben Eaters fantastic YouTube video series describing how to build an 8-bit breadboard computer. Obviously there are differences between building it on a breadboard and building it within Minetest, but my hope is that enough theory carries over as to make it a worthwhile endeavor. He does a great job of explaining first principles of circuit design and how complex circuits are built using discreet logic gates. As I progress through his series, I've been trying to recreate what he is doing in Minetest using the excellent Mesecons mod. My goal initially is to try to use Mesecons exclusively without relying on Digilines or other mods, but I'm open to using other mods if the architecture requires it.

I'll start with a small demo of some of the circuits used in Ben's computer. I posted this to the "Share your WorldEdit files" thread originally, but after giving it some thought decided to start a new thread since this will be specific to Mesecons (Digilines, etc) computer builds. I'm sure there are Minetest users out there with an actual education in computer science who could do something much more impressive than anything I will attempt. Even if you're just learning like me feel free to post the fruits of your labor here! circuit_demo_schematics.jpg
schematics of the circuits
(104.07 KiB) Not downloaded yet 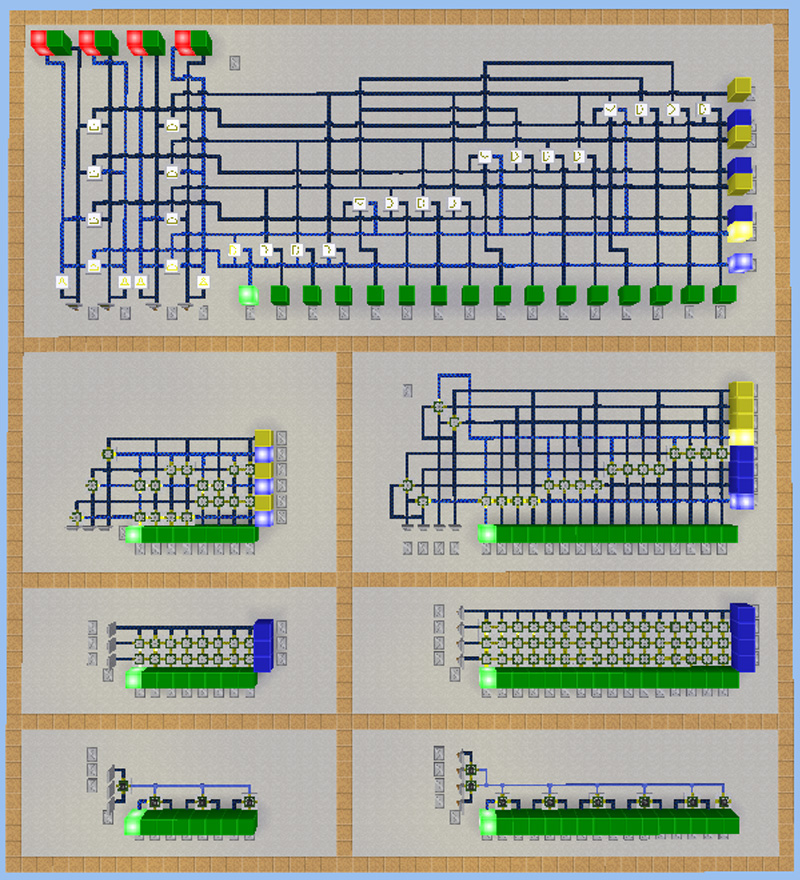 hopefully someday someone will build a microcontroller (maybe 4-bit?) in Mesecons ^^
My YouTube-Site with Minetest-LetsPlays and some of my Servers: Carpathian Ethereal Vanilla Creative MineClone2

Walker wrote:hopefully someday someone will build a microcontroller (maybe 4-bit?) in Mesecons ^^

Well, there is a microcrontroller in mesecons. Or is that what you meant? I found the Luacontroller much more flexible, but perhaps I'm misunderstanding something. Would you like to post a project demonstrating the uses of the mesecons microcontroller, beyond the preprogrammed options?
Mesecons 8-bit Computer | Realterrain Lite Mod

sorry, just noticed that I was MUCH too imprecise ^^

I meant to build a microcontroller IN minetest ... so from Mesecons gates
My YouTube-Site with Minetest-LetsPlays and some of my Servers: Carpathian Ethereal Vanilla Creative MineClone2

Haha, I gotcha. But seriously, if you (or anyone) has any Mesecons projects you want to share, feel free to post them here (even if it's not a micro-controller). Cheers! ^^
Mesecons 8-bit Computer | Realterrain Lite Mod

I actually completed an 8 bit cpu made entirely from mescons logic gates just this week. I was also inspired by Ben Eater's series. I'd upload it now but I'd like to make a video on how to use it so stay tuned.

bobbbob wrote:I actually completed an 8 bit cpu made entirely from mescons logic gates just this week. I was also inspired by Ben Eater's series. I'd upload it now but I'd like to make a video on how to use it so stay tuned.

Sweet, looking forward to checking it out!

I finished my first version of the computer, but I'm stumbling into road blocks using logic gates exclusively. One is the display combinational logic, which is massive, and the other is the memory address decoders, which get slower and buggier the larger my computer gets. I end up having to crank the clock down to a crawl to get the whole setup to function correctly. I might have to resort to Digilines/Lua code (at least for the display and MAR) to get it to function right, so if you have managed to pull it off with just logic gates I'd be very interested in checking it out!
Mesecons 8-bit Computer | Realterrain Lite Mod

Name: Register Demo
Volume: 11985 (47*5*51)
Dependencies: Mesecons
Relevant circuits: D Latch
Relevant videos in Ben Eater's series: Description: Some demos of 8 bit registers for testing. In addition to input/output pins, all registers include clock, reset, enable in and enable out pins. The shift register has one serial in rather than 8 input pins. Included registers from right to left in the screenshot are: 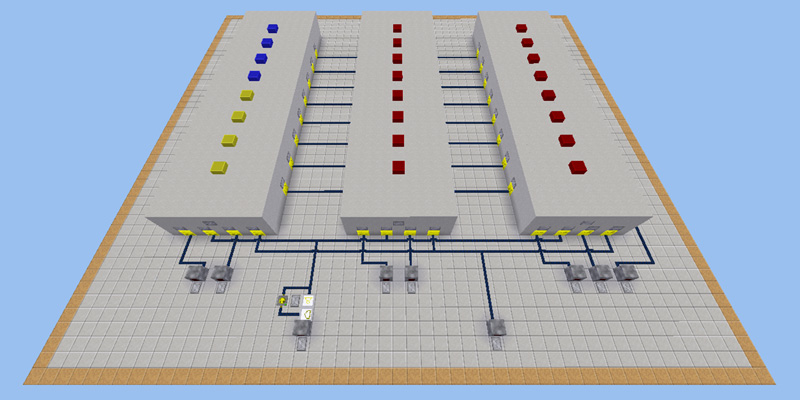 register_demo_schematics.jpg
(107.95 KiB) Not downloaded yet

I finished that video and made a thread on it, figured that would be better. I don't know how to link to threads, it's in the maps section.

Here's the entire wiring of the FPGA to create something that acts like a shift register.

This allows chaining the FPGA infinitely. It is possible to create marquee text displays or carrying a single signal slowly onwards (blinky plant connect to HOLD). 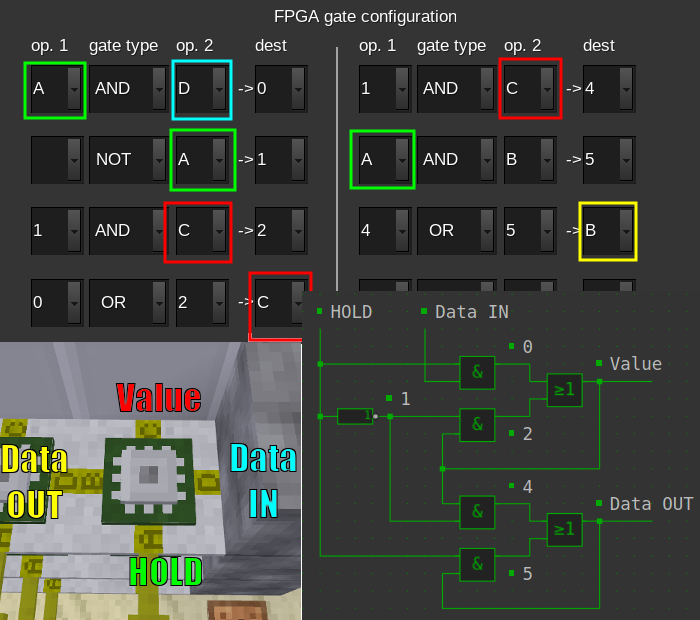 Fun fact: This circuit is unlikely to work in real life due to gate propagation delays.

illegal_shift_register.png
(93.13 KiB) Not downloaded yet

cool, I am going to also make a one
My English isn't very good because I'm Dutch ---- Check my mod "Doorbell" Vote your gang 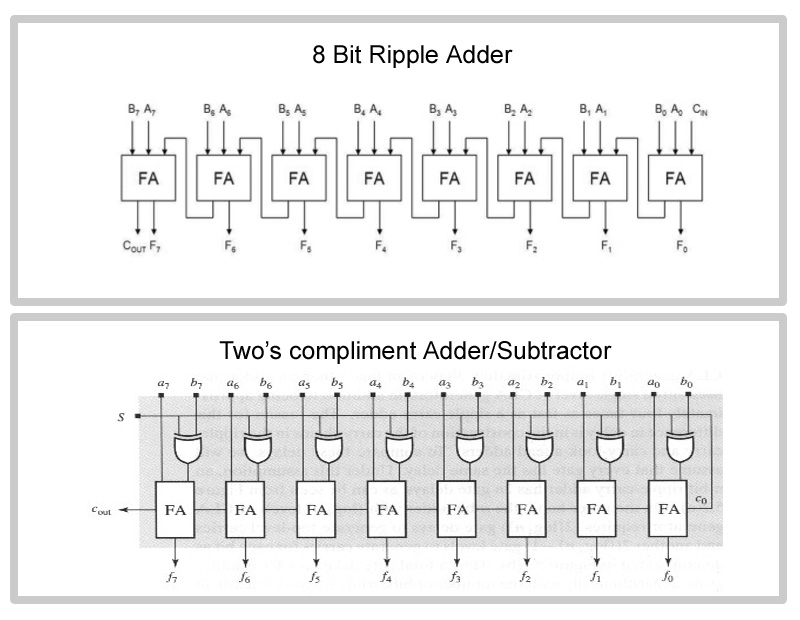 alu_demo_schematics.jpg
(97.27 KiB) Not downloaded yet

I made a 4 bit array multiplier, which is a design that does binary multiplication very fast. NOTE 1: use cpdef's fork of jogag's digilines-stuff project. He has fixed a critical bug required to use the memory chips. display-demo.jpg
screenshots and circuit diagram
(276.58 KiB) Not downloaded yet

Name: Clock/Counter Demo
Volume: 4200 (30*5*28)
Dependencies: Mesecons
Relevant circuits: JK Flip-flop (master-slave)
Relevant videos in Ben Eater's series: Description: The clock input of the front program counter is triggered by the "counter enable" (CE) pin. This counter can be set to the 4 bit number active on the inputs by setting the "jump" (J) pin high. The rear counter's clock input is connected to the on board clock, which is the inverse of the first clock. It supports up to 8 micro-instructions per instruction, but can easily be expanded to 16 micro-instructions by simply replacing the place-holder blocks in the highest bit value position with a mesecon to complete the connection. I finished the completed computer a few months ago, but just never got around to posting it. I thought I would wrap this project up and tie it with a bow so I can move on to other projects. It's been fun working on it. I made a web page with the downloads and dependencies, also a video description of what the computer can do.

Great work!
I'm planning on creating a tutorial/lab in form of a game that features your schematics.
Whats the license on them?

My Mesecons computer project is licensed under a Creative Commons Attribution-ShareAlike 4.0 license, which includes any .we files included in the download and any demos I posted on this thread.

But if your referring to the images of circuit schematics I posted in the thread above, I drew the RAM module, display decoder and binary clock schematics myself so I feel comfortable offering them up under the same license. The others I just yanked off the internet, so you may want to google image search them to find their original sources.
Best of luck!
Mesecons 8-bit Computer | Realterrain Lite Mod
Post Reply
20 posts • Page 1 of 1