https://learnopengl.com/Advanced-OpenGL/Geometry-Shader <- Reference you asked for
My stuff: Projects - Mods - Website

No. I hate Java. I started I finish, unless I die before.

Thx for the ref.
+ Spoiler
Just a question about it: it acts like another fragment over the vertex or something like that?

EDIT: Apparently not. LOL. Is there a way to make this code work as a *two-time render*?

Achieving transparency without any depth sorting nor visual bugs
details: I splited the code in the spoiler in a two pass render. No geometry shader used, no impact of performance. I'm proud of myself, can I? :D 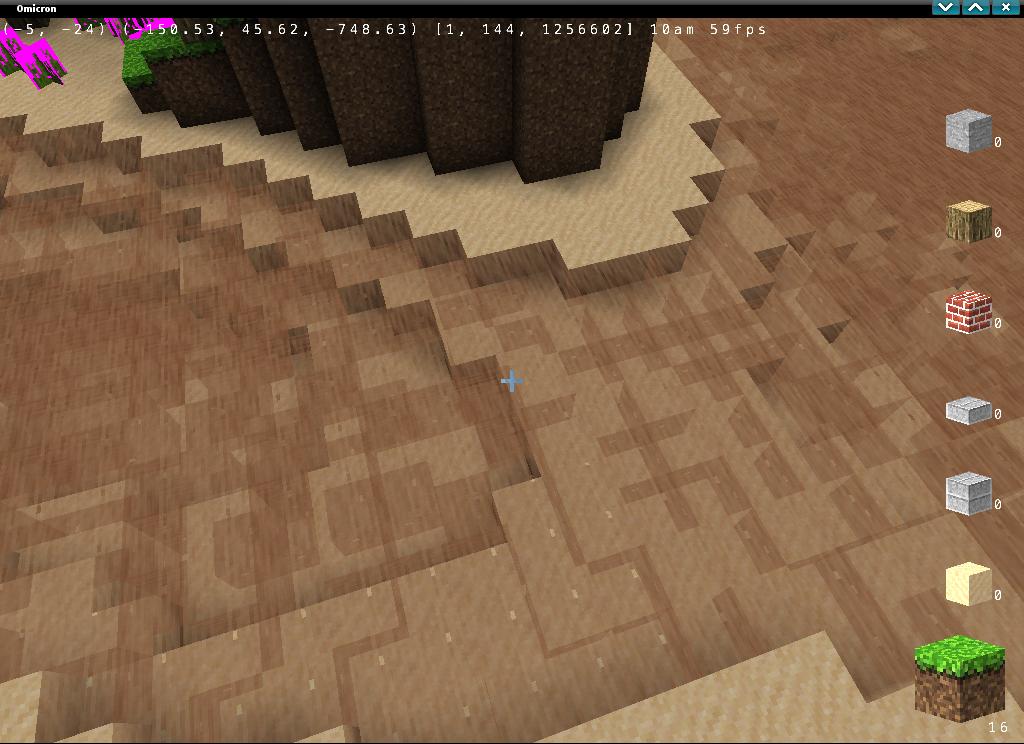 Forget the color of water (it's for debug) and the weird faces inside water this isn't related to shaders. Should be fixable more easely now.

EDIT<lost count>: for some reason the grass is pink. xD

screenshot-THUGLIFEOFTRANSPARENCY.jpg
*I'm smiling like a debil since 5 hours*
(94.4 KiB) Not downloaded yet

No, there's no way. 2nd rendering stage can only be achieved by FBOs.
My stuff: Projects - Mods - Website

Just calling two different rendering functions. One only render opaque things, doesn't even consider alpha (no performance loss) and the second only renders transparent things. (some small optimization can still be achieved, but my fps sticks up to 60fps so I see no problem) The ugly faces will be removed, I need to edit the chunk renderer in order to make him forget transparent blocks in some way.

screenshot-transparency-works.jpg
*after removing debug colors*
(147.81 KiB) Not downloaded yet

ah, seems I got you wrong.
My stuff: Projects - Mods - Website

NP dude. IT works and only this counts!


EDIT: I have an idea on how to get rid of this bug. I will try to make blocks near transparent blocks render their faces. It shouldn't lower performance at all (60fps with every water block rendering all his faces), and it should even get rid of the ugly bug with slabs (place Something opaque on top of it, the top face of the slabs disapear allowing easy Xray). If I manage to do that, update.
ＯＭＩＣＲＯＮ - pre-release 0.7 "Tweaky Update"

DEVLOG: Image speaks for itself... 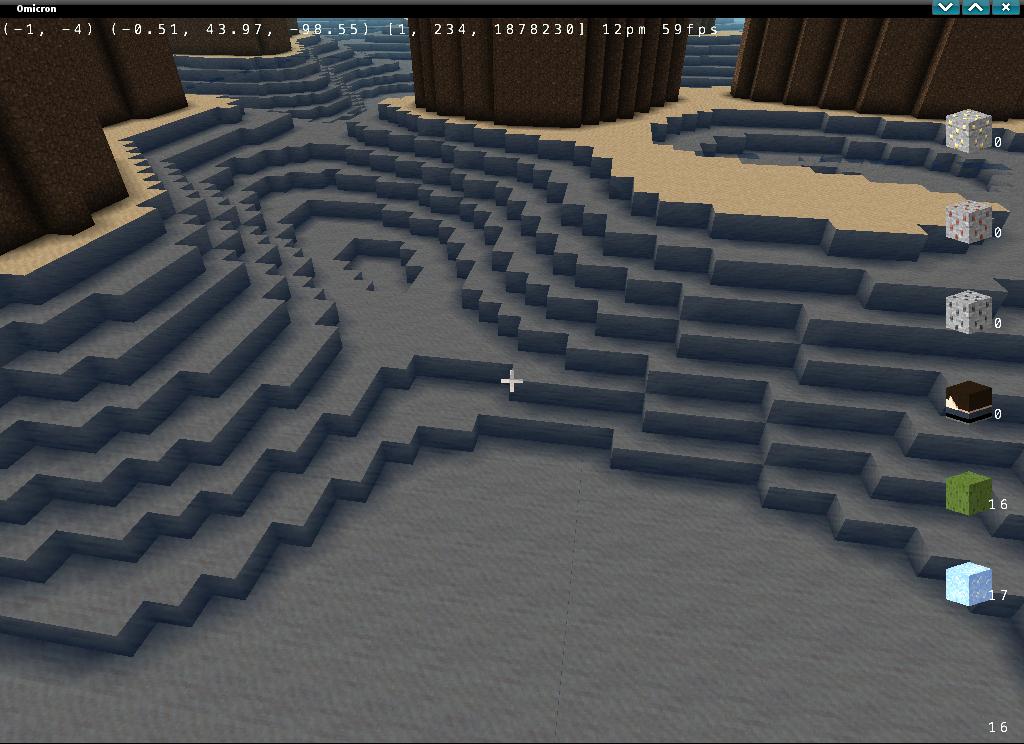 screenshot-water-works.jpg
Chunk errors are really visible however. It's another glitch.
(100.02 KiB) Not downloaded yet 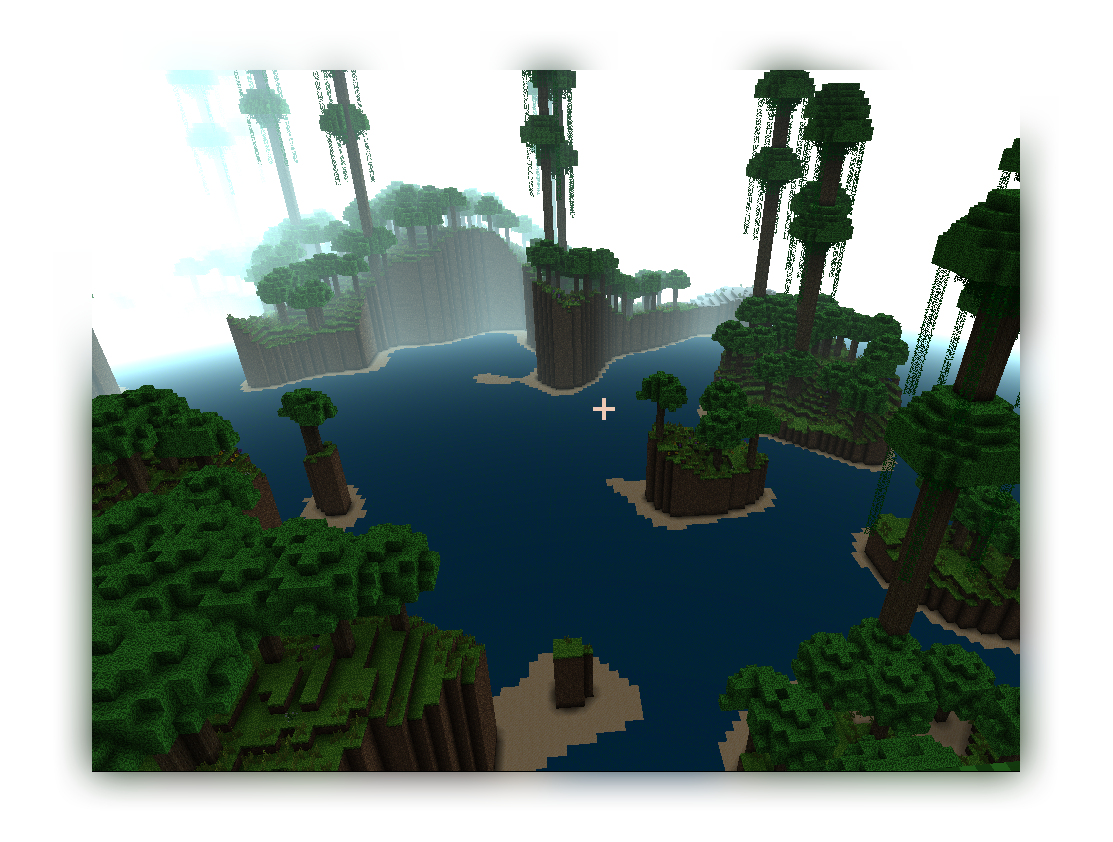 Here is another update in relation with water... But there's a good reason, you'll find out why quickly!!!
*red is important.

Images of what you can now see ingame (note some are a bit out-of-date): 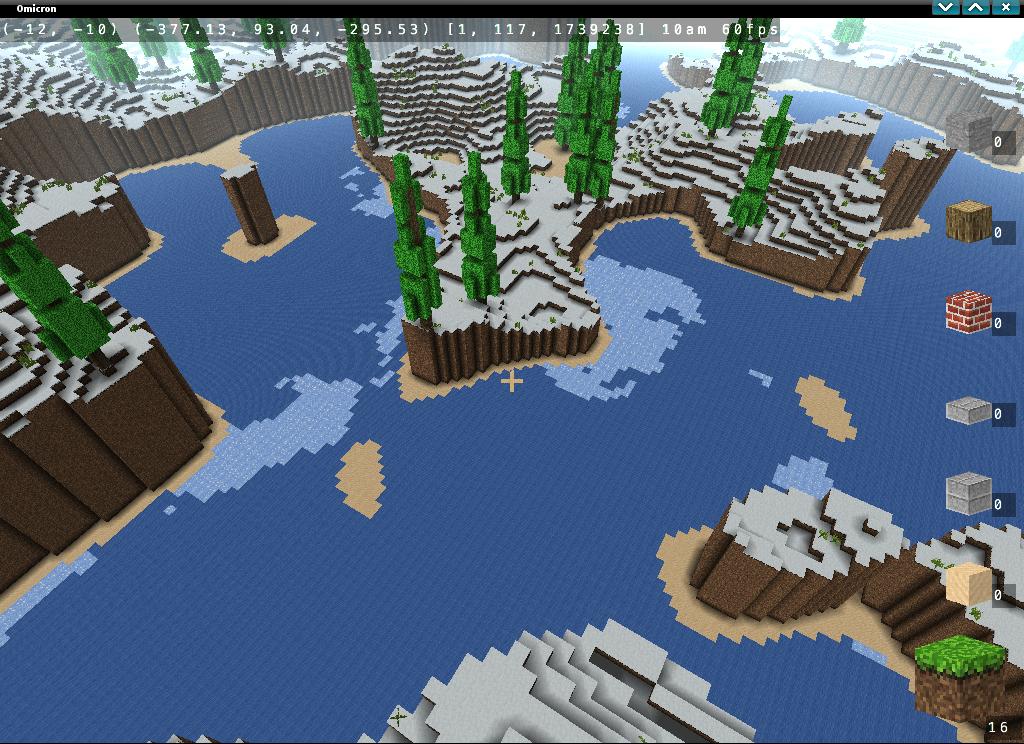 An ice biome with icebergs on water (now transparent). 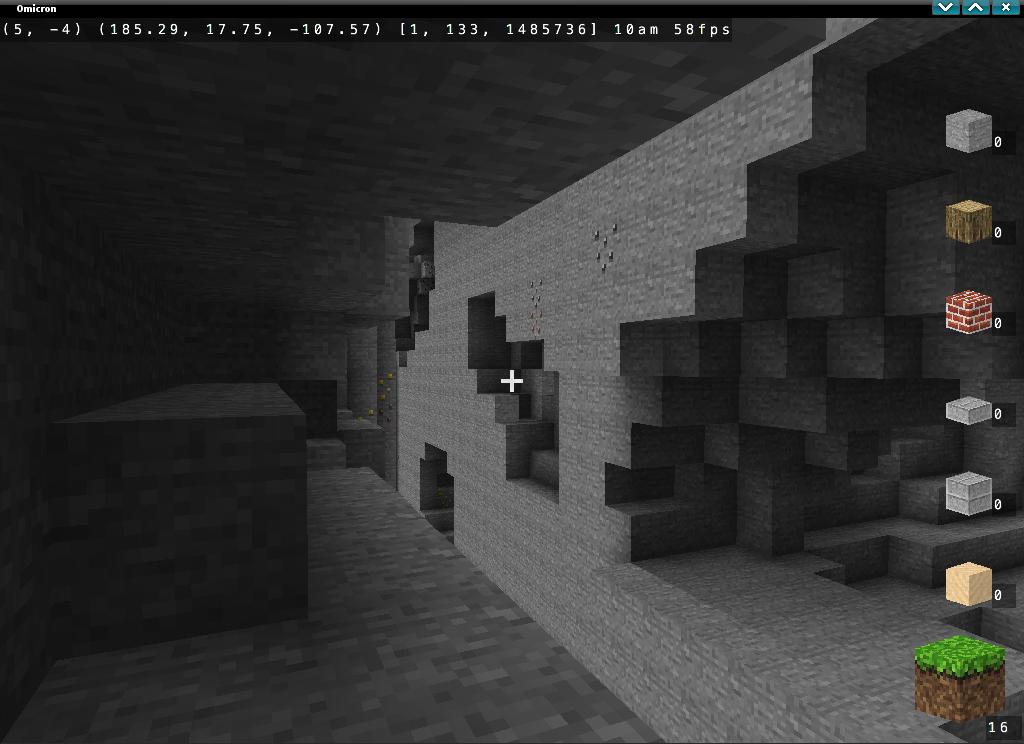 The /help command in use.

Transparency at work! (water is much darker now, this shade was used to debug) This is the biggest update I did so far... Please tell me what do you think of it!
ＯＭＩＣＲＯＮ - pre-release 0.7 "Tweaky Update"

0.0 so how did you finally fix the transparency
My stuff: Projects - Mods - Website

Do you want technical info? It's a bit long to explain

EDIT: in short, water looks around to see if one of it's buddies here. If there is one the face touching it becomes transparent... It's still really experimental...
ＯＭＩＣＲＯＮ - pre-release 0.7 "Tweaky Update"

So you only draw the top faces, and are somehow lucky Omicron's renderer already sorts 'em in right order ? Noice !
My stuff: Projects - Mods - Website

There is no luck, only skill :P I changed the renderer.

BTW: I Don't only render the top faces it renders one that you're supposed to see (if you put a flying block of water it will render all it's faces for example). There isn't overlapping problems as far as I know :D
ＯＭＩＣＲＯＮ - pre-release 0.7 "Tweaky Update"

So it renders all faces with no neighbouring face ?
My stuff: Projects - Mods - Website

LMD wrote:So it renders all faces with no neighbouring face ?

When nothing except transparent blocks other than water are near it renders all it's faces. I think this kind of optimization will be done with all transparent blocks :D It will allow leaves to be to.
ＯＭＩＣＲＯＮ - pre-release 0.7 "Tweaky Update"

Figured I'd take this for a spin but there's a problem: https://pastebin.com/f1LBkaZ9
Mods | Support Mesehub: bc1qluuests9rxmlnvpjrhsnyjg9ucwy6z3r0y3srw

Okay so all the warnings and stuff it's normal, for a 2015 project, there is obviously a lot of deprecated stuff. Well the compilation worked… (it's amazing btw)
For the shaders it's the fault of open GL, It needs to be recent enough to support version 130. you should try to update it… But I have a fix for you!

2> step two
then open block_vertex.glsl and edit the first line to '#version 120'. Only this.

3> step three
then open tblock_vertex.glsl and edit the first line to '#version 120'. That's it!!

This should work fine. You don't even have to recompile the project.

EDIT / DEVLOG: I added a bunch of new blocks. Here's a screenshot of the actual state: On the foreground there is clay next to sand. A bit behind, on the ground, there's sandstone and sandstone bricks. Then there's a line of plants, from left to right : New cactis textures, fern, mushroom, mushroom patch. Finally in the background you can see a wall made of cobble and stonebricks.

screenshot-new-blocks.jpg
(82.78 KiB) Not downloaded yet

*bump*
----------
Texmex any news? Did someone found out some odd things in the update?
I can only work the weekend for now, and not Always… Sorry!
ＯＭＩＣＲＯＮ - pre-release 0.7 "Tweaky Update"

I haven’t got around to try it again. Will report back once I have.
Mods | Support Mesehub: bc1qluuests9rxmlnvpjrhsnyjg9ucwy6z3r0y3srw

+1 for being written mostly in C

it looks promising. But it won't start on my Xubuntu system. But Craft and CraftNG do.

can you give me some debug? seems some linux are allergic to some database glitch. Does it segfaults at start?

Unfortunately i'm ignorant on how to compile things, so i haven't been able to test this out yet. But i do visit this thread almost every day for updates, and i like the direction things are going.
Hey, what can i say? I'm the bad guy.

Stix wrote:Unfortunately i'm ignorant on how to compile things, so i haven't been able to test this out yet.

I promise the releases will be usable without compilation. I may need someone to compile out things Under Windows and Mac. (my Windows is an horrible glitched mess, every update brings new bugs, and I Don't have a Mac nor a way to use one)


But i do visit this thread almost every day for updates, and i like the direction things are going.

Thank you stix. I'm happy to hear you like my work :D It makes me feel like I'm not doing Omicron for nothing.
ＯＭＩＣＲＯＮ - pre-release 0.7 "Tweaky Update"

azekill_DIABLO wrote:can you give me some debug? seems some linux are allergic to some database glitch. Does it segfaults at start?

Thx for trying out btw :D

Unfortunately, the game just exists immediately without any note on the terminal! But it still displays the artwork of "a game by azekill Diablo" and the "press return to start". After that, a black window appears and then disappears immediately. That's all I get!