Why make the same mistake like Minetest devs and limit yourself to a very narrow set of bitmap letters instead of properly implementing Unicode and good font rendering from the beginning on?
German Let’s Play Channel | Officially released content

Linuxdirk wrote:Why make the same mistake like Minetest devs and limit yourself to a very narrow set of bitmap letters instead of properly implementing Unicode and good font rendering from the beginning on?

Argh! Negative criticism! Can't withstand the power!
I would love to it personally. But I Don't know how to do it yet.
And I'm not even capable of changing the font size!

In short I already felt very incompetent now It's below this level.
BTW: the thing isn't even released it's only some test work now. The font part seems to be handled by 20 lines of code so I should be able to modify later on.
ＯＭＩＣＲＯＮ - pre-release 0.7 "Tweaky Update"

I wouldn't even worry about the font stuff if it is readable. A game is all about, GAMEPLAY!!!
Become A Real Life Superhero - http://SuperheroHill.com
Project Lead of the Doom 3 Mod Last Man Standing - http://Doom3Coop.com
Project Lead of Platinum Arts Sandbox Free 3D Game Maker - http://SandboxGameMaker.com
Youtube Channel - https://www.youtube.com/user/PlatinumArtsKids

I would. Don't make the same faults as MT - a gui has to be stable/reliable and resizable - like a good arrangement and scaling. A good example is the Java GUI.
Use some lib, probably - like ImGUI.
My stuff: Projects - Mods - Website


Don't make the same faults as MT - a gui has to be stable/reliable and resizable - like a good arrangement and scaling.

What am I working on already? You're talking of making the GUI resizable even before I made it!


A good example is the Java GUI.
Use some lib, probably - like ImGUI.

"What am I working on already? You're talking of making the GUI resizable even before I made it!"
- just keep it in mind ! A fixed font size for instance is a bad idea.
Java was just an example - cuz I <3 java !
"imgui is c++"
well then why dont use another c99 lib ?
My stuff: Projects - Mods - Website

just keep it in mind ! A fixed font size for instance is a bad idea.

I was saying the same thing.


well then why dont use another c99 lib ?

I couldn't find any C lib for GUI (small ones, I don't need an enomous thing)
And I can already make my own GUI simply using OpenGL and C.
ＯＭＩＣＲＯＮ - pre-release 0.7 "Tweaky Update"

I found the way to change the font size, fairly easy. The guy who did it before me is really brilliant and organized.
EDIT / DEVLOG: I'm making important progress in the GUI. I understood how to place text around while taking in account it's size so this is a good point! The font size is how changeable in the config.h file.

I'm now starting to work on the render of textures in the menu, I'll create a function that places the whole menu with it's different elements.

DEVLOG: I finally made a working menu for Omicron. For now it's simple, some text and a fancy (hover animation) button that works. Simply click on play and game launches instantly. A part of the loading time is absorbed by the menu so you spend less time waiting. Optimizations are required still, but hey! it's a great new! 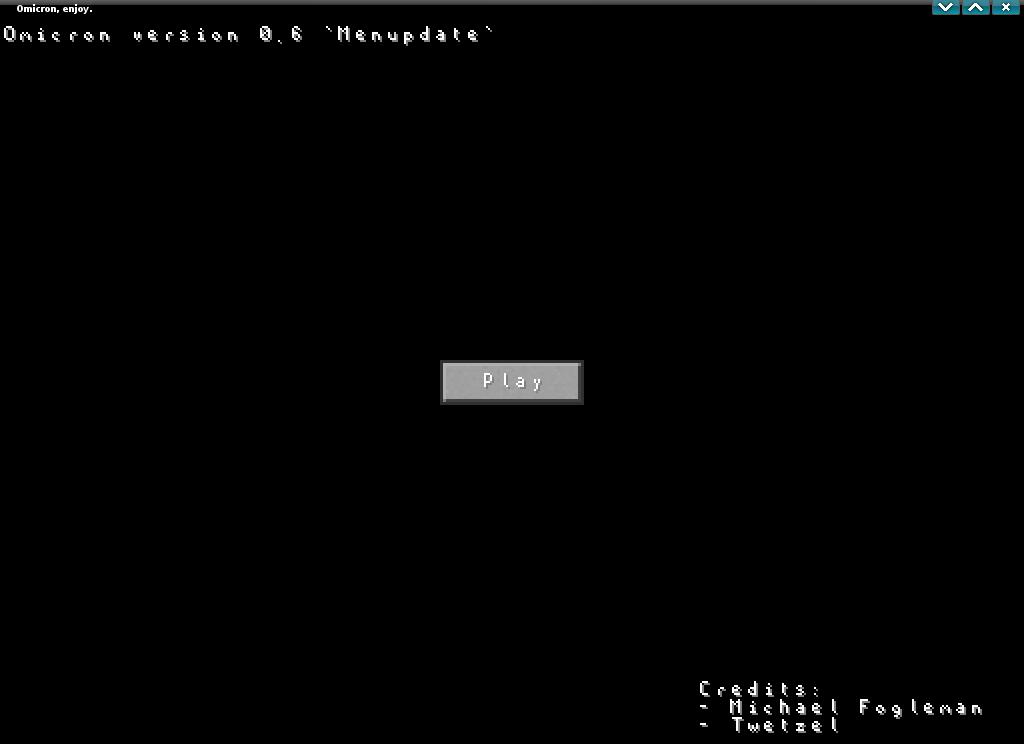 It will obviously be improved with a background and a 'leave game' button. In the long term parameters will appear too. BTW: Check the new font with shadows :P

screenshot-newmenu.jpg
It'll get improved!
(23.39 KiB) Not downloaded yet

I was think of removing the basic "stone" and replacing it only with real life rocks like basalt, marble, obsidian, andesite, limestone and chalk. It's quite a good list for now, I'll add more and maybe remove some later.
ＯＭＩＣＲＯＮ - pre-release 0.7 "Tweaky Update"

Today I'll be working on the logo of the game... I don't have many ideas, tell me if you have some!
ＯＭＩＣＲＯＮ - pre-release 0.7 "Tweaky Update"

nice idea! It can be a good concept… For now I just wrote the actual thing in game and screenshotted to have Something like the old Minecraft logo I Always found nice and clear.
ＯＭＩＣＲＯＮ - pre-release 0.7 "Tweaky Update"

Are you going to make any YouTube videos showing your game in action? Maybe even a few animated GIFs?
You can now find my videos at BitChute: https://www.bitchute.com/channel/some_cheeky_jinuskian/

It's planned, but I'm waiting for the game to have a bit of a stable developement state, there's no point of showing things that will be outdated in a less than a Week with GIFs and Videos.
ＯＭＩＣＲＯＮ - pre-release 0.7 "Tweaky Update"

I don't know how to render a texture on a 2D surface right now. It's embarrassing. I'm gonna drop it and work on other things and hopefully release a proper update someday.
ＯＭＩＣＲＯＮ - pre-release 0.7 "Tweaky Update"

Please come and compete for the logo creation contest on discord. If you don't have Discord, post them here and they'll be posted on the revelant thread (as your work with all credit). Have fun!
ＯＭＩＣＲＯＮ - pre-release 0.7 "Tweaky Update"

As only LMD posted a logo (and inspired me for some reason) I made the logo:

Some changes are still to be made though, especially concerning the white around it.
ＯＭＩＣＲＯＮ - pre-release 0.7 "Tweaky Update"

I like the color gradient and how simple you kept it. I would propose you too remove that grey stuff on the front face.
Last edited by LMD on Sun Nov 25, 2018 19:32, edited 1 time in total.
My stuff: Projects - Mods - Website

Thank you! I'll try to add it to the menu next weekend!
ＯＭＩＣＲＯＮ - pre-release 0.7 "Tweaky Update"
Post Reply
217 posts