Minesim is a subgame that mainly consist into a slightly tweaked Minetest game plus an addition if slightly tweaked mods. It has a relaxed, realistic oriented approach but there's no aim for hardcore simulation or any other big changes to the standard gameplay. The best way to describe it by now is a reflection of my personal taste.
+ Spoiler 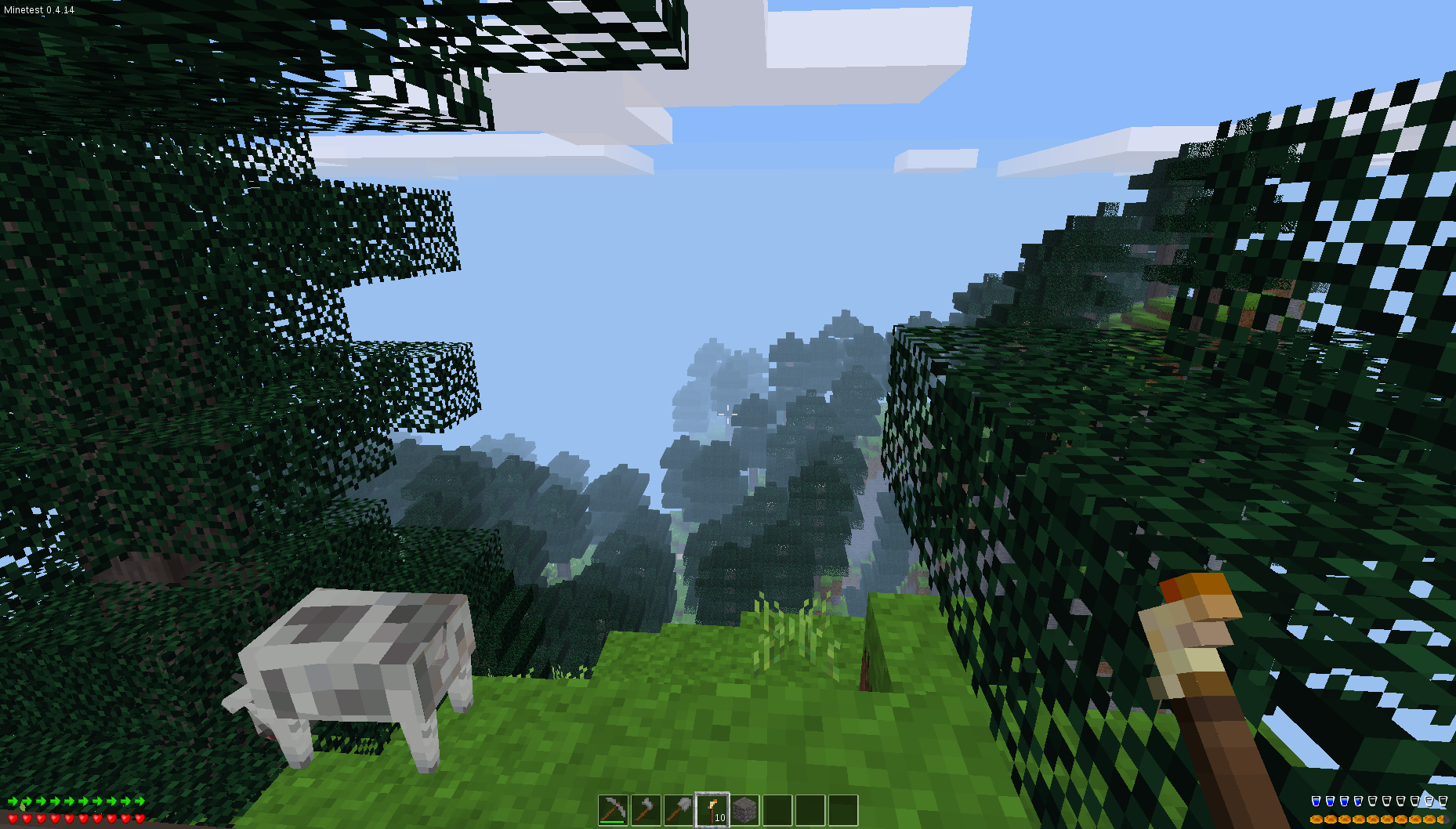 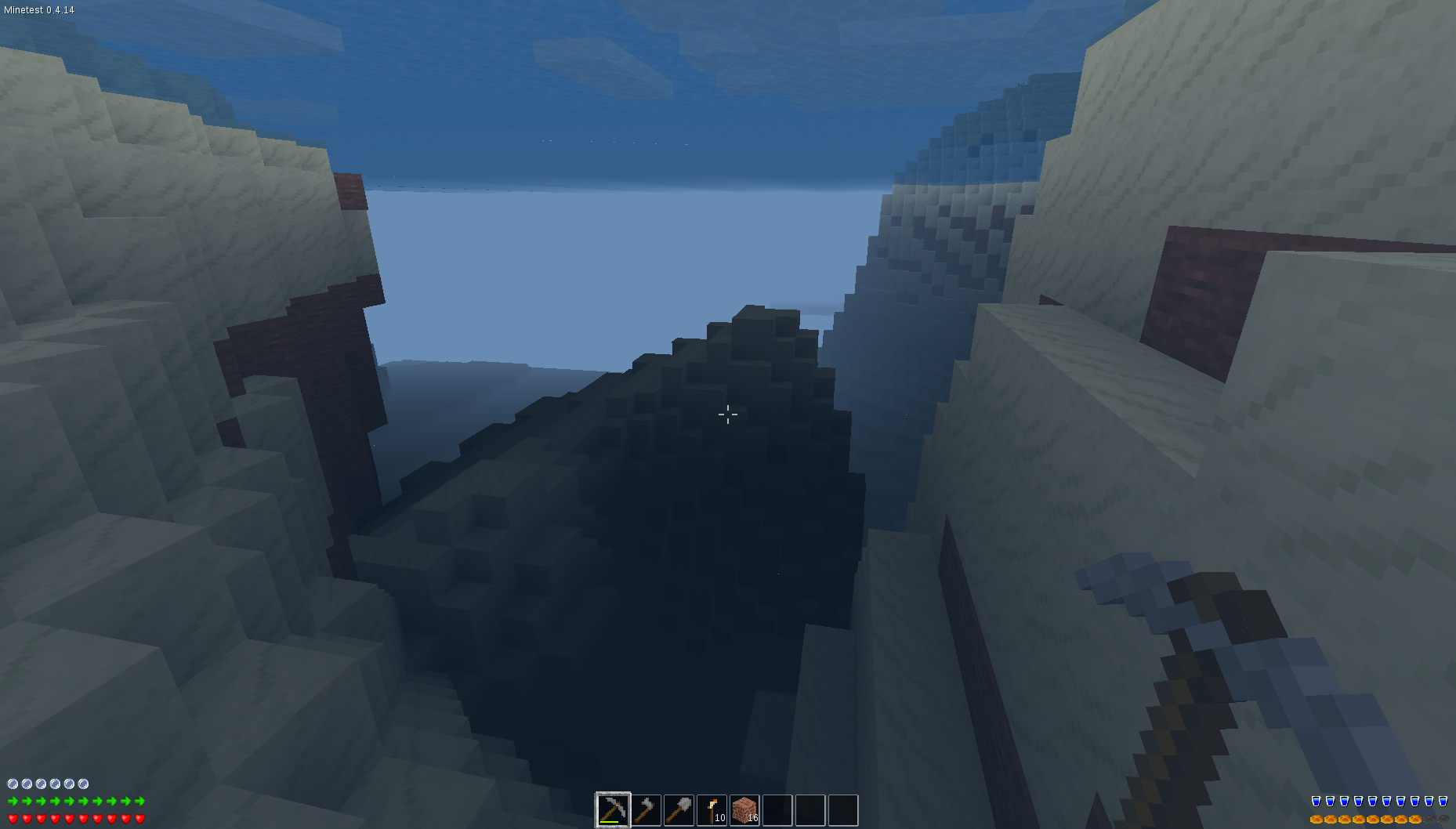 + Spoiler
For the first release, all of the mods from Minetest game are included with the following tweaks and configurations:
+ Spoiler
For the first release, the following mods not included already in Minetest game are added with respective tweaks:
+ Spoiler
All code is released under the LGPLv2.1+ licence and all media content under CC BY-SA, unless otherwise specified inside the single mod.
All the credits go to the respective code writers and artwork creators, and a big thank to all of them!

Now the combination of freedom with bits of realism and challenge should make the game interesting enough to be played.

The next release is likely to include an acceptable logo, an adaptation of my spears and I'm also evaluating some kind of decay for torches.

why no one answered this?!This is great! you've done a great job here :) I will download!

an idea: add some plant fibre, craftable with grass and leaves or maybe other plants, which could be usezd to craft tools! it would be harder that just putting 2 ingots and 2 stick to get a hoe :)
ＯＭＩＣＲＯＮ - pre-release 0.7 "Tweaky Update"

I've used this subgame on a small server for some months now. We're very happy with it! I forked it to get rid of bewarethedark and mesecons. I feel they over-complicate the game a bit. For light machinery I'm trying out the wip automation mod.

I'm glad you like it!
I don't know how to help with the axes unfortunately because I did not touch their properties and "choppy" stats, just removed the "breakable_by_hand" ability from trees.

You should add an item drop mod. your subgame should be default as it's very lite and complete.
ＯＭＩＣＲＯＮ - pre-release 0.7 "Tweaky Update"

Long time has passed, the game has moved on and i barely found the time to notice it... time to repair.
By now, the first release of this year will be just an adaptation to the features of 0.4.15, which merged into upstream a lot of nice things and mods, while also upgrading everything else to the latest release.

Life is changing quickly as I'm starting my first real job, but I still hope to come up with some nice new feature someday!

Could make the no_sneak_glitch configurable in the minetest.conf file? I love your game, but I really like the sneak glitch and is a major reason I play Minetest and not Minecraft.

Thank you for your consideration.
CM
ClaudiusMinimus

Follow my blog at: ClaudiusMinimus' Universe
Visit me at the incredible Illuna Universe

Update 2017.05 released!
It took quite longer than expected but here it is :)
Sneak glitch is now configurable, set no_sneak_glitch = false in minetest.conf to have it back. Also, spears have been added because hunting cows from the distance is much safer. Check their topic for more info.
Have fun!

So little time to get used to 0.4.15 and our devs already released 0.4.16, which unbelievably brings even more Minesim features to default!
It's kinda amazing, even if I've no clue whether Minesim has been the source of inspiration, but it's nice to believe it :D
Beside the great new release, what we get actually is a subgame which looks obsolete. I think it does not really make any sense to maintain it without meaningful differences from Minetest_game. So, unless some great idea will come out, I will probably keep the remaining as a modpack, to preserve its feeling and make it easier to create new combinations.
I hope you all had fun and will have more!
Post Reply
11 posts • Page 1 of 1