As the name "extra Environment" the game aims to contain extra environments and things. The current goal is to create a adventure game full of things to explore.

The game also have api's for code we are repeating, eg plants/trees, tools, furnishings ... this speeds up the modding, also alows "automatic modding" becaouse those api's only needs 1 or 2 textures with a name to generate a bunch of items

Beginning tips: You are starting with a craftguide (or it becomes way to hard to start) Tools can only be crafted by workbench except flint tools (for realistic reasons :) Get stricks from leaves and ground, get flint from sand and craft with sticks to tools.

You becomes hungry and tirsty, eat fruits or meat and drink fresh water to survive. (drink by punching into water)

The game does not contain gross violence, magic, occultism or any other supernatural phenomena, but monsters (brings some action)

No changes logs, its just too many changes to list and remember, you probably sees the changes clearly in the game, or in this forum :)

by AiTechEye
loooots of things has been added, anyone that are willing to try? ... making sure its stabile.

there is bugs in some forspecs but i dont know how to fix them right now, (just dont shift+click the output slots)
fixed

by AiTechEye
I still have lots of ideas to add (those just never ends) but do you have ideas to contribute? 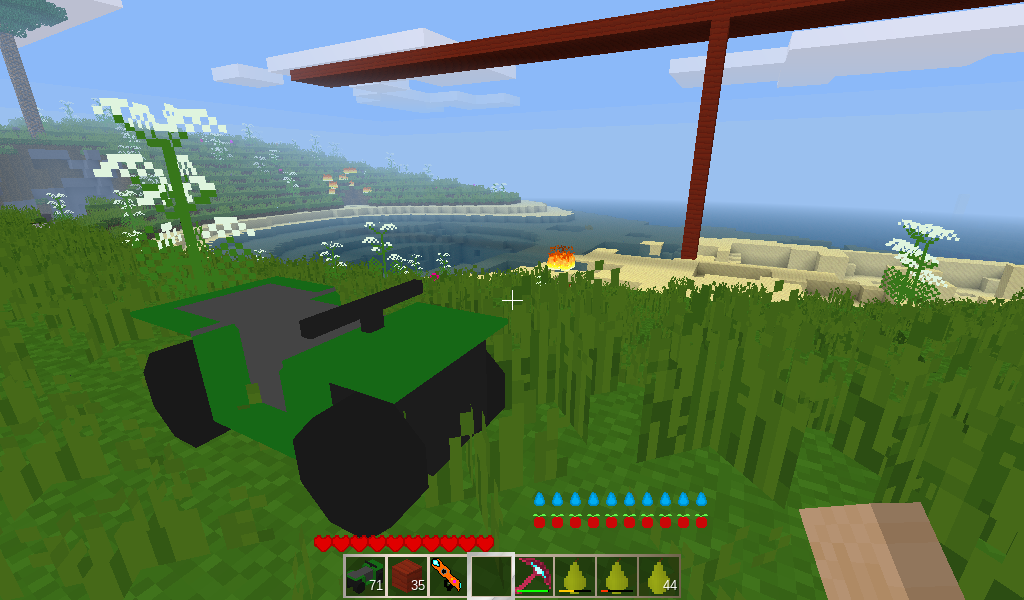 + quad
you can run fast and in hills, do stunts and flips. (hold use/aux 1 in air)
currently it's uncraftable and unlimited fuel but fun!

by twoelk
mind giving the quad texture a little noise? good idea! now it doesn't looks like a toy by Sokomine
The quad looks very nice. Hope to find one somewhere to drive a bit with it :-) According to the screenshots, it has just the right size for a vehicle.

by v-rob
I tried this game out a bit. I didn't try it for very long, admittedly, since there was no creative mode, and I like to use that to get a feel for what a game has in it, but the things I did see I liked very much.

I especially like the swimming animation and the ability to crawl with sneak. That's such a useful feature; every game should have it. The textures are quite nice, and the oceans are very pretty.

I'm supposing the mapgen is a Lua one because it's a bit slower to generate and has some quirky rectangular indents.

Once this game gets a little more mature, I'll try it out again.

by AiTechEye
i starting to realize how much creative is needed, until now i just used unified Inventory for this, and this is also messing while testing.

you can do wallrunning too (run & jump very near a wall)
i would love to add wall/edge climb up too, since i exercising much parkour on my free time... i will try to do it anyway.

What would you prefer, placeable craftguides and as workbench is now, or more like unified Inventory?

by v-rob
I tried out wallrunning... O_o I have to say that it's one of the coolest mechanics I've seen in Minetest! It's a little hard to do, but once you master it, there's no end to the possibilities. I already made a secret tree base with a nasty parkour entrance for any curious visitors :-)

As for the craftguide, I like it as a placeable thing because it makes it harder to just craft things anywhere.

Stairs and slabs are useful, but not necessary. IMO, it doesn't matter too much since this game isn't designed to be creative and therefore stairs and slabs have less use.

by Eran
Hey, I got this error on the version on the master branch. It seems to happen when I press E. Game looks nice otherwise though.

by AiTechEye
I just noticed and fixed the annoying fact, that minetest doesn't returns nil settings as true, because those should be true by default, instead those was nil in a bool setting?

by AiTechEye
this game is more challenging then mtg :)

just added walledge/climb up, this means you can climb everywhere., just walk into a wall edge.

this was the point of the hook mod, but it became something else 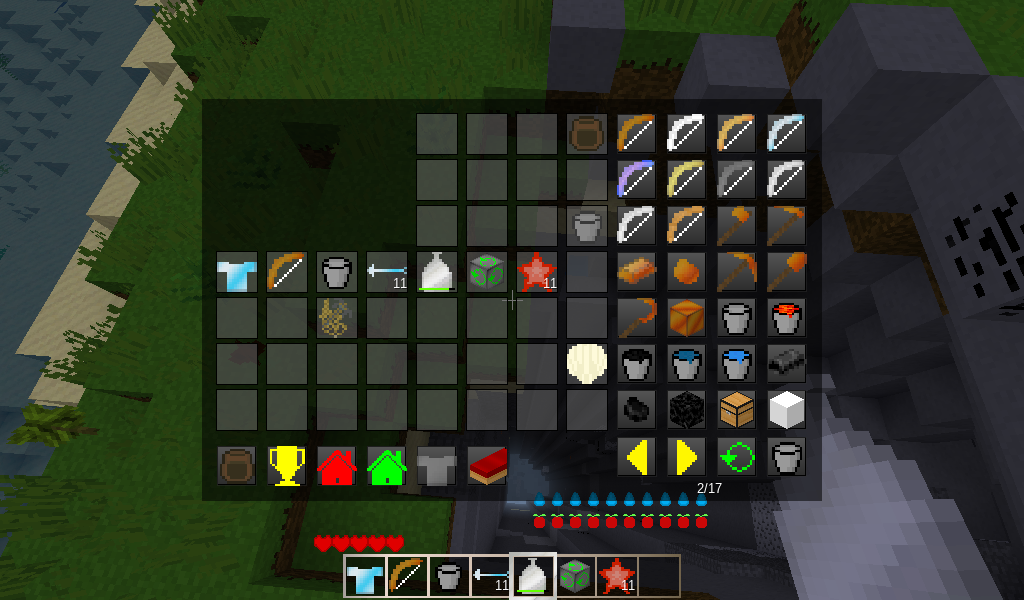 by MHL
One of the best Minetest games I played. There are a few problems though. First, it's very easy to die. I know that this game is supposed to be hard, but not too hard - it's a bit unrealistic that a small duck killed me in about 4 seconds when I was at full health. Please add a 0.5 second interval beetwen animal punches (ATTACK - 0.5 SEC DELAY - ATTACK - 0.5 SEC DELAY - ATTACK, etc.). Another problem is that the food and thirst timer is too slightly too fast.

by AiTechEye
good opinions, but the mobs is not using dalays withile the puching, just randomly, but i halfed the punch chanse for common animals and monsters (you will notice the diference), and yeah, those killed you too fast.

i will make the skeleton aim better too

by AiTechEye
the new "exatec" or item transporting mod are now working, and works with the most storable blocks.

the idea of the mod are primarily item transporting, but also some kind of mesecons too. 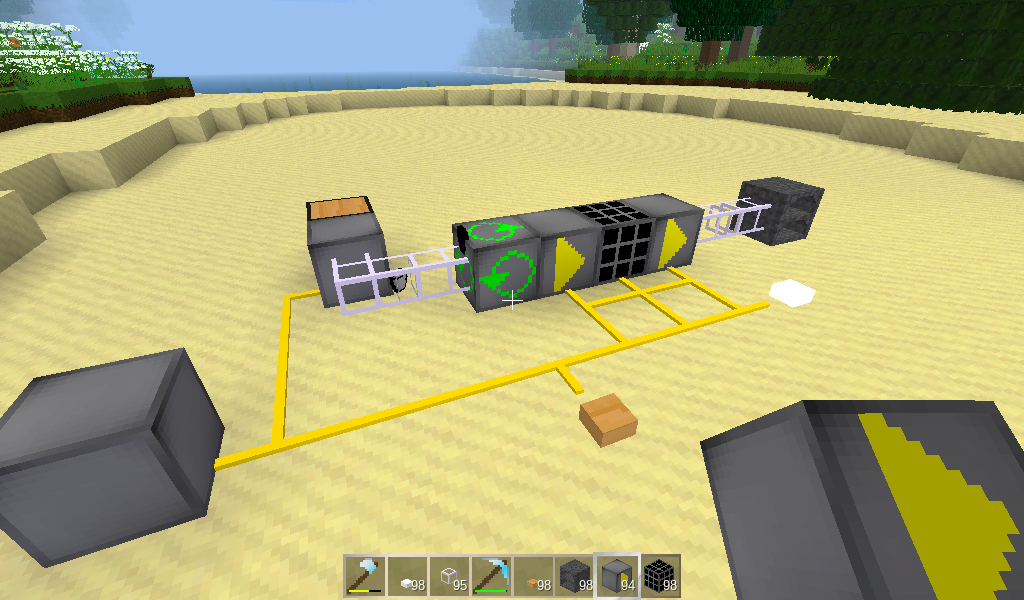 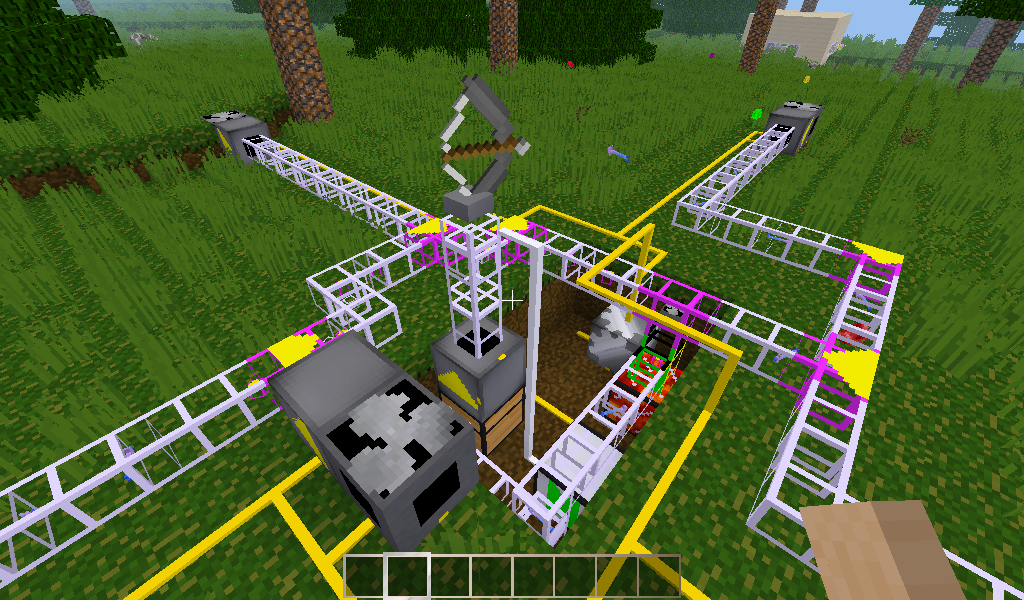 by AiTechEye
finnaly a way to get water, without have to hike long ways to find.
this simple wooden barrel collects rainwater, just place one and wait 30s, or leave it until it is reloaded (eg walk 50m away from it) and it is filled,

it works with bottles and punching/drinking by hand