> copying is not theft.
It can be theft, unfortunately. Shad puts it very well. I agree with him entirely.
My stuff: Projects - Mods - Website

Ow someone is gonna support Shad? Fine I support Wuzzy I'm all in with Wuzzy this time;
For me minetest and all its official projects *deserve* to be free, I don't want proprietary stuff lying around in ContentDB. If it was like an unoficial content database its okay, but we're talking about the official one!

First of all, I'll talk about copying here.

I'm totally against prohibiting copies, first of all if its educational content, there really isn't an excuse to prohibit it, you're trying to stop people from learning, obtaining information. Do you know who also did so? The feudal system. When printing became a thing they started prohibiting books that went against what they wanted, thus making the population not informated, welp, at least not legally informated.

Now if it's an opinion article or something that shows someone's point of view or ideas I think it's still okay copying, if you don't alter it. After all, the person who took time to write their ideas probably wants them to be known, so you're doing them a favor by copying, you're helping to spread their ideas.

About code, well, copying is totally ok for me, why writing code if no one is gonna benifit from it after all(unless you're the only one going to benefit, in this case there is no need to tell the world you did so). I just don't want someone to *alter* it if they're going to insert malwares, or, if the code is also made to show someone's point of view, maybe by downloading resources you wrote online then do not change the source where its downloading the texts, images or what so ever, you'd be misleading people by saying that someone's point of view is something different from what it actually is.

But about culture things aren't much different, I mean, cultural texts may have opinions of someone, so please don't change it or else you're misleading who reads it. About music, did you know that it is very likely that Mozart copied music from some composers and altered it(not 100% sure but it is likely, also probably copied from his own father)? What if someone just got there and said: Kid stop copying our stuff! Welp, Mozart learned a lot by copying other stuff, mainly stuff from his father, if someone stopped him from doing it he probably wouldn't be the genius he became and we wouldn't have his wonderful music. Also about text and histories, as https://www.gnu.org/philosophy/misinter ... right.html says:

gnu.org wrote:Shakespeare borrowed the plots of some of his plays from works others had published a few decades before, so if today's copyright law had been in effect, his plays would have been illegal.

Also, do you know Patreon? It makes a nice idea of earning money from your community a reality. Look Rousseau, a pianist who I admire a lot: https://www.patreon.com/rousseau 299 patreons! He got it under 10 months. Just think about it, the min value is 1 dollar, that's already 299 dollars per month, if we think that half of this people give 5 dollars, then he earns 900 dollars a month, and he is only starting. Also, look Stephen Malinowski(not sure if I wrote it right), he earns about 84 dollars per video he makes, he makes animations of music that allows us to understand its internal complexities in a beautiful way. He works full time on it, and see! Relying on community support.

What I want to say is: 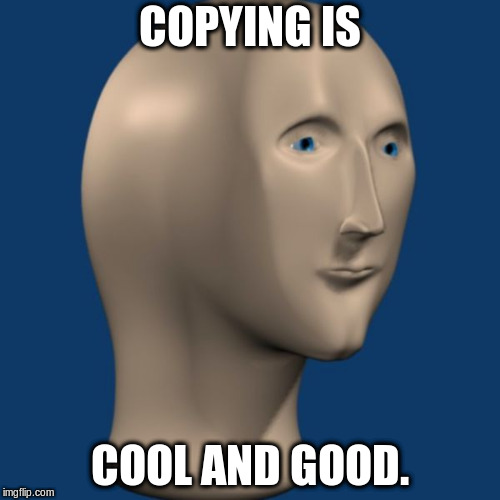 Disclaimer: This is not legal advice, just ideas, copying may be actually illegal in some cases but this law is all broken :P


+ Spoiler
Did you know that a lot of composers copied Paganini's themes? Rachmaninoff, Liszt(he rewrote entire paganini violin etudes to the piano and made them harder), Brahms and others(can't remember rn). Apparently Paganini was good at writing themes.

Chopin wrote a set of etudes dedicated to his friend Liszt. Liszt was so good at piano that he sight-read(read the sheet music without seeing it before) it all on the first time.

Just some classical music stuff, I love it :)
I don't have anything important to say.

What you say about Shakespeare and classical composers is all true of course. And I'd sort of like to go back to that system somehow, even though it will be a lot harder to make a living as an artist today because copying has become so very easy. Patreon sort of works right now (for some people). But even with stuff like patreon the current technological society will support *way* fewer artists on a pure capitalist system without restrictions on copying.

We should add universal basic income in the mix. And *then* abolish copyright. It might work and it's a nice thing to be idealistic about, but I don't really see it happening in the current climate.

But as it stands we have to work within the system as it exists.

And as I said: copyright is not all bad. Copyright law is what makes open source *stay* open source.

wziard wrote: Patreon sort of works right now (for some people). But even with stuff like patreon the current technological society will support *way* fewer artists on a pure capitalist system without restrictions on copying.

Just get skillshare or brilliant to sponsor you xD 1 in 10 youtubers are not sponsored by one of those :P
I don't have anything important to say.
Post Reply
79 posts