Talking about design is like talking about music. You will never suit to everyone's flavour. It is good as it is. Even old people like me, know where the mouse has to go to click and to get what you want to.
For people liking what ever colors or designs, a skin system would be probably best.
After all new design does not make minetest a better game. So this should be super low priority as there are enough and more important issues to fix. Starting with entities and many others more.
My servers: Jungle, Lilly in the valley click for my mods

I think instead of a "final fantasy " artstyle it should be a medical artstyle. lots of voxel technology was invented for medicine and MRI scans . minetest could pay homeage to its history (hospitals)

this is what I mean . you could say that this was the "minetest" of the 1980s. also skulls are cool and make the game feel more serious and "adult". more teenagers would get into it 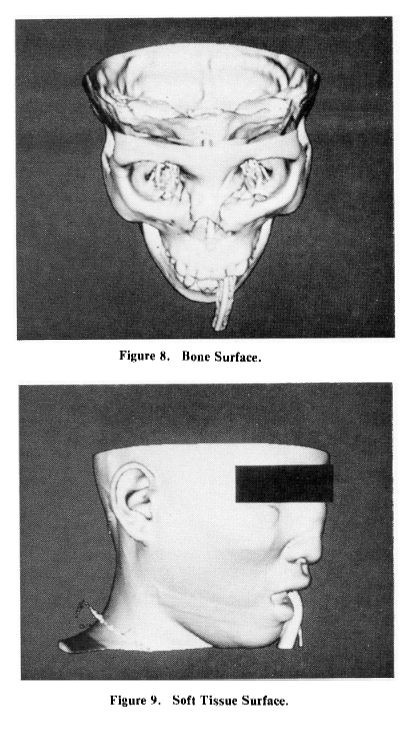 It's an investment. We could make the background burning fires, like a demoscene coder

I want someone to make a map that is just the inside of someones brain. maybe mine but I am afraid of radiation. I think you can get a "recreational" MRI if you are thrifty enough

A big problem I have with this approach is that usability needs a lot of work.

It's not enough if things look nice, it's also important that people can actually use it. The prettiest button is useless if it's cryptic / hard to understand. Therefore, I think usability absolutely needs to be taken into account on the redesign process.

As for the concrete designs: In generally, I think the pixel art indeed looks nice, but to be honest, I think it still feels a path in the wrong direction. I like your attempt to try to look nice while not being "too expressive" but I still … not sure about it.
However, I am not falling into the trap in saying that the main menu therefore must look in the most "neutral", bland-looking, boring possible way in order to not look "too specific like a game". I am 100% convinced the main menu should absolutely have a design. I also agree fully on the idea of a radical rework. Because what we have now … ugh. I won't miss it when the current trash is gone. XD

Now here's why I think pixel art might be mistaken: Not all games for Minetest are neccessarily in pixel style. There can be games with high-res textures, so for those the "pixely" style of the main menu will fall apart a bit. I am not sure if we can rule out smooth lines completely. But on the other hand, I'm probably just waffling around, maybe this does not matter that much in the end. You are right in that pixely games are still dominant. So I think pixel art might be fine after all. I guess I wait for the final result. It's a matter of opinion, ultimately.

There's another, more technical problem: Pixel fonts are great and all that, but unfortunately, you'd have to find a pixel font that supports a LOT of characters. Minetest wants to support UTF-8 and all that, after all. Especially with the "fancier" pixel fonts you quickly run into severe limitations in what characters you can use. This will suck for translations. I have yet to find a good pixel font w/ huge Unicode coverage. I think this also explains why Minetest has been stuck with DejaVu Sans for so long, simply because it supports a lot of glyphs. Anyway, I would love to see a discussion about font. The font is soooo important, I think.

I disapprove of the font in your 1st post specifically. This font is clearly "overdesigned" IMO because it reminds me of fantasy settings. And I don't think that's what you aim for. Right?

What I do like in the very first post is the use of cubes. I mean, it just makes sense. What is the ONE thing that "all" games for Minetest have in common? It's cubes! I feel like cubes are the perfect answer. xD
Anyway. I like the right version better because it's just simple flat colors. I don't think the ABC toy building blocks make a lot of sense in a Minetest context. As for simple colors: Good. But I think even trying to replicate common game blocks like grass blocks goes "too far". Why restrict only to those colors? I think any color could do as long it looks nice. It also feels a little inconsistent that 3 blocks are basically 1 color each while 1 block has 2 different colors.

I do like the simplicity of the menu. I think a simple list of menu options is the way to go. I mean, it really should be a no-brainer, it's a tried and tested for ages. Which entries to include in the main menu is subject to another debate, but I just leave it at that. The part which is more interesting IMO is not even the main menu but the design of ALL of the sub-menus. That's where the real fun begins.

The background of the main menu is an intresting idea. I mean, it's nice to finally have a background which is not just a solid color. But to be honest, even that might be too much "expression". What I mean with that is this already alludes to a certain type of game, namely games that play on "Earth" (blue sky and clouds), so it excludes games that play elsewhere and also abstract games. I might be a little bit too extreme in my "abstractism", however.
One idea might be something even more abstract, while still showing something. Maybe something which involves a lot of cubes? Maybe a pile of cubes, or falling cubes, or random rotating cubes, or whatever. No idea. Just something something cubes. Since cubes is the one thing that connects all games, so to say. ;-)
Or maybe go even more abstract than that … but I have no idea for that. I really feel like the engine design should not allude to strongly to any particular game, so abstraction could be a nice tool.
I am not saying the simple clouds you used are wrong. I probably would be perfectly fine if you pursue this cloud idea. I am just throwing out random ideas as possible alternatives.
But what I am 100% sure of that there needs to be some background design, otherwise it will be too boring.
(NOTE: I only wrote this paragraph since you specifically asked about my thoughts in your 1st post.)

I wonder, is your idea that the background is animated or something, or will it be static? Also, do you have ideas to include any 3D object in your design, or will it be strict 2D pixel art everywhere? 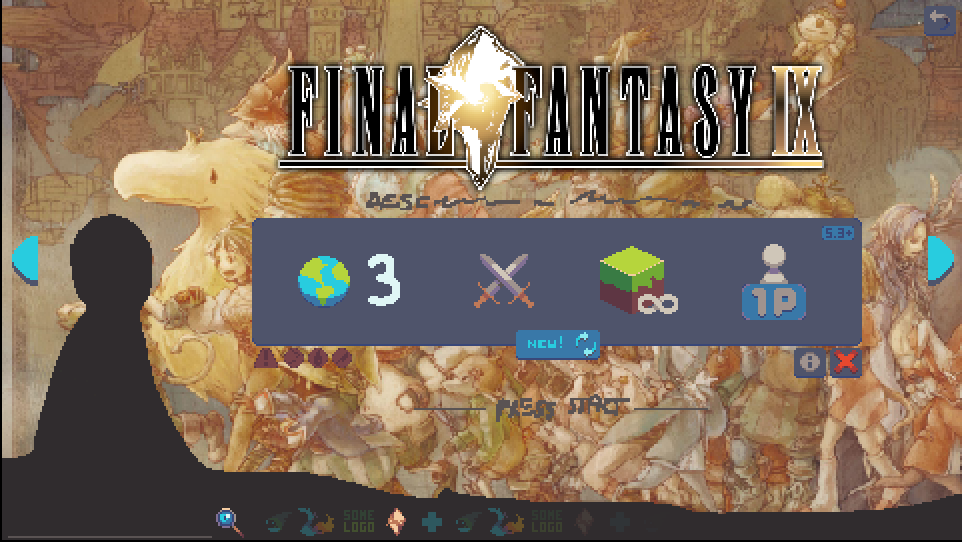 This image summarizes my main general problem perfectly.
Yes, it sure looks nice, but from the first glance, I have no idea what is going on on the screen. If you need to explan your interface, you lose. There's too much imagery for which the meaning needs to be guessed, and text is avoided for some reason. Let me state my opinion: There is nothing wrong with text! XD
The location of buttons makes no real sense to me. What I really don't like is the keeping of the awful "game button bar". I know for a FACT that the game button bar sucks, it is awful to use. The problem is that you only see icons without any labelling. And if you have lots of games installed, you tend to forget the game name. Or if you just installed a new game, you have to search the game forever. Anyway, this game button bar is probably the worst design sin in our current main menu, and a radical rework needs to kill it with fire.
The search button doesn't really help, it's still crap usability. Now you have to type for what should only be a single click.
I like that the "damage/creative" restriction is taken into account, but I don't like the rest about this screen, frankly.

The meaning of the left/right buttons as you described also does not make any sense to me. Overall, I think this design is just way too confusing, a lot of functionality needs to be guessed, which is not good.

And as for the world selection dialogoue. That's clearly better, but I steel feel it's not great. First of all, I think the contrast is great, I like vibrant colors. It feels like I'm in a game, and not in a gray buraucratic bland launcher program tool thingie.

Putting the buttons directly on the worlds is a nice idea, but oddly inconsistent. If the remove+config buttons are per-world, why not Creative and Damage as well? Because those 2 settings are, in fact, per-world as well. Only for the networking button it is defensible to keep it outside.

Again those weird left/right buttons. The cog reminds me of pansexuality for some reason. :D
And again there are unlabelled buttons all over again, something which someone else also noted already. I think as long the function is not super obvious, buttons should be text-based. A combination of image+text can also work.
Specifically, I think the strike-thru swords is very problematic. The icon is near-invisible under the strike-thru, which is bad usability. Also, swords suggest PvP, not damage. Maybe a heart is better? (this is also used currently in server list).

What is good is having an "add world" thing as part of the list. This is a nice simplification.

The "name/password" thing does not look "grayed out" when it is supposed to be grayed out. It still looks like you can click it. It might be smarter to just hide this widget entirely when it would be useless anyway.

The play button is huge, I don't understand why but … okay, I guess? The fonts are a big problem in your examples, many characters are TINY, which is bad if you want to go full Unicode (which we absolutely want in Minetest). I guess they are only placeholders?

Overall, that is, over all your designs, I am happy with the choice of colors and contast. This is a clear and major upgrade. I also like the simple, slightly "playful" use of elements while still not going into "details". I think the use of many "colorful colors" and the proper use of contrast alone is a big step forward. What clearly needs rework is the usability aspect, many aspects of your proposed menus are completely un-obvious. I think the main menu is mostly perfect, the game menu needs a complete rework (sorry), and the world menu is in principle OK, but it has issues in the details.

What I also feel lacking in your designs so far is any kind of "flowchart". I mean, a defition of what happens exactly when you press button X, and to which screen it leads to. Thats, like, super important. If you properly define that, you're also a big step forwards in having an actual menu.

But yes, it's clear you put a lot of thoughtwork into this, and you do have some great concepts at hand. But please take usability more into account. Not everything is obvious to everyone. In general, please keep up this thoughtwork, I think eventually something great can come out of this.
My creations. I gladly accept bitcoins: 17fsUywHxeMHKG41UFfu34F1rAxZcrVoqH
Post Reply
56 posts