3D meshes for players and creatures [Models are now upstream!]

3D meshes for players and creatures [Models are now upstream!]

by MirceaKitsune
I don't know what the plans are for player and mob graphics. But as Minetest advances, I believe using 2D sprites with pictures on them cannot stay an option. In my opinion, we'll eventually need real meshes for players and creatures alike (just like Minecraft).

Good news is that, if we choose to follow the same blocky style, meshes will be very low poly and easy to make. Since they would be made out of blocks, and not complex like objects in most 3D games.

The only modelling program I know is Blender. Generally, I'm barely able to model anything. But if we use a few simple blocks, I can easily put together such a mesh, and maybe texture and animate it too (though I'm not sure). I'd need to know some specifications however. Mostly how the animations and armatures should be done, and what model format Minetest would use. Keep in mind it would need to support multiple animations per model, as well as animation blending (so the model can bend when looking up and down for instance).

Any ideas or thoughts?
by MirceaKitsune
Well... having nothing else to do, I already started working on a Minecraft-like player mesh. Made it a bit more detailed than the one in MC though (limbs divided in two sections and the head has a neck). [EDIT] Made the limbs a little larger, and added hands and feet (15 blocks in total). You can download the .blend file HERE. Blender can export in .md2, format supported by Irrlicht. In this case, the animation must be made by Shape Key.
by SachielMF
For me, as soon as the models cross a certain threshold of detail, they suddenly become not detailed enough anymore or simply unfitting. If the design itself is good enough, it might compensate that, don't know if anyone is up for the task, though. Worst thing to have is an overall incoherent appearance, imo.
Then again, maybe I'm just too much of a perfectionist. Sometimes it's better to have a start and work from there instead of getting nothing done because you think the outcome wouldn't be good anyway.
by Evrim
You should check out Neverdaunt 8bit, you may get some inspiration from there

Also 2nd picture w/o hand parts would look great
by adampajor
I it's needed, I can make 3D models that would fit into the game's style, both mobs. player models, minecarts, boats, etc.

by Karlas
3D is just not for this game,
by adampajor

Karlas wrote:3D is just not for this game,

I think it is, like in Minecraft. only cuboid things, nothing more. It fits for games like this. Low poly, low res textures, as simple as it is possible. I was thinking in that.
by Karlas
well ok 3D players and mobs...and minecarts....and....
by parlock
I was just thinking the same thing. We need 3D block players in the game.

by hmmm
I think 3d meshes is a good idea (along with sound and animations). But I'm not so sure about making the player blocky like Minecraft does.
by Dogers
In my opinion , Minetest goal is the low-end machines . In this way I think that will be preferable to do not implement 3D mesh for players and creatures , only sprites , just like Infiniminer .
by kddekadenz
Well, the meshes would be very low-poly, so they should work on low-end machines, too.
by Dogers
Indeed , but what consequences in town with lots of players ?
by kddekadenz
I've found some free to use meshes at turbosquid, which are minecraft-related (click on the pics ): 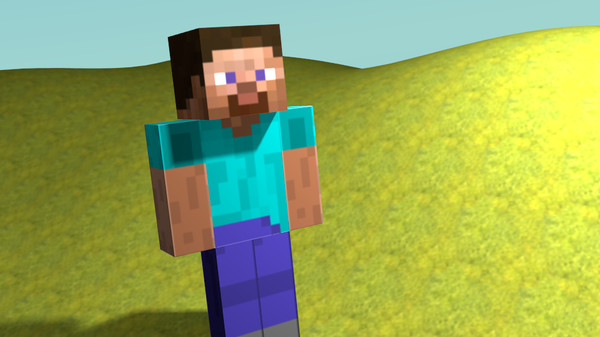 This one may be also useful:

Dogers wrote:Indeed , but what consequences in town with lots of players ?

Actually not Much, sure if you have loads in a single area but that's a dumb idea All together any-ways.

With a viewing Distance added to these model (As currently player sprite + name have none) there shouldn't be any performance decrease.

How ever the actual effects of models being used are hard to state without actually testing Models any-ways.
by Staffs
Okay but is here anyone who can rly make the character move like is here anyone who rly understands blender ?
by No-Half-Measures
Well @MirceaKitsune does but seems he's gone MIA =/

I have some experience with it but not enough.
by abcd_z
Looks like ghostshell is working on 3d meshes. Check out the patchsets page for more information.
by jordan4ibanez
dude this is going to be great!!
by MirceaKitsune
I'm still around, just haven't been as active lately. Well my suggestion is going for low poly meshes like MineCraft does. In this case, it should be all good. I'm not good at animating however, so I don't think I will continue the mesh I posted in this topic personally.

But I'd still like to see 3D players + mobs in MineTest

Last I remember though, celeron55 said he wanted sprite players like Infiniminer, so that depends if he's changed his mind on that or not.
by MirceaKitsune
Been a while since this was last discussed. Still very interested in this feature, and was wondering if there's any news (like what model formats and approaches will be used). Especially now that you can make your own games with LUA, I'd really love to see the ability to add rigged meshes from a Blender compatible format.

I plan to make my own games with MineTest at some point. And one awesome thing would be if not only players and mobs could be models (with animations you can trigger from LUA, maybe even animation blending). But also if items could be 3D meshes optionally. Imagine people replacing the torch with a high-poly lamp in their games, or using high poly models for tools like the sword and pickaxe (of course not in the default MineTest game, I'm talking about custom ones).

Anyone given more thought to this, and is there any progress on it? I imagine Irrlicht already comes with the ability to render 3D models, so that probably just needs a LUA hook or something to allow using it in MineTest.
by slasheree
Check this: http://minetest.net/forum/viewtopic.php?id=1594
by MirceaKitsune
Thanks for the link. I'm glad some awesome models were already made