In minecraft, redstone dust can be placed on pistons, but it pops off when the pistons are activated. This behavior is not in mineclone. 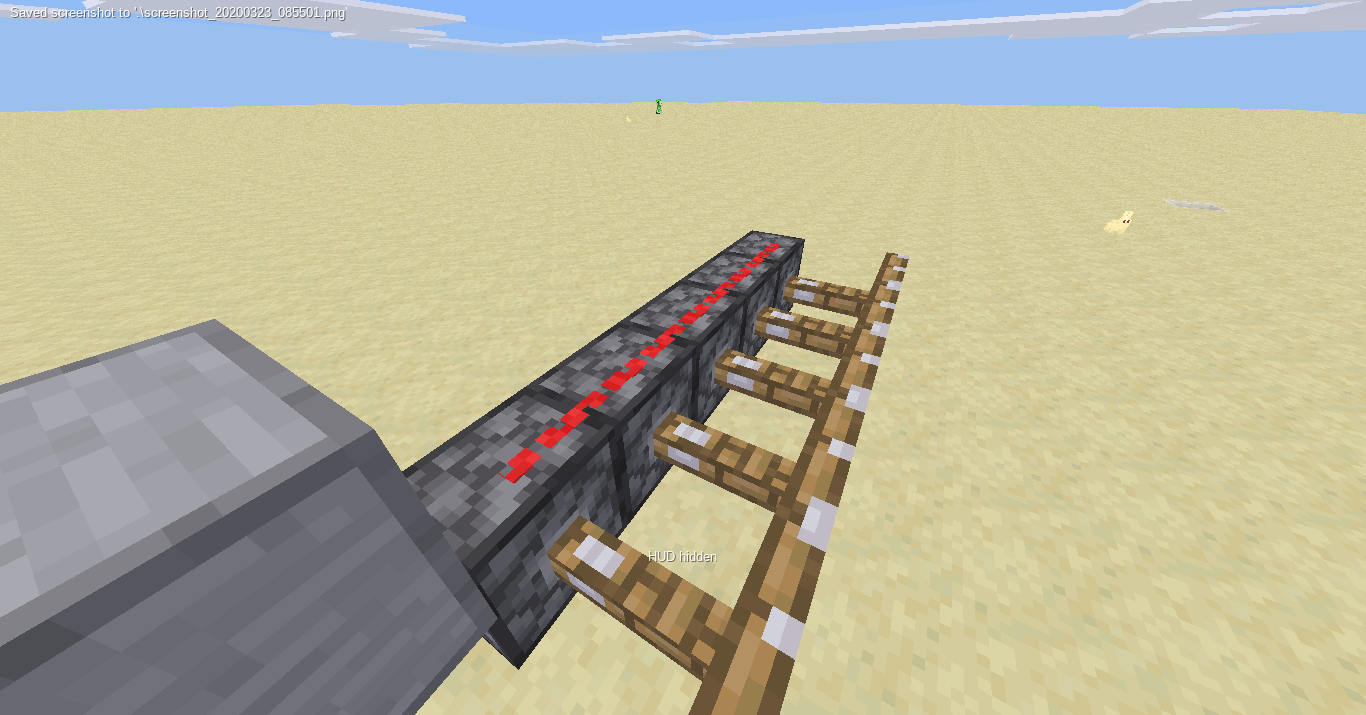 Wow, there are villagers in the game? :O How functional are they?

Thanks a lot for the tooltips! :D 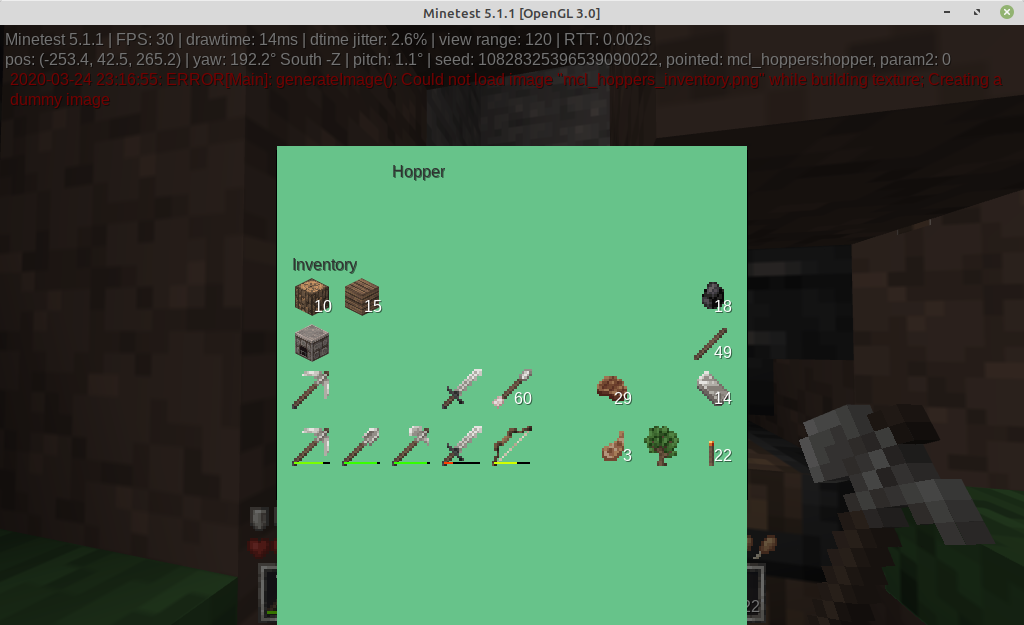 2. The furnace
Please note that the visual bug corrected itself about 1-2 seconds after I placed coal in the furnace. I even quit the game and started a new session and it looks normal, but I can't explain the generateImage() error. 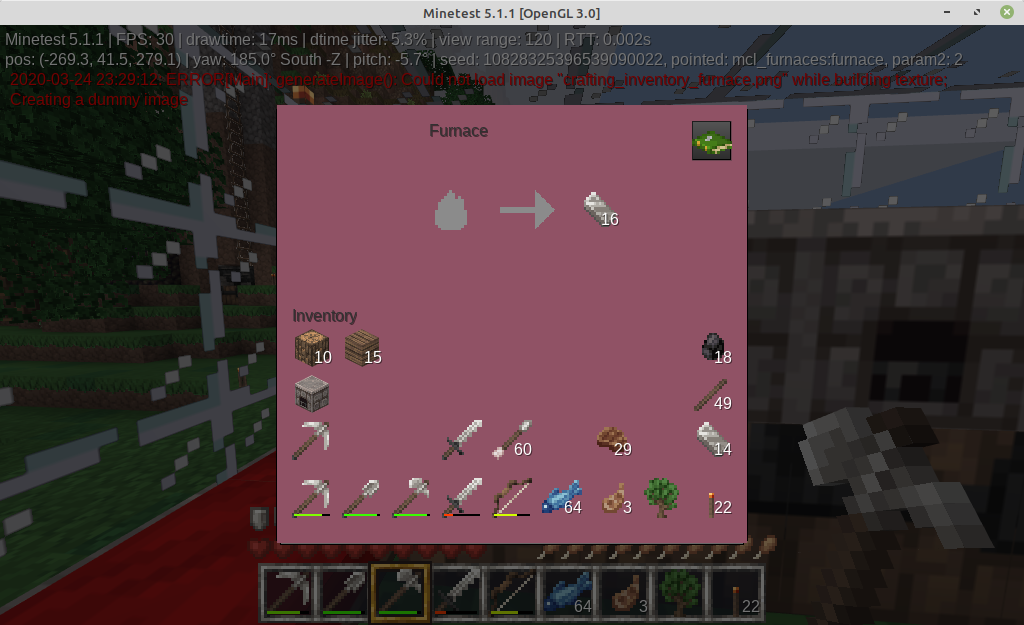 3. The anvil
One image, two bugs. I tried using the anvil, as I did with the furnace, but the image doesn't correct the same. Also, it looks like it accepts anything in its slots, not just the repairable items. 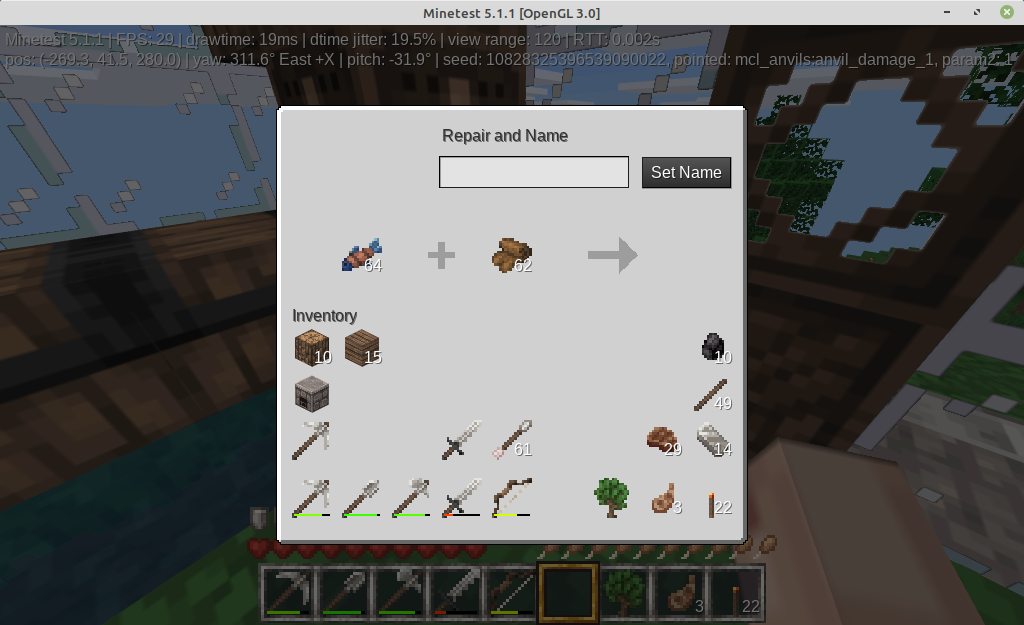 I'm afraid you have to demolish and re-place the offending nodes.

It is correct that you can place all items into anvil. This is by design. It's for giving a name to items.
My creations. I gladly accept bitcoins: 17fsUywHxeMHKG41UFfu34F1rAxZcrVoqH

But why would you name food? :P I didn't try this in Minecraft, but it's weird.

Nicu wrote:But why would you name food? :P I didn't try this in Minecraft, but it's weird.

In multiplayer you can rename food to put things like "juan meat" etc.

Just picked up this game again recently for the first time since 0.48-ish. It's a pretty great game, and not merely because it is cloning elements of MC. Wuzzy does some cool games.

A thing i noticed: Glass doesn't drop itself when mined. I fixed that by commenting out drop = "" lines.

The other thing is ghasts in the nether. Line-of-sight in the API seems to mean nothing with them, tracking the player very long ways deep into netherrack tunnels. The blast radius of their fireballs in netherrack seems to far exceed 3. The fireballs also should not be able to destroy cobble.

I know that this is an alpha WIP, and also how many times it has been said that mobs need a lot of work. I also hate asking questions, but is there any way to modify some of these behaviors? It's past the limit of my understanding of how to muck about with the lua files, and what i have looked at seems to indicate that some of these things shouldn't even be happening. I don't recall it being this severe in 0.48-ish. I have a nether portal just floating in mid-air now, which used to be buried deep in a hillside. Creepers don't even do as much damage, and their boom should be more powerful than a ghast's. (Also, magma cubes seem to deal damage through several layers of netherrack or cobble, but whatever.)

But if someone could point me in the right direction as to why ghast's can see through netherrack (they shouldn't be able to see through any solid block, including glass), or at least reduce the blast damage without just nerfing their detection range or blast radius, that would be cool, thanks.

Oh, thanks. It used to work, and i did not know that. However, no silk touch tools exist/work in MCL2 as of yet, and honestly, that qualification seems rather pointless to me. Good to know how MC does it though, thanks for the info!

Hey Wuzzy I modified the diamond texture in GIMP:

diamond.png
(751 Bytes) Not downloaded yet

I like to make mods :D
I also made a patreon!

Jesus Is Lord and Savior!!!

Hey Wuzzy, I get this error, if i try to start a singleplayer world:

It looks like a mod folder is missing. I have moved a couple of mods in past versions, it could be that one of your update didn't take this into account. If you install MCL2 from a Zip file over an existing installation, stuff like this can happen. It's generally a bad idea to extract Zip files over existing installations because that way, whenever I deleted a file or moved it, you won't get this information.

How to fix this: Remove the game folder of MineClone 2 (mineclone2) completely, then re-install MineClone 2. In future, I recommend to install MCL2 through the "Content" tab in Minetest. If you already used the Content tab, then congratulations! You might have found a bug in Minetest! :D

---------------
And I will soonish release a version with the formspec weirdness being fixed. (I wish that static node formspecs would be a thing (https://github.com/minetest/minetest/issues/7001).)

English, please (so others can read).
My creations. I gladly accept bitcoins: 17fsUywHxeMHKG41UFfu34F1rAxZcrVoqH

I had trouble a little ways back with creatures being absolutely immune to TNT. Is this fixed?
May God be with you, always.

Are you aware that the mobs constantly crash when using 5.2.0-dev?

The engine change that caused this has been discussed here.
Mobs Redo has been fixed in the meantime, pulling in the latest changes from there will fix the crashes.
Mods: Mesecons | WorldEdit | Nuke & Minetest builds for Windows (32-bit & 64-bit)

No, mobs are still explosion-proof (I didn't know about this), but it seems quite tricky to fix.

Thanks, sfan5, for the heads-up. I have noticed the crashes, too, but I ignored them as it's -dev (which I do NOT support). Anyway, now that I know the cause, I have committed the required changes.

Well, maybe it would be the best to just nuke the horrible mobs API and start over … There's just so much wrong with it, and almost all major bugs I had in the past are thanks to the mobs API. But it would be a lot of work.
My creations. I gladly accept bitcoins: 17fsUywHxeMHKG41UFfu34F1rAxZcrVoqH

could someone let me know if that should change? thanks ^^
My YouTube-Site with Minetest-LetsPlays and some of my Servers: Carpathian Ethereal Vanilla Creative MineClone2

It is and always has been policy that I only officially support latest stable Minetest version. Currently, that's 5.1.1.
My creations. I gladly accept bitcoins: 17fsUywHxeMHKG41UFfu34F1rAxZcrVoqH

what could mean 2 things:
* you start updating or fixing it AFTER 5.2 is released, as only then you can be sure no changes in mt might counter-fight your fixes may have done before (=getting useless, lost work)
* (hidden)
Human has no future (climate change)
If urgend, you find me in Roblox (as CNXThomas)

You missed one check from this commit.

I don't think that's a very clever strategy, almost all changes will stay until the release happens.
Which means you are you just delaying the work required for the new version.


Edit: Unrelated, but considering how mature MCL2 is, don't you want it to be moved to the "Game Releases" forum?
Mods: Mesecons | WorldEdit | Nuke & Minetest builds for Windows (32-bit & 64-bit)

Development releases tend to have incomplete and/or buggy features. That's why it makes perfect sense not to rely on those releases for game releases like MineClone2, because it would only constantly increase the workload for two versions: last-stable and -dev.

The only real question is:
How fast can the necessary changes be performed so that MineClone2 can work with a newer Minetest release?

I for one am fine with waiting for a few days, maybe even weeks if necessary.

P.S. And I agree MC2 could very well be in the "Game Releases" forum, as it's been very well rounded for quite a while. :)

I will not depend on or officially support bleeding edge, period. Several reasons:

- It is simply much less stress to me. Stable is called “stable” for a reason. Depending on bleeding edge basically means I will waste time by chasing a moving target, and this is stressful to me. It's MUCH safer for me if I just care about latest stable, I can actually focus on development and don't have to figure out why feature X in -dev suddenly broke …
- It might be true that most changes that make it in, stay in, but it's NOT true that they also will never be touched again once they have been committed. People start finding bugs or, even more important, design flaws when they actually testing it in -dev, so changes happen. I mean, it's -dev, breaking changes are to be expected
- I cannot depend on most -dev features without also losing compability with latest stable, that's a no-no. By losing compability with stable, I will exclude a large chunk of the playerbase. I think it would be quite rude to players to expect them to be constantly on the bleeding edge, only to play my game. You have to be a programmer or power user to be even able to do this anyway. (OK, maybe there is still a way to make everyone happy, with lots of annoying compability checks, yadda yadda but this is just a lot of boring and ultimately unproductive work that is irrelevant once the release is out)
- I am quick in updating MCL2 after a new Minetest release has appeared. Even after the major MT release 5.0.0, it only took me ca. 3 days.

MCL2 is still officially in alpha, so obviously this ain't for Game Releases. This means it is not feature complete. Not even close. It also means it has many, many bugs. Especially mobs. https://git.minetest.land/Wuzzy/MineClo ... assignee=0. MCL2 might be old, but it is NOT mature. I'm sorry for crushing your dreams.
Yes, MCL2 has tons of fancy features, but it also has tons of fancy bugs. :D

It's also a bit about myself. It is against my work ethic to release a software with many KNOWN high-importance, high-impact bugs as “stable”.

I hope you understand.
My creations. I gladly accept bitcoins: 17fsUywHxeMHKG41UFfu34F1rAxZcrVoqH

Furnace formspec is still doing that thing when active, where the visual output slot drops down one space but the actual output appears above it where expected.
Post Reply
2258 posts