Host it on github too (if possible).

Yes. I will fork minetest_game, and figure out some sub-module/branching scheme. I'm still deciding whether to host individual repos for my mods (shop, backpacks, etc.) and sub-module, or just branch minetest_game with them incorporated. I figure this will all be done within the next few days. Thanks.
https://youtu.be/BlXk48hZbc0

Will update the original post with a 0.01 zip later. https://github.com/jastevenson303/dcbl/tree/dcbl
https://youtu.be/BlXk48hZbc0

everamzah? welcome back, if so.

This is a nice selection of mods that with some polishing would be pretty much the way I'd like to see an official minetest game to be.

My only criticism is that unless you are making significant changes to the default MTG mods it might be better off being distributed as a modpack rather than a game. This would save you a lot of maintenance, see dreambuilder & carbone for example.

Good luck with the project either way and sorry if you are not everamzah ;-)

Hi stu! :D Yes, that's me, but I don't use the name much anymore. Thanks for the kind words!

I keep reminding myself of the fate of dreambuilder and carbone, but they're pretty good fates so I don't mind. If it looks like it'll be better as a modpack down the road, then I'll do it.

In addition to a lot of polish, and balancing, I have to look and see why the capes aren't applying. Is this because of the changes to multiskin? Thank you for clothing and armor! ;)
https://youtu.be/BlXk48hZbc0 I've been playing singleplayer a bit (AKA 0.5.0), and realize now that the emerald warpstone was quite useful when there were ten players all thwapping me with swords, but not so useful against mob attacks. I'll take this quiet night to continue my work on warps mod.

It's a fork of sofar's excellent warps mod, and features five colors corresponding to caverealm's glow ores: Ruby, Emerald, Amethyst, Crystal, Mese. So far, the Mese (yellow) warpstone sets a location to warp to when right-clicked, that can be returned to with /checkpoint or by swinging the Mese warpstone. This is a rip of checkpoint mod, which originally used two items: one to place as warp destination, and another to use to teleport there. These items were not originally craftable, per Dragonop's design. I'm not sure how to rectify this yet, and may come last.

The Amethyst (purple) warpstone is still the same original warps mod warpstone. The Emerald (green) warpstone protects against player attacks when held (wielded). I will make it so this also protects in a small radius when placed as a node, and also fix it so it works against mob attacks too.

Crystal and Ruby currently are inactive, but I plan to make Crystal (blue) as a personal private/shared (toggled with default:skeleton_key?) teleporter, which replaces the db/teleport mods from the original dcb sub-game. Not sure what I'll use the Ruby (red) warpstone for, yet.

After that, I'll investigate new changes to zoom/radar/map, which require in-game items. This suits dcbl perfectly, and it will add to the incentive to not die. Some bonus for staying alive for a number of /days might also be interesting. (Perhaps lowering bones decay time from 20 minutes to just a few (two? 90 seconds?) such that node_invetory_drops and items may be lost, would also add incentive to staying alive.)
https://youtu.be/BlXk48hZbc0

Sorry for the number of posts. I wanted to update that I'd added a TODO: https://github.com/jastevenson303/dcbl/blob/dcbl/TODO

Some updates: I mostly just wanted to share this screenshot of these compressed cobble nodes: 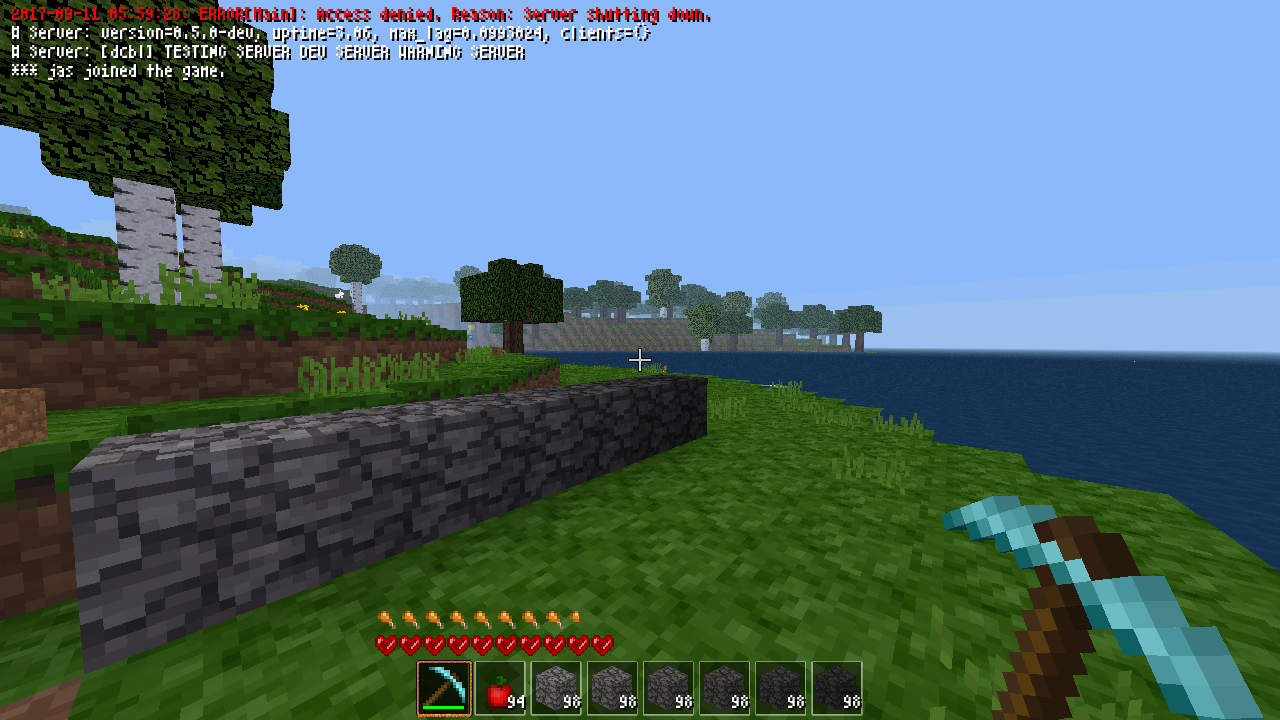 Players now have an inventory attached to the beds, akin to the enderchest. There are Set Home, Sleep, and Set Respawn buttons. Right now only setting home and respawn are protected. In which case, one would need to add another to their protection in order for them to use these two buttons.

I'll likely make it either protected, or not, with the use of a skeleton key. 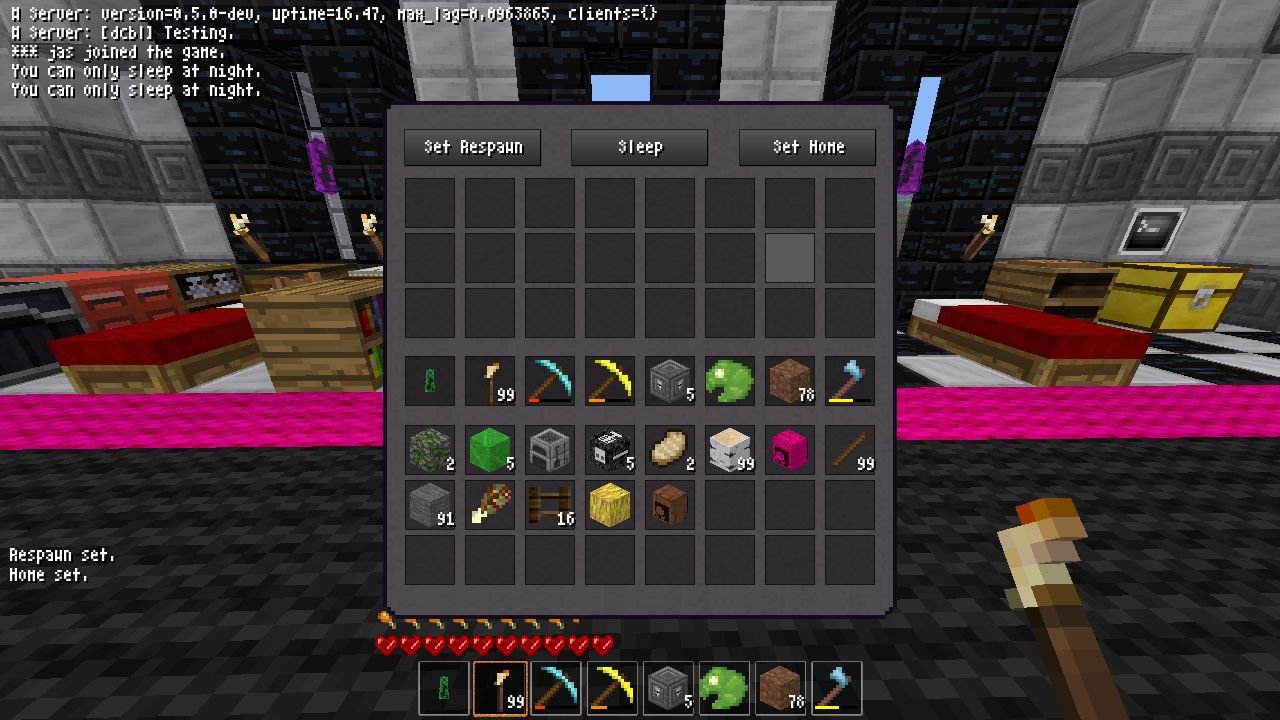 will look at ther server when 0.5 will be out. UI looks particularly consistent.
ＯＭＩＣＲＯＮ - pre-release 0.7 "Tweaky Update"

Cool. It's getting there; still have to revise the loom's UI, some nodes still show faded background (enchantment table), infotext on lockable/interactable items -- and I'll be adding more dialogs to interact with, which makes me think: I shouldn't use blank `field[]'s on formspecs, wherever possible such that plain black dialogs (textbox + "Proceed" button) show the custom background image.

Best I can do for now. 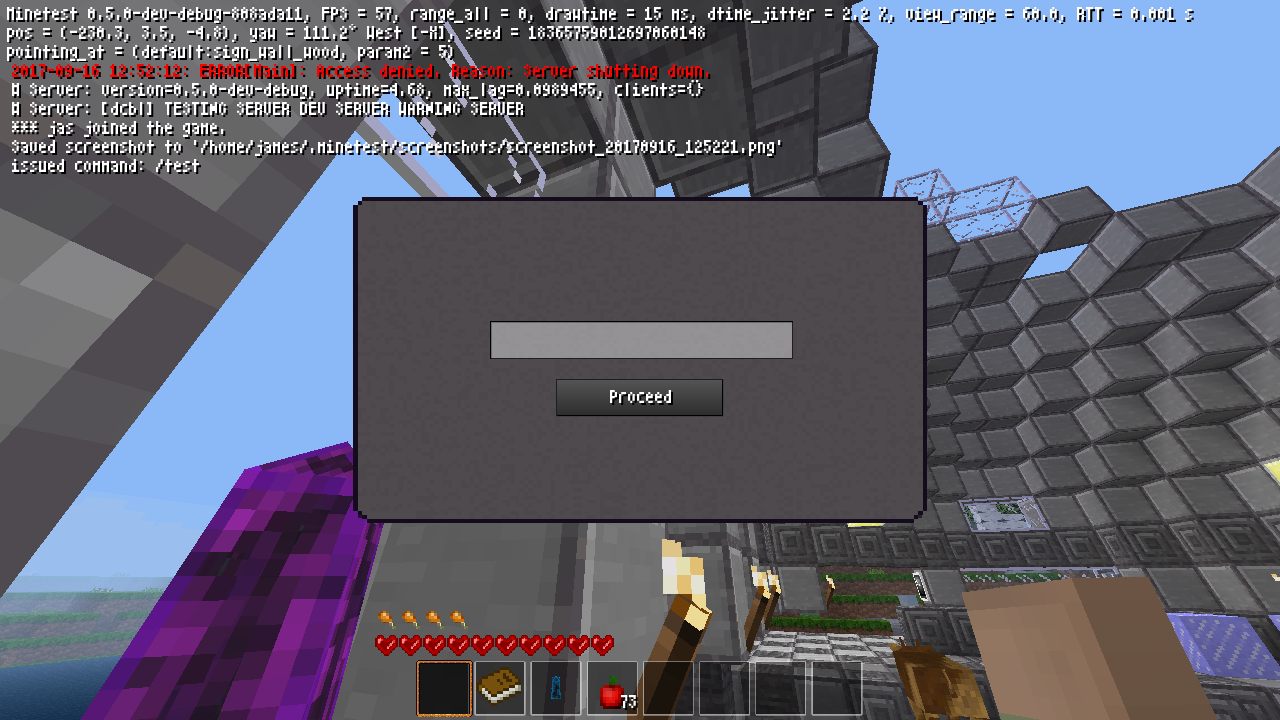 gui_formbg_short.png
(1.43 KiB) Not downloaded yet Alright! I just made it so Crystal (blue) warpstone shows warps management UI when you swing it, and the Amethyst (purple) one is the regular warpstone, anyone can use to set and warp to their destination of choice.

I also realized that I didn't have any Amethyst Glow Ores*, haven't gotten that far I guess, so I made it so you can warp from the walkie/intercomm. Here's a video demonstrating: https://youtu.be/fN-6fd7cTxE

So now warpstones are used by any player, and only admin can do /setwarp /delwarp as usual (and /warp). Anyone can do /listwarps. Anyone can set their amethyst warpstone to a public warp (set by admin with /setwarp name) or their own private one (set with the crystal warpstone.)
https://youtu.be/BlXk48hZbc0

Added preliminary XP. You get one point for initial join, and one point for each time you fell a mob. Stats can be checked with /stats <xp>.
dcbl_default/stats.lua
didn't mean to remove this last empty line, thought I'd undone it. :)
https://youtu.be/BlXk48hZbc0

Players now have a "dob" stat, their date of birth, which is set to the current world's day count when they first join. Subsequently, there's now an "age" stat, which is the number of days minus date of birth. This number doesn't reset when you die, unlike "xp".

Started a wiki on GitHub: https://github.com/jastevenson303/dcbl/wiki -- It's pretty fun. Now I just need to be able to render markdown pages locally.

I did add books and backpacks filters to the mailbox, also: 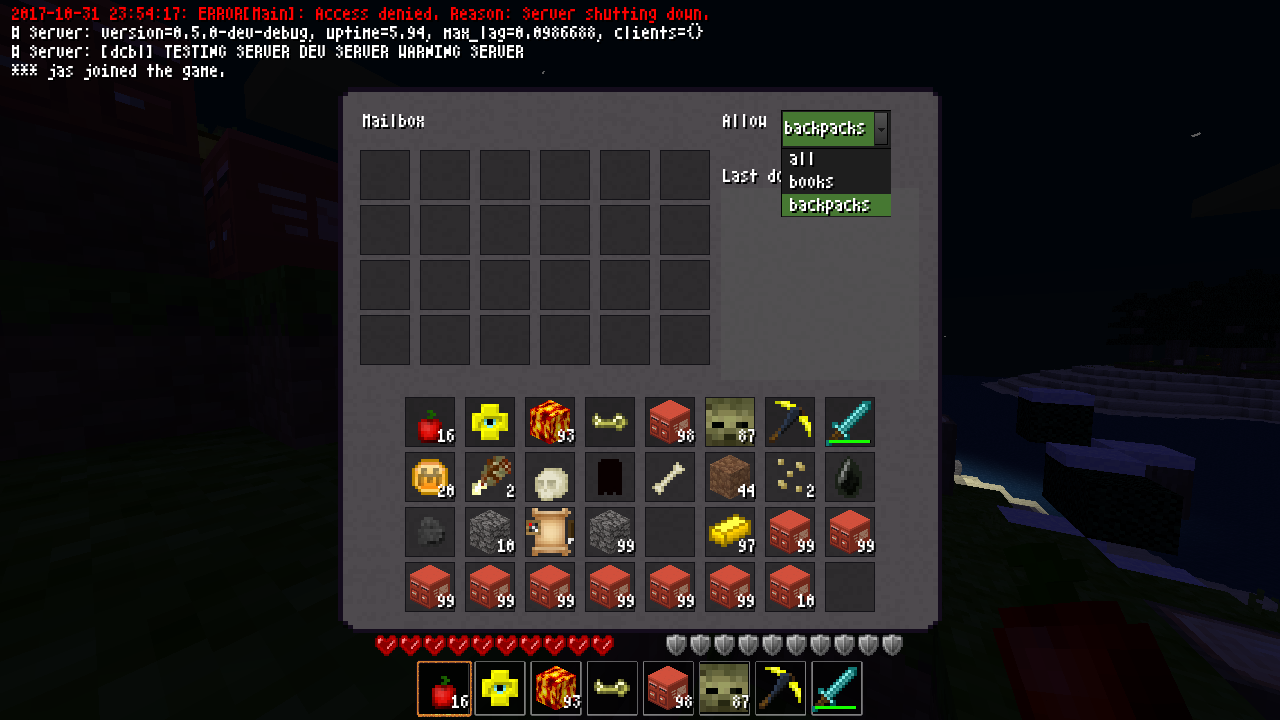 I'm going to tidy up the alignment, there.

Shops were updated to fix new page creation/deletion, which is automatically done with the Previous and Next buttons. A small addition is an xdecor:stone_rune+default:mese_crystal recipe to yield a protector node. Mese crystals now damage players, and are no longer walkable. There may have been some other additions/changes I'm forgetting, but haven't worked too heavily on this as of late.

Changes from minetest_game were merged in, though, and include kelp, and new snow sounds, and dungeon loot as well as other changes.