Voxelgarden II is a game I forked off of Voxelgarden (Duh!) and added on to. At first, I had a definite direction I wanted this game to go, but I dumped it because I realized that it would provide less gameplay than Minetest Game. So instead, I added features that I personally like and tried to integrate them in as well as possible.

I don't expect anyone to post anything, as this is just another random game. I just created this because I wanted something that I liked. Like Casimir said in the Voxelgarden thread: "It is nothing special, it is just a basic voxel game done different."

+ Spoiler
Warning! The weather mod uses high amounts of entities! It will slow down older/slower systems a lot. Delete this mod if you're having any trouble.

Besides these additions, I updated outdated things in Voxelgarden, such as the old inventory (Replaced with sfinv, but keeps a similar inventory layout), A bad crafting guide (Replaced with JP's, uses the layout of the inventory), the screwdriver, and farming. I also replaced stairsplus with the default stairs. They include inner and outer corners as well.
+ Spoiler 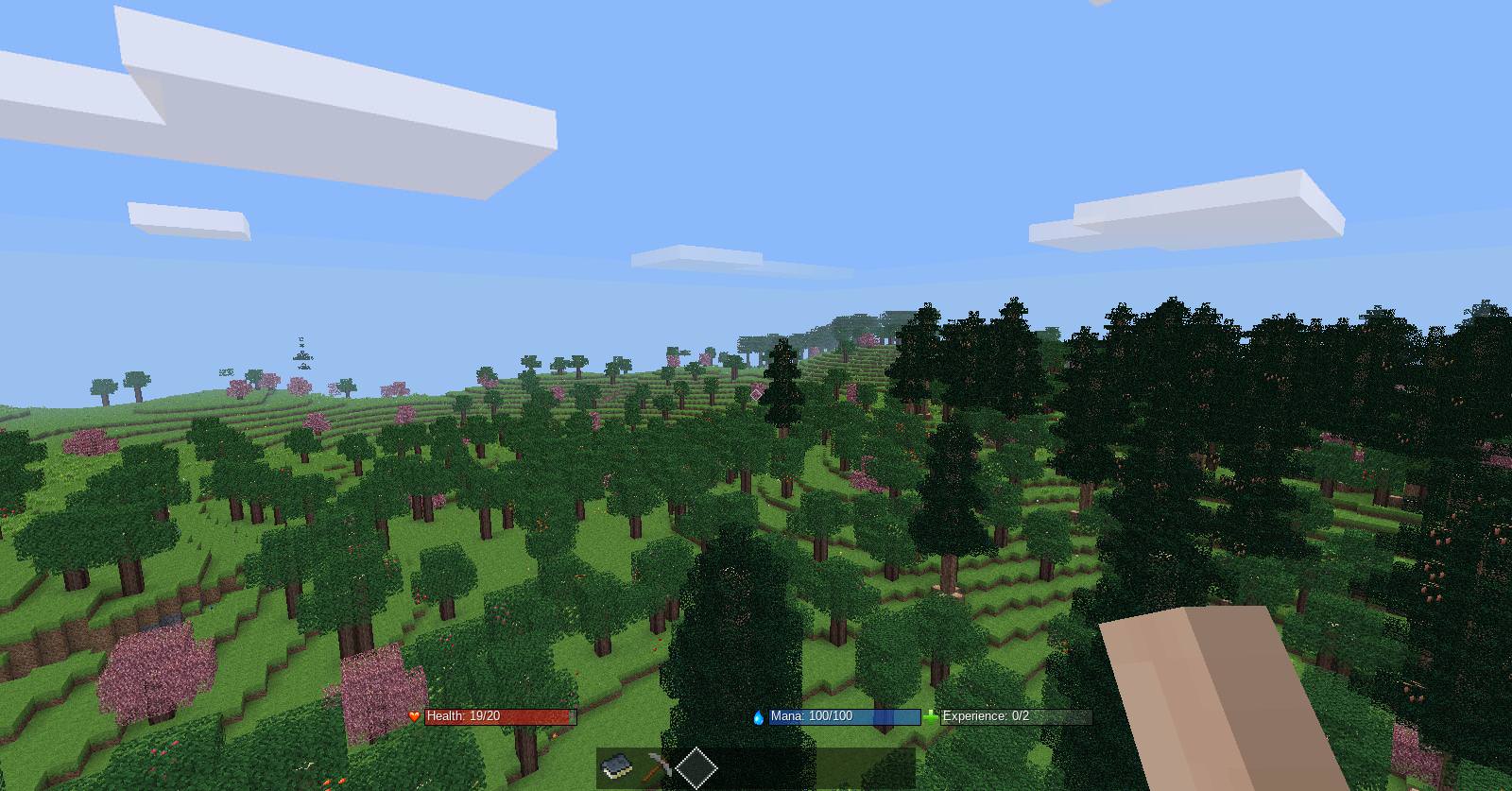 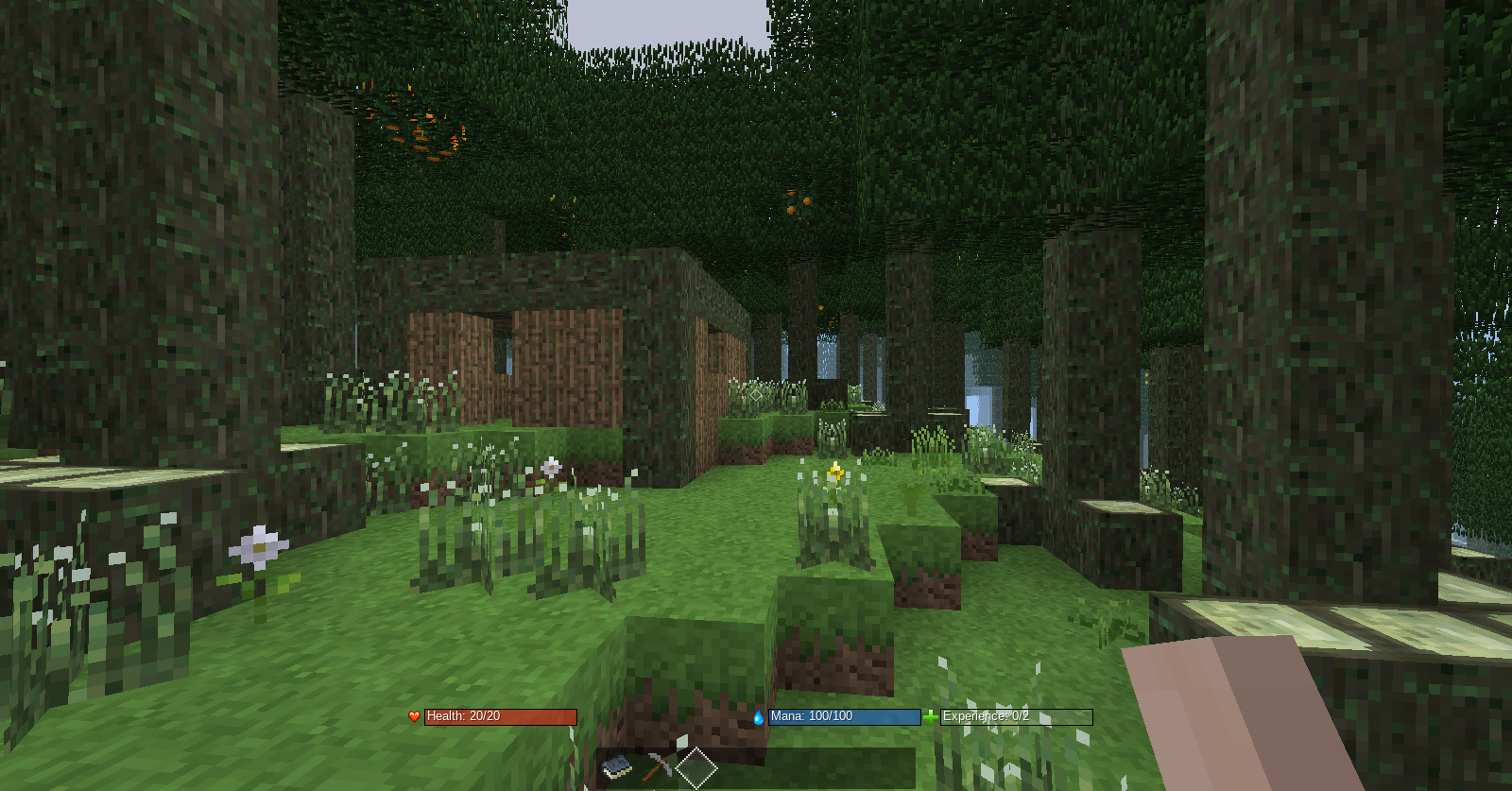 A hut in a jungle 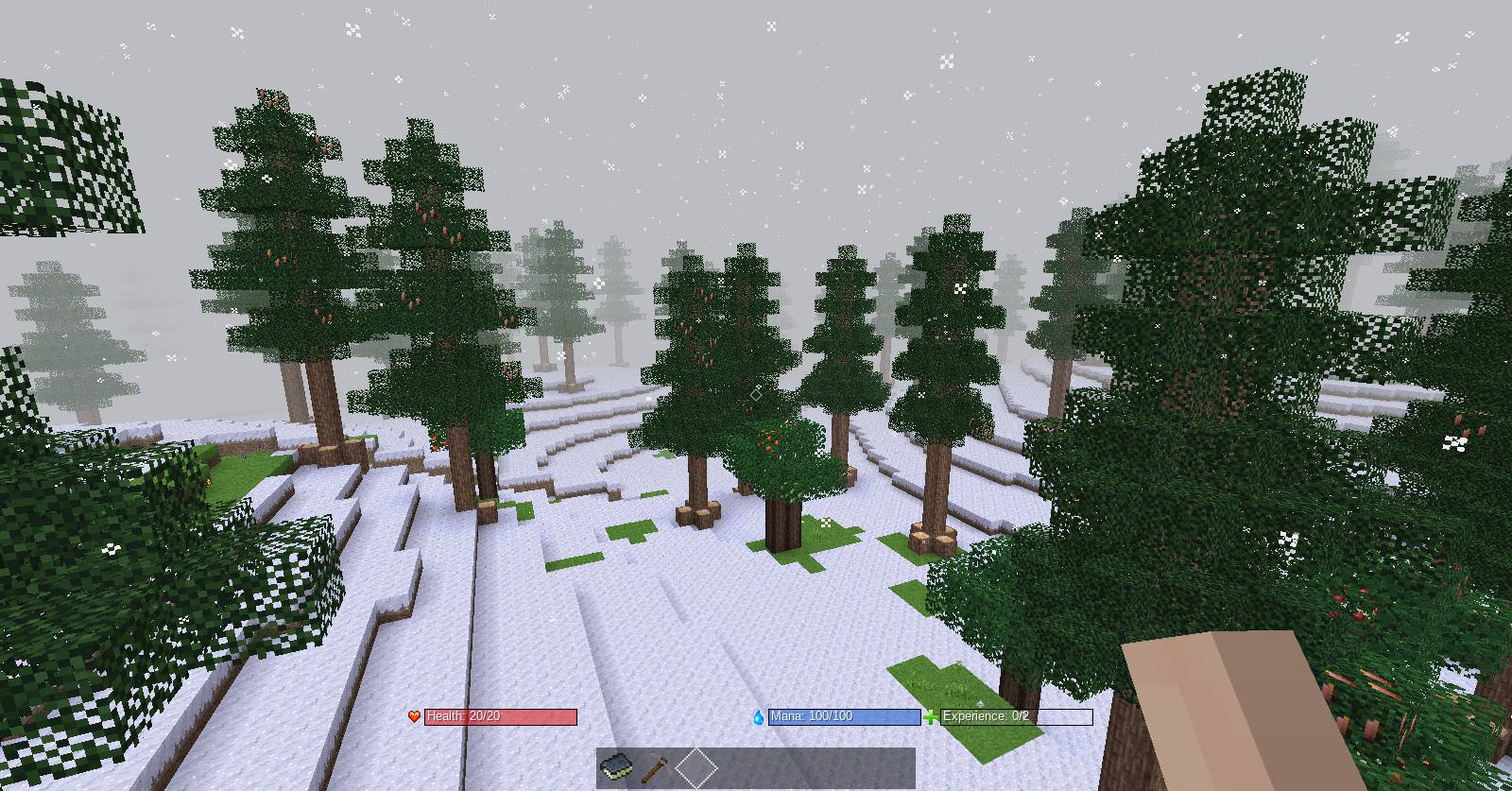 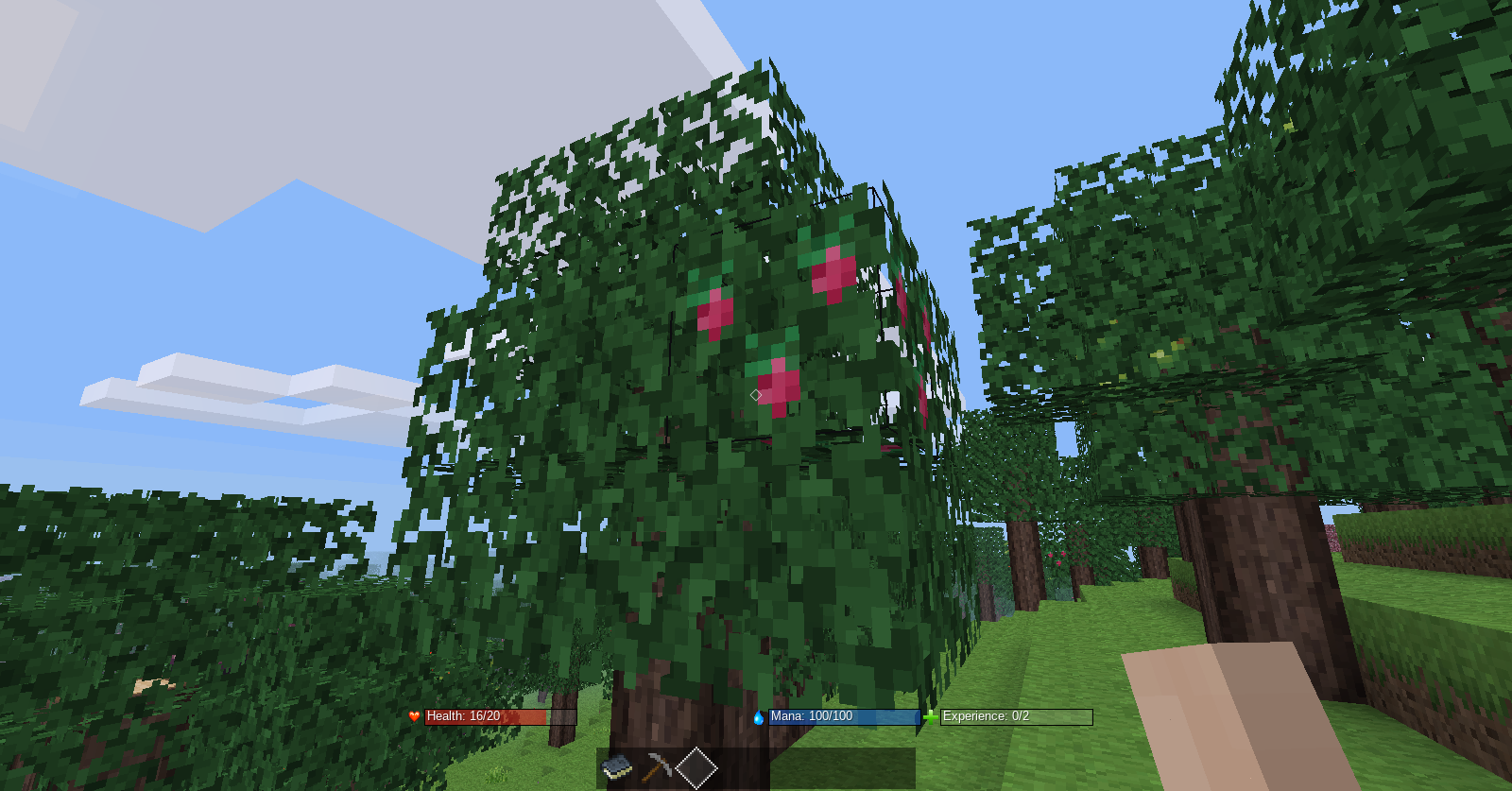 Of course berries grow on trees... 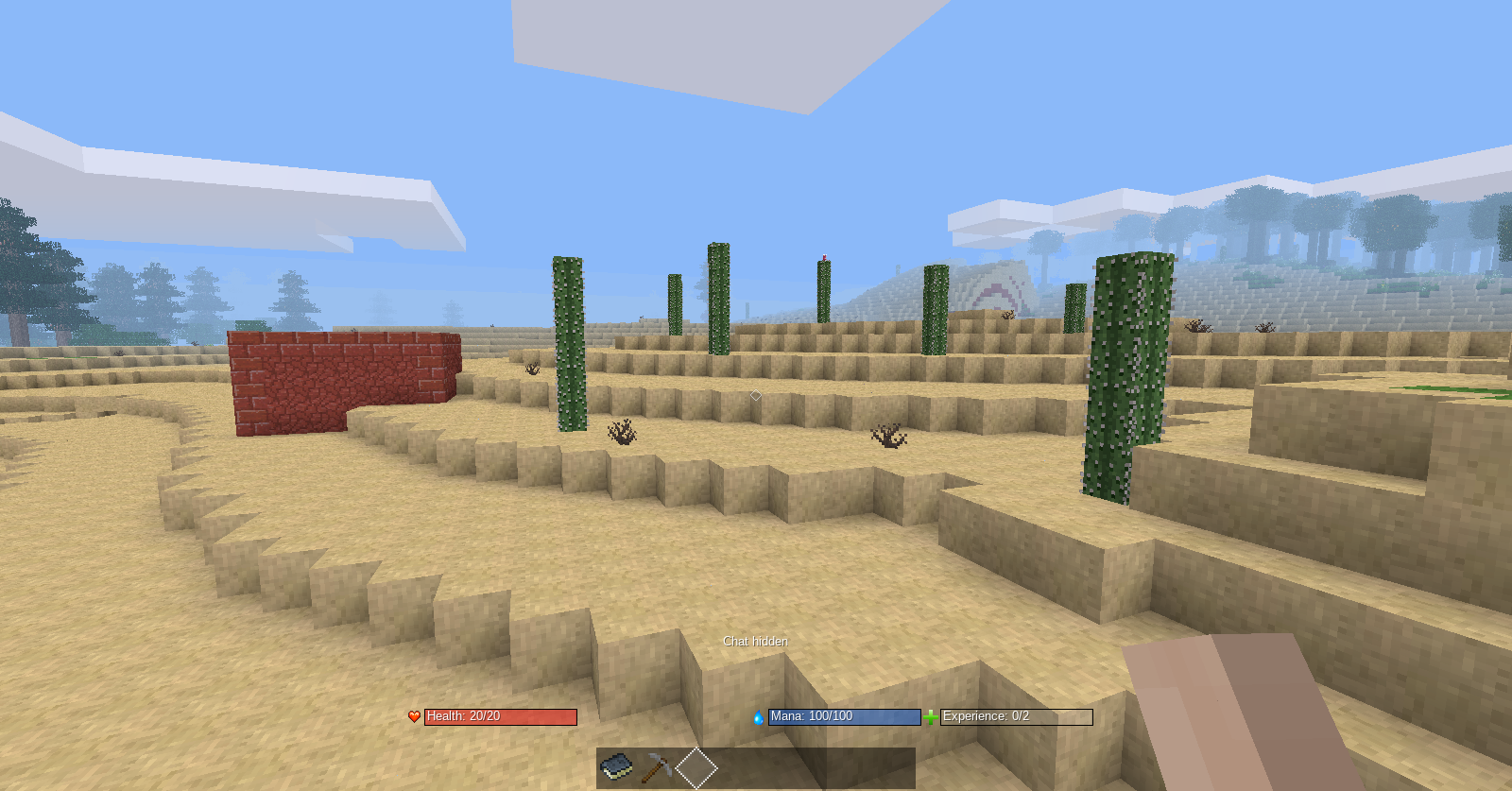 A house in the desert 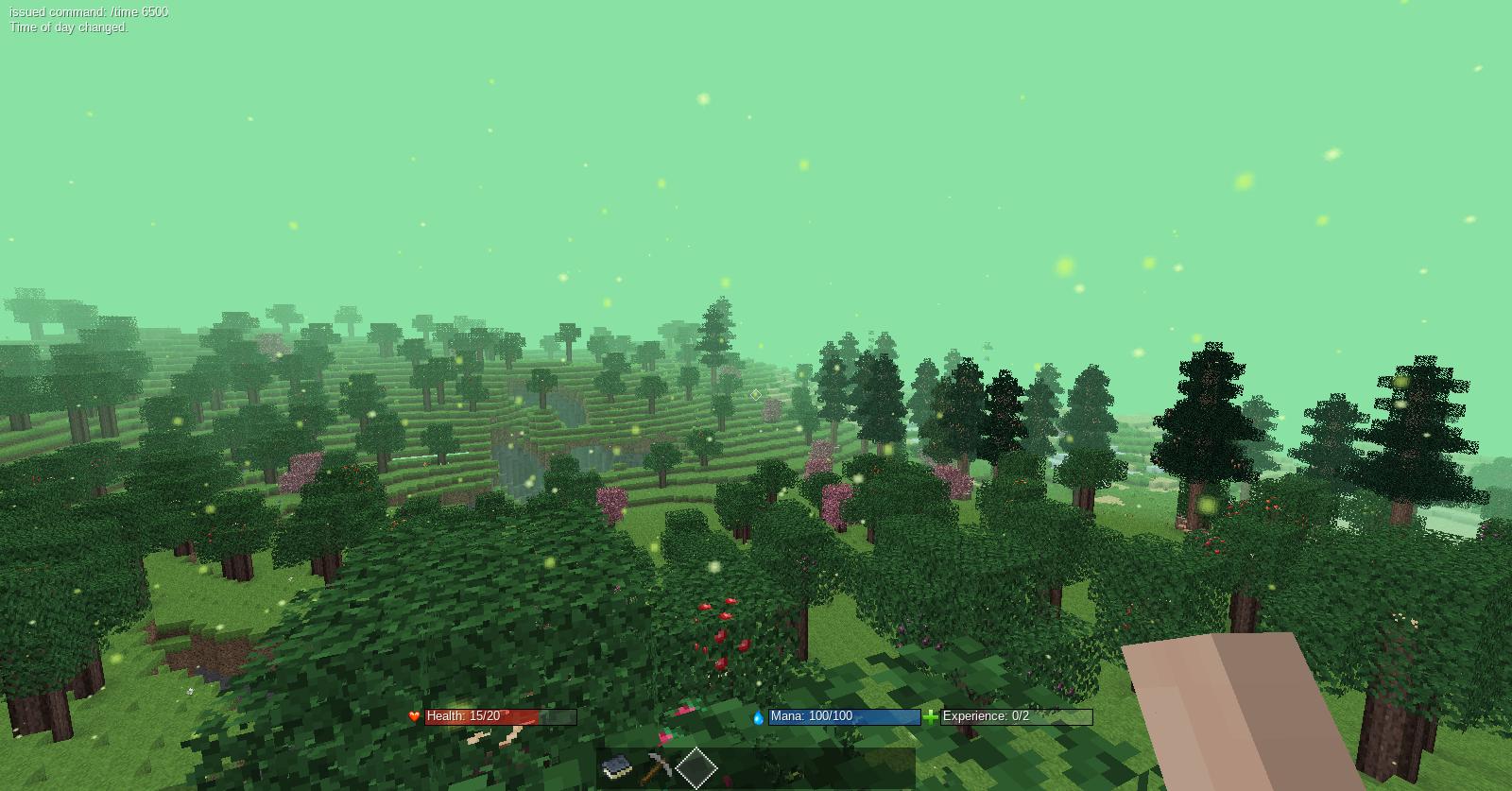 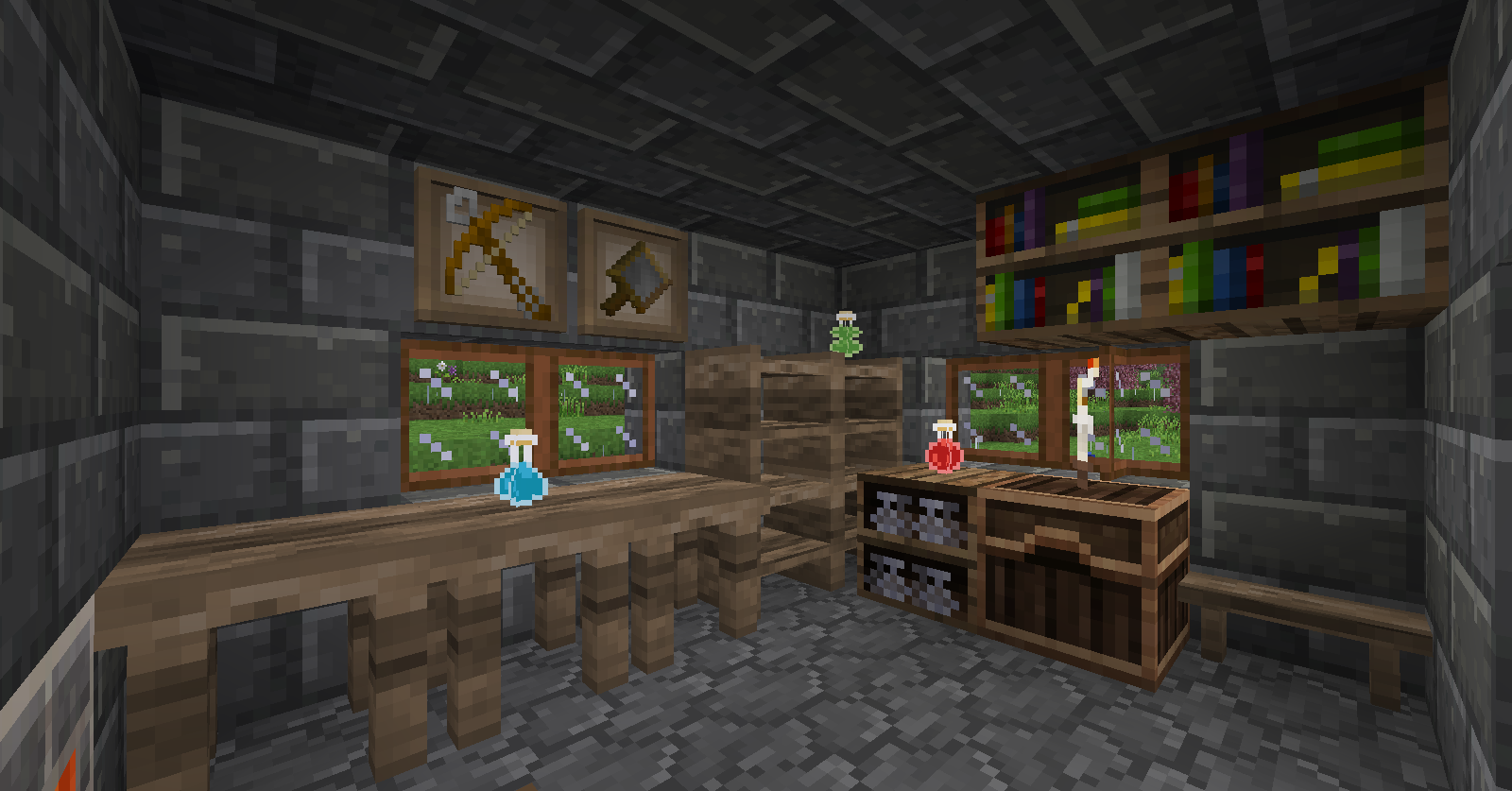 Some furniture, potions, and other items

by texmex
Looks good, v-rob. I've thought of building upon Voxelgarden myself at times, so it's good to see it live on.

Just curious, what was the gist of the "definite direction" you first had in mind?

by texmex
A few thoughts:
- Put breath bar somewhere else so that there's no odd space where it hides
- Why a stone pickaxe as initial stuff? It allows for bypassing wooden tools completely.
- Are there any dangers, perhaps at night?
- Some homedecor items looks quite non-voxel and out of place.
- I'm struck by how similar this beefed up version of Voxelgarden is to my current game efforts, looking at the low-tech and even the player stepheight solution. 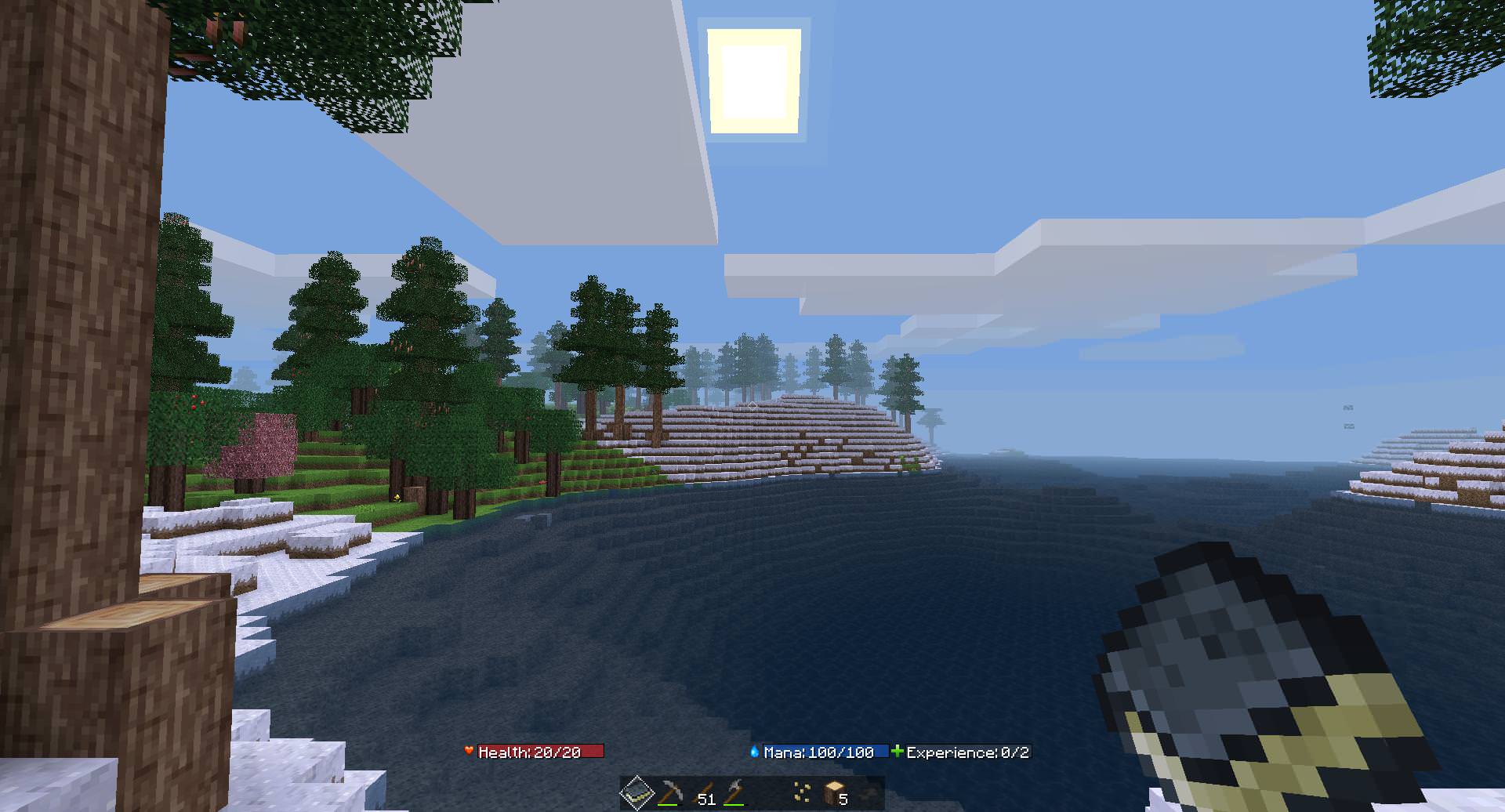 texmex wrote:A few thoughts:
- Put breath bar somewhere else so that there's no odd space where it hides
- Why a stone pickaxe as initial stuff? It allows for bypassing wooden tools completely.
- Are there any dangers, perhaps at night?
- Some homedecor items looks quite non-voxel and out of place.
- I'm struck by how similar this beefed up version of Voxelgarden is to my current game efforts, looking at the low-tech and even the player stepheight solution.

- I'm not certain how to organize HUD elements properly. I'll try to fix it again.
- I don't remember why I did that. I probably had a reason, but I forgot :). I want to find a solution that forces the player to get a full set of wooden tools before stone since wooden tools are all but useless.
- Unfortunately, no. This was part of the original game plan that got ditched because I don't know any good dangers. Mobs are the obvious choice, but there are so many mobs mods, and I don't know what to pick. I've tried mobs_redo, but I didn't have much luck. It does seem strange to have spears, bows, and arrows with no mobs.
- Actually, furniture was made especially for ruins. Not ruins that are just a pile of rubble, but mostly intact ruins. But, since I don't know how to spawn ruins very well and the villages mod is rather buggy in a few ways, ruins never got implemented and thus furniture wasn't removed.

One solution for the hudbars would be to put them as a stack in the bottom left, with breath on the top or bottom.


v-rob wrote:- Actually, furniture was made especially for ruins. Not ruins that are just a pile of rubble, but mostly intact ruins. But, since I don't know how to spawn ruins very well and the villages mod is rather buggy in a few ways, ruins never got implemented and thus furniture wasn't removed.

One more issue is that trees with multiple nodes as base often spawn on the ground, not in it (on hills for example). A solution to that can be to use place_offset_y = -1 in those tree decoration definitions.

by twoelk
iirc Dan Duncombe made the currency mod for VanessaE's old dreambuilder Survival server. He actually made or forked quite a few mods while active on that server. The first barter tables in minetest history stood in front of his shop at spawn. :-P

by texmex
Are you maintaining this game, v-rob?

Well, I haven't touched it for a while for two reasons: A) I forgot about it :-) and B) I had a lack of good ideas on how to not make this feel like a replica of MT Game. Actually, A was caused by B, and because of A, I forgot about working on B, so it was a cycle in which no work was done. So thanks for bringing this up again.

Of course, I am much better at programming than I was before, so I can implement many more ideas than what I had before.

Anyway, I have some (meaning a lot) ideas that I'll put down here that I've either had from the start or just came up with today and yesterday while thinking about it again.
That's about all I can think of right now. I need to collect my thoughts and get to work on it sometime. The real problem will be integrating this stuff together and making it a game with a good, lasting gameplay. If anyone wants to help sometime with some things, I'd be more than happy for the help.

Part of the reason for this game is to create a game that feels fun to play in survival and will receive very few updates that will ever break or majorly change worlds, requiring people to restart from scratch (one of the reasons I almost never build anything in Minetest Game for fear that I won't get the best things from the next update).

Anyway, sorry for the wall of text, and as an answer for your question, no, I wasn't really maintaining the game before, but I probably will start on it again with some major changes, and probably a complete rewrite of the code from scratch. So, you can probably expect some updates on this soon.

by texmex
Lol, I see. A quite interesting wall of text I have to say! Lots of great ideas. I especially like that you in a way have thought of the so called game loop and that it’s not the usual shtick but in this case more focused on forming relationships and travelling. I’d recommend you keep that vision, because it’s what will make your game stand out.

From my own experiments in MT game creation I recognize the blessing and the curse of knowing the capabilities of the engine beforehand. It’s like that knowledge unlocks great ideas on what can be created for the game on the one hand, but perhaps equally the very same knowledge locks your ideas in the usual MC/MT concepts. The most interesting work achieved in this community is the kind that does not limit itself to the MC/MT conventions imo, so keep all weird ideas.

I will follow this development though I got to ask: why not join forces with Casimir in developing the Voxelgarden concept? Perhaps the visions are too far apart, but in that case you should come up with an original title imo. :)

by v-rob
An original title is important, I do agree. I never came up with one because the game currently doesn't amount to much difference in comparison to the original Voxelgarden, so I saw no reason to change it at the time.

I would quite willingly join forces with Casimir or anyone who wants to help. Big projects are (almost) always better when more people work on them.

by texmex
Understandable. And being the minimalist game that Voxelgarden I see its potential as a project foundation.

Same here. The problem that emerges is similar to that of MTG: how to collaboratively build a coherent game experience without a clear vision and with a pretty granular backlog? And if that backlog is compiled, will we all agree on the course of action? This problem may of course be overcome with a lot of communication, I’m just laying it out as I see it. =]

by Sokomine
V-rob: Your plan for the game seem quite big. Your ideas are very intresting and in many areas on par with what I'd like to see in a game. My mg_villages mod is a step in that direction. And even though it's just one step it's already quite a lot of work and complexity. Perhaps you ought to use existing mods where possible. There are some nice mob mods with villagers out there. BrandonReeses AdventureTest game is probably the one that has progressed most into the direction of story/villagers to interact with. It's a pity that that game currently doesn't get any more development.

Learning crafts from mobs would also be great. I still dream of sending the player around, from village to village, with the player adding one receipe in each village to his book with craft receipes.
All times are UTC
Page 1 of 1