This has probably been done before, but I've started one myself with the intention of added more stuff from Minetest Game.

The code is at http://github.com/jastevenson303/lavaland 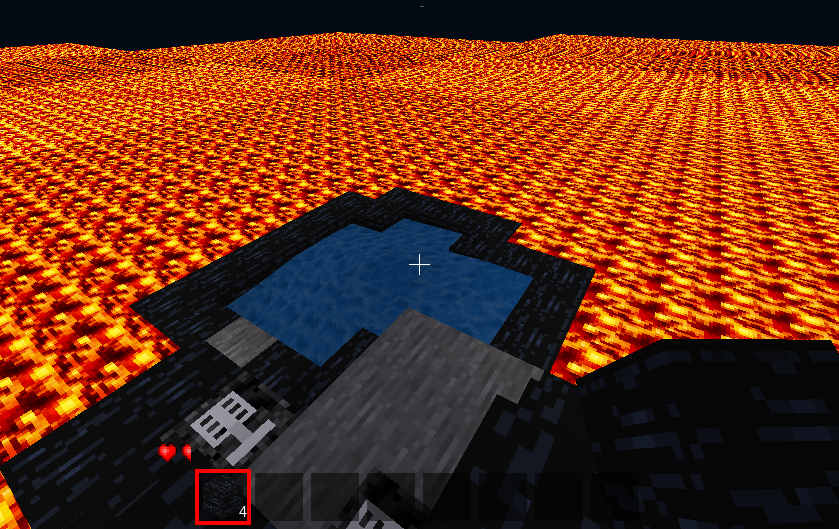 Explanation: When player dies in lava, that lava node is replaced with a water source node, and lava cooling occurs. 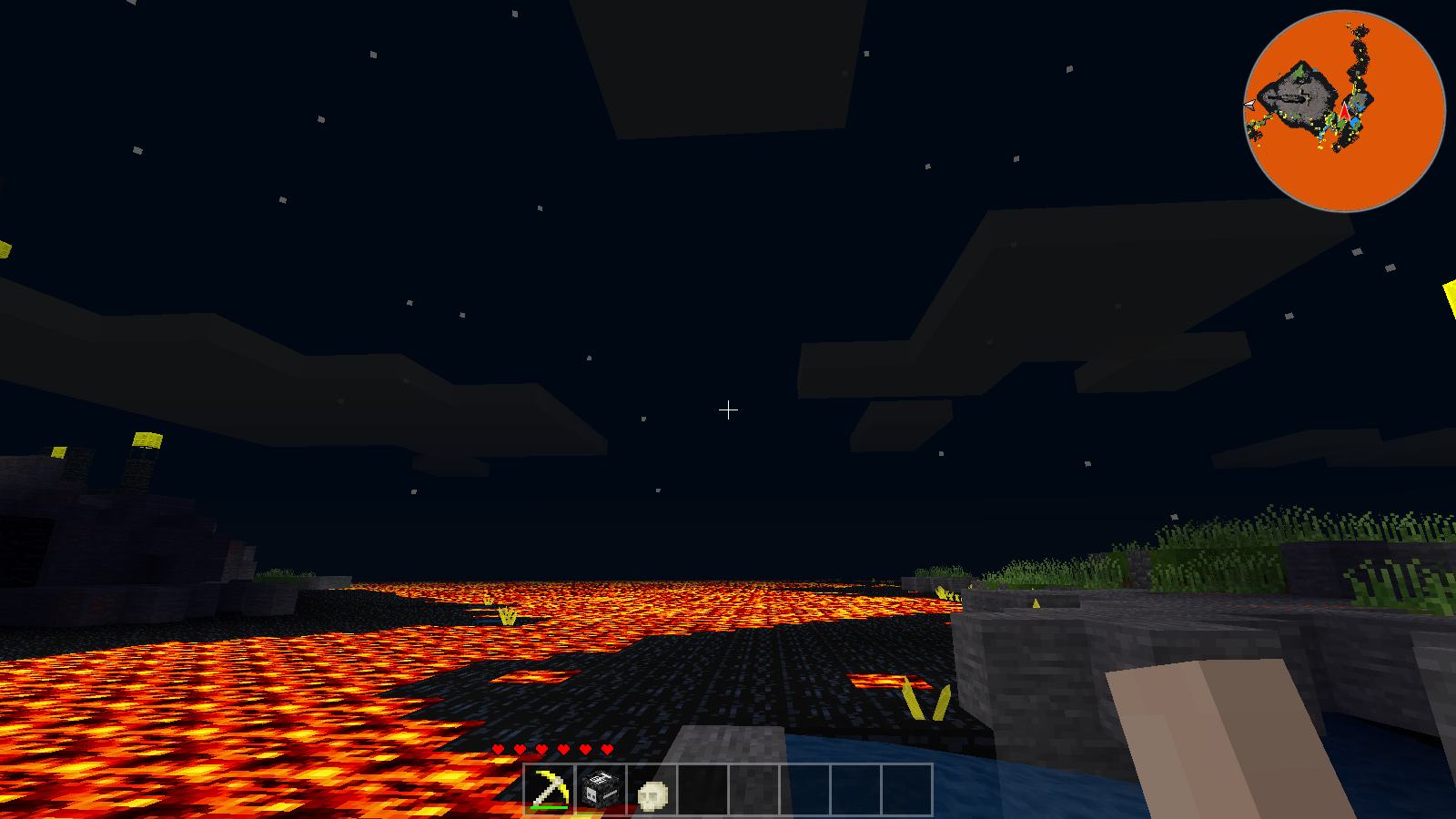 You do not need the "home" priv in order to use /home, /sethome, or the [Home] button. There is a [Help] screen on the [Status] menu. It's a little chaotic right now, with the player inventory and all the buttons, and so that will likely be redone at some point. In fact, right now if you haven't chatted yet, and try to open the chat menu, you'll receive a crash.

A full set of mese armor (helmet, leggings, boots, chestplate, shield) will prevent node damage from fire, mese crystals, etc., as well as lava however with lava receiving one point of damage yet. The obsidian armor will protect against fall damage if fully equipped, and the bronze will ensure you never run of out breath underwater! The armor stand has two buttons, [Store] and [Apply]. Pressing [Store] will put your own on the stand, and pressing [Apply] will equip you with the armor on the stand.

This game is started from scratch, and incorporated Minetest Game. Some mods were not transferred over, notably the mapgen mod, as this is an entirely different environment to MTG. For example, using water and lava, new land may be made. But otherwise, it's all lava! Currently, when a new player joins on a fresh map, there is nothing but lava, and the player will surely die. However, as is always the case with Lavaland, dying in lava results in placing a water source node where you died. This creates new land.

New players do get a full suit of items, but none of them are ultimately needed. The game can be played from the beginning starting with no items. The game was started entirely empty, and the first few mods added were meant to enable sneakjumping, and hunger and stamina. When sprinting, you can sneakjump, and perform tricks. The structures produced by lava cooling with water and lava, and water, can be a lot of fun to climb and race to the top!

So the floor is lava now? Adding some random platforms would be funny in PvP to let players fall down into the lava.
Look, I programmed a bug for you. >> Mod Search Engine << - Mods by Krock - DuckDuckGo mod search bang: !mtmod <keyword here>

That is a good idea. I've not done much with mapgen stuff before, so it'd be a good learning opportunity. Thanks!
https://youtu.be/BlXk48hZbc0

This is like unternull, but with lava instead of water. Makes falling off your platform more risky :)
What is SCP-055?

I played on The Sea is My Life server once or twice, I didn't get it but, was that Unternull? Yeah I still haven't gotten to making automatic platforms, or anything with mapgen. I've just been using lava cooling and buckets for land, but I'd like to get into schematics/mapgen stuff.
https://youtu.be/BlXk48hZbc0 Does anyone know if it's possible to have floating dungeons generate above y=0 in singlenode?
https://youtu.be/BlXk48hZbc0

> possible to have floating dungeons generate above y=0 in singlenode?

Only possible with an engine change. Dungeons don't actually generate anywhere in singlenode.

Thank you paramat. Some other simulation or emulation of dungeons would be the next best thing, probably.

You commented that I shouldn't have commented out the calc_lighting stuff -- I don't even know what it all does. I didn't do that - yet - because it doesn't seem to make a difference to the visuals of the landscape.

One last thing: You'd commented about lava being light_source 15, but it's minetest.light_max - 1, so 14? 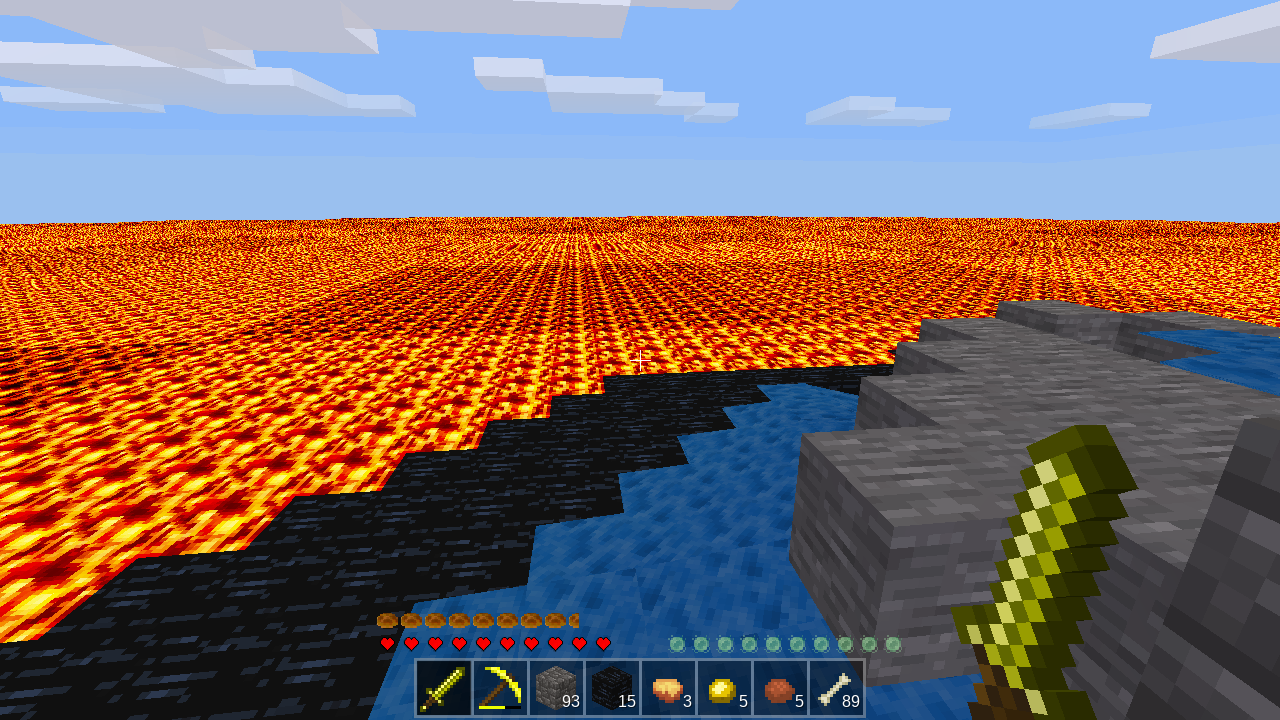 It is slow and seems overly intensive -- I'd chalked it up to my lava sounds ABM.

> I didn't do that - yet - because it doesn't seem to make a difference to the visuals of the landscape.

In the issue i wrote that it probably won't make a visual difference, however the light levels of nodes will be wrong, which will cause problems for you later.

I can't see where i wrote that in the issue.

That looks fine.
You can simply use 'vm:calc_lighting()', no need to enter the minpos and maxpos, in fact it's better not to because if those are left out the correct volume is always used by default.

Can somebody help me? I've got boats that detach after a few seconds, but still receive input from the player. I don't know when it broke, but it's obviously not present in MTG. There are two boats, a mese and wood one, and I tried removing this version of boats for the stock one, and the problem persisted. I tried reverting /sit and /lay, and I tried without sprint/stamina enabled (sprint(player) commented in player/init.lua on_joinplayer), but still the problem remains.

I'm thoroughly confused, so if anyone can offer any insights, advice or assistance here, I would be very grateful and appreciative! Thanks.

Edit: Fixed. Had to do with adding XP while detached. I return if attached on XP add, now, but will try and figure out how to fix that so you still get XP when attached to objects. Thanks for reading.

Edit2: Still seems to be detaching sometimes, not as much -- back to the drawing board.
Edit2a: Another improvement to boats may have made a difference. https://github.com/jastevenson303/Laval ... 116a00a4eb
Edit9: Now I am simply attaching the driver to the boat every single step. Grr.

I see one other server is running this game. That's cool! I haven't checked it out, yet, however. Thanks!
https://youtu.be/BlXk48hZbc0

jas wrote:I see one other server is running this game. That's cool! I haven't checked it out, yet, however. Thanks!

No, thank YOU! This game is amazing!!! Alright! Glad you like it, dig the screenshot. I often think about turning stone near water into cobble, making grass appear more easily.

I modified/added some sounds, still a lot of them are missing or need adjusting. Autopickup bug fixed when player has full inventory. Puncher now receives one damage point if target wields a warpstone. The wielder of the warpstone is still immune to punches.

I adjusted levitation, on recommendation of reandh3, making it stiffer. It's subject to further adjustment. skiphoppy, I noticed you're running 5.0.1 minetestserver, which is missing some features used in this game, like levitation.
https://youtu.be/BlXk48hZbc0

I really love the game mechanic where minerals appear as lava cools. That needs to get reused in some other games, I think!

And I also really love the need to break down stone in various ways to get what you need: stone near water to break down into mossy cobblestone and then dirt; stone to break down into gravel and then sand when you need to make glass, etc. It makes for a fascinating world where every piece of terrain has a history. It may be prehistory for someone who wasn't on the server from the beginning, but that makes it feel like Star Wars, where giant projects are sitting around completed by previous generations and looking at them makes you speculate how they got there.

I've noticed a lot of griefers who want to show up and do pvp and then disappear. I disabled pvp on my server - it might be nice to have protection disable pvp in the protected area.

They also seem to enjoy digging the obsidian out from underneath players to make them fall into lava. But that becomes a motivation to use more protection.

Some very good points, skiphoppy! Also I agree about the "history" of the map, where it would seem everything was manually put there.

I intend to add a "chance" value to the mineral generation via lava cooling. Meant to from the beginning - LOL - and it would probably take about as much time as typing this, but still haven't gotten to it yet. I had a mental TODO list that was quite long, but I seem to have misplaced it these last few days.

I had been working sporadically on an autocrafter, that no one asked for. Not a machine, unfortunately, but a formspec to easily select a craftable item, intended for mobile phones. I don't know where that will take me ultimately, but so far it's resulting in a bit of downtime from the game/server.

I had asked before about possibility adding a toggle to claimed areas, such that you may set your area(s) to disable PvP. Instead, I've been considering an emerald warpstone that when placed would disable PvP for an area. I've also considered giving new players a warpstone to wield, and/or at least removing the sword.

skiphoppy wrote:They also seem to enjoy digging the obsidian out from underneath players to make them fall into lava. But that becomes a motivation to use more protection.

This is funny, I didn't suspect this would happen. Some method of immunity from lava would help, like special boots that when equipped make you walk on lava. (I don't know how, but it's interesting to think about.) It would be great of course if the protection lag didn't allow the player to fall at all, of course. And there are solutions out there for moving or even damaging players that dig protection. Very interesting problem. :) Thanks for the comments!
https://youtu.be/BlXk48hZbc0

There exists a flagging system, and I've just updated it to automatically issue yellow cards to players on repeated protection violation. Nine yellow flags convert to one red flag, and three red flags converts to a kick.

I also added automatic flagging on cheat detection, to possibly help address dead players. I haven't experienced it lately, but previously there was a bug where the player wasn't able to respawn, walking around dead, etc.

I have no doubt that the time check will need to be adjusted. I think it's like two protection violations in two seconds that gets a flag, and pops up a screen showing current flags, and damages the player by one damage point.

If you have the `judge' priv, you can /flag <name> <yellow|red> manually. Typing /manage <name> will show that player's flags.
https://youtu.be/BlXk48hZbc0

Added a staff of teleportation Warps you to wherever the projectile lands 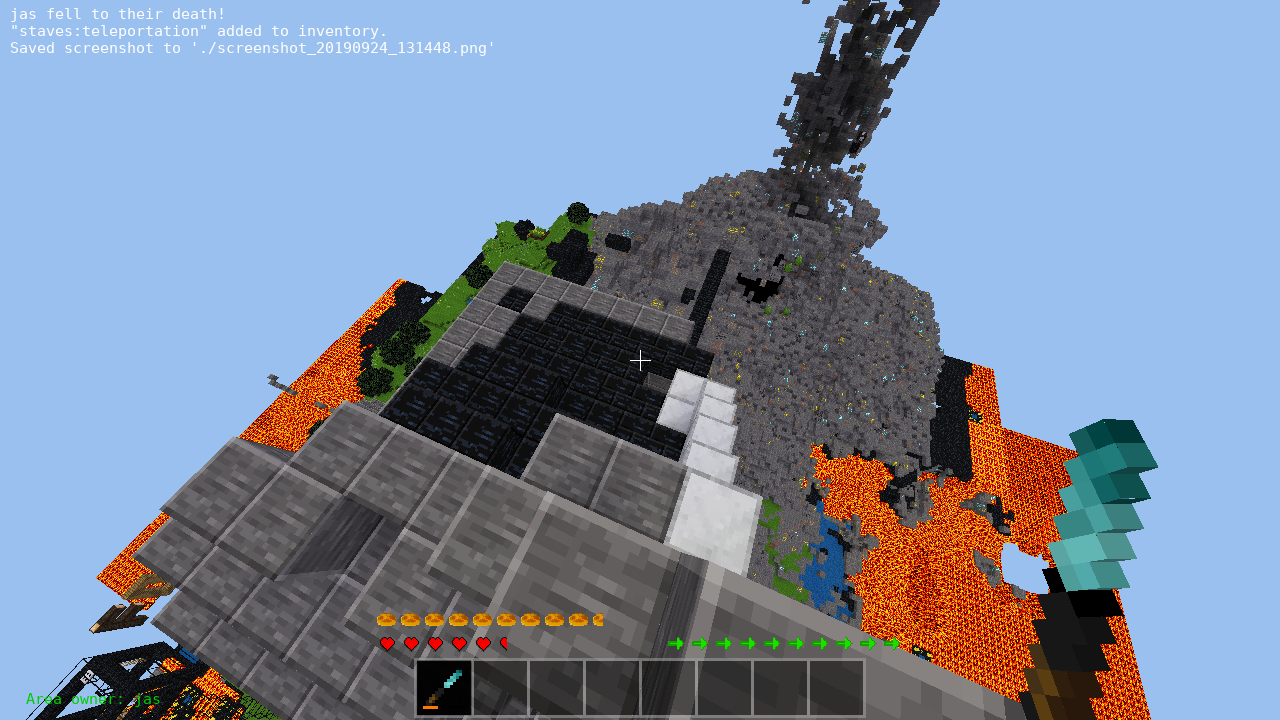 Also a staff of destruction Here is a video

We're seeing a situation on our family server where every time someone connects, they take a big hit to health, knocking down to about 2 hearts left. It seems very consistent. Any chance this is fixed in the latest updates?

It's fixed in the sense that it doesn't happen for me ;) It's got to be a problem with the stats, I'm thinking. If you haven't updated in a while, you can try that and see if it helps.

Otherwise I'm not sure, and I'll have to try to reproduce it. It reminds me that, as a player's level rises, their max HP does also. But I'm guessing that's not the same as this?

Postscript: If you have already updated and the problem persists, you might try to issue /save before leaving and seeing if the HP is correct on relog. Let me know if you have any more thoughts on this, as I'm at a bit of a loss.

Pps: Also, can you look at the /stats before logging out, and then again on login? You can use the [Status] button (maybe take a screenshot) or type something like "/stats hp hp_max." Thanks.
https://youtu.be/BlXk48hZbc0
Post Reply
34 posts