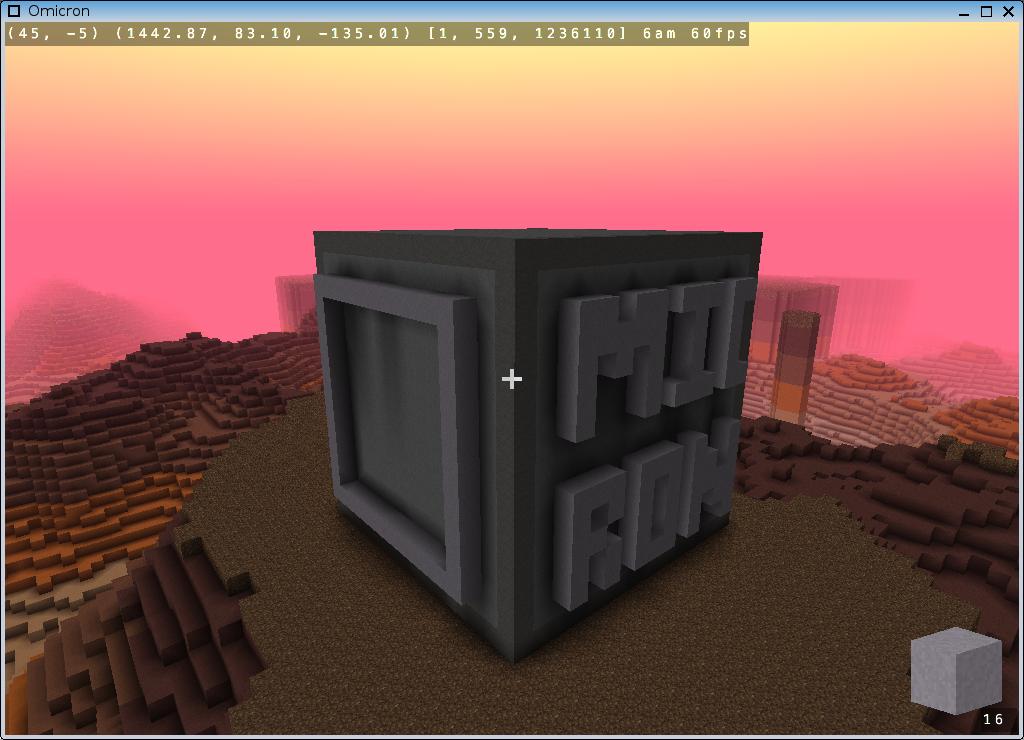 I need a better header btw. This one's old. To see screenshots, scroll down the thread, I post images every week.


Omicron is a small voxel sandbox game inspired by Minecraft, minetest and terraria. The project is Under developpement and is still in it's beginings. This project is a fork of CraftNG made by Twetzel, which is already a fork of Craft, a game made by Michael Fogleman. The game is planned to be RPG-like with an open environnement where you fight a kind of "corruption" (terraria-concept) that progressively transforms the world into an empty and dangerous wasteland. 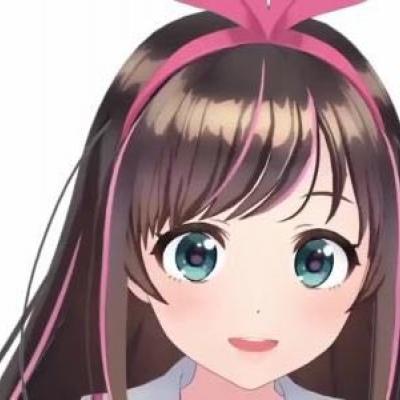 screenshot-logo2.jpg
(83.34 KiB) Not downloaded yet

The graphics/terrain remind me of MC, also the hotbar reminds me of the original one used in minetest; so-far all looks good, but a video ft. more information would be nice :-).

Why is you're screenshot, one from the CraftNG fork of Michael Fogleman's 'Craft' ?

Is you're game then, a fork of CraftNG?
I'm just trying to understand this.
Ich mag keine grünen Eier und Schinken, ich mag sie nicht Sam I Am

Stix wrote:The graphics/terrain remind me of MC, also the hotbar reminds me of the original one used in minetest; so-far all looks good, but a video ft. more information would be nice :-).


Also what is this a fork of?

TumeniNodes wrote:Is you're game then, a fork of CraftNG?
I'm just trying to understand this.

My game's a fork of craft NG. I used the old screenshot cause I didn't have time to upload new screenies. My internet went boom before!
About the fork and everything; all is in the readme.

Also, what info would you like to have? I'm also open to suggestion!


NOTE: In the last version of the game, there's a bug that spawns you high up in the air on a dirt patch. Jump of it to see real world.
ＯＭＩＣＲＯＮ - pre-release 0.7 "Tweaky Update" 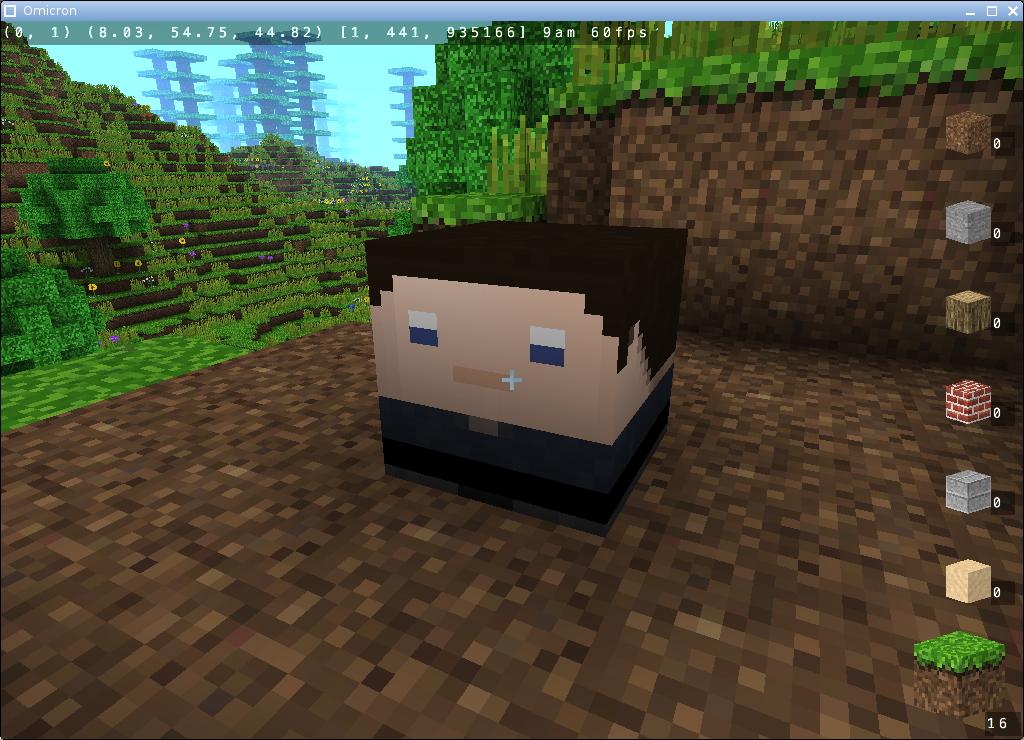 -> The player block, I added it for fun. -> Sunset on the Desert and the Jungle. Note the trees. 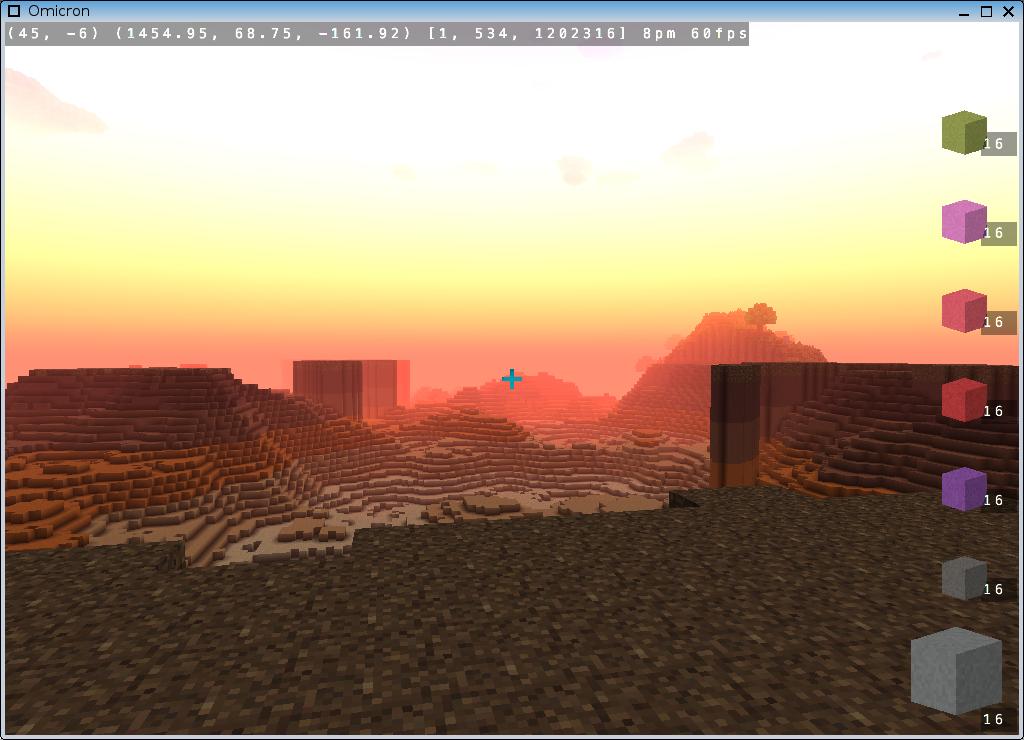 -> The first biome I created: MESA. I must admit I'm proud of the 'monoliths'.

screenshot-sunset.jpg
(76.69 KiB) Not downloaded yet

screenshot-mesa.jpg
(82.47 KiB) Not downloaded yet

i'll put it on github. Even if don't really want to.

azekill_DIABLO wrote:i'll put it on github. Even if don't really want to.

I think, eventually all git hosts are going to end up being owned by corporations we don't like, sadly
Ich mag keine grünen Eier und Schinken, ich mag sie nicht Sam I Am

Sadly yes. Well not if I get a company before :D

Has someone tried the game yet? (just asking)

DEVLOG: I finally made some blocks 'buildable to' (this means, if you don't know, that the block you'll place will replace it). It took my whole afternoon and I have and headache but it works perfectly using a line_of_sight collision detector. This will be applied to: I'm also working on a special render for liquids. It would allow you to see trough liquids but still see the other blocks (Xray glitches).

Added Bedrock equivalent, just to avoid people to fall into the void by error. (was actually already impossible but I didn't like to have stone has a flat bottom, it looked odd).

Keep plucking away at it, and I will try it eventually.
I love a lot of the aspects of 'craft', aside from the controls when flying (I like MT/MTG's flight controls much better)

I have not checked out CraftNG yet

I would love to be able to work the clouds and the visuals for day/night changes into MTG but it would require engine work too.
Would be well worth it though
Ich mag keine grünen Eier und Schinken, ich mag sie nicht Sam I Am

Screw it, I'm gonna host a GIT server.
A man much wiser than me once said: "go away, you are bothering me"

Did you even read through the posts/topic before you posted this???
Hey, what can i say? I'm the bad guy.

@Rubenwardy >
Thanks for the answer Stix. Obviously I did much(well I'm still working on it, I only have 5 hours of work on it) more. Read my post viewtopic.php?f=55&t=20478#p325752 and see the readme. Everyday I'm adding new things. Next will be the render of water. If I manage to do that, I'll add some liquids and I'll do a new release.

@Tumeni >
Tumeni, the game is called Omicron, not CraftNG. My game's a fork of craft NG. ANd I'll do something for the flight controls, I agree they are odd.

EDIT: btw I worked on caves, they look quite nice, IMHO. Please tell me If you want to see any features.
ＯＭＩＣＲＯＮ - pre-release 0.7 "Tweaky Update" 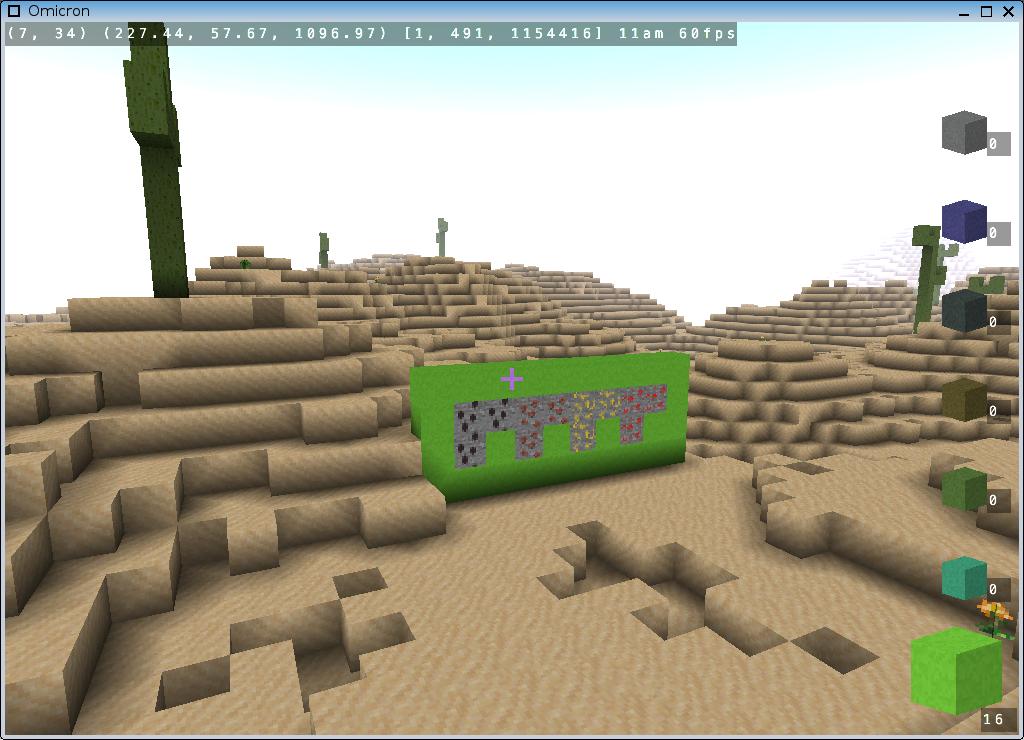 New ores. Textures are only placeholders, they'll improved. Note the cactus texture too. A mine I built. It's only for testing obviously. A castle built on a hill.

screenshot-castle.jpg
(83.47 KiB) Not downloaded yet

screenshot-mine.jpg
(126.63 KiB) Not downloaded yet

screenshot-ores_cactus.jpg
(97.07 KiB) Not downloaded yet

Fantastic. But why haven't you advertise this project in the Screenshots thread? Sincerely, judging by what you posted there one could hardly imagine that you're engaded in such an obviously ambitious project.

Going to check it, keep on, it looks very nice.
To miss the joy is to miss all. Robert Louis Stevenson

voxelproof wrote:Fantastic. But why haven't you advertise this project in the Screenshots thread? Sincerely, judging by what you posted there one could hardly imagine that you're engaded in such an obviously ambitious project.

Going to check it, keep on, it looks very nice.

Thanks! You made my day better ;)

I didn't really think to advertise in screenshot thread. Also, the topic was moved to offtopic sadly :( so if I talk about it in the Screenshot Thread, I'll get offtopic-ed. But i'll do.

DEVLOG: I found a way to alter the render of transparent block. Might not work but if it does it would do an enormous improvement over performance and design of the blocks. It would stop xray-ing too. I don't really think it'll work though, but I must try everything in order to suceed.

New caves does an enormous performance drop (instead of randomly placing stone without checking anything, it places air in stone.). If I don't find a way to improve that, it'll make the game really slow. It's a real issue that I don't really understand. I'm new to noises.
ＯＭＩＣＲＯＮ - pre-release 0.7 "Tweaky Update"

are there any pre-compiled win versions.. i wanna try it under windows! thanks to all who are have a win version of the project!

cHyper wrote:are there any pre-compiled win versions.. i wanna try it under windows! thanks to all who are have a win version of the project!

err... I got a little problem about this... something like 'I can't compile anything on my windows'. But if you see the readme, the compilation is quite fast. That's the advantage of C.
ＯＭＩＣＲＯＮ - pre-release 0.7 "Tweaky Update"

Why should "fast compilation" be an advantage of C ? How are other languages slower(for example Java) ?
C++ is little faster than Java(can go up to 30%) but in exchange is just - well - not platform independent. This makes releasing(especially for different devices) FAR harder.


Are there any mobs in Omicron ?
My stuff: Projects - Mods - Website

LMD wrote:Why should "fast compilation" be an advantage of C ? How are other languages slower(for example Java) ?

I just found out that compilation in C is far simpler than I first thought. Only 3 commands are needed to install the libs, build Cmake lists and build the executable. And it's REALLY fast. Like 15 seconds to build.


Are there any mobs in Omicron ?

Not for now. They'll be hard to add. I'm already stuck with the water rendering.
ＯＭＩＣＲＯＮ - pre-release 0.7 "Tweaky Update"

Please dont take me wrong, but why are you making Omicron ? How will it be different(better) from MT/craftNG ?

BTW, I saw you are making a website. Have you taken a look at my GitHub project md-pypage yet ? Its a Python Script that creates you a beautiful website out of MarkDown files based on 3 template files : one for CSS, one for regular page template(HTML), and one for index page template(HTML).