Natural Biomes is a mod that adds 7 new biomes to your Minetest world.

This biome is similar to the classic savanna, but has more green vegetation: 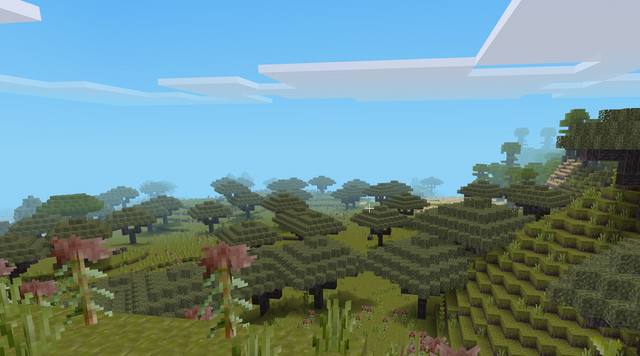 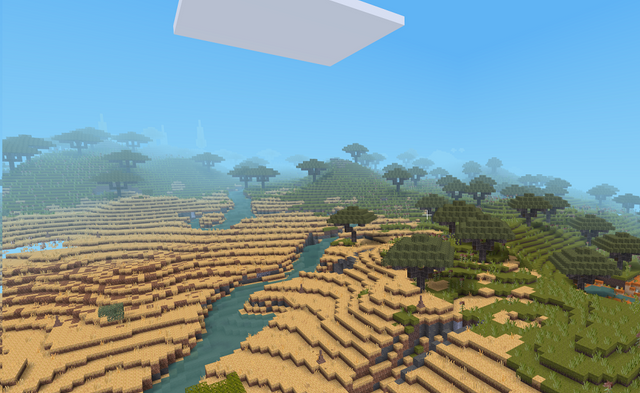 A dry biome that spawns in the near of deserts and savannas, inspired by the heart of Australia: 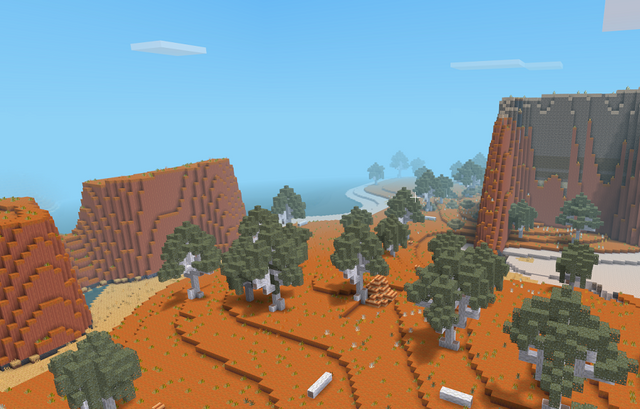 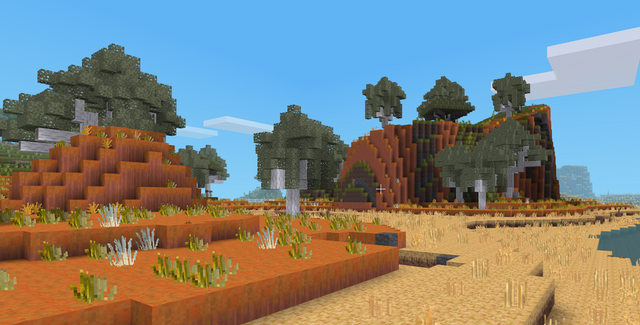 This lowland biome adds a swampy landscape with alder trees and reeds. Inspired by the North German alder swamps: 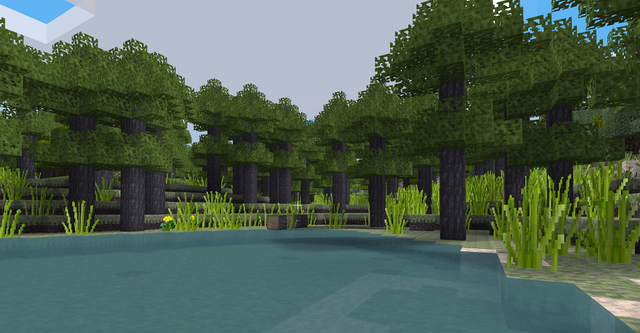 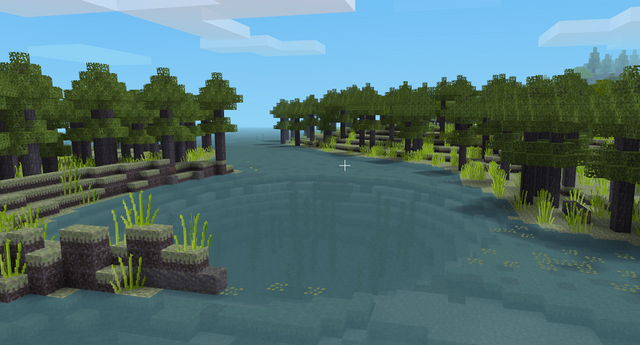 This biome only spawns in higher latitudes and adds a typical alpine open forest landscape: 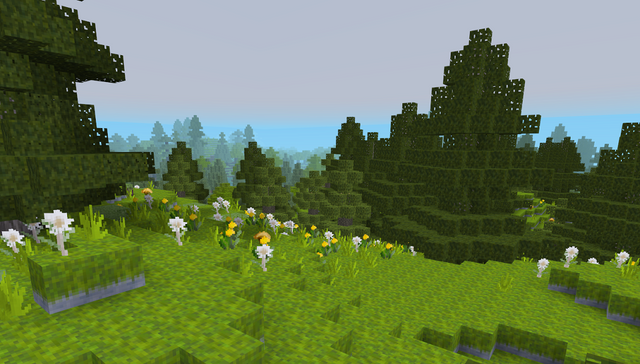 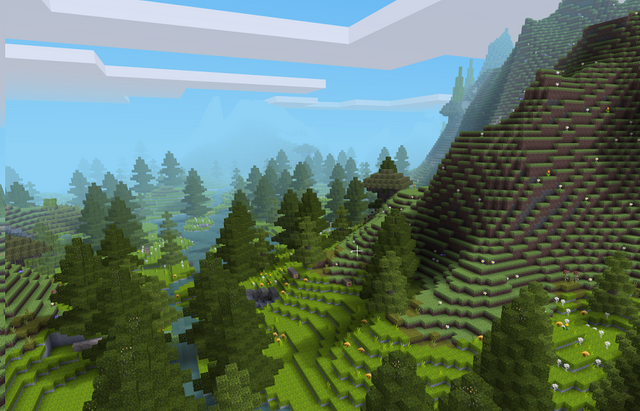 This biome appears at the tropical coast line and gives your world a Caribbean flair: 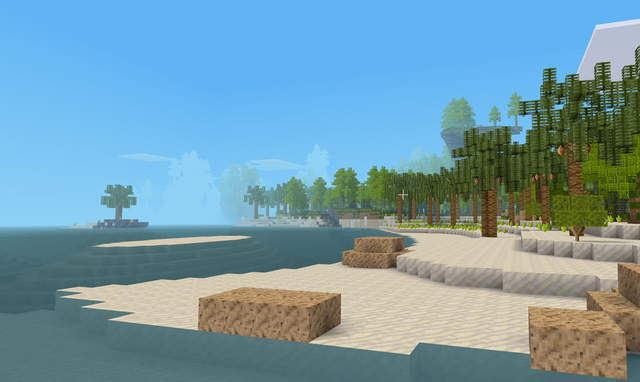 Adds a dense bamboo forest with some banana trees in tropical regions: 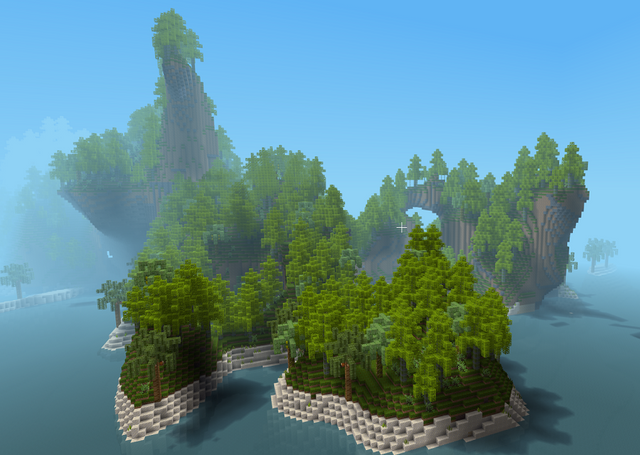 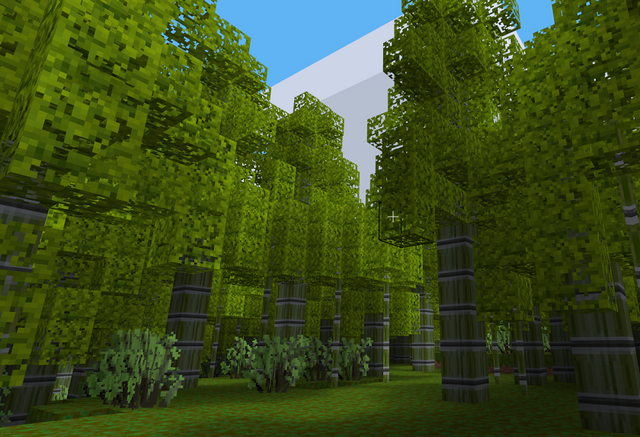 Inspired by the Greek coastal regions and ancient ruins: 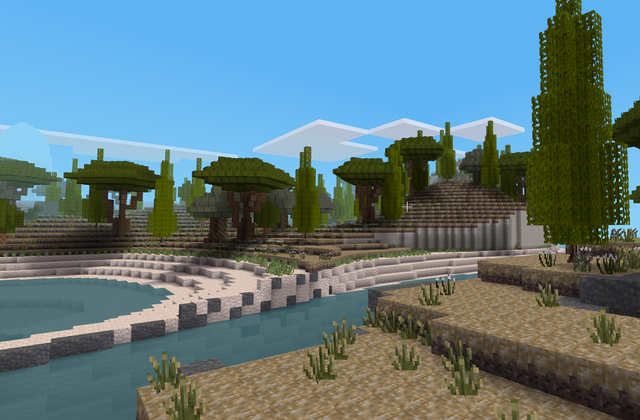 The mod also contains many new building parts, including stairs, slabs and walls:

This mod should not overwrite the existing biomes, but makes some of them appear lesser often.
Please post bugs or suggestions here.

The graphics are in line with my Texture Pack (Wilhelmines Texture Pack) and will not match the standard Minetest textures.

I plan to make this mod compatible with my other mods (Animal World, Native Villages, People) but I struggle with one thing. I made also the Living Floatlands mod which adds dinosaurs to the floatlands, but the floatlands are only available in V7 map generator and I think most people don’t use the floatlands at all.
I also could port down the dinosaurs down to Midgard and let them populate those 7 new biomes from the Natural Biomes mod. Making special dinosaur biomes in Midgard would be possible, but complicated, because if too many biomes are in the same climate zone, some will never appear again, they will be overwritten by the others (Etheral mod has this problem too) I can make a cold palaeolithical steppe biome for the mammoths, sabertooth and rhinos and a kind of giant tree forest for the dinosaurs, but there is not much space for biomes in the hotter climate zones anymore.
On the other side I also have a plan what new normal animals should be in the 7 new biomes. For example Zebras, Koalas, Ibex, Coconut Crab, Heron and many more.
I could also do special dinosaur biomes in the floatlands that only appear there, but it would take months to years to get everything finished, because I don’t have so much time to do anything I would like to do fast enough.

So I will make an opinion poll to hear your statement:

Depending how much modeling work you feel like doing theres also all the extinct megafauna from aus/nz (other countries as well): A little later timewise than dino's but might fit, floatlands last of the dino's, ground level extinct Pleistocene animals?

I might integrate it into Adsurv...
Pop music is called that because it's so bad it pops your eardrums

this mod is running on Centeria Survival. you will have to explore new areas to find the biomes

Note: This happens with latest master of this mod, on Minetest 5.6.0-dev.

The schematic for the tall / wide pine tree, from the mediterranean biome, erases any block present in its space when it grows. You can reproduce this easily; it ruins the landscape and possibly your progress, too! Be careful.

The biomes look really nice otherwise!
. o O ( It's refactoring all the way down, you never actually run the code. )

So, yesterday I started a world with all of your mods, but quickly stopped because alder leaves weren't decaying.
At first I thought it was just because of the bad schematic which places all the leaves with param2 = 1. So I just changed the no-decay value to 25 as a workaround. When that didn't help I took a quick look through your code and noticed that non of your trees are registered for leave decay in the fist place.
You will have to use the 'default.register_leafdecay' function for decay to work. Just adding the 'leafdecay' group to the leaves is not enough.
Relevant API section: https://github.com/minetest/minetest_ga ... i.txt#L916
the unit of caring

I have added this to the mod, but only the bushes (Mediterranean Cypress for example) work for leaf decay. The big trees dont loose their leaves, even if i add them. What is wrong?

Most likely the schematics that place the big trees all place the tree leaves with "param2 = 1" which causes the leafdecay code to ignore these leaves. You will have to change/remake the schematics so that the leaves have a param2 of 0.

Btw: I also noticed that the new walls don't seem to have recipes. Or at least the craftguide didn't show any.
the unit of caring

Okay I will add the missing recipes soon. But how can i change the leaves from param 2 to 0?
cdb_xMf8awymgVmp

Can it work with Ethereal at the same time?

I tried it together with Ethereal, but Ethereal overwrites all of my biomes it seems.
cdb_xMf8awymgVmp

Yes it's fiddly you would need to optional depend on ethereal then add trees/plants to specific ethereal biomes as decorations and not register your normal biomes.

I have a partially finished mod pack that does something similar to base MTG biomes.

How can i make them work together?

Yes it's fiddly you would need to optional depend on ethereal then add trees/plants to specific ethereal biomes as decorations and not register your normal biomes.

I have a partially finished mod pack that does something similar to base MTG biomes.

An optional dependency on Ethereal would actually fix this issue. You do not need to change any biome or decoration registrations.

Consider adding the following to your mod, and this should also be done for Ethereal.

Create a new or edit an existing settingtypes.txt file in your mod folder. Add the following code:


In init.lua, add the following code somewhere at the top.

This is a very nice mod, the biomes blend well with Ethereal and valleys_c. Hope the above helps. 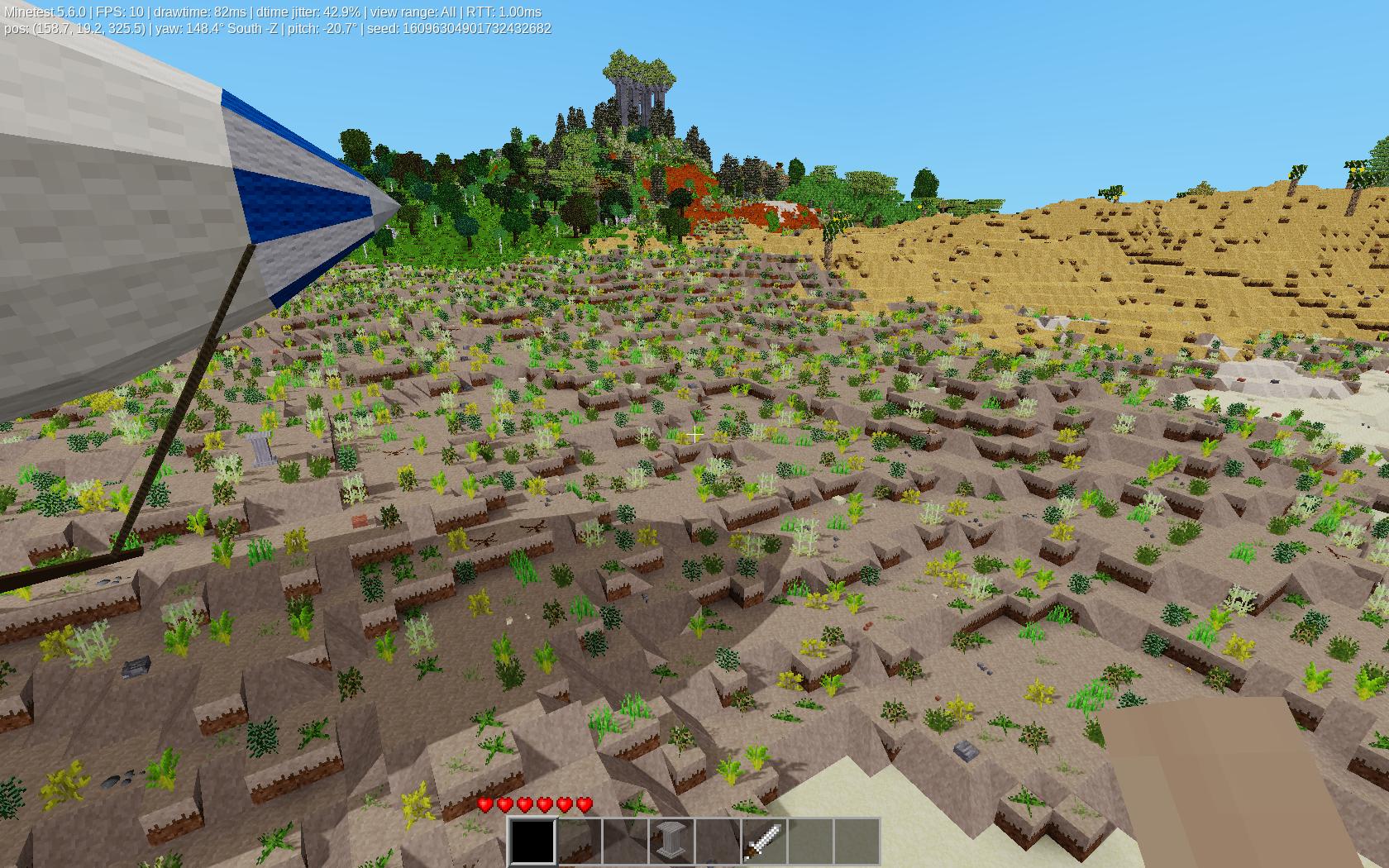 I have added the dependency for ethereal and created a settingtypes.txt with the code and copied the other code in the init.lua, but the biomes still dont appear, only the ethereal ones. I only did this to my mod folder. Do i have to do something in ethereal folder too?
cdb_xMf8awymgVmp

Try setting the three new settings in your mod to true, to clear the biomes, decos, and ores. Do not disable Ethereal. Some map seeds are Ethereal heavy, try creating a world with a different seed, just in case.

This is simply a test to ensure that Ethereal can be loaded as a mod, while allowing your mod to establish its own biomes, decos, and ores.

The screenshots I included were taken just prior to my last post, and through last evening. I've even had naturalbiomes, ethereal, and valleys_c running with my own gal mod. 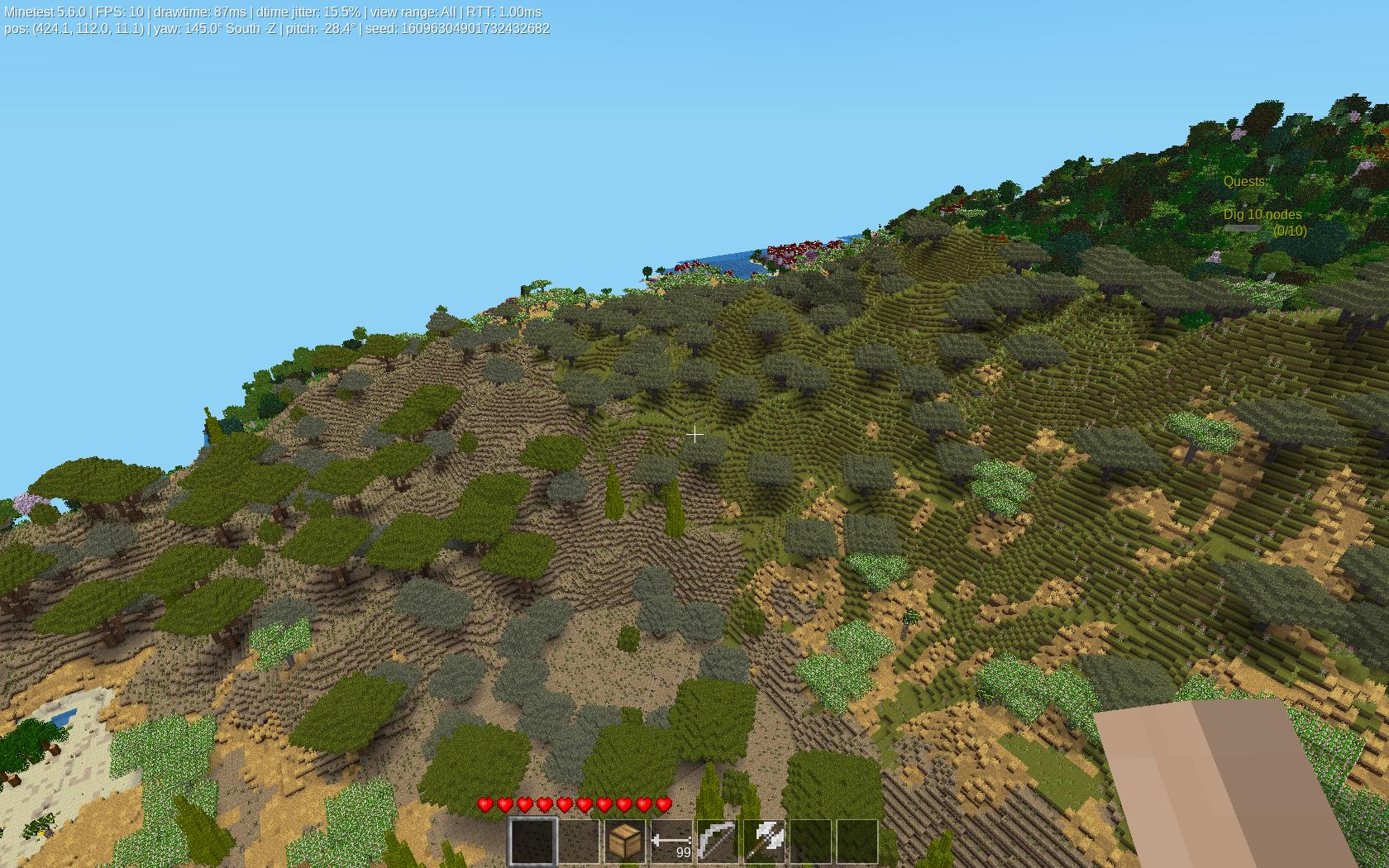 I dont know why it doesent work. I created a settingtypes.txt with the code. I copied the second code into the init.lua at firts position. I added "ethereal?" to the depends.txt
Still not working.Tried different seeds, only ethereal biomes appear. If I only active naturalbiomes and after a while ethereal, I can see how theres a cut in the generating biomes and only the ethereal ones are spawning after activating ethereal.
I also tried only ethereal and natural biomes, no doesent work.
I am using ethereal 1.28 on Minetest 5.4.1
cdb_xMf8awymgVmp

Your mod also includes mod.conf. Set the optional dependency in this file.

You can safely delete depends.txt, as it is no longer used, and will be dropped in some future version of MT.

This conflict between mod.conf and depends.txt is the issue. Once you correct this, you should see the biomes in all their glory. :)

Thank you very much Shad! I added ethereal to the mod.conf and now it works. New version with ethereal compatibility will be available soon.
cdb_xMf8awymgVmp

Thanks Shad and Liil!

I love this mod I just start a public server with Natural biomes and other mods made by you on it!
Post Reply
22 posts • Page 1 of 1