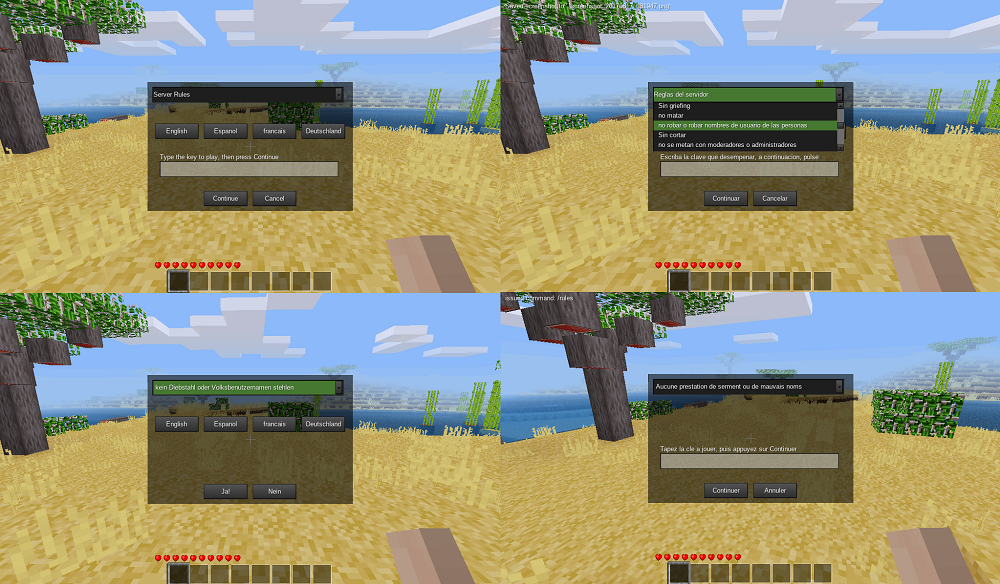 
Now you can skip the cage for new players!

A tiny mod that requires players agree your rules, or be kicked. Yes or No

you can select between to just perss Yes, or to type i agree to the rules (as default)

You can change this in the init.lua file "Enable_type_text_to_accept= true / false"

it appear on players that joins without interact

Type /rules to show the form

english, spanish, french, german translations
change default language or if you want all 4 or only 1 language
Enable_Only_1_language= false
Default_language_number= 1

Blame google translate if the grammatical or spelling is wrong,(I only talking english or swedish)

My english teacher always told me to write complete sentences.
However, you definitely need a label with the question "Do you accept the server rules?".
Look, I programmed a bug for you. >> Mod Search Engine << - Mods by Krock - DuckDuckGo mod search bang: !mtmod <keyword here>

The mod might be very useful for servers. The only trouble is that people who are incapable of actually understanding the rules may be able to locate the "Yes" button and press it. It has happened often enough that players - when asked what the rules are - told that they where unable to read them due to not understanding the languange they where written on a particular server. Thus, it is only a little help, but certainly better than nothing. The greeting message is certainly fine! Real new players might not even know about interact. That gets handled well.
A list of my mods can be found here.

This mod will be very useful for servers where players accepting the rules are given the ability to interact with the environment - such as "regular" servers (where players build their homes cooperating with the community, and griefing is not allowed), creative servers (where players are in creative mode and can build or modify anything they desire without needing tools), faction servers (where players make factions and can only protect a chunk of land if their faction has enough power, which is lost when a member dies), and other servers where rules are necessary (except for chaos/griefing servers, where nobody makes the rules and you "decide your own fate").
I will use this for my server, if I ever get around to being able to host it on a stable machine.

What's the license for this?

Unless nuthing else noted, this is that applies to all the mods I publishing

That sounds like an no-derivitives license, which you're not allowed to post mods under here. I suggest using WTFPL, MIT, or LGPL or later. You can't legally modify the rules or privs with a nd licence. I've made improvements to the mod, which it appears I'm not allowed to do.
Core Developer | Donate | My Twitter | Mods | Mods 4 Android | Node Box Editor | Minetest Modding Book

Licenses for all mods created by me is changed
Last edited by AiTechEye on Sat Nov 28, 2015 13:04, edited 2 times in total.
XaEnvironment Mods content repository

A license such as LGPL, BSD, or MIT require you to keep copyright notices on the file. CC-BY requires attribution, but it's unclear where the credit has to be. I think forum posts and read mes are enough. But cc bywasnt really designed for code.

This would literally take me 15-30m to make. Most of that time on making the formspec look nice. But I didn't, because it saves me time. But I will have to do that if this isn't foss.
Core Developer | Donate | My Twitter | Mods | Mods 4 Android | Node Box Editor | Minetest Modding Book

In MinetestForFun servers we use a mod based on the "interact" mod to do this kind of things, we really impoved the initial "interact" mod.

Looks nice and easy to use !
Thumbs up !

It looks like the "Ingles" button is for spanish, but in Spanish "Ingles" means "English". Did you mean to use "Español"?

i have not seen that, fixed!
XaEnvironment Mods content repository

UjEdwin wrote:Now you can skip the cage for new players!

A tiny mod that requires players agree your rules, or be kicked. Yes or No
(snip)

Blame google translate if the grammatical or spelling is wrong,(I only talking english or swedish)

Is there a reason your own Swedish translation wasn't included?

the idea was to add the 4 biggest languages to make it easyer for more users, but if you think it should be added then i will do it :-)
XaEnvironment Mods content repository

I downloaded, unzipped and placed in the correct path, enabled on my server/level, this mod, but doesn't appear anything on screen... what I wrong?

thanks again for all...

The mod checks, if players that joins have interact.
so if a player not have interact, will the form show up.

many thanks for your suggestions.... but anything is changed....

I added to minetest.conf the line default_privs = interact, shout, home
and tried to enter with another username, but anything is changed....

I did not understand what I should do ...