We're using unifieddyes. I think it's still throwing a palette warning message but Vanessa didn't think it was a big enough deal to fix. No crash errors, anyway. Someday, I'll probably look into it and see if I can't get rid of the warning, but not today.

Sorry it took me forever to respond. I added the Unified Inventory Plus but still got this

In game, all I did was open inventory to verify backpacks were there. Must be some other mod causing problems.

[EDIT]
Actually, why don't you pull a fresh copy of backpacks. Line 84 is only coordinates of a nodebox. There's no reference to "dye" at all.
[/EDIT]

Would you be referring to the bag that's built in to the minetest game? Because I wanted to also have backpacks that I can physically place and store in my inventory and chests.

I was a part of the "everamzah" organization to retain URLs that taikedz created, thank you -- but I think I left that group for whatever reason, and can't push there? I'll check, and ask, and see what happens.

Most likely, though, I'll push whatever updates to github.com/jastevenson303/backpacks when I'm done. The version I use on Lavaland places and digs anywhere, ignoring protection. Another version allowed to open the backpack an additional way, by swinging it in your hand, but was a little prone to bugs.

I'll reply when I'm finished and I've published any changes. I, too, like to have a backpack that isn't a part of the player inventory, but instead part of the in-game world. Original, years ago when I created the first version, I gave the player an 8*1 hotbar-only inventory and a backpack. The backpack was the lower 8*3. When you removed the backpack, the lower 8*3 inventory remained with the backpack. Changing backpacks would change inventory. The idea was to incorporate this into the player model.

Sadly, I haven't revisited that idea in years. Thanks for the interest,
James
https://youtu.be/BlXk48hZbc0

Would you be referring to the bag that's built in to the minetest game? Because I wanted to also have backpacks that I can physically place and store in my inventory and chests.

backpacks.png
Backpacks
(37.38 KiB) Not downloaded yet

This is what you mean, right?

Jas, your version has dye.dyes, but on line 86. I don't think that's what he's running, either.

Yess! Thats the picture and yes I just used the link to the backpack you posted and it loaded straight through
https://github.com/jastevenson303/backpacks
I haven't crafted it yet in game but I'm sure it works. If you do happen to make or know even more ways or ideas for backpacks i would love to see more but this should be efficient enough for me.

I have two other questions

1 If you guys have any other ideas for mods related to camping can you point me to the right direction for them, i found something close to a tent (indian teepee) and a bonfire but is there some of these items around?

tent
makeshift items for survival
sleeping bag
perhaps something cool like a lean to shelter like this:
https://www.bushcraftspirit.com/wildern ... helter.png

2 If I ever come to an error that says "a nil value", is there a way I can fix it? And how do I find the line its asking for because I dont have any program and notepad doesnt show the exact line

Thank you gus for your time and patience

I used viewtopic.php?f=9&t=11517 a long while ago, and always remembered it. It's called Survival, by NathanS.

All I did was put a local copy of dyes.dye, pretty much. The version on Lavaland has an 8*3 inventory instead of 8*2, and the backpacks can be named. I didn't have it in me to add those features here. I figure the inventory size might benefit from a variable setting.

Sorry for all the versions.
https://youtu.be/BlXk48hZbc0

DreamGuardian wrote:2 If I ever come to an error that says "a nil value", is there a way I can fix it? And how do I find the line its asking for because I dont have any program and notepad doesnt show the exact line

If you are on Windows, I recommend Notepad++. Has all the features I want, plus it has search in files, so if I want to see an working example of something I can't get to work, I need only search the entire mods folder. Someone will have used it correctly. Nice feature. Used to be easy, starting with DOS 2.1 or so, but for some reason, MS decided to take find away.

But finding a nil value error means some variable didn't get properly initialized. Something wrong in the code, in older code, often a deprecated function that got fully phased out or someone renamed a node or something. Not that learning scripting is hard, just that it's almost always more than just going to that line and changing something.

Incidentally, one of the kids did some standalone code that makes backpacks function like regular old chests when used with hoppers. It's easier to add the single block of code into the original mod, sure, but if it's no longer being maintained... Anyway, if you would like to try it, I'll push it to my git.

jas, thanks for that. One of my coders wants to make a larger backpack. The idea is put your backpack in the middle square and surround it with 8 of the correct color wool and it becomes an 8x3. Further upgrades possible, so far as I know. Interested in a PR when it's done?

[EDIT]
Ooh, coding it both ways, letting the user change the size via settingtypes.txt OR defining new larger backpacks would be a good exercise. Think I'll recommend it to him.

Re: naming bags, are you talking about the same way that Shad changes the "name" of tools in his lib_trm or something else?
[/EDIT]

I am interested in PRs for sure. Submit them and there's a 99% chance it'll get merged, mainly because I don't use that mod and haven't maintained the repository. 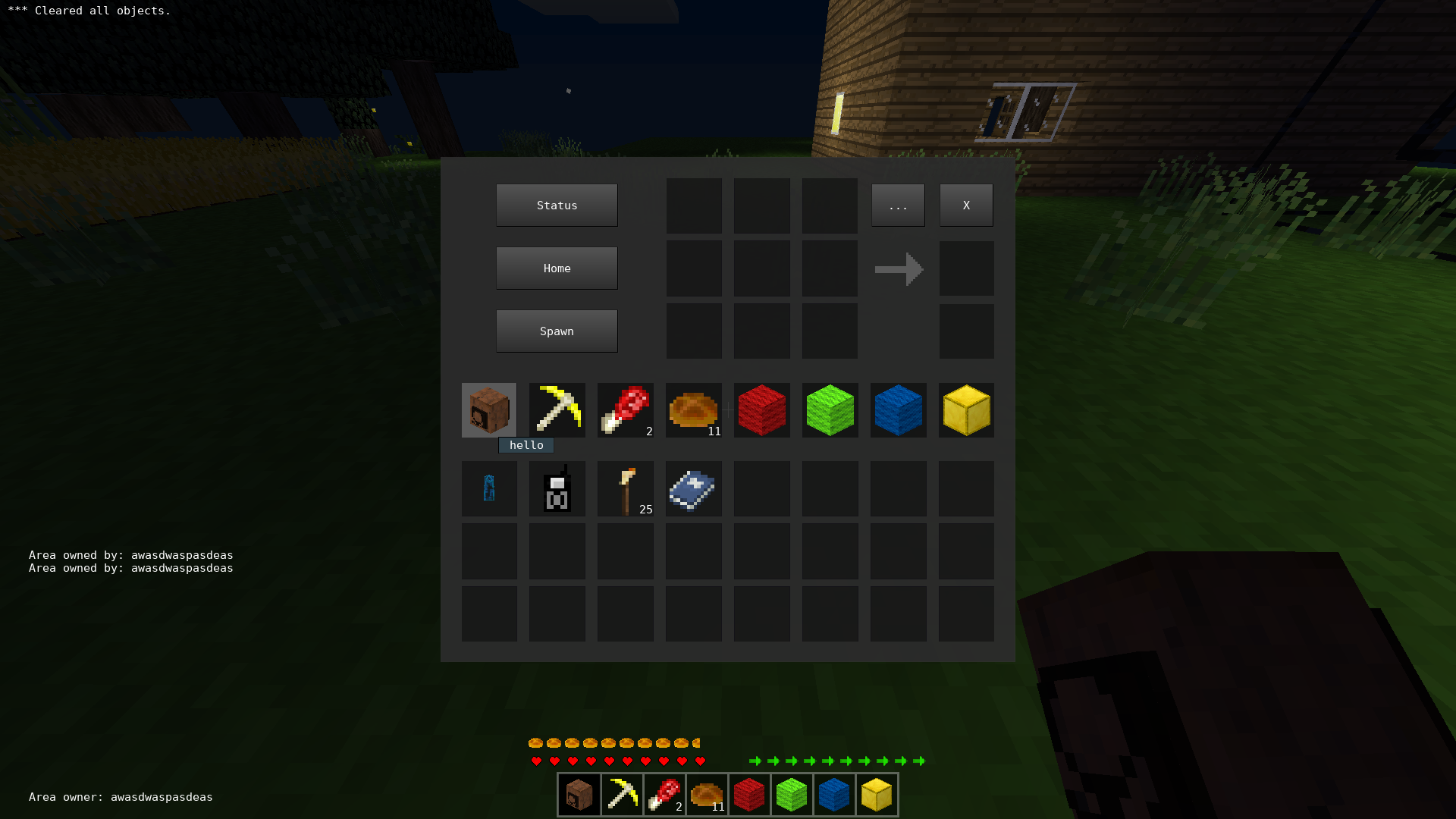 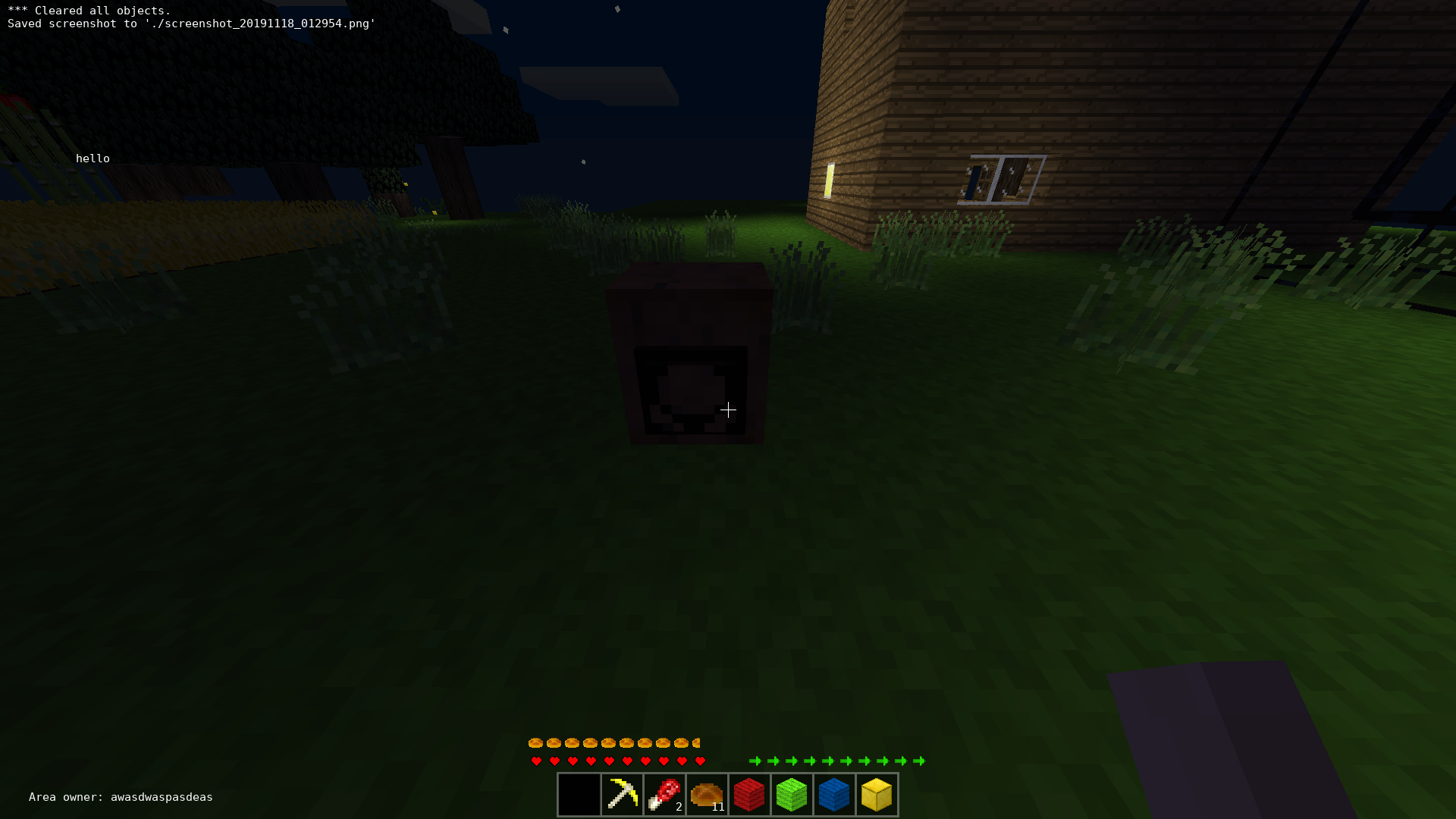 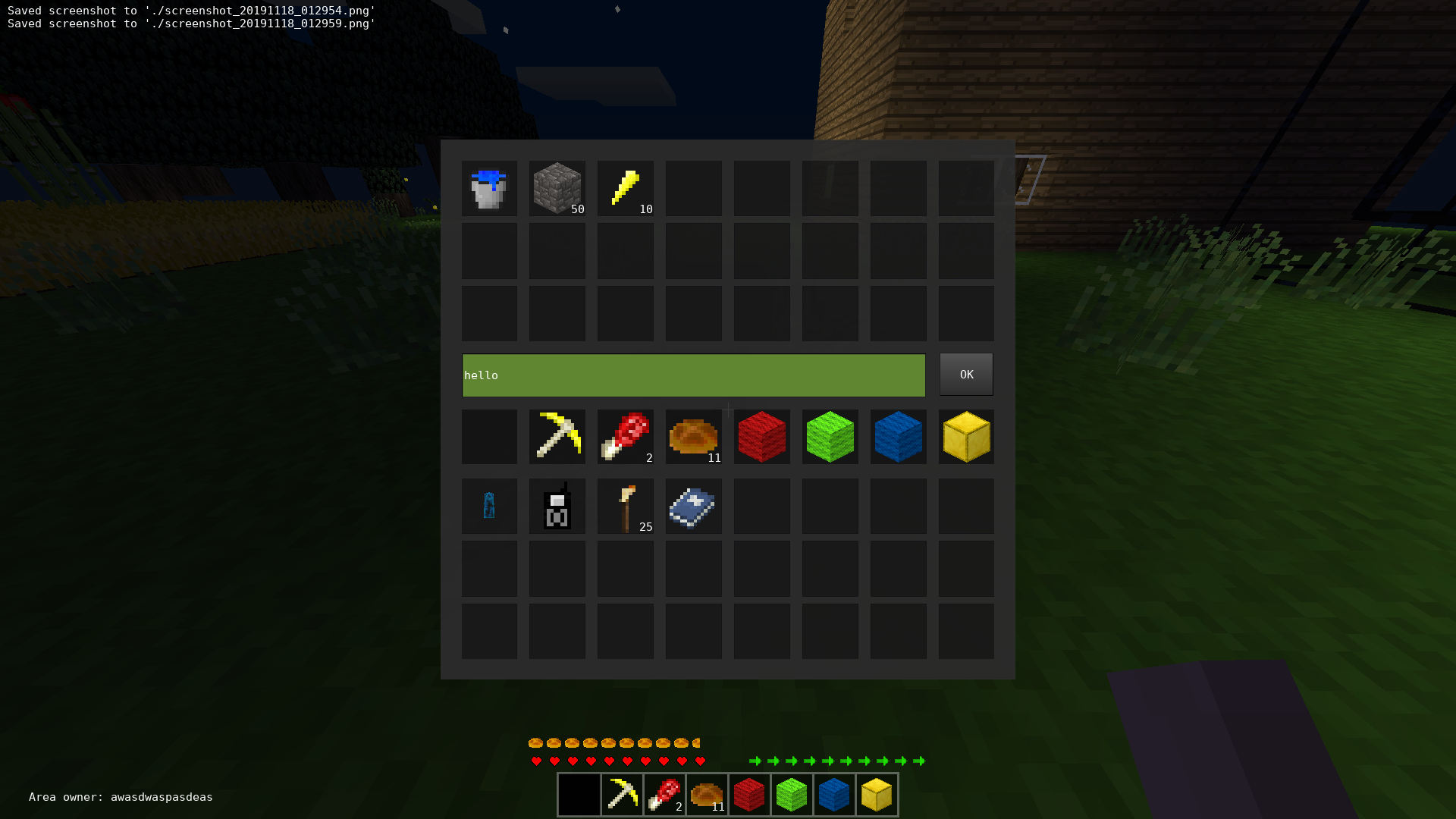 Oh, thanks! I'll pull that so he can take a look. A named backpack is a good thing. In fact, it might be a good codeblock to add to chests...

Quick question. Is there a reason your fork requires something to be directly under the bag, while the everamzah does not? One could place the everamzah backpack on the front of the window or mese lamp in your first screenshot, for instance, while the jas backpack would have to be placed on the next tile down, so its base is resting on the solid dirt node. A realism thing, or are there circumstances where it throws errors or what?

Lavaland backpack is checking that its replacing air, and not some other more important node. It is weird. The idea anyway was simply to allow the backpack to be dug and placed anywhere regardless of protection. In the Glitchtest version, the backpack respected protection, and to allow players to access the backpack in protected areas, I added an on_use action that opened the bag when you swung it. Hecks, I believe at the time, informed me he was able to lose items with this version, so I didn't keep it in lavaland.

if i understood correctly, your request would be against the main point of this mod, no? xD
it works more as portable chest than a inventory expansion

Is anyone else having trouble where if you send another item (the one with the shift+click) to the backpack when it is already full it still gets send, but to oblivion...

These backpacks are overpowered, you can take 32 backpacks in your inventory, having a total of 512 slots, maybe it is better to limit them to only one in the inventory at the same time.
FreedomTest hardcore anarchy server

Minix wrote: ↑
Sun Feb 28, 2021 02:03
These backpacks are overpowered, you can take 32 backpacks in your inventory, having a total of 512 slots, maybe it is better to limit them to only one in the inventory at the same time.

Well, it is possible, but in personal use, i only use one for each color, or else the organization becomes a hassle.

I really like them though, I will probably inspect the code to implement something like only one bag per player at the same time.
FreedomTest hardcore anarchy server

Minix wrote: ↑
Sun Feb 28, 2021 02:03
These backpacks are overpowered, you can take 32 backpacks in your inventory, having a total of 512 slots, maybe it is better to limit them to only one in the inventory at the same time.

Well, it is possible, but in personal use, i only use one for each color, or else the organization becomes a hassle.

I agree with Ignaramico. I seldom use more than 4 backpacks. In practice it slows down playing too much using too many backpacks. I think everybody should decide himself how many backpacks he wants to use. I am not a friend of a programmatical restriction.
Post Reply
43 posts