This is a mod for Minetest Game which gives you more stuff to build by adding various simple decorative blocks, stairs, slabs, doors, panes and other items.

Long description
Themes include: All additions are closely related to Minetest Game's existing items. I also try to keep compability with other (similar) mods and to minimize redundancy, so it should be relatively safe to install this mod.

All items can be crafted. Use a crafting guide mod to find out how.

+ Spoiler
Ideas for more decorative (!) blocks, doors and other stuff are very welcome. The more related to Minetest Game they are, the better. This includes: I prefer “obvious” and/or simple additions over far-fetched or complicated ideas. I also try to not repeat things added by similar mods like moreblocks or xdecor.

Thanks so much for making this! Also thank you for being willing to entertain ideas, I'll have my students come up with a list on Monday. I love the Papyrus house so much, that's great! I'd love to see them making those in our survival mode and maybe even mudbrick huts or something. Take care and I'll definitely be keeping my eye on this mod.
-Mike
Become A Real Life Superhero - http://SuperheroHill.com
Project Lead of the Doom 3 Mod Last Man Standing - http://Doom3Coop.com
Project Lead of Platinum Arts Sandbox Free 3D Game Maker - http://SandboxGameMaker.com
Youtube Channel - https://www.youtube.com/user/PlatinumArtsKids

TheReaperKing suggested “mudbrick” and I think this is a nice and simple suggestion. So: 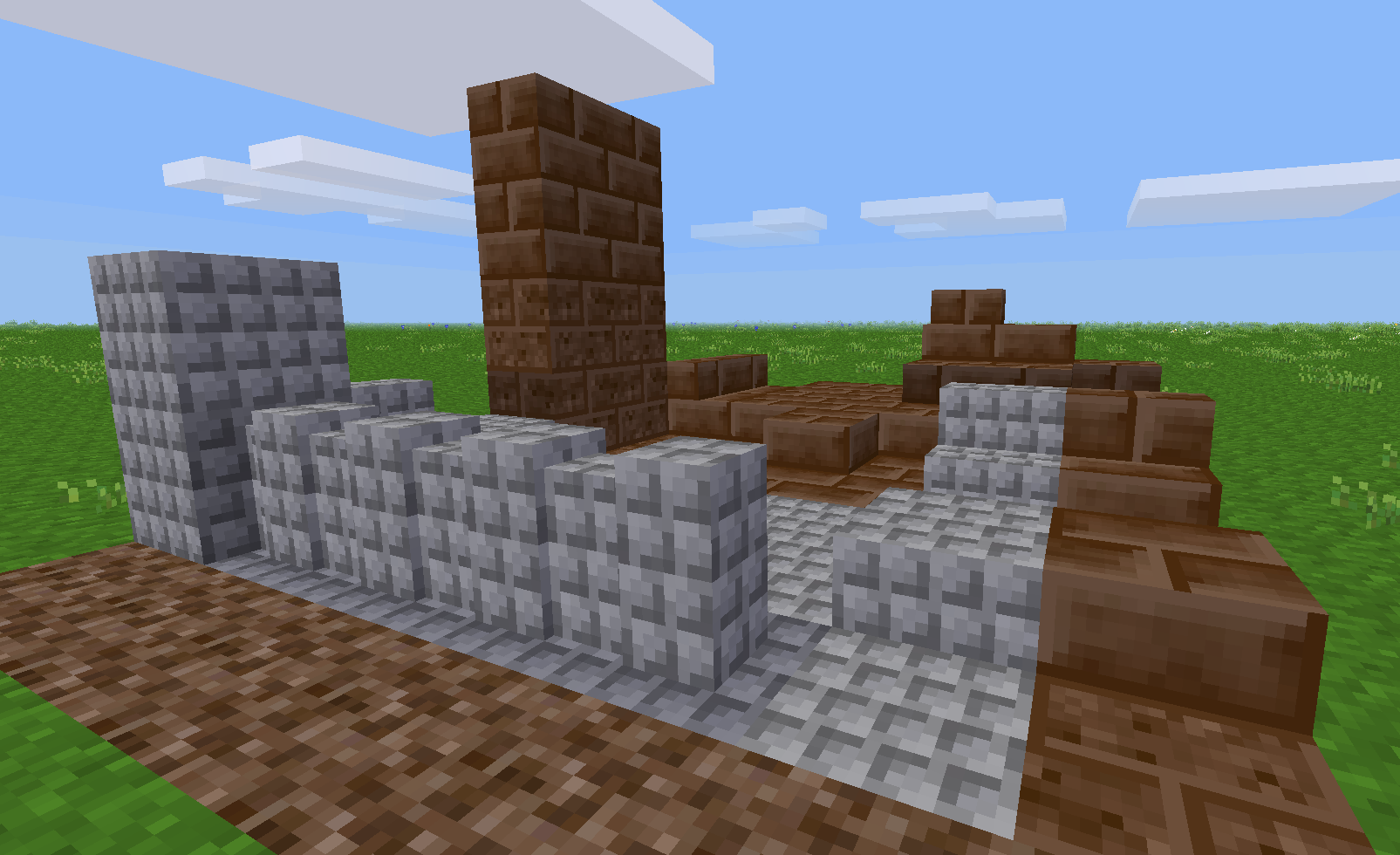 Version 0.2.0 has the following additions:

You can grow saplings on the dirt bricks and the gravel dirt.
My creations. I gladly accept bitcoins: 17fsUywHxeMHKG41UFfu34F1rAxZcrVoqH

nice! i like it.
Note that I've recently renamed myself on github and co. to "Desour". (I'm bad at naming things.)
Feel free to call me DS.

After updating I'm having this crash

Strange, I can't see an error in this line. My first guess is that your furniture mod is outdated.

Note that for my mods, the Git version is never officially supported, so bugs are to be expected. If it doesn't work, just stick to the latest official release of Minetest Game Plus, which is version 0.2.0. Version 0.2.0 does not include furniture.
My creations. I gladly accept bitcoins: 17fsUywHxeMHKG41UFfu34F1rAxZcrVoqH

You were right! I updated the furniture mod again it worked, thanks so much! I'll keep that in mind in the future with the git version, thanks again.
-Mike
PS I did disable it and update it again while updating the furniture mod so I guess I don't know 100% if that is what did it but at least it works!
Become A Real Life Superhero - http://SuperheroHill.com
Project Lead of the Doom 3 Mod Last Man Standing - http://Doom3Coop.com
Project Lead of Platinum Arts Sandbox Free 3D Game Maker - http://SandboxGameMaker.com
Youtube Channel - https://www.youtube.com/user/PlatinumArtsKids

Looks like you are using an old version of furniture that does not have stone furniture.

How about gold leaf engravings? This could just be a sign with a transparent background and gold coloured fake text.
Like this: May not look as nice with 16x textures though
Avatar by :devnko-ennekappao:

Looks kinda ugly if you ask me. :/ I like new things making use of gold but it should look nice. I also don't really know what exactly you're proposing here.
My creations. I gladly accept bitcoins: 17fsUywHxeMHKG41UFfu34F1rAxZcrVoqH

Gold leaf writing, as found on gravestones or some fancy signs.
I tried 16x textures, and I agree it doesn't look great.
Avatar by :devnko-ennekappao:

I think this would be more suited in a graveyard-themed or signs mod. Writing on the wall implies that there is readable text, like on Minetest Game's signs. Implementing signs or something like signs is out of scope for this mod since signs are not trivial and Minetest Game has no API for adding signs.
And just putting a fuzzy writing on the wall with no actual readable text just seems wrong to me.
Sorry, I reject your particular suggestion.

Note I may be more open to other “gold leaf” ideas for lightweight decorations.
My creations. I gladly accept bitcoins: 17fsUywHxeMHKG41UFfu34F1rAxZcrVoqH 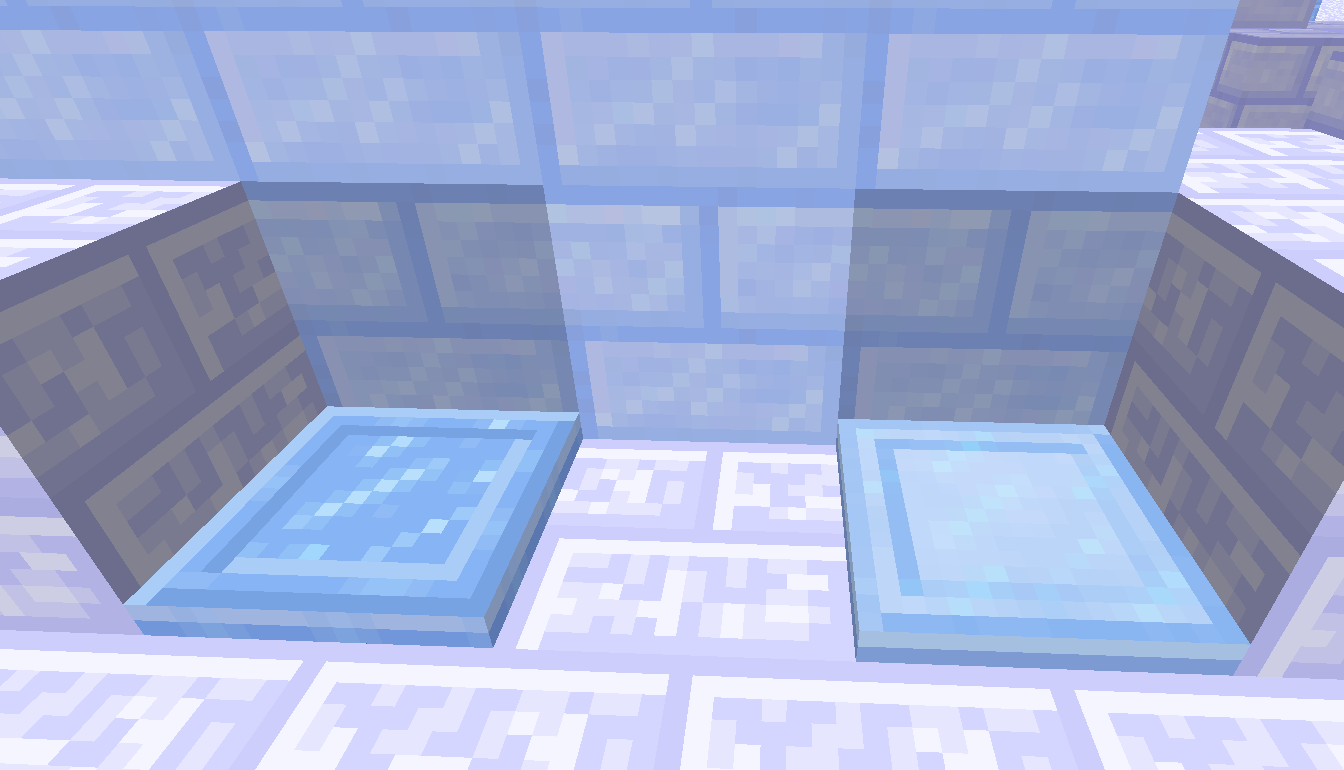 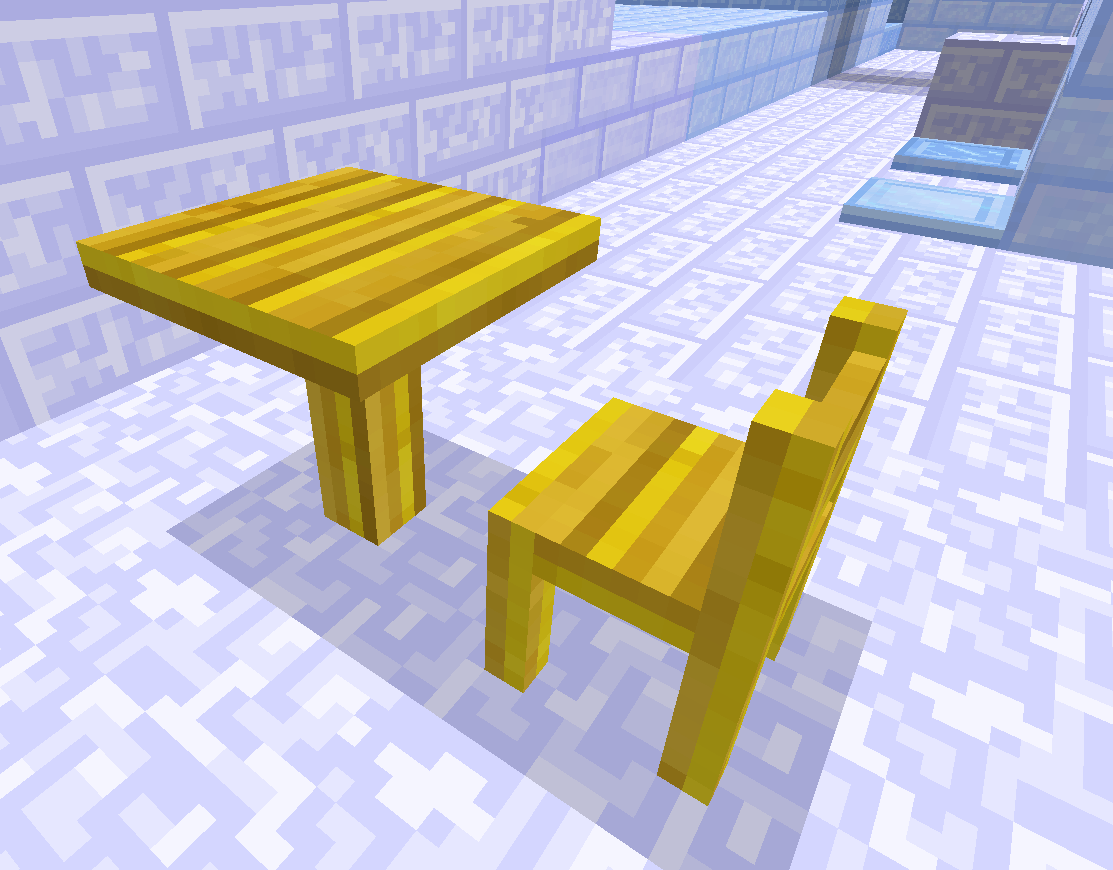 This update includes a few new blocks and many gameplay changes:
My creations. I gladly accept bitcoins: 17fsUywHxeMHKG41UFfu34F1rAxZcrVoqH

I think there is too much gold for my taste. And also too much snow/ice. Somehow, the palette doesn't work for me (mostly). Some blocks are nice (i.e. that sandstonecobble for the paths, and of course the papyrus block), but...somehow...the gold hurts! Yellow is nice as a color, but...a bed out of it? *running away screaming* :-)

Simplicity is a fine goal. The best blocks a mod can come up with are those that can be used for a wide variety of usages. A stair can be a stair, a roof, a chair, armchair, part of a structure...But in order to achieve that, the textures need to be sufficiently universal, and the colors have to fit. Moreblocks does a very good job with its blocks. Most of them are rather greyish, which does fit well to houses. I love the baked clay mod and its colors and texture.
A list of my mods can be found here.

The reason why there are so many gold blocks is because the plain Minetest Game has very little uses for gold. So I decided to add more uses, and the most obvious use is excessive luxury. XD There are also some more absurd luxuries, like the gold bed, but luxury is always a little bit absurd and excessive. ;-) So this is intentional.
Snow and ice stuff was added because I felt a need to build great ice castles and igloos. The ice blocks also differ in hardness and in whether they let light through. And I really do think that all snow/ice blocks serve a purpose. I also consider the ice/snow theme to be finished, I will probably not add more blocks to this theme.
I think the problem is not actually too much gold, ice or snow, but too little of everything else to “balance it off”. I really feel there could be more stuff in the papyrus theme, but I ran out of ideas. One idea posted here was a papyrus fence, and I think a papyrus trapdoor might also work, but then I am really out of ideas.

Also, I am probably not removing most blocks because players always have the option to not use them. :P

I don't understand at all why you have problems with the palette. I am using mostly the colors of Minetest Game: gold textures use exactly the colors from the gold block, and snow and ice textures use exactly the colors of snow and ice. Are you using a texture pack or the developer version? In the developer version, the snow texture was changed. Which really pisses me off since it took me quite a time to make my textures work out nicely with the 0.4.14 snow texture, and I have to probably redraw them all again. X_X
But if you're using a texture pack, just ask the texture pack author to add support for this mod. :P I won't probably change the existing blocks that much anymore. My next major goals with this mod are testing, writing item documentation and translations and releasing. After that, I might add more trapdoors.

I might consider splitting this mod into multiple “themed” mods (one for ice, one for gold/luxury, one for papyrus, …) when it exceeds a certain size. But for now I think a split is probably too early.

“Universality” was not really a goal, and yes, not all blocks can be used in all contexts, since most blocks follow some theme. Also, I dislike the stair abuse. :P This mod adds stairs and slabs nonetheless.
But if you do have an idea for an unique new block which fits to the theme of Minetest Game AND it has not already been added by another mod, I might add it.
But avoiding redundancy was a goal with this mod: You won't find a gold door in this mod since ts_doors already adds one. You won't find wooden tiles in this mod since these are already very well covered in [xdecor] and [moreblocks].
Another goal was exploring the API features of Minetest Game: That's why you find many “standard” things lik stairs, slabs, doors, trapdoors, fences, walls, etc.

By the way, this mod is pretty much compatible with More Blocks. It already adds some cool blocks, and I certainly won't repeat them. You can use both mods just fine without duplicates/errors. I even added a few crafting recipes which use recipes from More Blocks. For example, you can use the sweeper to clean the dirty glass. :-)

Overall, your criticisms are too vague for me to convince me to remove any block right now. The gold bed is here to stay. :P But yeah, maybe it could use a better texture and/or mesh. Especially since it is supposed to be a luxury, it should not look like shit. Adding good new beds is harder than it seems.
If many people think a particular block is too terrible and they have a good reason, I might consider removing it. I might also consider removing things which are too superficial or redundant with other things. I am personally not so happy with the white bed; the main reason it was added is to add a bed craft which does not require any dye. As a decoration, it's not so great and might be better in a different mod.
My creations. I gladly accept bitcoins: 17fsUywHxeMHKG41UFfu34F1rAxZcrVoqH

The long overdue version 0.4.0 has arrived! 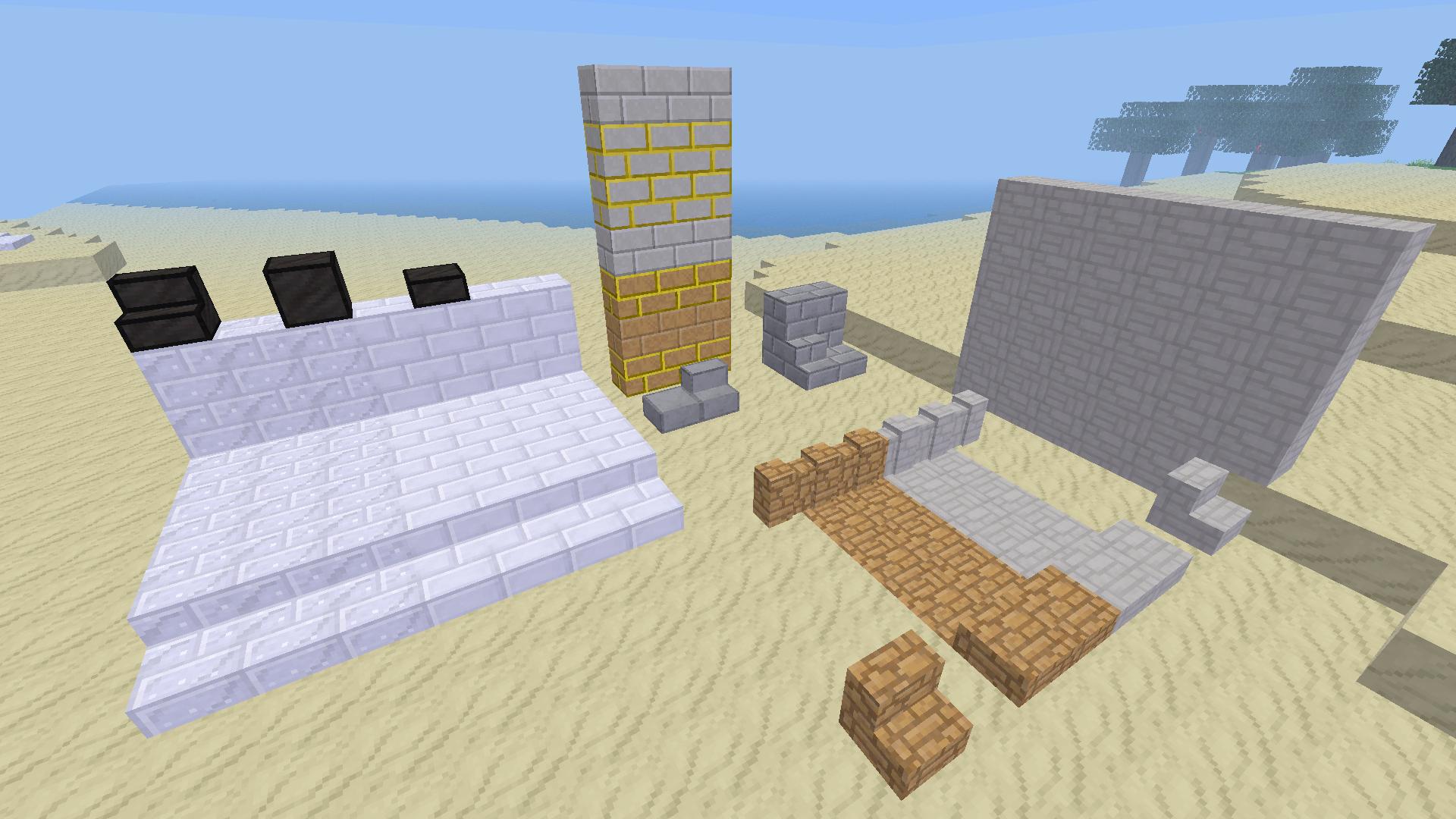 Updates:
Feedback will be appreciated! I like to see whatever you built with these blocks.

I have decided I will not shy away from removing blocks if there are many players who dislike them, in order to only ship quality blocks.

This mod is moving slowly, but closer to version 1.0.0.
My creations. I gladly accept bitcoins: 17fsUywHxeMHKG41UFfu34F1rAxZcrVoqH

How about larger sized bricks (bricks the size of stone brick?)

I have no idea what you're talking about.

A proof of concept for your ideas be nice, because I don't seem to understand them.
My creations. I gladly accept bitcoins: 17fsUywHxeMHKG41UFfu34F1rAxZcrVoqH
Post Reply
43 posts