This mod adds a little more life to the otherwise relatively plain deserts. Currently it includes a prickly pear and barrel cacti, but I do plan on adding more flora as I have time.

If you are playing with tenplus1's mob api you will also see ostriches popping up in the deserts. Again, I plan to add more animals as I get time. 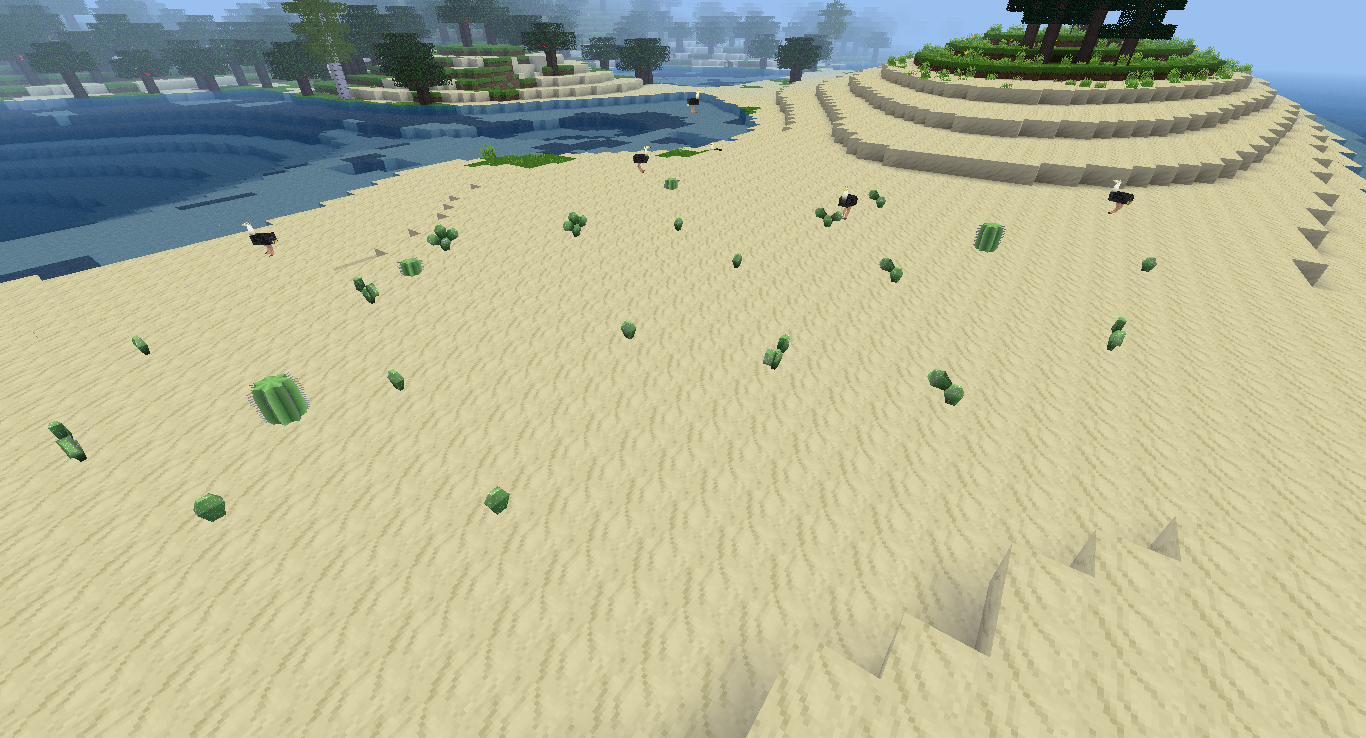 yes, I know this isn't a desert, I manually placed the cacti and ostriches, as after flying around for 15 minutes I couldn't find a desert.

License on models and graphics CC by SA 4

nice mod been using it for a while before ostrich added. Even before ostrich had to strip some code to avoid crash.
Here is crash i get with unedited code

Hmmm, that error doesn't make sense, it would appear as if a cacti is trying to spread into a location where there is no node. I added some code that should catch the problem, and just print an error message to the debug.txt I ran a test and did see that message popping up a few times, will have to try to figure out what it causing it.

By reduced spread do you mean slower spreading, or that they only spread if there is less than a certain amount in the area?

I could probably add recipes to turn the cacti into dye, should be easy to do.

I'm not entirely pleased with how the pad harvesting works right now anyway, so I do need to work on that. Not sure if I can make it need the tools, as I think the tools would need to have the code, but will look into it.

I thought about adding fruit to the prickly pear, but that would require new meshes, and a bunch of new models, which wouldn't be hard to do, but I didn't feel like it was worth it. I do have support added for mymonths, and they flower during certain parts of the year, I could make it so if they are harvested while flowering you have a chance to get cacti fruit.
I record Minetest videos, Mod reviews, Modding tutorials, and Lets plays.
Check out my website, and brand new Minetest Modding Course

Reduce spread like less in certain area. I like the extra desert foliage but think should still be sparse like dry shrub distribution
Server Owner trainwrecktony.serveminecraft.net:30000 irc.freenode.net ##minetest-trainwrecktony

I thought that is what you meant trainwrecktony, so I started work on a change to the spread function that will keep them from being so dense, should have more open areas now, well once I update. I got that error you mentioned a few times, but for the life of me can't figure out what is causing it, trying to debug it now.
I record Minetest videos, Mod reviews, Modding tutorials, and Lets plays.
Check out my website, and brand new Minetest Modding Course

Okay, so still no idea why that error exists, but I added some code to catch the error so no more crashes. :)

As mentioned previously I added code to keep the plants from spreading so much, the attached picture is an area that had some cacti naturally spawn, and they were spreading for about twenty minutes, with the ABM rate and chance set to 1 rather than 40 and 30 so it was WAY faster than you'll ever see in game. Seems to work pretty well in my opinion, still paths that can be walked through. I'll work on the harvesting in the next update.

Code has been pushed to Git so pull/clone and have fun!

Pushed another update, not too much of a change to game play, the barrel cacti now spread a two nodes away from the parent plant, so you won't get solid walls of them, well shouldn't anyway.

On the backend I made the plant_spread function a little more customizable, plants can now define how far the children should be placed from their parent, and they can vary how much air is needed for the child to be placed. This is useful if you want to allow a plant to completely take over an area, or if you want it to be more sparse on the landscape.
I record Minetest videos, Mod reviews, Modding tutorials, and Lets plays.
Check out my website, and brand new Minetest Modding Course

Rats already exist in the mobs_animals mod, but camels and snakes are good ideas, will see about adding those in the next few weeks.
I record Minetest videos, Mod reviews, Modding tutorials, and Lets plays.
Check out my website, and brand new Minetest Modding Course

There is a snake in nssm as i remember.
My Mods:

Fixed those errors echosa, feel free to pull or download a fresh copy to resolve them.

mahumutelmas06 nssm does have a giant sandworm, not sure if there is a normal viper type snake that isn't giant.
I record Minetest videos, Mod reviews, Modding tutorials, and Lets plays.
Check out my website, and brand new Minetest Modding Course

Can you please add prickly pears?