I ran into the following error using the current master branch:


As a temporary measure I've reverted to Tag: 1.0.0-alpha-1 - but it hasn't been long enough to know if it will crash or not yet.

Thanks very much for an amazing mod!

Hi scr267, branch currently is a mess, due to a lot of changes I've been doing, so I wouldn't go about using it now :)
However, feel free to use alpha1, which is the latest stable version.

I will also take a look at this error and see what is causing it.

Thanks! Hope you enjoy the mod... also for sure much better things are coming soon!

Is this mod dead? I hope not. I have been waiting for it to become stable and not crash.
My modding team: https://github.com/basilea-rhomaion

Diamond knight wrote:Is this mod dead? I hope not. I have been waiting for it to become stable and not crash.

I doubt it, but his last update/commit to the mod was in June. advanced-npc github.
Give a man a fish, feed him for a day. Give a kid a fish, it's going to die.

I'm using this mod. Soon I will expand my project of mod societies, whose behavior of NPCs is realistic thanks to this incredible mod.

can you list me advanced_npc's item string? I need it for /giveme

BrunoMine wrote:I'm using this mod. Soon I will expand my project of mod societies, whose behavior of NPCs is realistic thanks to this incredible mod.

If you can merge Advanced_NPCs with Societies, I'll TAKE it! :D
Trust and Honesty are necessary conditions for friendship. (Princess Celestia)

I have a problem and I can’t figure out how to resolve it, there is no villagers, they never spawn, I let the server and the client running for more than an hour and nothing.
I check the code and I found something weird, inside the on_timer event (spawner.lua file) there is an If checking the variable mg_villages_entity_name, here is the code

Even I found a setter function but is never used, so the variable is nevet set and the If does nothing and no villagers spawn.

Any idea?
Best Regards and Thank you in advance

Zorman2000s last git commit changes this mod. This mod is now ONLY an API.

If you search Zorman2000s git, you'll find a repository for mg_villages_npc, which is the actual NPC mob.

You must install both to get the mob NPC.

Silly me, I never notice what you say, I'll test it tonight.

Thank you a lot.
Best Regards

I test the mg_villages_npc and I've Villages, thank you ShadMOrdre.

Now I have another issue with the villagers, all of them are render below the ground, see the attach.

I think that the problem is related to the collisionbox and the position to render the model, somebody can help me?.

Best Regards and Thank you in advance.
Trungus

Hi, why I cannot see the egg "npc spawn" in the video at start of the thread?
Thanks for reply.

Great mod !
But is there anybody still on it, or is it dead already ?

Big project here :
I work in a fablab, and we kind of team up with schools to offer activities to children in both Minecraft and the real world. They go through various quests and have to switch between the game and other places to interact with (museums, historic spots... you know, various cultural places). We were using BetonQuest for Minecraft with some Arduino stuff and it was working fine.
BUT NOW we have to switch to Minetest (whatever is the reason, it's a good one).

SO :
I am thinking about using AdvancedNPC in combination with E.P.I.C. (https://content.minetest.net/packages/B ... nzay/epic/), as a replacement for BetonQuest.
In particular, BetonQuest allows the use of NPC dialogues to walk through the steps of a quest, which is pretty much what we want from an RPG-like quest system.
Since AdvancedNPC is one of the rare mods (if not the only one in the ContentDB) to include dialogues with NPC, I think the potential is huge.
E.P.I.C. is a quest framework that uses right-clicks on various cubes as triggers for quests progress. It's more basic than BetonQuest, but it seems clean and stable (see "Damocles" server for quick playable examples of use). I haven't seen the full potential of it, since there are many different cubes (will do this today). But if a right-click on a cube executes a command, that could be an opening for anything new (triggering NPC dialogues, hm?). I will try to get in touch with them as I did here.

We already have several quests for BetonQuest in .yml (using dialogues), plus all the arduino stuff plus a plugin for holocaustin... local-hosting all of that.
I just need to know if anybody's still there to eventually help on adjustments with the mod, just in case it's required (it probably will be).

Diomède wrote: I work in a fablab, and we kind of team up with schools to offer activities to children in both Minecraft and the real world. They go through various quests and have to switch between the game and other places to interact with (museums, historic spots... you know, various cultural places).

Sounds like a lot of fun. Could be of intrest for more...er...more...adult..."kids" as well :-) The RL interaction might be a bit problematic due to players beeing placed all over the world.


Diomède wrote: We were using BetonQuest for Minecraft with some Arduino stuff and it was working fine.

I don't know about BetonQuest, but I've been to an MC server once which had some "quests": When right-clicking a mob, he was showing an inventory (the villager trading one afaik), and on mouseover, diffrent inventory items offered diffrent options to reply to the npc. The inventory items/options could be clicked and the quest would go on. Is that like it?

Some time ago, a great feature has been added to MT so that better formspecs can be created that don't look too bad. If you know the point&click adventures of old...that's what I have in mind there: 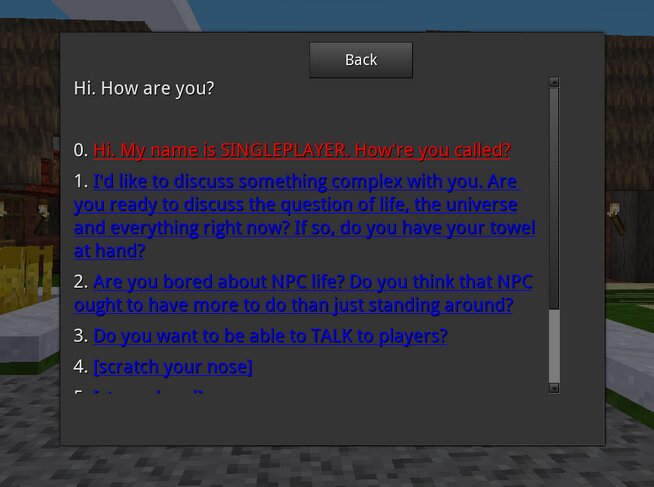 The basics are doable - show some text and offer "links" that can be clicked on and reacted to. And of course npc can react to right-clicks. It "just" needs a bit of a programming language for writing dialogs and a lot of eye candy and effort put into graphics so that it looks good. Might be great to see a screenshot of the npc who hands the job out as well. I don't have much time right now but plan to do something in the area of a small language for dialogs. I'm not good at all at the necessary eye candy.


Diomède wrote: We already have several quests for BetonQuest in .yml (using dialogues), plus all the arduino stuff plus a plugin for holocaustin... local-hosting all of that.

Well, then you already have a language for the dialogs and just need to implement that in MT plus add the necessary graphics. Ought to be doable, though I don't know what other features BetonQuest has. You're not necessarily dependant on one particular mob mod.