+ Spoiler
I thought it was time to release this small project of mine that i've been working on for a few days now.
This might be, or might not be a finished mod though, it might seems a bit empty and simple.
Anyways, i didn't plan on making it very big, so here it is
WARNING: This mod is under heavy development, older versions are incompatible with the newer ones!

General Description
It adds tools, decorations and two armor sets
Amber can be found in amber trunks, and as sediment in dirt, also mud if you have darkage mod.
It can be also found in the root system, like many other stuff. Tool Set
Basically your ordinary steel set but its effectiveness scales with node's hardness.
The tool's textures were designed by me, and I tried to make them different from the default ones, just to bring more diversity to the game.

Ancient Tools
These are the elite tools obtainable only by finding the respective tool matrices. They are a bit stronger than diamond and mese ones, and last longer. Though you'll probably found about 3 of them in your whole lifetime, cause of their rarity :)

Armor Set
Lighter than the steel armor, also can withstand more damage.
Even though armor pieces look like all other armor pieces do, I took the chance to design an unique shield for the set :) Ancient Armor Set
This is *the* strongest armor in the collection. Apart from that admin armor, but that one really is an overkill.
This armor is crafted using the armor matrices which are, like the tool ones, hidden across the underground.
Armor is a bit stronger than the diamond and the mithrill one, and gives more heal.
(Look at that evil scarab shield, isn't it cute?) Additional info on Ancient stuff
Matrices which are used in crafting of these overpowered tools and armor pieces are found in the underground, starting below -2048 and going down to the end (void).
They are basically a set of tools and materials which you need in order to enchant your tool/armor piece, but since I don't want to make this mod more complicated, they are not being opened and you just craft the tools using them. Simple.

Interesting thing is, you can't craft any armor/tool with any matrix. Each tool/armor piece has its own matrix which is used in crafts, which even more lowers the chance of you finding the one you need :) Decorations
The decorations are bricks and blocks, also two glass types.
I also added some more decorative nodes that are marked as "Decorative [nodename]", these don't have any other use except for decoration, yet.
Glass Types
+ Spoiler 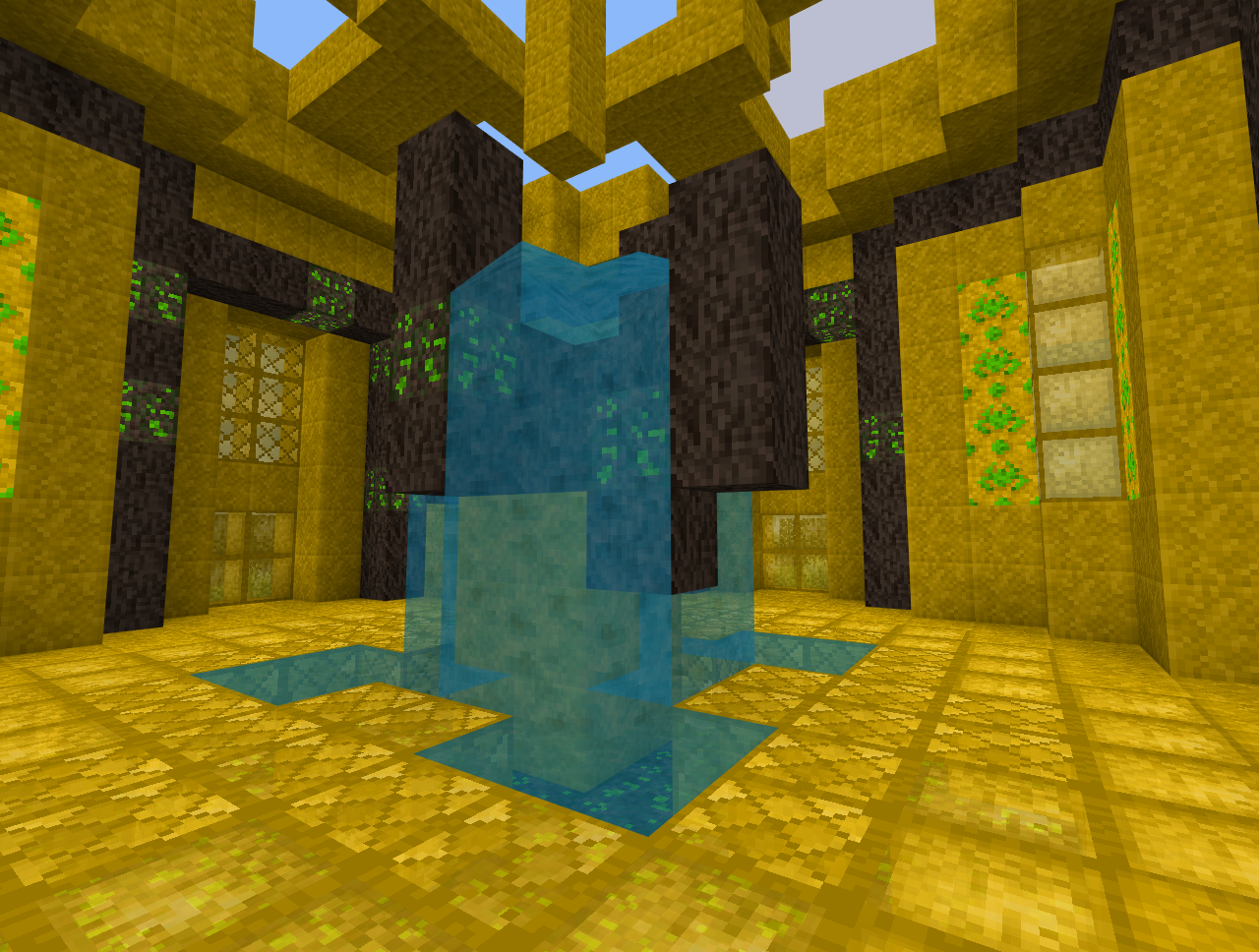 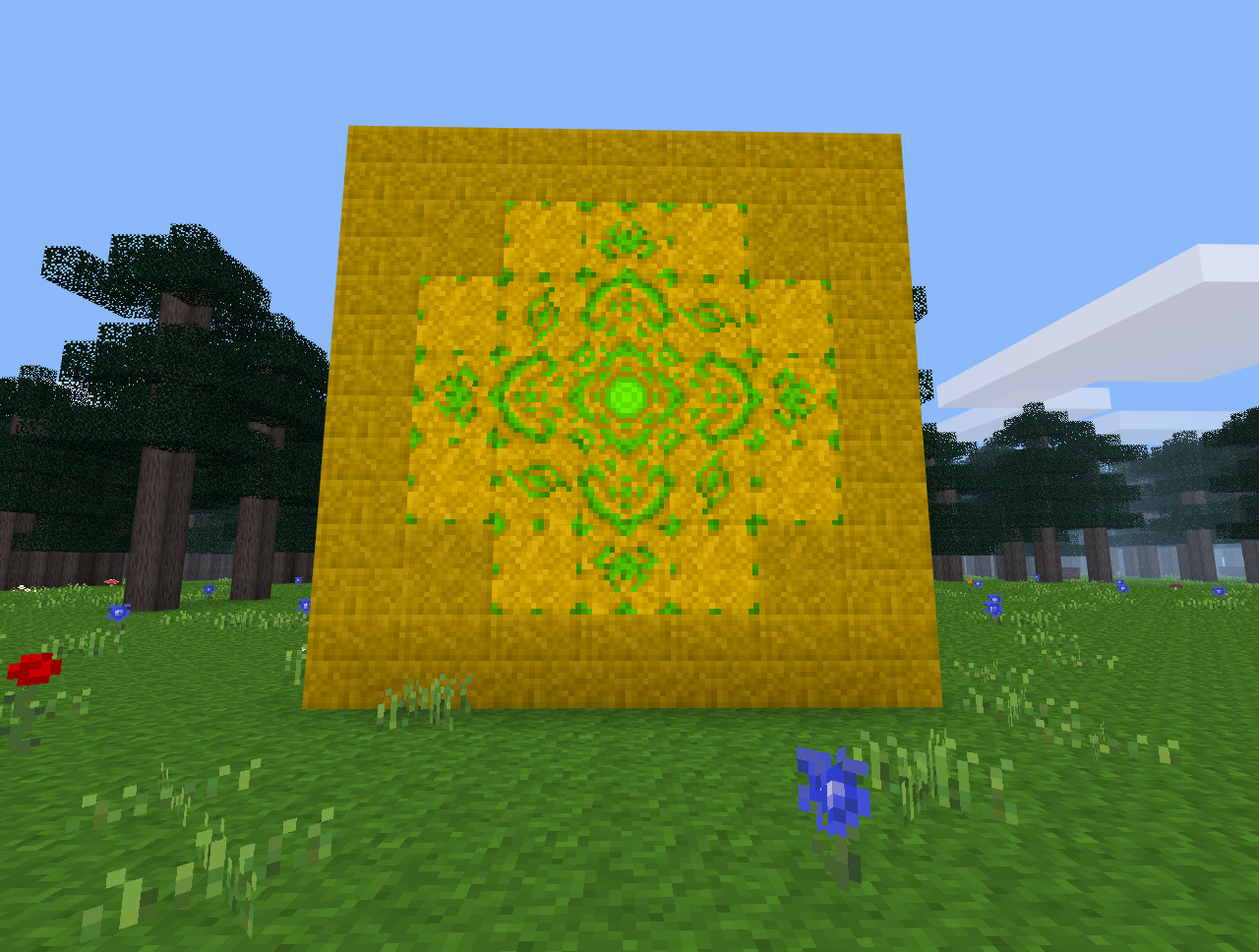 Concerning the glass, there is not really much to say, you can use it on cathedrals, houses, whatever. It was meant to be in the fantasy style, so it might look bad on modern builds.
There are two types: Ordinary glass (as that one in default mod) and medieval glass (as the one in darkage), i myself find that the combination of the two is the best choice.
+ Spoiler A giant root system that is generated below the ground (-32 to -64), roots start at -16.
This part is still work in progress.

Nodes that are generated in the root system are:
-- Root walls - basically roots plus dirt.
-- Roots - The main component, may contain amber.
-- Smaller roots - These can be climbed upon, they are removed when placing the node on their position.
-- Green glowing crystals - Found in the root walls, they glow the place up a bit. Green crystals are used for decoration, since they naturally glow.
-- Glowing particles - The greatest impact on your FPS, the nodes that create these are the main source of underground light. 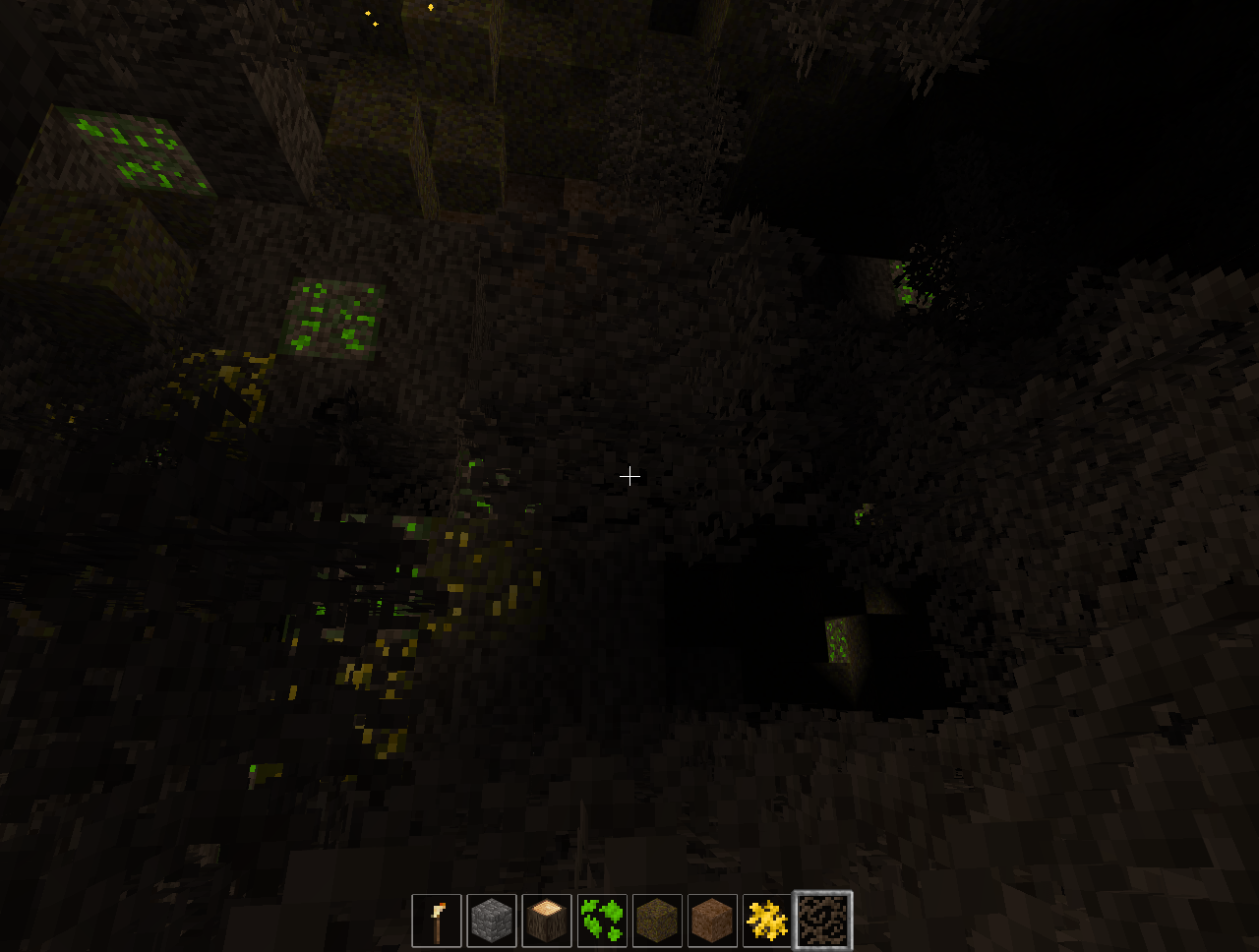 Wait, did i just forget dependencies? Yea i did.
The only dependency is the [default]
Optional dependencies include [3d_armor] [toolranks] [moreblocks] and [darkage]
Last edited by the_raven_262 on Thu Nov 09, 2017 19:41, edited 10 times in total.

Thanks comrade for the first mod supporting my toolranks! Looks awesome.
It's lisac, not lisa.
400 character limit? Am I writing a book?
Administrator on Craig's server. Minetest player.
"The enemy pales when they see the face of Dazzle!" ~ Dazzle obviously.
I live in Serbia.
Steam | OpenDOTA
My mods:
Tool ranks
I appreciate donations in TF2 items. :)

The root system needs a huge rework.
Mostly cause it is generated using blob ores, which is not how it should be done.
I did think of adding some stuff in amber itself, fossils, but didn't think too much about it, mod has already gone a bit off track.

why not using scatters for roots?
ＯＭＩＣＲＯＮ - pre-release 0.7 "Tweaky Update"

why not using scatters for roots?

Scatter ore distribution is not useful in this case. There would be root nodes randomly placed around the underground , not connected to each other. My guess is that a vein ore could be used for making more root-like shape, but i don't know how to properly configure that one.

scater can be useful. You should really look into it. Configure it like iron ore.

There's an issue with the regular amber armor textures, the preview and the armor that shows on the player give errors.
What is SCP-055?

Oddly enough, I have already had this error. And I have fixed it. I don't know why should it be happening anymore.
It was basically the case of wrongly named textures, how they got the wrong names in the first place? I have no idea.

Check if you have the latest 3d_armor, I didn't test the mod with the 0.5 version though.

Making the root system to look more like one. 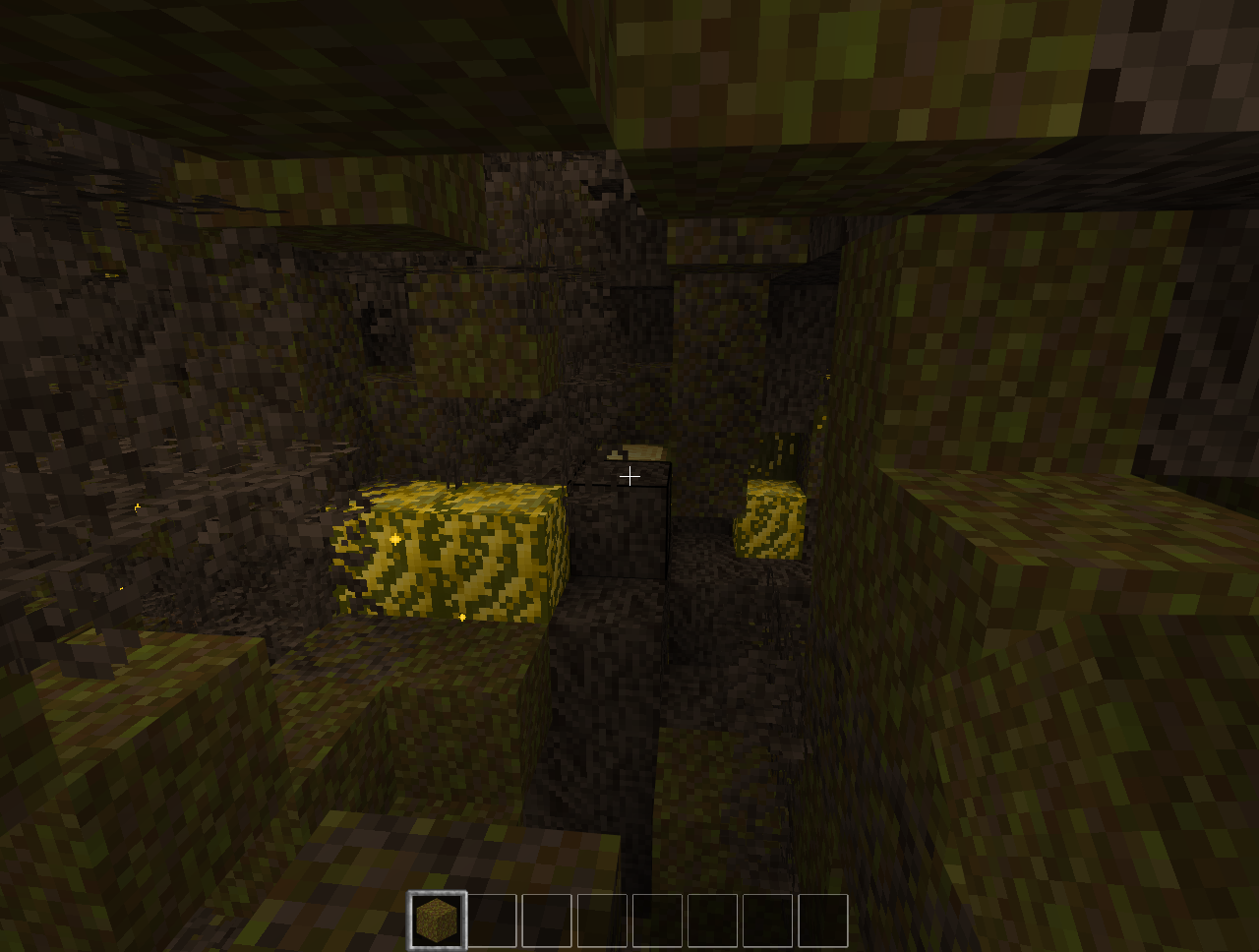 [EDIT] The new update to the root system has been added. Less colorful, more realistic. If it can even be realistic.

[update] Even more updates to the root system plus some more decorative nodes. 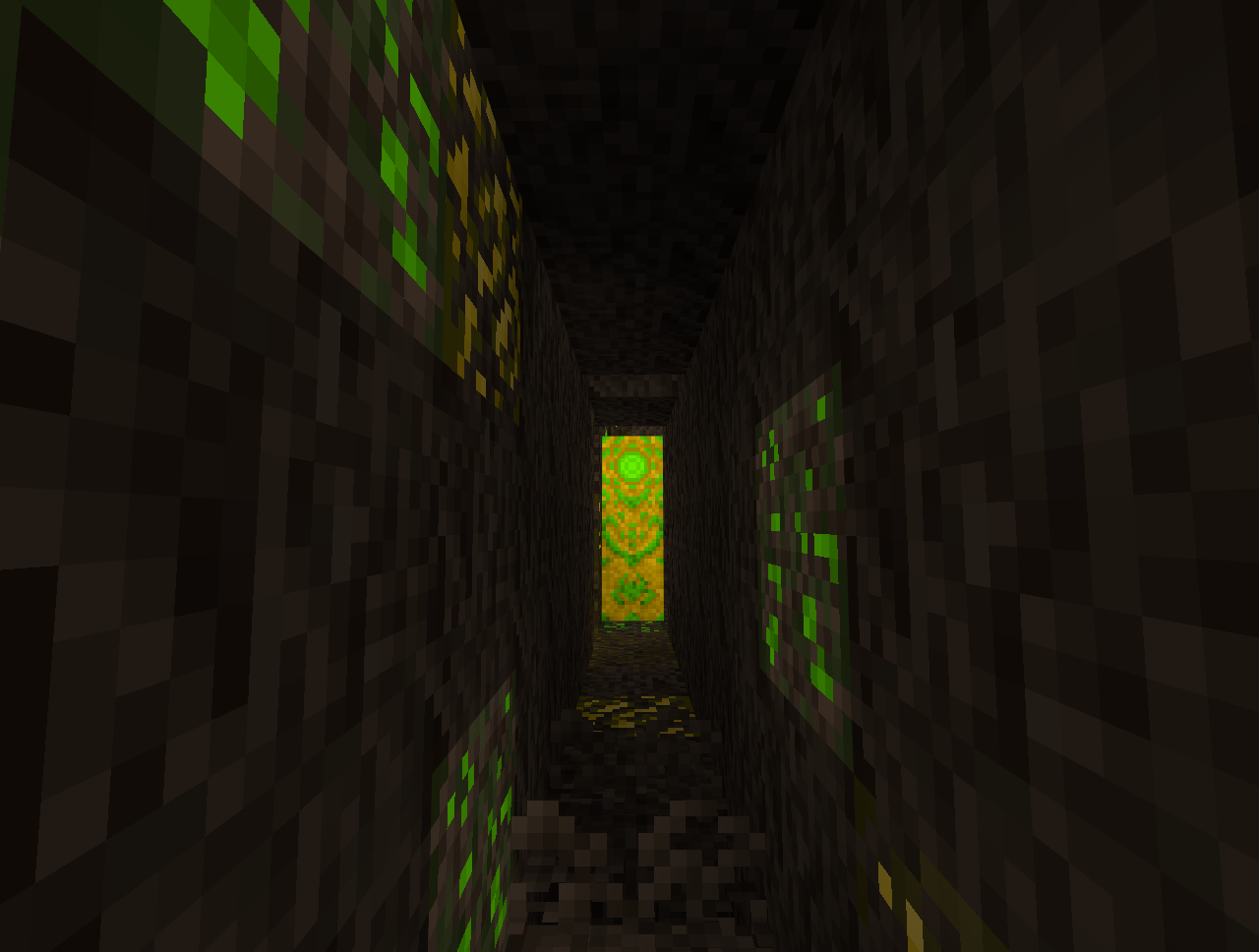 Maybe an ultra rare form of amber could be a bug in the amber :P
What is SCP-055?

I'm currently working on the ruins that are to be generated via voxel manipulation. I prefer this way over the schematics and I might replace the amber trunk schems with the generated ones.

As for the bugs, I do plan to add some more living ones ...

Could you take the particles away? Or add a way to disable them? They're killing my FPS. :(
What is SCP-055?

Chem871 wrote:Could you take the particles away? Or add a way to disable them? They're killing my FPS. :(

Maybe a Nyan Cat preserved flawlessly in amber would be rare, and a cool find :P
What is SCP-055?

It just puts a lot of amber everywhere. By default it is really not balanced for survival. Also the root system just covers a whole layer of underground absolutely everywhere, and it's really hard to navigate in there... I like the second if not for the first problem.

Read the name of this mod.

Lord_Vlad wrote:By default it is really not balanced for survival.

Lord_Vlad wrote:Also the root system just covers a whole layer of underground absolutely everywhere, and it's really hard to navigate in there.

Lord_Vlad wrote:I like the second if not for the first problem.

What I mean is that you can't walk 4 steps in a forest without finding an amber three, digging amber in dirt is actually quite balanced I'd say... and your root layer is also just filled to the brim with it.

And the root layer, maybe it would be better if there was a bit more other blocks that just the wooden ones, maybe have some dirt or stone in between...

And what I meant is that I like that the root system is hard to navigate, but not that it's everywhere. I'd much rather have root systems of various sizes in various places underground, a bit like a very big ore vein each time, with some space and dirt in between.
Post Reply
25 posts • Page 1 of 1