Hello! This is a quick mod I made to enable modified physics only while holding down the Use key (default [E]). Includes optional stamina drain and hunger. 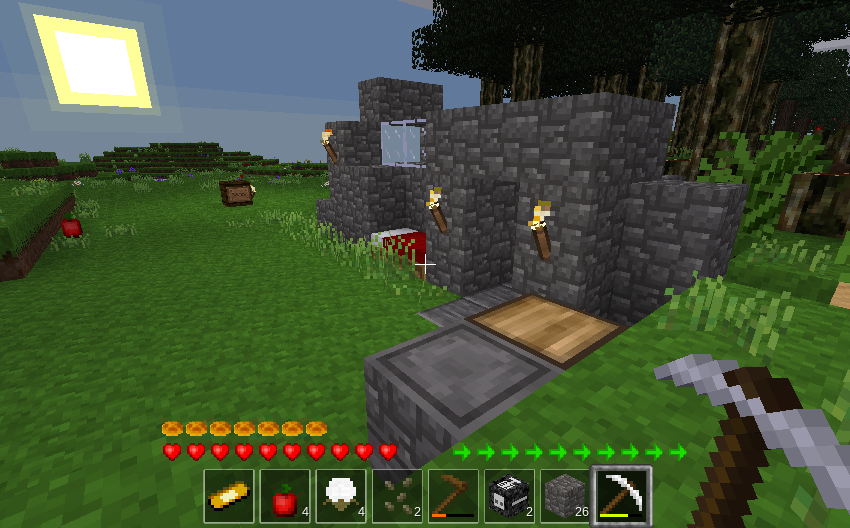 Updated to show bubbles in the correct place when damage is enabled but stamina is not.
https://youtu.be/BlXk48hZbc0

Added hunger. It's optional, and the starvation rate is adjustable (see settingtypes.txt).

Updated:
Limit item eat amount, fix bugs.  …
Hunger bar is lowered if hearts are off.
Stamina is lowered if satiation is low.
Damage taken frequency is reduced if not sated.
https://youtu.be/BlXk48hZbc0

Good job.
I am groot!

I updated the mod to increase [stamina] drain rate depending on how hungry the player is. I'm not terribly happy with the code, I hope it's alright. At full satiation, the player can sprint longer, now.

I'll likely also change the fill rate to be lower if the player is moving.
https://youtu.be/BlXk48hZbc0

jas wrote:I'll likely also change the fill rate to be lower if the player is moving.

Maybe when the player jumps the stamina should decrease to?
I am groot!

Hm, right now the stamina only decreases when jumping if holding the sprint key. In fact, that's the only time stamina is ever depleted. It would be interesting to decrease stamina when jumping. (Actually, the stamina is depleted down to zero if starved.)

Another idea I'm thinking about is implementing a cooldown timeout, such that if the player totally runs out of stamina, they have to wait for it to fully recharge before it can be used again. I should also lessen the effect of the "stamina fill rate when moving" multiplier.

Okay, I've created three issues on the GitHub issue tracker. Thank you googol, it's a good suggestion and one that touches on a bigger aspect: what else besides sprinting does stamina relate to?

Update: The player is now silent while sneaking, making no footstep sounds. Secondly, there's now a crunch sound that plays at various pitches when eating. Update #2: Players are now physical, unless they're dead, then they're not until they respawn.
https://youtu.be/BlXk48hZbc0

I started a server with this mod, again. It's a minetest-0.5.0-dev server, and is located at dcbl.duckdns.org:30000. I'm going to tweak this mod such that it's a little more efficient, if I can.

I added at least one obstacle course, but I'm going to make more. The one I made is vertical, so I'll probably extend it out horizontally at the top. Here's a video: