A robot controlled by signs. 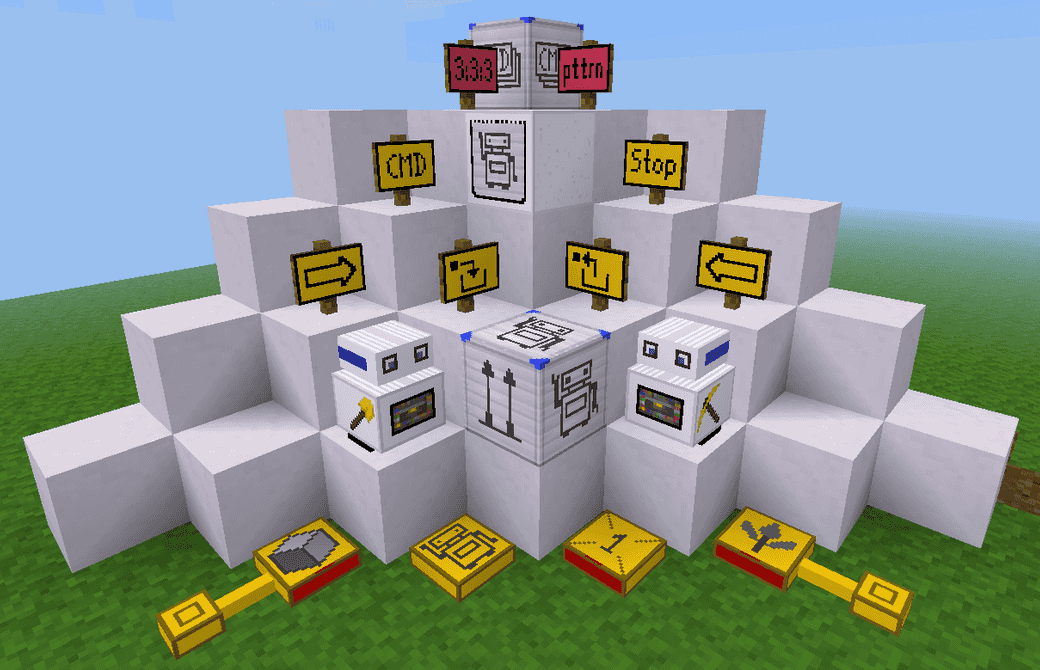 The bot can only be controlled by signs that are placed in its path.
After starting, the bot runs in the default direction until it encounters a sign. There, the commands on the sign are processed.
Signs are available for many standard tasks.
There is also a sign that can be programmed by the player, which then is processed by the bot.
But there are not programming skills needed, Bot commands are similar to chat commands.

Further blocks: Sensors must be connected (paired) with actuators, by means of the Connection Tool. Click on both blocks one after the other. A successful pairing is indicated by a ping / pong noise.

An actuator can receive signals from many sensors. A sensor can only be connected to an actuator. However, if several actuators are to be controlled by one sensor, a signal extender block can be used. This connects to a sensor when it is placed next to the sensor. This extender can then be paired with another actuator.

Sensors are: Actuators are:
In addition, there are currently the following blocks:

The code is on GitHub.

Looks very cute. I'm sure many players will love the mod if they ever happen to encounter it. Would be nice to have it on a server. Also looks like something that could fit very well into the educational environment.
A list of my mods can be found here.

The bot recursively builds a stairway based on a building sign that is placed cyclically and then used again and again (see video). 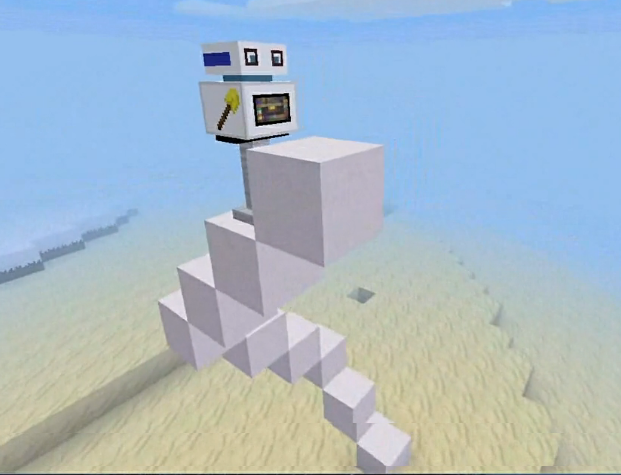 This allows for example to build a cobble tower around the sign with the script: 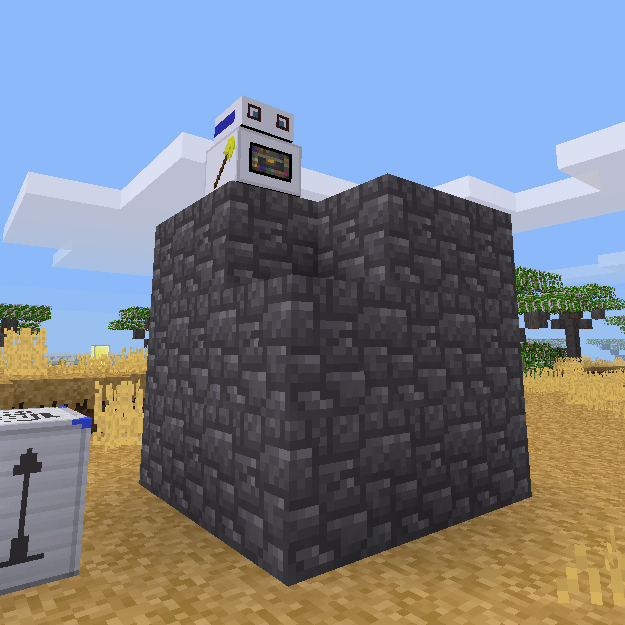 Can Signs Bot be used to fix defective tubelib items? Say:
Wondering if this can be done to fully automate (or almost to near automation) a harvest/quarry system.

Currently not, but would be possible.
The question is: How shall the bot know, if any node is defect?
Of course, you can use a bot that visits all relevant nodes cyclically and tries to fix them.

But does this make sense? If a server owner enables the "machine ageing" feature to keep the players busy, is it a good idea to provide a way to bypass this feature?

The same goes for the battery.
Sent from my Commodore 64. Some of my Mods: Tech Age, TechPack, Hyperloop, Tower Crane, Lumberjack, Iron Age, Minecart, Signs Bot.

I'm trying to farm/harvest a 3x3 flower bed using signs_bot but can't seem to do so. Here's my setup:

Isn't the set of commands just:

+signs_bot commands
turn_right
cutting
But somehow the cutting command does not work; the bot would just stay there and do nothing. What am I missing?

Also, how do you detect the central flower using the node sensor? Found the answer on the wiki:


Node Sensor: Sends a signal when it detects a change (tree, cactus, flower, etc.) in front of the sensor (over 3 positions)

A couple of hiccups which I was able to solve:

The Signs Bot has the same Ethereal problem with the flowers as Techage. It can't work, I have to fix that first...

The dig command works well, though, as an alternative for the time being. :D

I fixed the flower issue. Update on GitHub

Instead of your own sign, you can also use the flower sign. Place it in front of the flower field.
+Image

I'm trying to dig a 16 x 16 x 1 area (where 1 is the height of the area) using the "sign command" but the signs bot just ends up digging just half of the area. I've also tried laying blocks (same dimensions, 16 x 16 x 1) and it also ends up placing blocks almost half of the area. So, as a workaround, I just ended up running the signs bot twice, i.e. dig/lay blocks in a 16 x 8 x 1 fashion. At first I thought it was a bug then later realized the bot ends up losing power since techage mod is also installed.

Is there a way to increase the power the signs bot can hold? I'm trying to decipher which file/line to tweak to extend the signs bot power capacity. Is it this file/line?

Second, I'm stumped on where to use/apply this command:

To increase the power capacity / endurance, change the line 26 in basis.lua

The command low_batt <percent> is used to query the battery charge in percent. If the value falls below this, the bot switches off.

Sorry -- why did you use 7 in low_batt 7 in this case? How do you determine/estimate at what power percentage will the bot switch off? Is it: 1 action = 1 percent power usage?

No, 1 action is one point from tha capa value
I don't remember, where the value 7 comes from, it is some kind of experience value :)
Sent from my Commodore 64. Some of my Mods: Tech Age, TechPack, Hyperloop, Tower Crane, Lumberjack, Iron Age, Minecart, Signs Bot.
Post Reply
17 posts • Page 1 of 1