Configuration Panel is an API extension for Minetest that allows seamless loading of mod configuration at runtime. It provides much greater flexibility than Minetest's builtin 'Settings' interface, since the mod configuration itself is read as a native Lua script. Hence it's possible to include simple data structures without the need for serialization, in addition to temporary variables, mathematical expressions, and conditional branching.
While some might be opposed to using Lua for configuration purposes, arguing that it is anti-pattern, that's not actually true. In fact, Lua itself was originally intended to double as a configuration language, like JSON, so it is very befitting of its purpose. 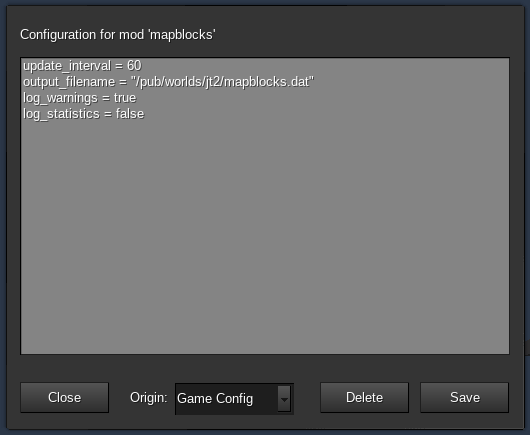 There is only one function call necessary to load your mod's configuration:
By default, the configuration is first loaded from the 'config.lua' script within the mod directory. If not found, it will instead be loaded from a script residing within the 'config' subdirectory of the current world. That script must be named the same as the mod but with a '.lua' extension, of course.

This would be the typical order of loading on Linux distros of Minetest:

By specifying the option 'can_override = true', both scripts will be loaded, allowing for the world configuration to override the game configuration. So for example

Hence, 'allow_fly' and 'allow_walk' will be false, whereas 'allow_swim' will be true. By default, however, all three would remain false since the world configuration is ignored whenever the game configuration is found.

A chat command is also available for editing the configuration directly in-game. Simply type '/config' followed by the mod name to configure. The interface is self-explanatory.

by sorcerykid
I just pushed a quick-fix to address mod security issues. Now the mod should work properly when security is enabled, which is by default. However, to use the /config chat command you must add "config" to the list of trusted mods in minetest.conf:

If you opt not to do this, then the editing functionality will be disabled. However, the mod will continue to function otherwise.

by runs
Why is mandatory ActiveFormspecs?

Any chance of a version without that dependency?

by sorcerykid
Yes, that is a good point. It's doubtful that ordinary players will need the in-game editing functionality, so the extra dependency shouldn't be a requirement for bundling with other packages. I've made note of your suggestion for the next version.

A new version of Configuration Panel is ready for download. Here is a complete change log:
There were no new features in this release, other than expanding the sandbox with several more builtin functions.

However, I did fix a serious bug that prevented mods from presetting their configuration via the base_config parameter to minetest.load_config(). This would have only impacted mods that actually used that parameter. For those mods that relied solely on the game and/or world configuration scripts, this would not have been an issue.

by Astrobe
Out of curiosity, do you have pointers about using Lua as a configuration language being an anti-pattern ?
All times are UTC
Page 1 of 1