Mapgens v6, v7, 3d, and valleys provides those terrain features from within Lua.

Voronoi is custom made, uses a 3 layered recursive voronoi.

Biomes are determined within each mapgen.

Mapgens provide heightmaps and biome maps to other mods that depend on the mapgen. 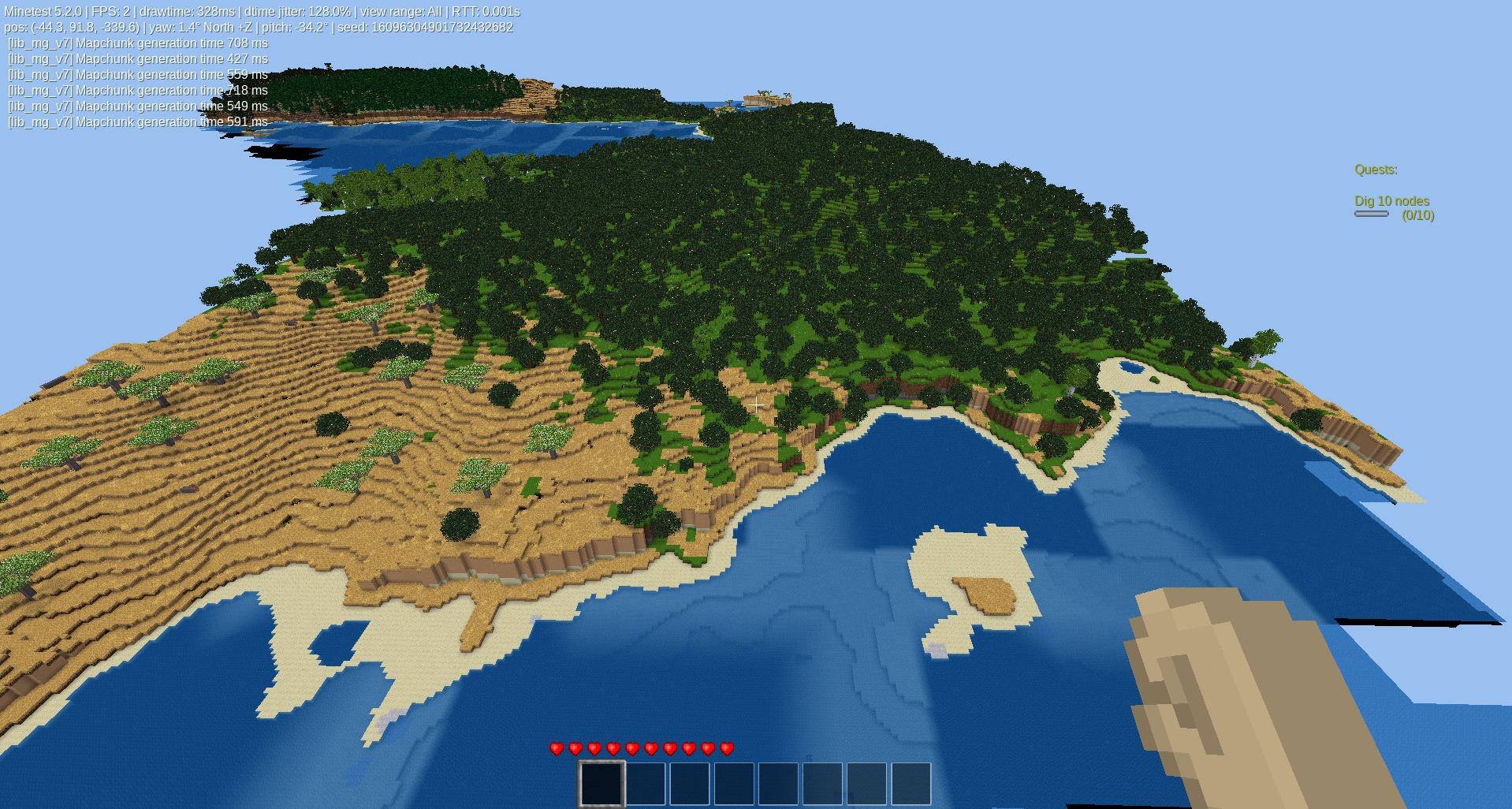 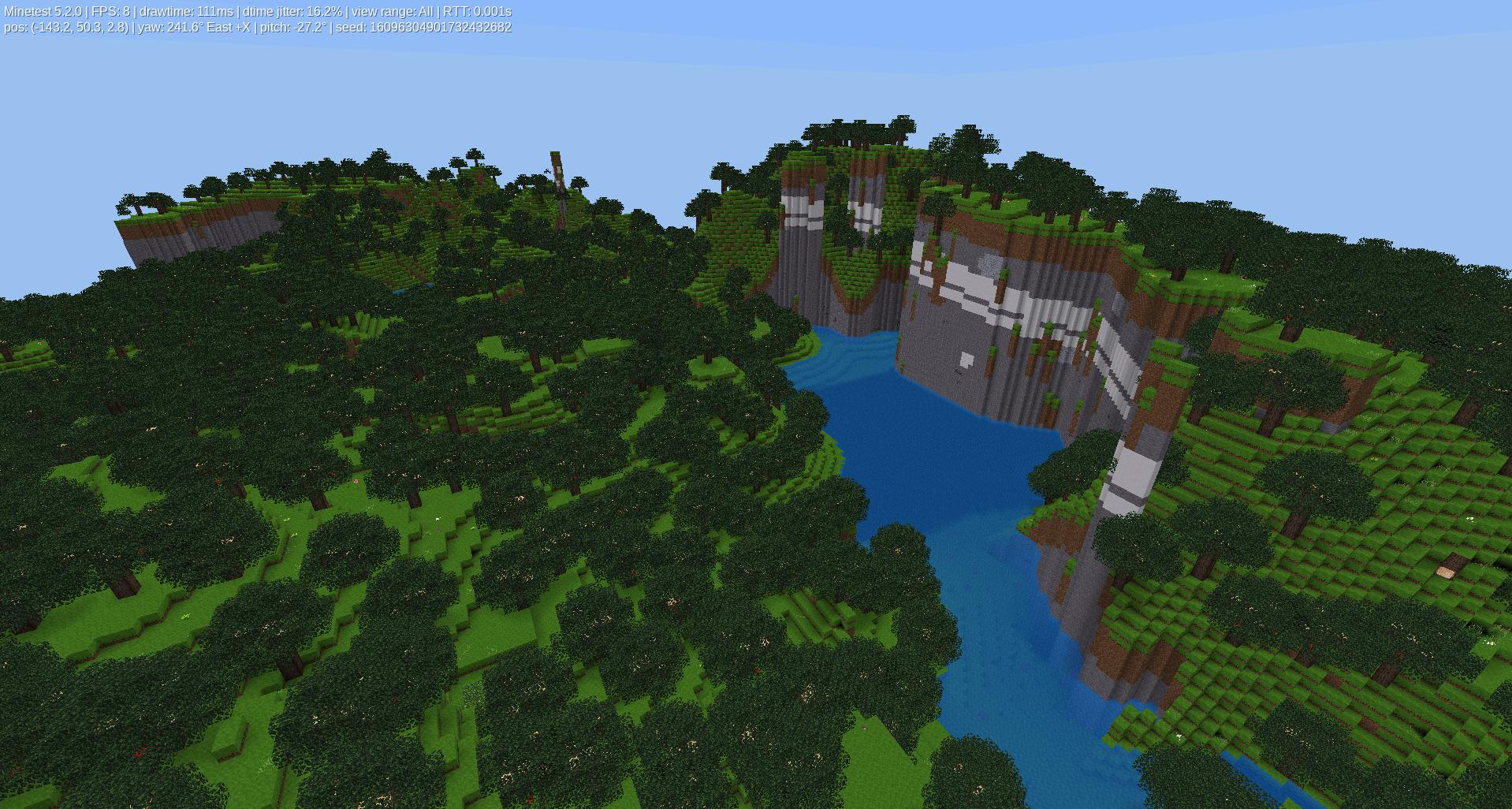 Tried to get 'lib_mg_3d' going and noticed that it lists only optional dependencies for 'default' and 'lib_materials'. So I added it to a new world and upon loading got an error beacuse it tried to index a table from 'lib_materials' (which I didn't add, since it is listed as optional).
Adding 'lib_materials' just got me in the same dead end as i described here: viewtopic.php?p=384493#p384493


Also I made a PR for 'lib_mg_v6' which about doubles the generation speed.

Edit: Also, also the first link in the OP is messed up.
the unit of caring

My bad. If you're comfortable doing so, for each of these mods, you'll find at the top of init.lua, a list of the nodes used. There is a commented list of nodes for default, and the uncommented list for lib_materials nodes, the default choice. I admit I need to code that better.

Edit: As for the PR, I actually had them coded for those performance "enhancements", but found zero difference between using the pre-defined buffers and what paramat calls "point polling". This is still true, but your link also points to new info of which I was unaware. I'll reinvestigate a few of those points.

Also, there are some further code enhancements regarding biome selection that I've made which will affect each of these mods and their respective performance.

One reason I've chosen the point polling method, is that when scaling noise values, using the recommended pre-defined buffers generally complains about too many octaves when other parameters are scaled low enough, but the point polled method still provides valid noise values. I'm not sure if this is intentional or a bug, but the behavior of the two methods is different. I used the voronoi mapgen for most tests, which is how I discovered this difference, when scaling the world size by 0.01.

The v7 and voronoi mapgens use some logic from Termos' Islands mod to form cliffs. All of these mods do in some way or another "depend" on lib_materials / lib_ecology, because I do not code for MTG or default. I've cobbled together my own mod soup for a "basic" development game base. I've refactored many, many mods to use this base, as opposed to MTGs default mod. In the process, I've made performance enhancements by trimming unnecessary code, rethinking basic logic, and by merging many redundant mods and code. While still buggy in mods that I've not given enough attention, it is complete and stable enough to code against.

Please let me know if you encounter any other issues or have any comments.

Still using 'lib_mg_3d'.
Went into the mod and chanched list of nodes used. Crash. At another place you also asume theat lib_materials is aviable:

so I go into lib materails find the values and paste them in. Crash. Too many octaves. (Why does that happen with the default vaules?)
So I find the numbers and after a bit of calculation I turn world scale up to eleven.
Crash.
This one took even more digging around and as far as I can tell you have hardcoded biome names it looks for.
Conclusion: 'lib_materials' is in fact not an optional dependency.

The simplest solution is probably to just mark it as a hard dependency and be done with it.

You are mixing up different concepts.
On one hand you have point polling vs getting the noise data in bulk, that is using a 'PerlinNoise' vs 'PerlinNoiseMap' object.
On the other, if you are using a 'PerlinNoiseMap' and if you then use one of the functions which return the values in a flat array, you have the choice to use a second parameter to pass a table which gets filled with the result, instead of getting a whole new table with 512000 values.

The 'too many octaves' messege isn't realy acurate. What it is actually complaining about is that at least one level of octaves is shorter then one node (for example in lib_mg_3d with the provided values the shortest octave was less then 1/10 of a node long) The bulk noise generator uses interpolations to get the individual values to speed up, instead of calculating the values separately for each possition. I am guessing there is some issue with that method when the lenght of the octave falls bellow 1 node. If you 'point poll' you get one value at a time so there is nothing to interpolate.

Another point: The methods described in the article are focused on optimizing memory usage (to preventOOM), speed is a nice side benefit.

As for my PR, the biggest speed increase wasn't moving from point polling to bulk polling. It was from not creating four new noise objects for each x|z position. The same thing you already do here:
nobj_heatmap = nobj_heatmap or minetest.get_perlin_map(np_heat, permapdims3d)
can also be aplied to 'minetest.get_perlin'. Create once and then just reuse it.

PS: The first link in the OP is still messed up.
the unit of caring

The OOM optimizations that you pointed to are applied, where I could. In some instances, such as the v7 mapgen, the alt and base noise values scaled according to the persistance noise, and generated on the fly. Rather speedy, even when point polled. Because the two noises are scaled at runtime, using the OOM optimization recommended map and buffer is not possible. Also, due to scaling of noise values for alt, base, and height select, the map and buffer cannot be generated by the functions. "Too many octaves". The local polling also discards the map entirely, from what I can tell, calculating the value for that position, giving it the speed it has.

Where optimizations have not been applied elsewhere in these mods, if it was not on purpose, then it was only an oversight, and I'll get each updated to use the map and buffer.

On a related note, I use the following, instead of paramats' example. I honest couldn't get the map_flat to work, and didn't play with code very much. I also noticed that he uses an over length of 2, grabbing a node inside of each of the neighboring chunks. This causes gaps in terrian every 48 meters, and causes tree to be decapitated at that same elevation. This is reference to the definition and use of the chulens boundary variable being set to minp.x -1 to maxp.x + 1. The permapdims2d variable is minp.x to maxp.x, and does not write into neighboring chunks.

declared outside of on_gen call

declared inside of on_gen call

So I took a look at 'lib_mg_v7' and must admit that I also see no easy way to optimize the getting of 'height_base'/'height_alt'. Though I am prety sure you would get a noticable speedup form creating the noise objects used for 'hselect' and 'persist' only once.

Anohter very easy optimization is to use this:
vm:get_data(data)
instead of this:
data = vm:get_data()
The later creates a new table and assigns it to 'data', while the former reuses the already existing table and thus doesn't have to allocate new memory.

As for the "Too many octaves." issue: That is affected by three factors: spread, octaves and lacunarity. Since the only thing you are scaling in this mapgen is persistance, you only need to set the initial noise params correctly, so they don't produce octaves shorter then one, and then you don't have to wory about it.

PS: The first link in the OP is still messed up.
the unit of caring
Post Reply
8 posts • Page 1 of 1