This is my first mod so don't expect too much.

It adds a submarine and a submarine destroyer to the game. The code is mostly taken from PilzAdam's boats mod. Sound Settings
To mute the sonar ping you can edit minetest.conf:

Dependencies: default, tnt (both in minetest_game)

Niceee! Good job. I have two suggestions; one a feature request, and the other kinda an issue. Don't think it's worth opening an issue on GitHub, so here they are right here.

I noticed that if using a submarine in survival, you still lose air bubbles when underwater. I believe it's quite easily possible to either prevent the air bubbles from going down, or automatically refill them, though I don't remember how off hand. Look around for the scuba mod, it's old and has been long since abandoned, but you'd probably be able to figure out how to prevent air from running out underwater.

Second thing, the issue, is that turning seems rather choppy compared to the 0.4.15 boats. IDK which boats mod this is based off, but I'd assume it's based of the boats mod in MTGame 0.4.14. If that's the case, I'd try and update your submarines to be at least loosely based of 0.4.15 boats.

Anyways, great job! Keep it up.
MicroExpansion, Working Computers, All Projects - Check out my YouTube channel! (octacian)
I'm currently inactive in the Minetest community! So if I don't respond, that's why.

Thanks!
1.I made a test version were I included this feature but had to rewrite it because the whole thing was a mess, so I'll include it again. EDIT:DONE
2.It's based off the default boats mod in 0.4.15 but I changed the complete control section in the code. I tried to copy the part for steering but it didn't change anything.
Hi This is my submarine mod!

Just tested the latest version, air doesn't decrease or even show for that matter, great job! However, forward and backward movement seems a little weird. It seems as though the submarine won't start moving unless I hold shift. Then, after it starts moving, I can let go. Once it gets moving it's a lot slower too. Not sure if this is purposeful or accidental, but.
MicroExpansion, Working Computers, All Projects - Check out my YouTube channel! (octacian)
I'm currently inactive in the Minetest community! So if I don't respond, that's why.

It was accidental but it works correctly now.
Hi This is my submarine mod!

Huge update!
This mod is now a Modpack to override the default boats mod

new Features:
Hi This is my submarine mod!

Wow that is cool! Especially the torpedo part. The particles and animations just make it so much nicer though. Amazing job! I'll make a YouTube video on this soon...
MicroExpansion, Working Computers, All Projects - Check out my YouTube channel! (octacian)
I'm currently inactive in the Minetest community! So if I don't respond, that's why.

Thanks!
Nice youtube channel!
Hi This is my submarine mod!

Sound Update!
There is sound now.
If you get annoyed by the ping sound of the sonar: There is a setting in minetest.conf where you can set the volume of the ping:

is default.
Hi This is my submarine mod!

Another update!
I've added a submarine destroyer which drops depth charges.
Also there were lots of bugfixes.
Hi This is my submarine mod!

Update: The submarines are now an api so you can register your own ones.
Hi This is my submarine mod!

Thank you! You can use it, I don't mind.
Hi This is my submarine mod!

Another update: Bugixes and adding an api to the submarine destroyer
please report any bugs
Hi This is my submarine mod!

Thanks! Bugfix:You couldn't shoot torpedos, now you can.

Yes, I want to make it to be able to run on a server and have a team deathmatch
Hi This is my submarine mod!

Would be cool for ctf servers
My modding team: https://github.com/basilea-rhomaion

Very nice idea, and nice models. "Normal" ships in MT tend to be built with slabs and the like - or are too cubic. Having such a ship as a sunken wreck usually looks a bit odd as it has either strange air effects around it, is too square and simple, or is far too large. The sea modpack places shipwrecks on the ocean floor. I wonder how it would look like if there'd be just a spawner placed that would spawn such a ship model from this mod. Could look very intresting.
A list of my mods can be found here.

I forked from sirrobzeroone's version.
Contains only Submarine, no torpedoes, no destroyers.
This works on Minetest 5.2.0.
https://github.com/michyo/submmarines

Very good for a first mod! I really like the submarine models. I hope I will try it out soon
COME SEE MY MINETEST MAP!!! FRANCAIS TRADDUCCIONS COMING SOON! ČESKY PŘEKLAD JIŽ NEDLOUHO!!!

Hi,
thanks for this beautiful mod!

I try your Submarine mod, but

1.I don't see the torpedo in the inventory;
2.When I place the Submarine int the sea, it doesn't appear...
3.Does the missile not destroy anything? 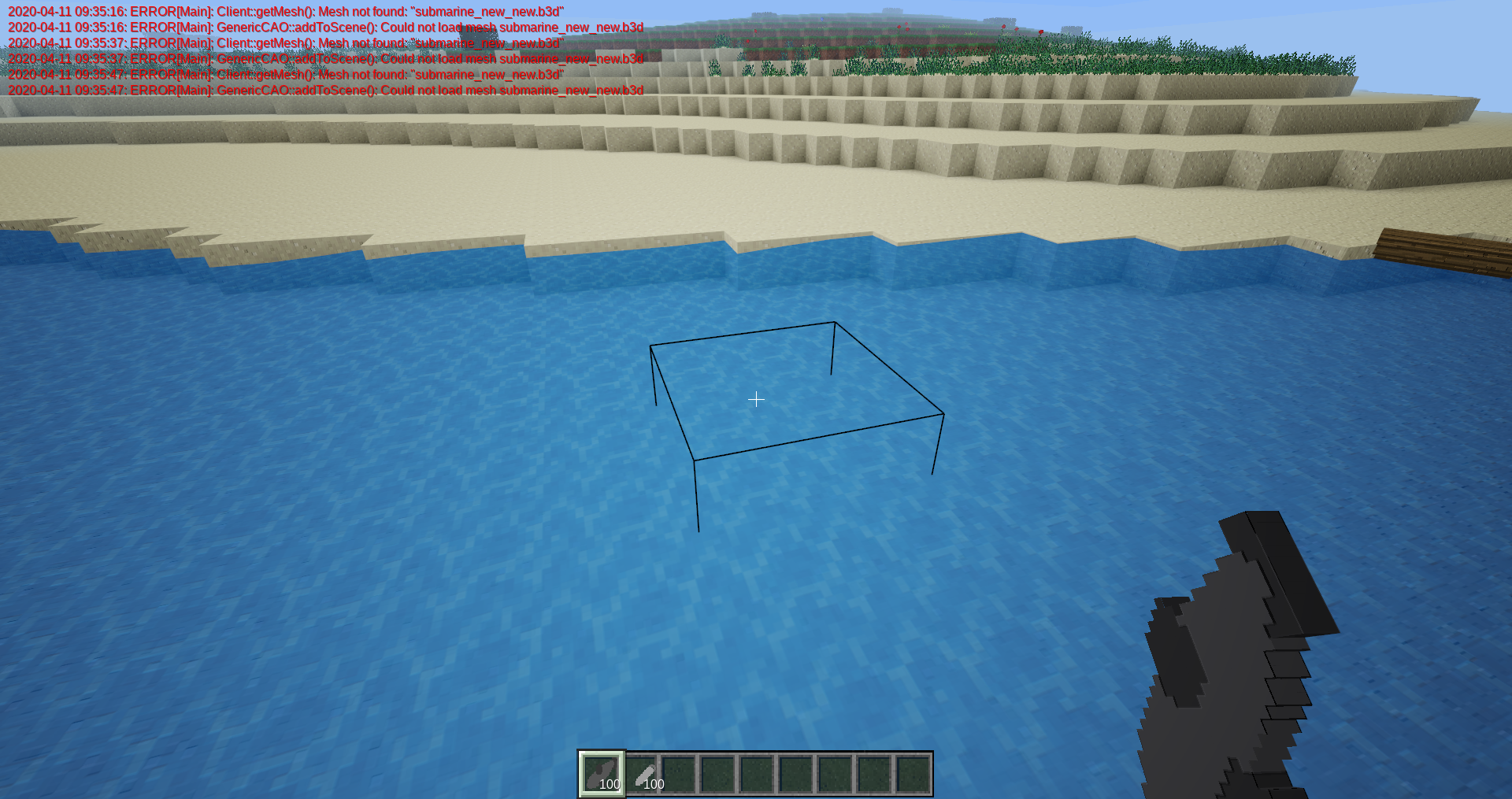