You are very talented to do huds! lov it!
ＯＭＩＣＲＯＮ - pre-release 0.7 "Tweaky Update"

Now, I've add slimes and goblins once more! The slimes are fairly standard, and this time come with their lava counterparts.

The goblins have been modified a bit more. And the trap now issues a new dcbl.set_status() method, and you can check this with /stats status. Heh, Messy Gobblestone sets your status to "slow". But, it's hardcoded to go back to normal after 1 second, so if you get away from the node you'll go back to normal speed. You can't sprint if you're status is "slow." The Messy Gobblestone now damages players, too.

I fixed up the Loom UI, and tweaked the zombies and removed the Tree Monster. I'm a little worried about the goblins running lose and settings nodes, but I gotta try it out. Haven't quite tested the harder goblins yet.
https://youtu.be/BlXk48hZbc0

So I've finally added some form of flight without a priv. It's tricky to use, because it's a tool the wears down each time you start sprinting, and sets your gravity to -0.1. This means that in order to maintain steady even flight, you must constantly enable/disable sprinting. Of course, you can only sprint for as long as you're sated (more hungry = less flight time), so it's really easy to attack the ground below at maximum velocity.

To use it, simply obtain a chicken feather and wield (hold) it while sprinting. I plan to use features and mese in a recipe to make a particular item, and not use actual chicken feathers. Just, it's only that there's something so funny about Chicken Feather Flight to me. Ha!

I'm going to add a "level" stat, and increase it on every 100 or so XP earned. Neither of that would affect gameplay yet though, but also plan to adjust armor/damage levels based on them, somehow. I'm currently adjusting mobs, and the Dungeon Master and Oerkki are pretty scary now. I'd like the make the (enchanted)/armor work with player levels, but really need to look at the new override tool capabilities feature that was added. 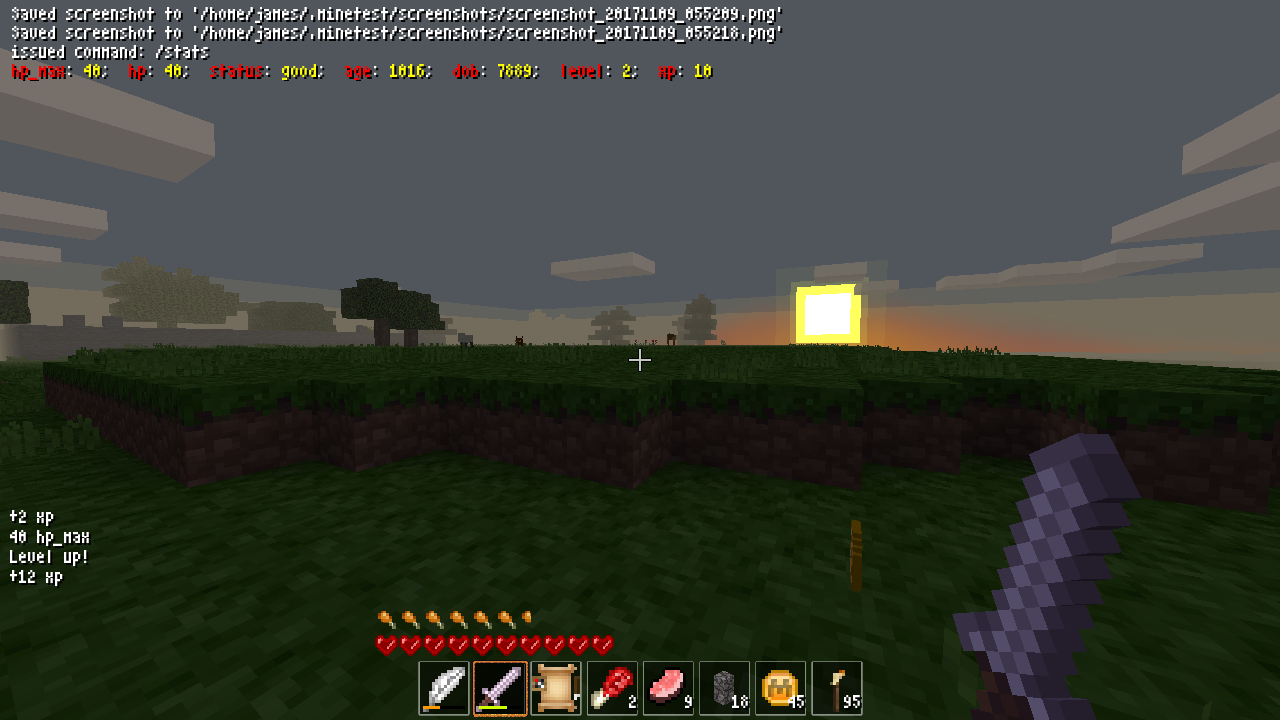 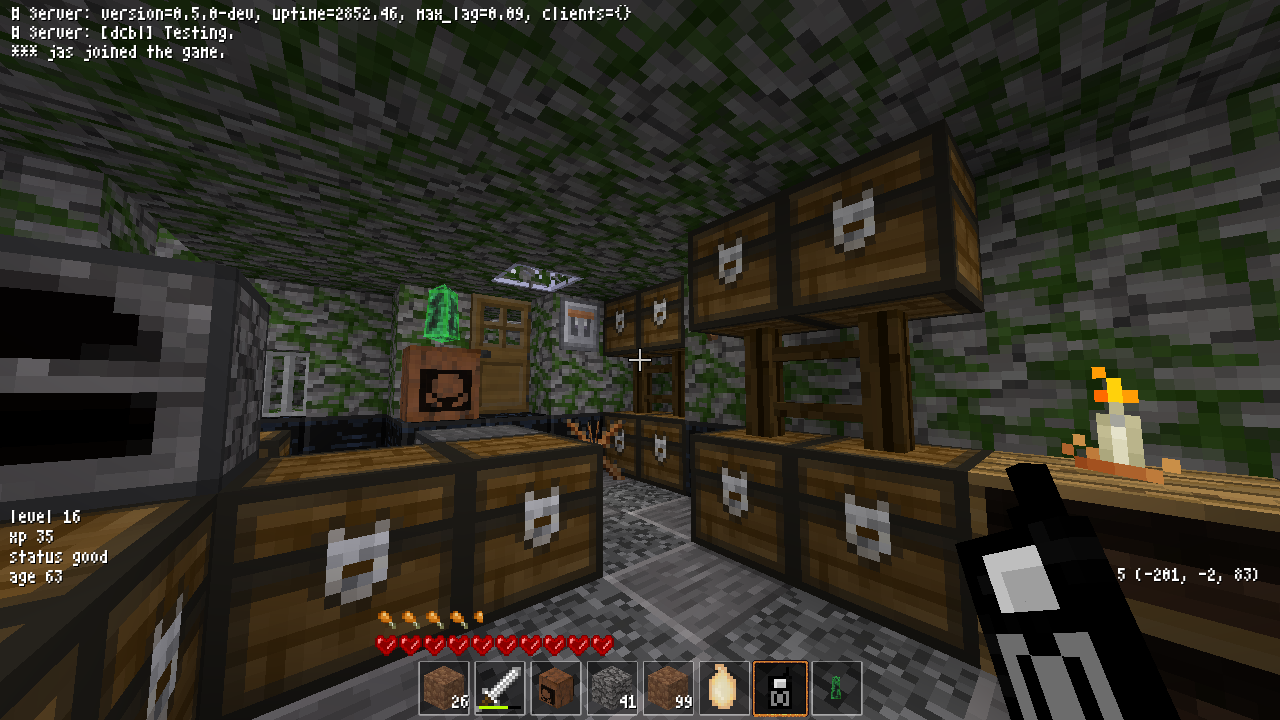 Dresser shows an armor preview, didn't go so far as the clothing. Mobs are updated a little bit, and there's some other bugs/features I forgot about. Oh! The enchantment table was updated and now the chicken feathers need to be enchanted to either fly, or go fast, or both (up to level 3). The tools and armor can be upgraded too. The levels all need adjustment.

Huh? is at the subgame an unknown mod like xdecor?

So it's official then, this sub-game definitely doesn't work with 0.4.16. Some parts may be extracted later. But for now, I have made a compass image for the walkie talkie. Wielding it now shows a compass, but the precision needs improvement, as well as the texture.

I made a video to demonstrate:
https://www.youtube.com/watch?v=Bh3_7PJEpFg

Update: I've changed the precision (much better!) and the texture (mostly better!). Here's some screenshots: https://imgur.com/a/UfoNf and it's live on dcbl.duckdns.org. The code is at https://github.com/jastevenson303/dcbl_default.
https://youtu.be/BlXk48hZbc0

There's an experimental warp goo liquid drawtype node now. Place it by using an amethyst warpstone, and set its destination by punching it with a walkie and typing "set warp <dest>" where <dest> is a valid warp in /listwarps.

You stand still inside it for 5 seconds and then it warps you. I just really need to know, though, because I play with Opaque Liquids setting, is there any to force that off? I prefer the translucent look, but haven't had luck with other node drawtypes. 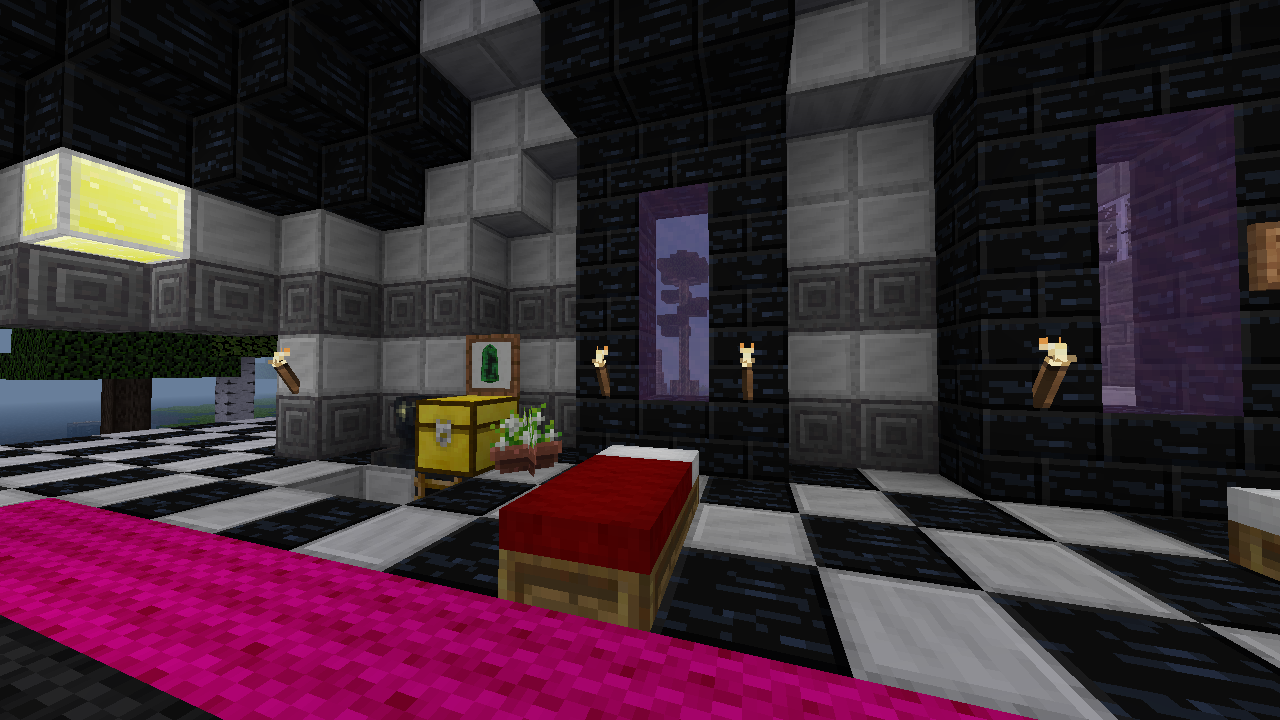 Update: Okay, I found the glass drawtype, and it's translucent and animating for opaque liquids setting now. I did earlier try waving=2, but that doesn't seem to work for translucency, but maybe I should try more drawtype combinations.

I also fixed some more bugs in the dresser mod. /gender to go back to default male/female skins. These are chosen randomly on new player join, so I'll need to give some initial wool. ^_^

Seriously, though, a backpack with goodies and a hotbar full of tools with a rules.txt generated default:written_book would be good. I spawn new players with a green emerald warpstone because it deflects the punches of other players/mobs -- making it so they don't get kill before playing.