As I see how much clones and copies of Minetest are existing, and some earn money, the only answer of "us" might be, adverb for minetest also.

Make is stronger with own webpages on even subdomains, using similar description and keywords and linking each other but mainly minetest.net.

So it might get better ranking, and more often found. Also in combination with translated copies as we even have several languages included in the game.

So, after I saw/found minetest.cn (a Chinese version) looking same as the original of minetest.net, I remember my old gewinnbriefe.de fight against bad cheating winning letter organization, using a lot ! of similar copies getting number one in google and first suggested to read about. With up to 5000 visitors a day that worked very well. I was in newspaper, radio and tv.

So i started with some:

But that are already 11 own counted pages for google, and with my other domain I can generate another 11, mean 22 good rated links later for minetest.net.

and
2nd THEN when i see Thai Language is in minetest client (so we here can use Thai letters),
as if that will not happen, all further translations are useless !!! I am yet at 54% translation for Thai (for this I guess other Thread then if needed)

3rd I go to make the other translations first
* Vietnam - as I had two gamer (dat) from there ...

rubenwardy wrote:Please don't make your site look like .net, as it will cause confusing


as I don't know what is the confusing, as I promote just minetest itself, and people are also not confused with same google pages but in there own language ...
and I did not find any complain about the longer existing same kind of copy in Chinese and so as long I don't understand the "confusing" nothing will happen.

So now I changed that pages a bit, with .net and .one to see, and still wait for further clearance what is confusing, and what might be enough difference.

I think most even dont know the main webpage minetest.net at all, haha


So the idea behind is then to enlarge that subdomain system to my other domain,
and hope that others, with own domains would join in, just copy the pages from me, change just the own domain names, and publish also.
So we get a strong cross linking "minetest" supporting.

As there are some, also would have advantage itself, using, promoting or hosting minetest ... domains here.

<selfcensorship>issue seems to have been fixed</selfcensorship>
Last edited by twoelk on Thu Mar 07, 2019 10:48, edited 2 times in total.

that is so confusing with .one just delete the o and add a t to get to .net, but so often I failure to other endings ... fixed

but on this way you should have seen the changes I did yet, with enlarging using "minetest" most with .one and .net

got restarting a world map with locations of minetest server

also another way of getting some organization into all the mods

But please don't answer or respond to any of the threads here or elsewhere.
German Let’s Play Channel | Officially released content

The server that I play on has a very interesting logo (same as gpcf's avatar because he is the server admin):

And for websites advterising MT... some server Wikis are already doing this (providing a link to the MT downloads page and going against MultiCraft): 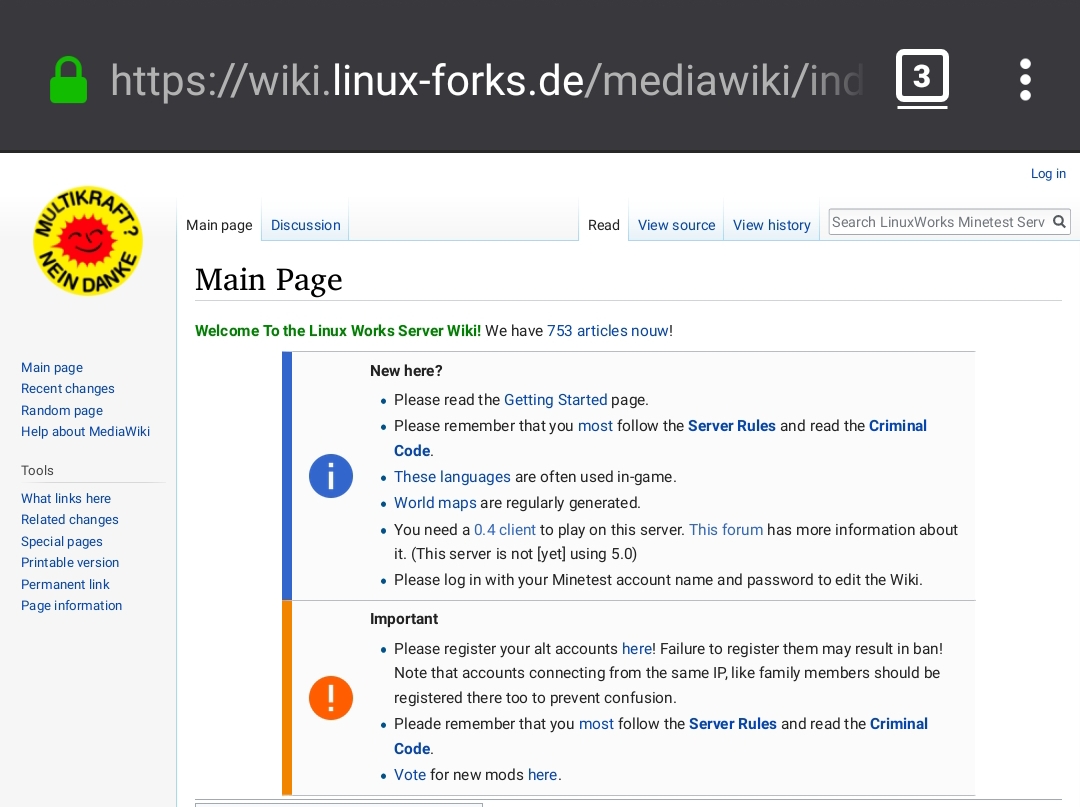 collect this pages, so people after me can then make sure this pages are cross connected ... I think I will not be here than anymore
Minetest has no future

retry, ...
to put all server on a world map will happen maybe automatic later,

I started with another version, making a map with the locations of the 12 nearest (by ping) servers, based on location in Chiang Mai (Thailand) = http://map.minetest.one
The Idea to make several maps for regions like south-America, Australia, Japan, Korea, ... I mean the locations most far from The-Netherlands ping results,
to offer this location based maps to gamer (client users) to get easier an Idea what server might be most easy to play (low ping) from there location.

But for this I guess I need help from one person doing the Minetest-ping-sort for 10/12 servers and send me the results.

How I will put the server data (ping, name, url, ip, port) into it, is open yet, but text fields are offered there.
Minetest has no future
Post Reply
8 posts • Page 1 of 1