Here is another one:

Those are very cool, thank you. I've really got to get back to work on this.

Hey, I'd like to help out with this mod. It looks awesome, and I would love to play it on a server sometime. I can do some art or programming, but I'm not sure what you need help with. Is there anything you can think of that I can help with?

@Kilarin Any idea when youll pick up this project again? I myself am very interested in the project since 2 or more years ago and would love to see this continue :D
Hey, what can i say? I'm the bad guy.

I got REAL busy and didn't have time for minetest for quite a while. Just getting back into it. If I can get caught back up on how things are working now, hopefully I can get back to work on this. :)

So, if we are thinking about reviving this project. One of the biggest problems I was trying to overcome back when this was active was how to have different biomes generate in the east and the west, and depending on distance from spawn, if possible. Has anything changed in the mapgen that would make that possible now (without going to complete lua gen which would be very painfully slow)

Ah, thank you TeTpaAka! With x, y, and z limits, I think we can pull this off!

I love the concept of this unique game! Especially the concept of esem. I have made a mod called Esemics that adds/extends mese and esem by adding a bit of chemistry to it. It isn't currently using the key features of fractured currently but it would definitely make the west be WAY more wild and I definitely intend to port it to this games features. Just wanted to inform you that someone really wants to contribute something more than logos and has something to show for iit. Next to MineClone 2 this is my favorite WIP subgame.
Would you believe this came from an autistic guy with low vision? Believe it.
Check this out![url]https:github.com/puzzlecube[/url]
I also make models for 3d printing!

Glad you are interested, and I look forward to seeing your esem work!

I'm working on this again, but have developed some wrist problems that are slowing me down. Hope to have an update out soon with something new and interesting. :)

These changes are an attempt to fulfill an early vision I had of Fractured as a multiple layered world something like this: 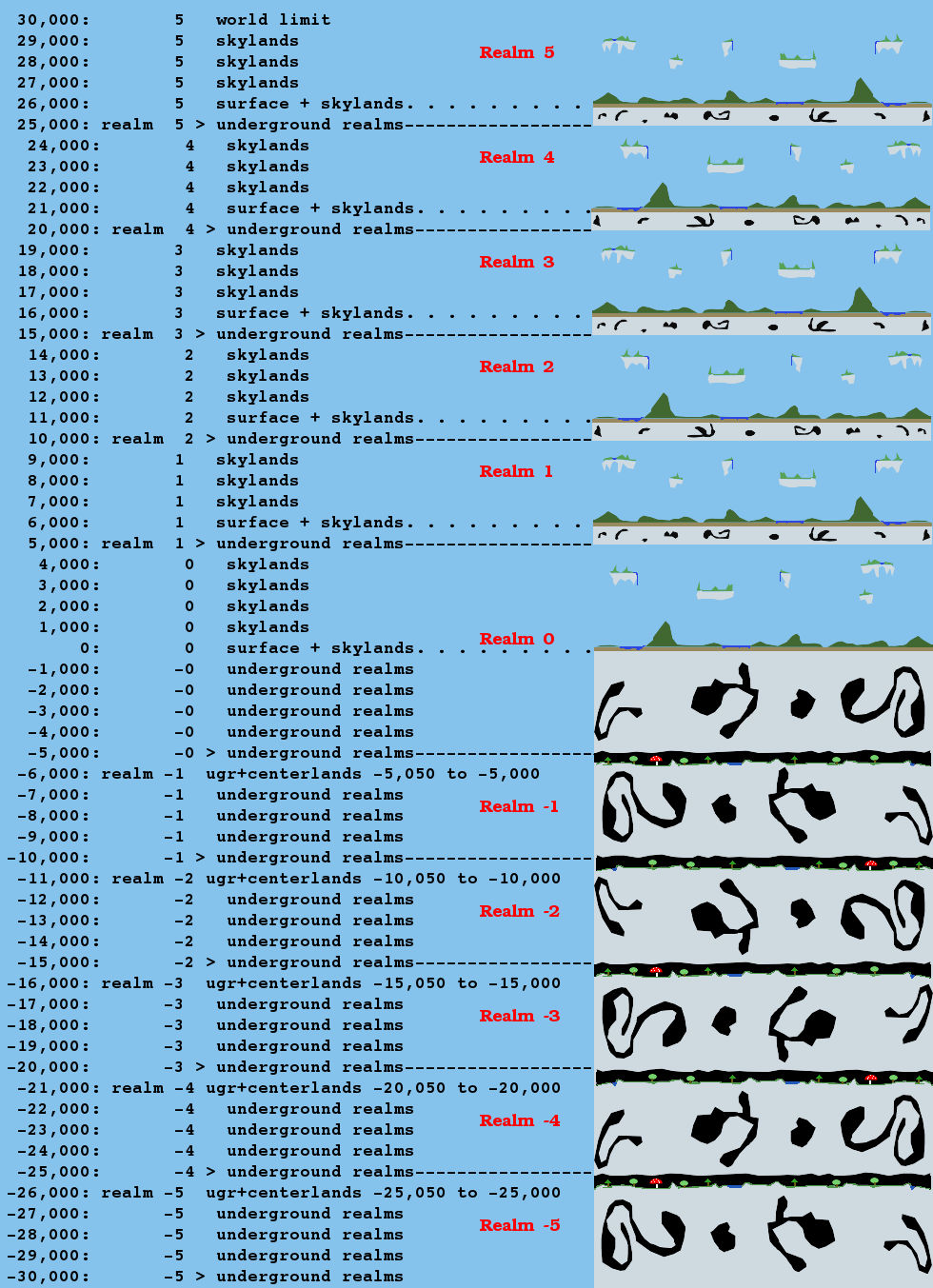 realms is still VERY primitive, not much more than a proof of concept. But it does work, and fractured now has five layers of world above the y=0 surface.

And the primary method of getting to these new worlds will be finding and climbing rare giant beanstalks: 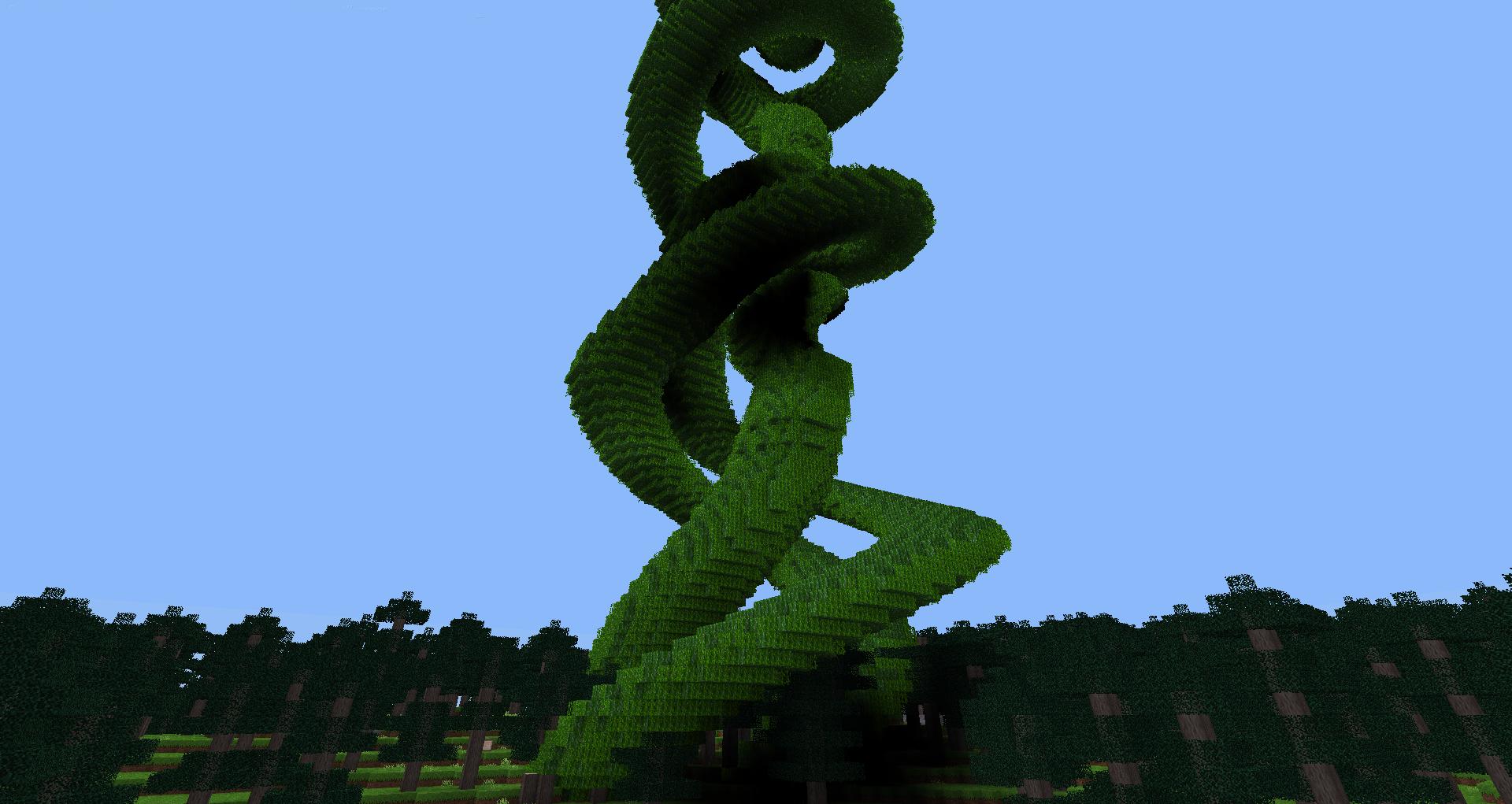 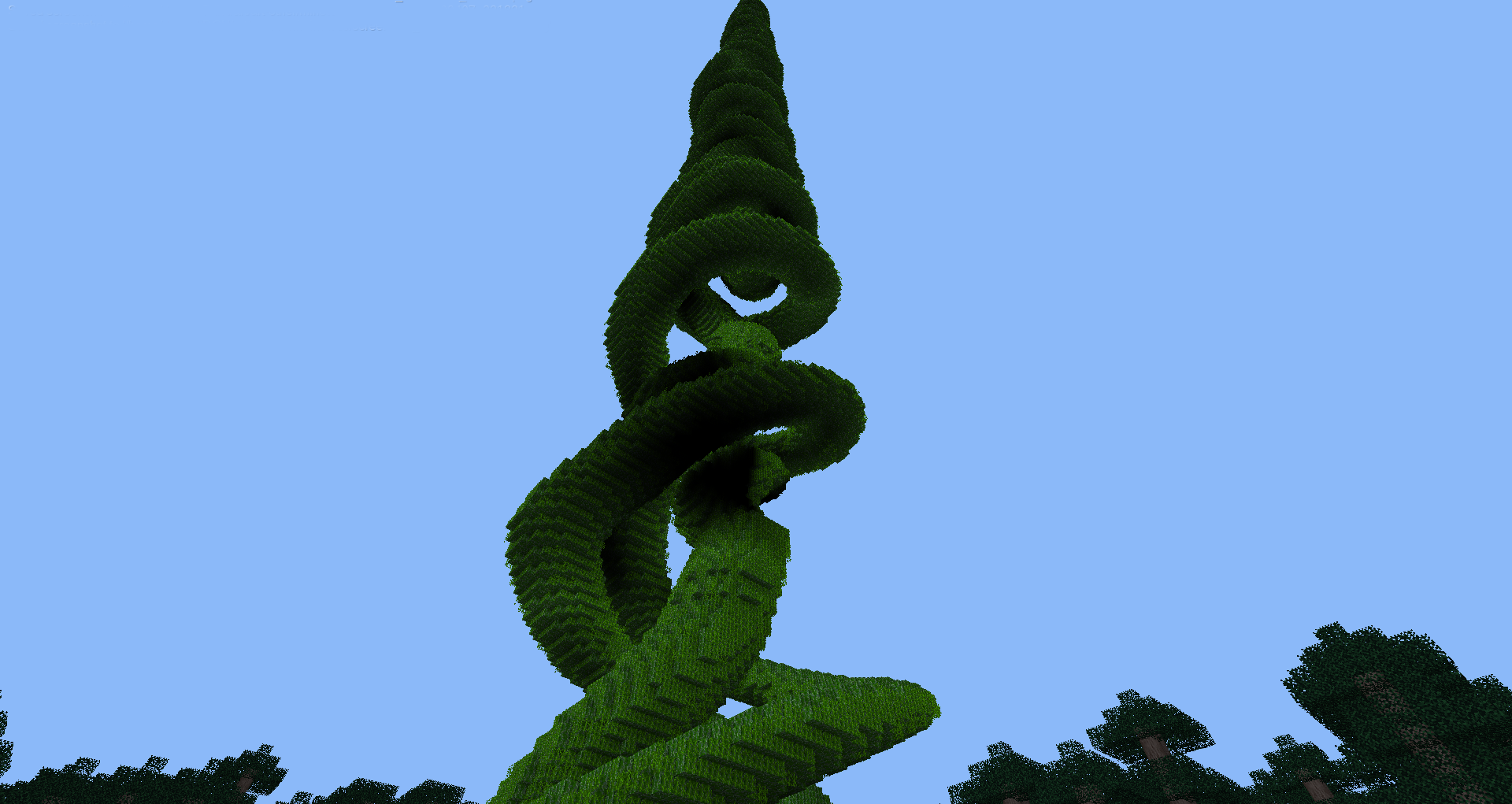 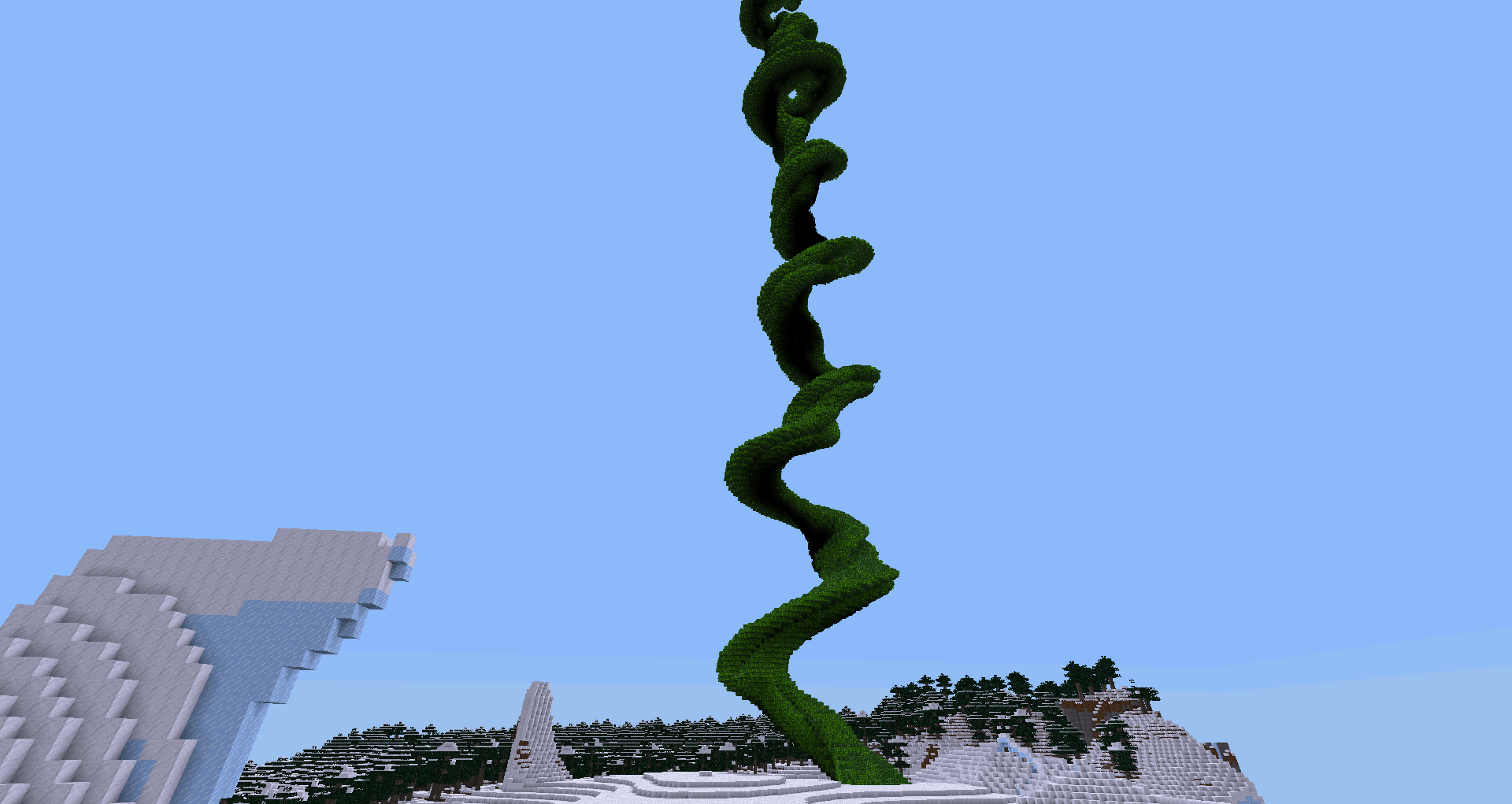 Check out the beanstalk and realms links, load up the newest version of fractured viewtopic.php?f=50&t=11346 and let me know what you think.

Nice beanstalk!
I have to read up on what this game is about.

Oh. These beanstalks are indeed...huge. Though it might be possible to climb one, there's also a high danger of falling down before reaching the next level.

When you spawn them, you ought to use some sort of perlin noise. That way, you'll always know if and where your mapgen is supposed to have a beanstalk. That'll be more reliable than other methods.
A list of my mods can be found here.

Sokomine wrote:When you spawn them, you ought to use some sort of perlin noise. That way, you'll always know if and where your mapgen is supposed to have a beanstalk. That'll be more reliable than other methods.

If you set up for there to be 16 beanstalks on level 1 (y=0) then the world will be divided into a 4x4 grid, with each grid being 16,000 nodes on a side. One beanstalk will be positioned randomly within each of those 16k x 16k squares. The position is random, but the random number generator is seeded based on the world seed and beanstalk level, so any world with the same seed will get the same beanstalks in the same places (which helps a LOT with testing)

The default beanstalk_values.conf file has 16 beanstalks on level 1, 2, and 3. and 9 beanstalks on level 4 and 5. Searching for one beanstalk in a 16,000 by 16,000 node square should be quite a daunting task. But on levels 4 and 5 the beanstalks will be randomly distributed within squares 21,333 nodes on a side. And that will be even harder to find.

I like the idea of beanstalks being pretty rare, but the numbers are completely configurable and can be distributed however you wish.

You can also edit the generated beanstalks file and manually position the beanstalks wherever you want. But the world has to have been generated once for that file to be created.

Perhaps you ought to add a way for players to find out where the next beanstalk is. After all this is MT with its rendering engine, not the real world. No chance to see high, huge objects (like mountains or beanstalk towers) from afar.
A list of my mods can be found here.

Sokomine wrote:Perhaps you ought to add a way for players to find out where the next beanstalk is.

current process, all the game has to do is give the user privs to use /list_beanstalks
In the future of Fractured there will probably be tools or clues that will point you to beanstalks.

What if there were "cloud castles" along the beanstalks? These cloud castles would have giant bosses (in reference to a famous fairy tale) and would need to be conquered in order to go farther up/down a beanstalk.
My best mods: space_travel, time_travel, and rocket.

Red_King_Cyclops wrote:What if there were "cloud castles" along the beanstalks? These cloud castles would have giant bosses (in reference to a famous fairy tale) and would need to be conquered in order to go farther up/down a beanstalk.

Excellent idea! If you'll check out the too long and too boring story in the Beanstalks thread, you'll see that I already agree! :)

I have tested out this game, and it looks very promising. The canyon is a good barrier, the wizard tower is interesting, and the realms are diverse. I could not find a beanstalk, though, so I had to teleport to a realm. How do the realms figure into the story?
My best mods: space_travel, time_travel, and rocket.

Red_King_Cyclops wrote:I have tested out this game, and it looks very promising.

Thank you for checking it out!


Red_King_Cyclops wrote:I could not find a beanstalk, though,

They are meant to be hard to find. But at this stage, I have put in chat commands to make it easier to explore ane test. If you want to see some beanstalks, just use the following commands:

/grant singleplayer all
/list_beanstalks
and then
/go_beanstalk lv,b
where lv,b is replaced with the level number and beanstalk number you are interested in. For example:
/go_beanstalk 1,1 (to go to level 1 beanstalk 1)

Story wise: The universe that was controlled by the wizard and his world stone was bigger and more diverse than almost any of the survivors remember. There were more worlds than just the one, "worlds wonderful, and dangerous, beyond your imagining" Worlds hidden both above, AND below the world of the tower.

Before the fracturing of the universe, travel and communication between these worlds, these "realms", was not uncommon. But when the world was broken, the pathways were lost, and soon, even the knowledge that the other realms existed faded into myth, legend, and rumor.

Our brave explorer(s) will first explore, and exploit, realm 0, the standard surface realm at y=0. But there they will find many limits. Things they want to build that they do not have all of the ingredients for. And strange and mysterious hints about other realms where these powerful items can be found.

The first explorations will probably be downward, because digging down is just really obvious. :) Those who reach down to the y=-5,000 level will discover, not just caves, but a whole new world there, like something out of Jules Verne's Journey to the Center of the Earth. In that world they will find creatures, minerals, and plants that did not exist on the surface. Their power and knowledge will grow. Digging down further will unearth yet more worlds with new things to see and more things to learn.

AND, eventually, the explorers will try to move upward. A task that will be more complicated, because access to the higher realms is far more limited, but the rewards for finding them should be even greater.

The goal here, is to create a world that more fully utilizes the vertical space available in Minetest. A world where as soon as the player gets bored with one level, they can work their way to another one and find new challenges, new rewards, and new things to see.

That's the goal anyway. But progress is slow. <sigh>
I got realms where it is now easy to customize for different games. I'm working on realms customized specifically for fractured (instead of just designed to demonstrate what realms can do)

And of course, the whole thing is still going to have a problem of being rather slow, since it will depend on lua mapgen. But I do not know of any other way to achieve the unique look and variation I'm hoping to achieve here.

Again, thank you VERY much for taking the time to look at this very incomplete project!
Post Reply
149 posts